The Weekend Is Here!

The best part about retirement is that you don’t have to worry about getting caught for doing nothing.

What? Can it be? It’s wet outside; not quite rain but undoubtedly wet!  We know it is supposed to be raining on Monday but this early?  We need all we can get, so it is OK! 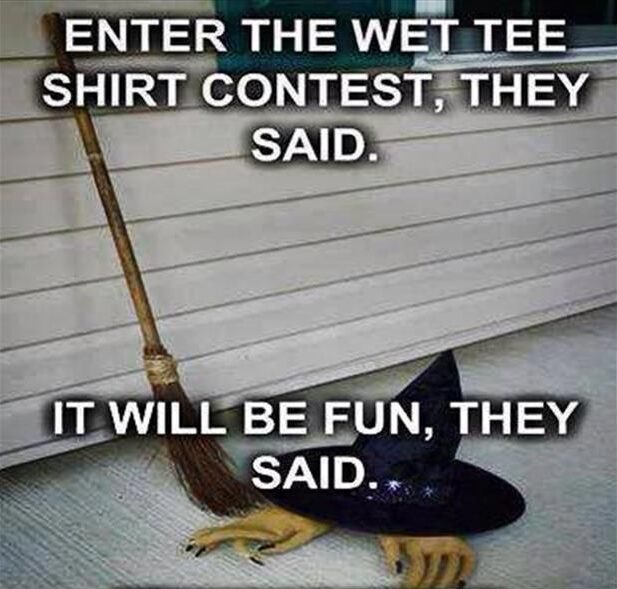 Late at night, when Mother Nature calls, I go back to bed and look at the app called SkyView. It is fun to watch the planets and other objects move about the sky! Below are the Moon and Neptune, which happen to be below the horizon this morning.

I love my app; I can always find the moon!

I went back to sleep and then woke up to a wet yard!  The rain came early.  Mary joined me in the kitchen for the surprize so I asked her a question!

Q: What do you call it when it rains chickens and ducks?
A: Foul (fowl) weather. 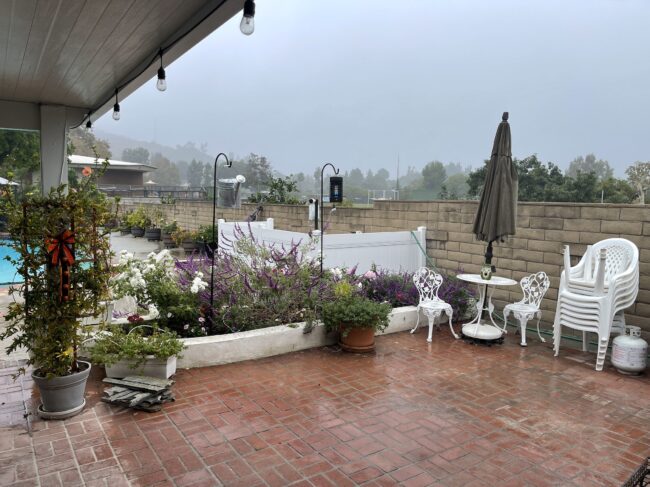 The weatherman said it would clear up by mid-afternoon!

Scout did go outside and do his business, but he skedaddled right back inside looking for a dry towel. 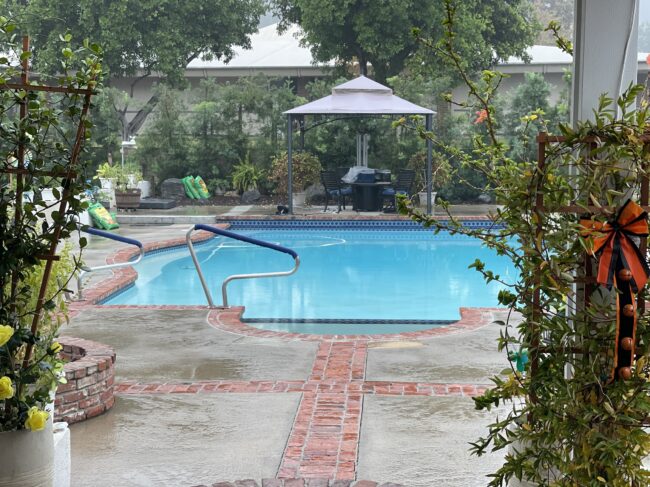 So we have been in the house several months now, and I must say Mary does need a little help with the dusting activities.  The cobb webs have taken over the fireplace. 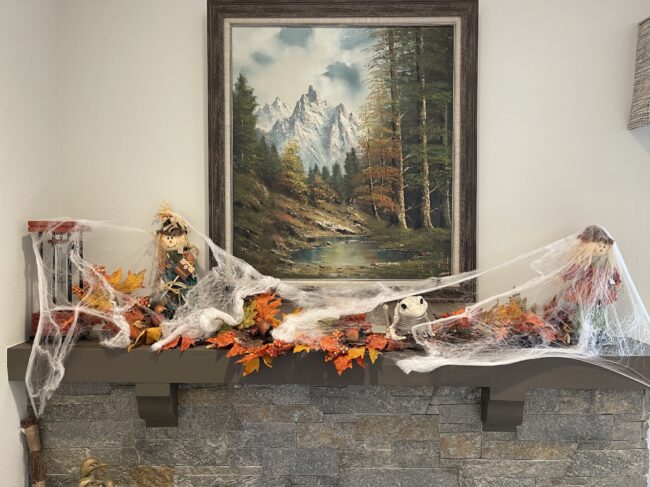 Mary needs a little assistance with housekeeping; the cobwebs are getting out of hand.

Did You Know? As it turns out, the majority of cobwebs actually consist of abandoned spider webs!

Web-building spiders create elaborate webs for catching prey (wandering spiders chase after their prey, rather than building webs). Over time, however, mechanical stress and dust accumulation weakens the web, forcing the spider to abandon it and build a new one. That’s why you never see a spider on a cobweb, even though the eight-legged arachnid is responsible for its creation!

The word cobwebs comes from Old English, coppeweave, and originated sometime in the 14th century. Coppe comes from attercoppe, which means spider or literally “venomous head.” Web also has its origins in Old English and means tapestry or something intricately woven.

Then it hit me, or perhaps better stated, she hit me and reminded me it was Halloween.  So, we will just live with the cobwebs for another couple of weeks! 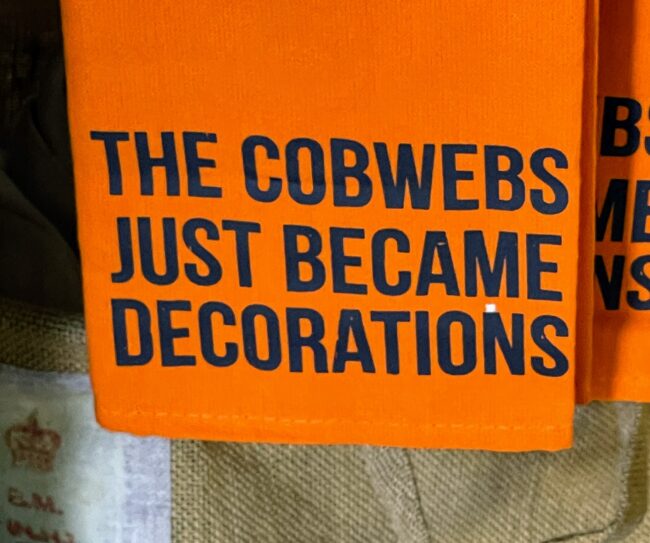 Mary quickly pointed at the new Halloween sign! What can I say?

Even Scout is worried about all the spiders lurking around the house.

Q: Why did the spider teen get in trouble with his mom?
A: He spent too much time on the web. 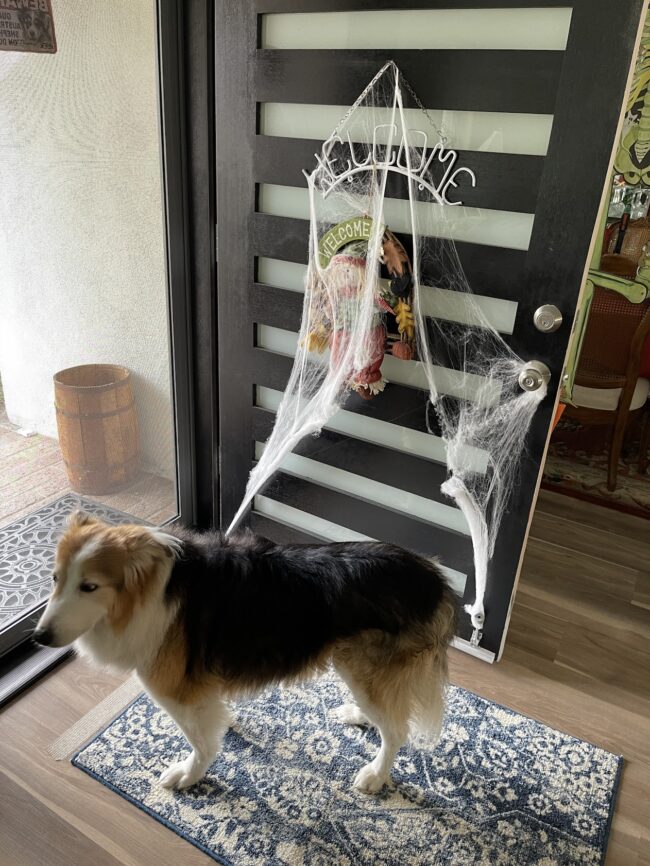 “What are all the webs about Dad?”

Now we are getting serious about pumpkin carving.  We decided this year we were doing pizza at home, so we are tasting local pizza joints knowing we have First Class Pizza to fall back on! Dianne suggested Zito’s, but she did not tell us it was hidden away in the back-streets of old-town Orange.  We walked for hours, trying to find the place.  Finally, we spotted the door down a dark and haunted alleyway; I suggested Mary go first! 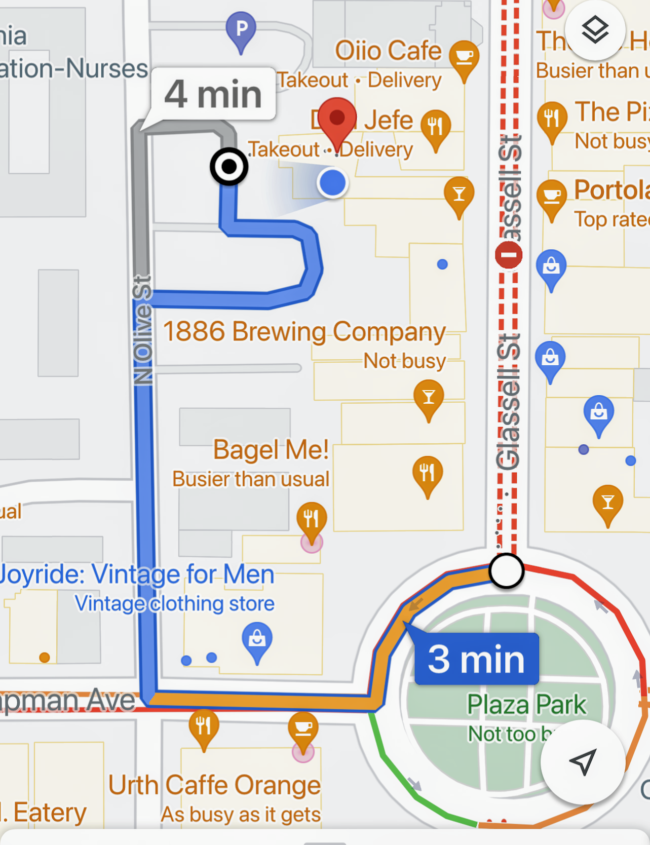 We walked forever to find the pizza place, well hidden.

Zito’s be the place.  We had a glass of wine (after all, it was almost 9:00 AM) with our pizza.  OK, it was afternoon!  The pizza was excellent, so it is on the possibilities list! 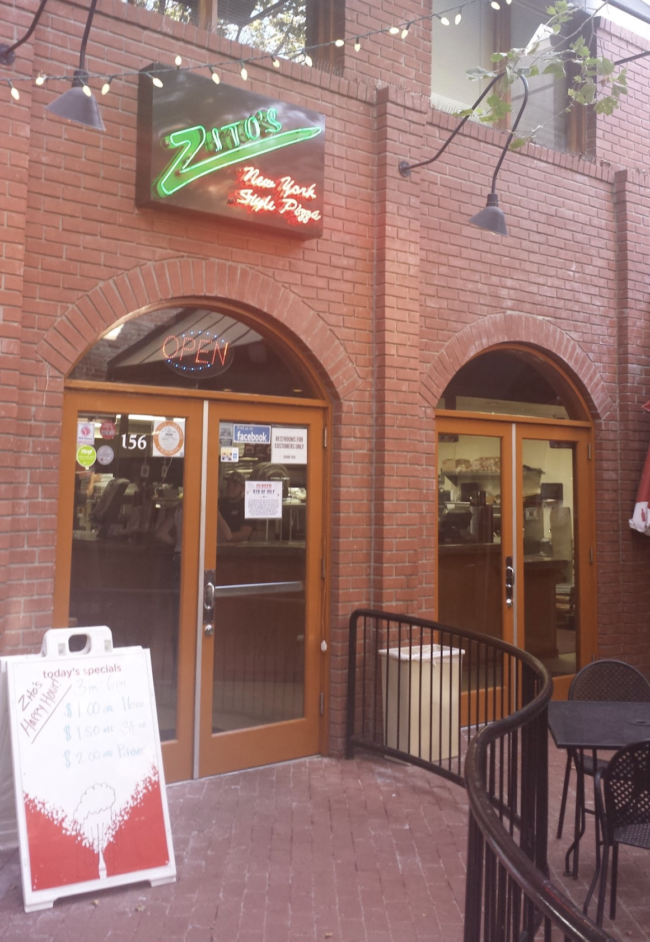 We were good and ordered a small pizza, two chunks each!  That was excellent as we could have chewed down a larger one quite easily.   I asked Mary, “What do you call people  who don’t have an affinity towards pizza?” She looked puzzled, so I, with great trepidation, answered, “Weirdoughs!” 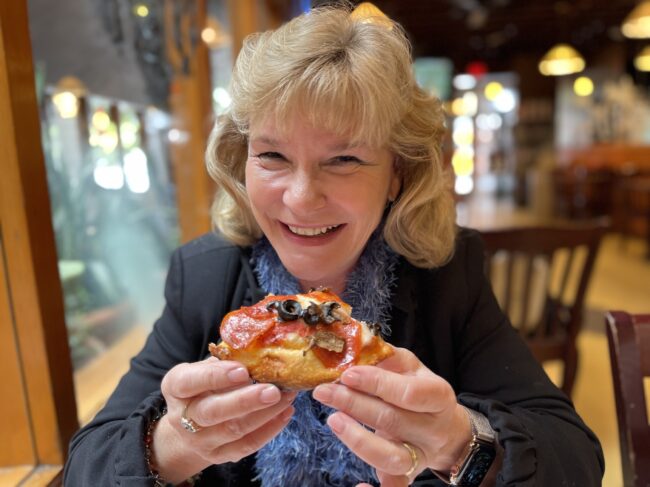 Yes, it is a selfie.  Mary was so busy downing the pizza she could not snap a shot! 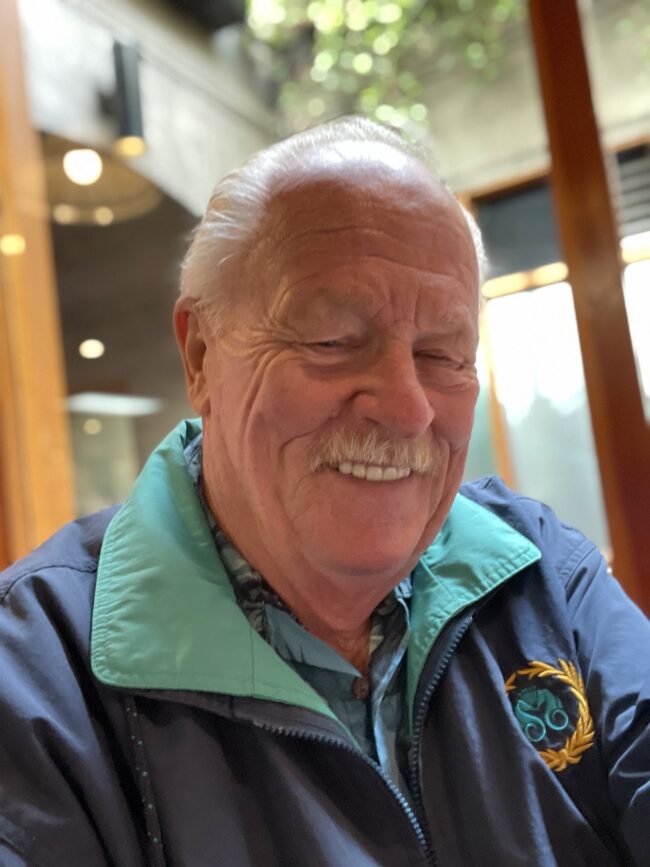 I was having too much fun!

Then it happened!  Someone put bubblegum in her pizza.  It was horrible when the gum snapped, and the pizza went flying across the room, landing in a large brown of soup being eaten by a rather significantly sized football player.  I jumped into action, pointed at Mary, and told him she likes to throw her food when we go out. 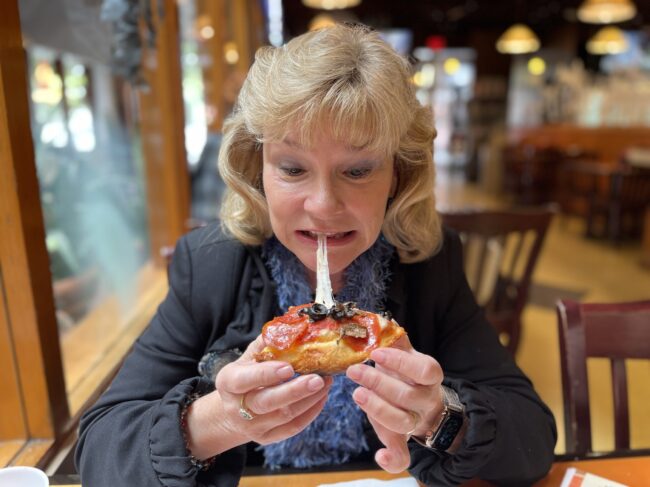 There were strings of gum and cheese everywhere.

We made a hasty retreat, leaving via the back door just under the speed of light!

We walked next door to a bit of shopping at a store that sold exciting goodies.  There was a sign that mentioned something about “No Shoplifting,” and then we spotted the side yard; needless to say, we were very honest!  We did not want to end up like the last people! 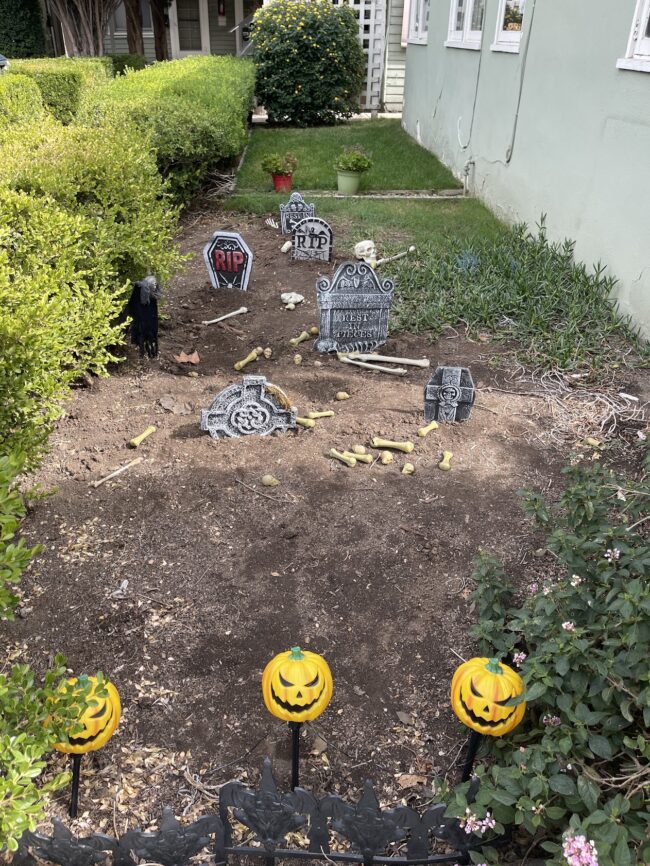 The back alleys of Orange are awash in spooky things.

Great goodies were available for sale.  The sign below was for Scout, but we realized he openly speaks Australian, and of course, the sign was in English, so he would not understand it.

We got the feeling we were being watched.  We were right; the tree was staring at us.  I thought it might bark, but it didn’t make any sounds that we could hear! 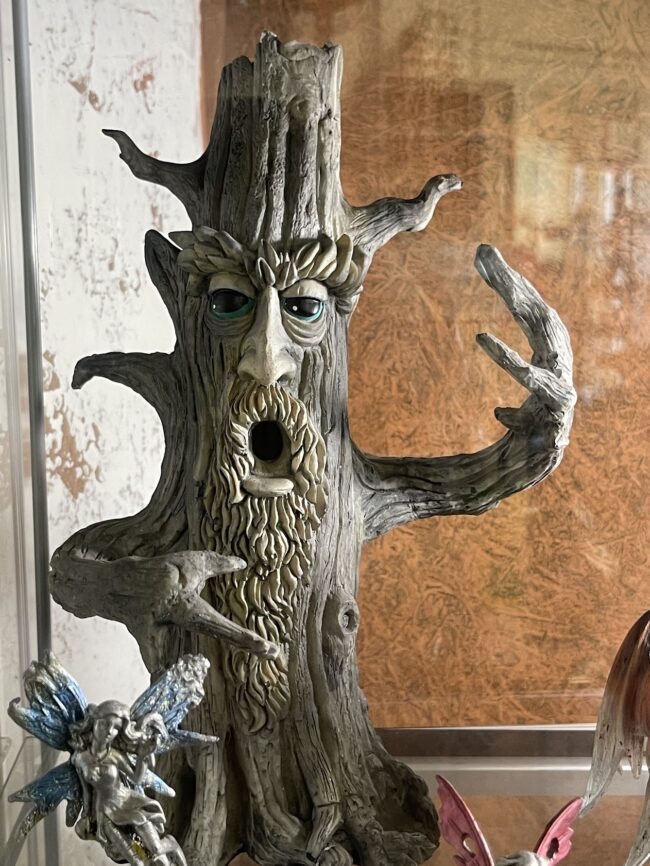 A fascinating man wanted to go home with us.

We bought some goodies, including little gifts for Bob and Donna plus Robin.  Well, while I was paying for the goodies, Mary wandered next door to Rudabagor’s Restaurant, and who was sitting there having lunch?  Bob and Donna.  Finding them was good as we did not have to carry the presents back to the car! 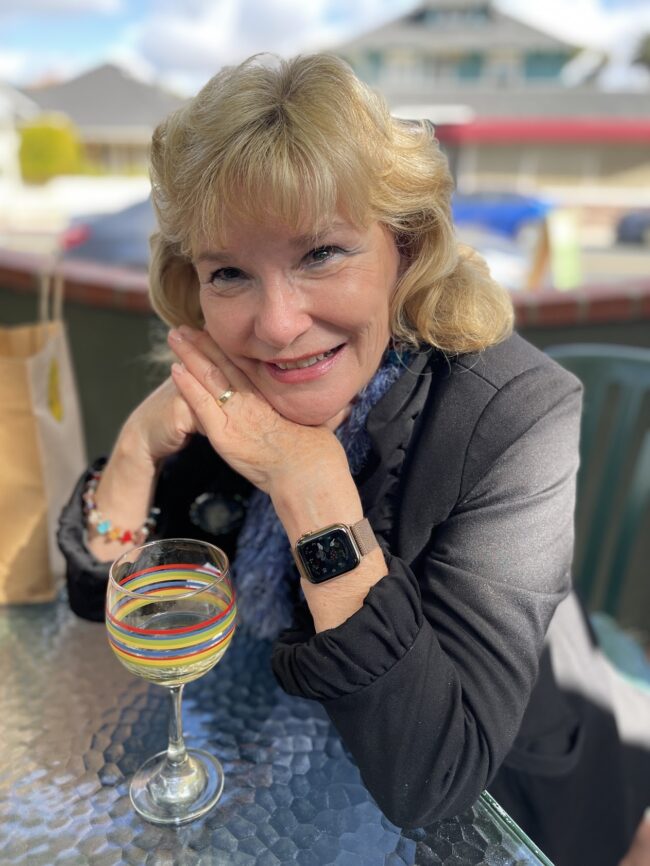 Drinks with Donna and Bob a little early.

We joined them in a glass of wine before we all departed for the afternoon know owing we were going to see each other again at 6:30 at Renada’s!  We walked inside the restaurant, and it was pretty nice. 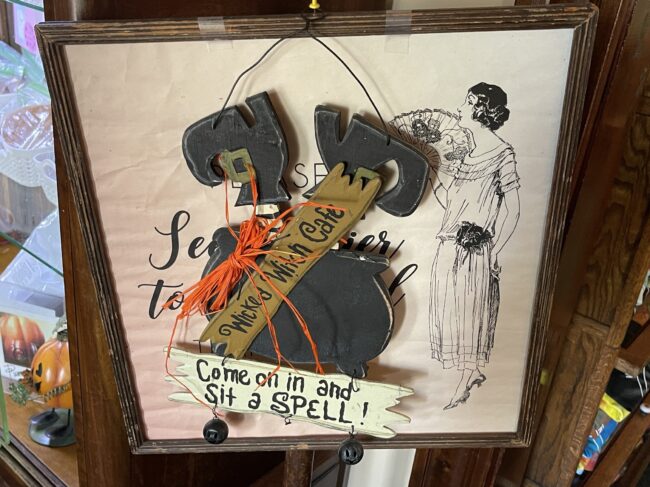 Rudabagor’s has a fantastic menu.

We spent some time on chores around the house, including hanging up pictures and reading the instructions for the gas logs!

The time was 6:00 PM, and we headed for Old Town Orange for dinner.  Traci and 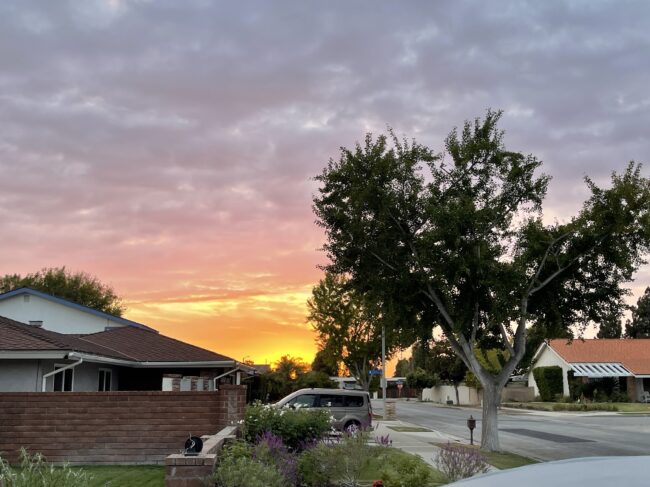 Time to depart for dinner.

Dinner was terrific! It was great to have Traci and Robin join us; always a hoot! We had another present for Bob and Donna, and they gave us a beautiful wedding present.

The restaurant was Italian, and of course, Bob had to ask his questions of the day!

Q. How does an Italian get into an honest business?
A. Usually through the skylight. 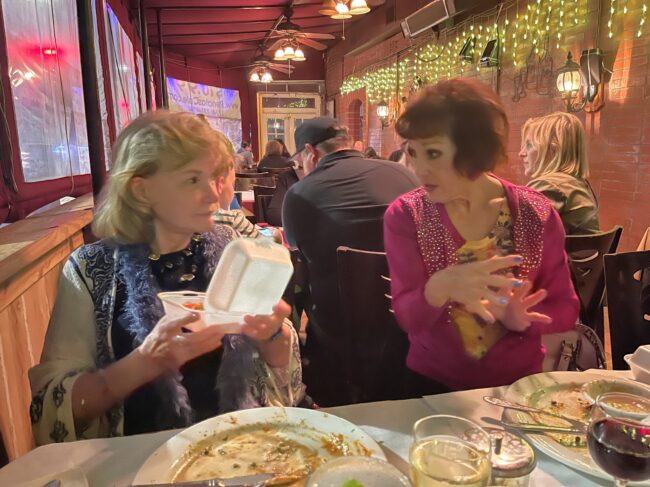 Traci, Robin, Bob, and Donna joined us at Renada for a beautiful dinner!

We put the wedding present from Bob and Donna tight in the middle of the dining room! 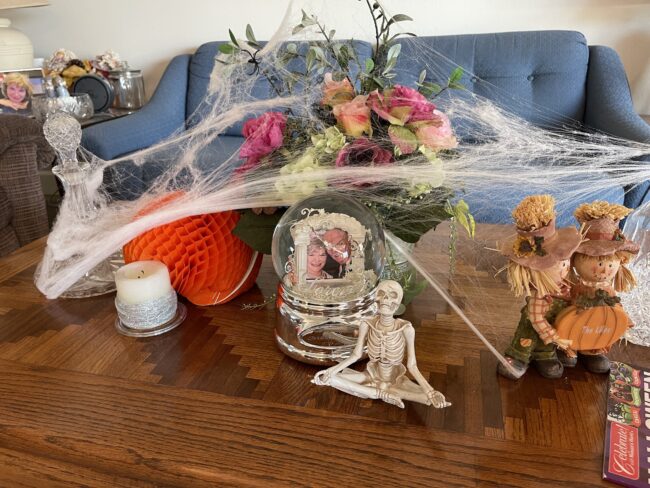 The snowglobe is beautiful!

We are blessed to have such a wonderful family and friends; thank you, Bob and Donna, for being our dear friends! 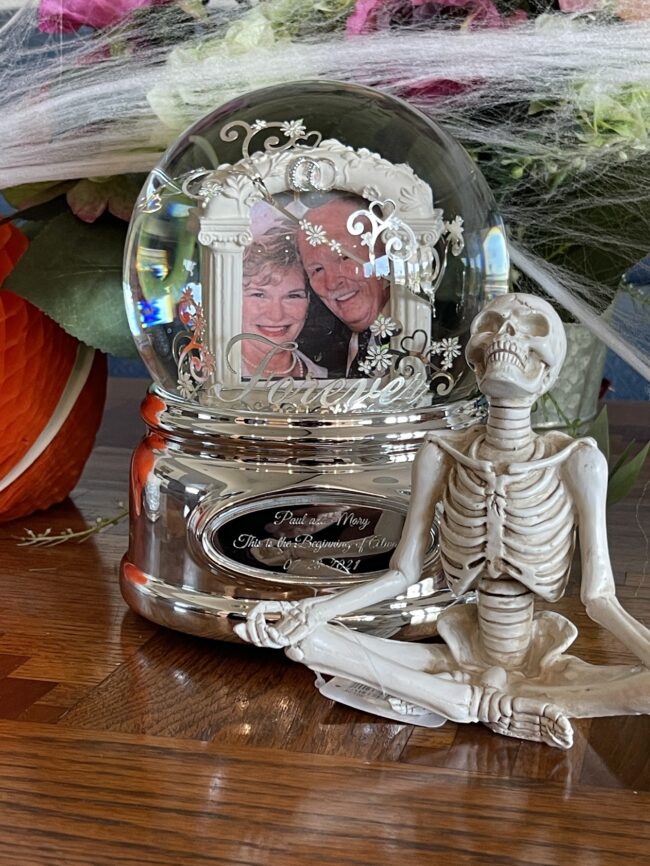 The inscription says, “Paul & Mary; This is the beginning of always!”

After getting home, we crashed; after all, it was past 9:00 PM.  Tomorrow we are going dancing at the Elks and celebrating the fact Mary is NOT working Monday!

Just an old retired guy trying to finish out my last years on this planet. I lost my best friend and wife in early 2020. I was blessed again by reconnecting with Dr. Mary Côté, a long-time friend. Mary and I got married July 28th, 2021, and are enjoying life together and plan to spend the rest of our lives being a blessing to our friends and family.
View all posts by Paul →
This entry was posted in Dining Out, Food and Wine, Friends. Bookmark the permalink.