Eight More Days And She Is Free!

Retirement is like coming home one day and telling your husband, honey, I’m home… for good!  Now that is frightening!!

We changed the bedcoverings to a down cover last night; we were toasty.  In fact, I had to throw out my feet a few times to keep from overheating.  Fall is here; yeah, bring on the rain!!

I made a significant decision to rename my “To-Do” list to my “Opportunities” list. Then, each day is a treasure chest filled with limitless opportunities; I could take joy in checking many off my list.” 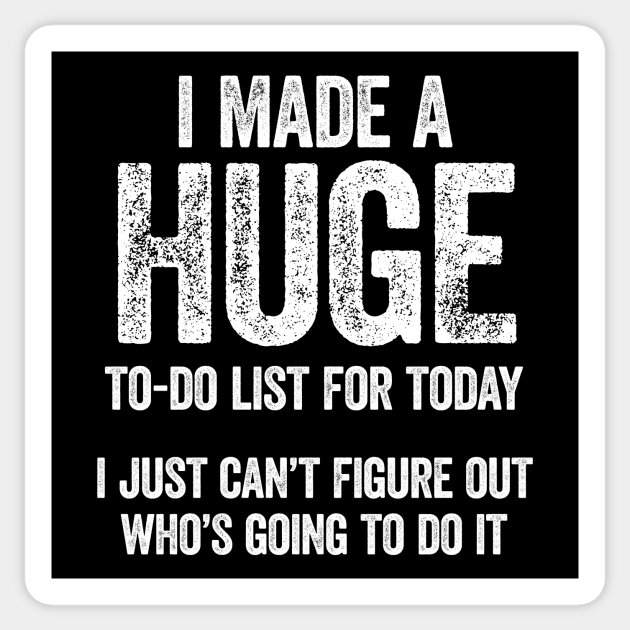 We could not find the Duvet, so we ordered one last night from Amazon, and it arrived Saturday!

Did You know? A duvet; from French duvet  or ‘down’) is a type of bedding consisting of a soft flat bag filled with either down, feathers, wool, cotton, silk, or a synthetic alternative, and is typically protected with a removable cover, analogous to a pillow and pillowcase. Sleepers often use a duvet without a top bed sheet, as the duvet cover can readily be removed and laundered as often as the bottom sheet. Duvets originated in rural Europe and were filled with the down feathers of ducks or geese. The best quality feathers are taken from the eider duck, known for its effectiveness as a thermal insulator.

The word Duvet is of French origin, meaning “down.” Its first known mention in English came in 1759 when Samuel Johnson used it in one of The Idler’s essays. In Australian English, a duvet is also called a doona. In American English, it may be called a comforter; however, a comforter is usually a slightly different type of bedding that is not as thick, does not have a cover, and is often used over a top sheet.

We walked Five Miles this morning which takes us about 20 minutes for 0.8 miles.  That is not too bad, considering Scout has to stop every eleventh step and sniff his surroundings and piddle to mark his territory! 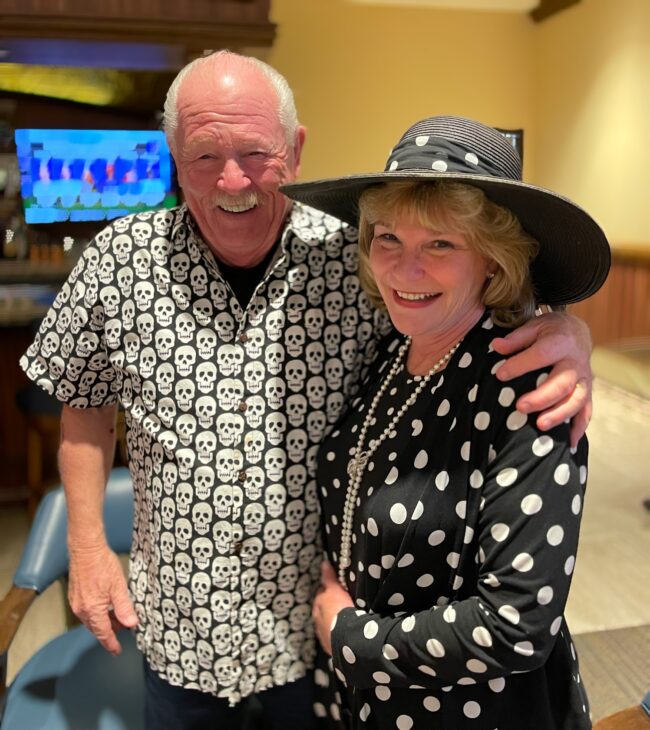 Mary and I are off to work!

Mary has a full day today.  Her retirement letter went out and people are scrambling to come to see her! That is good and bad!

I have several items on the to-do list! Mary had right of refusal and most of the items were eliminate; there goes my fun for the day! 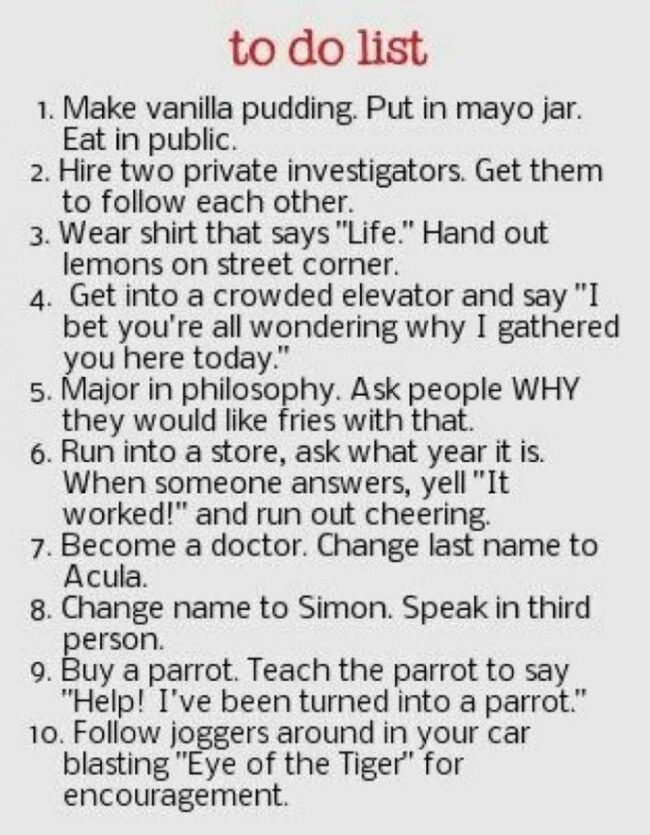 OK, time to be serious. My list included getting pumpkins, going to the market, and getting ready for the 30th when the whole family is coming to visit and do our annual pumpkin carving.

I began the day by getting ready for Mary to come home to me tonight!  I cleaned up everything, did some wash, did the dishes, put a doorstop on the door (cussing the cheap Chinese screws that strip if you look at them), and a myriad of other little things. I save the biggies for the afternoon like the BBQ redeux.

Our mason brought us a bag of little bitty lemons; I opened one up, and they are delicious! These are Meyer lemons from a tree that is overproducing and therefore dropping some fruit early.  The taste is outstanding! I’ll see frozen lemon juice soon! 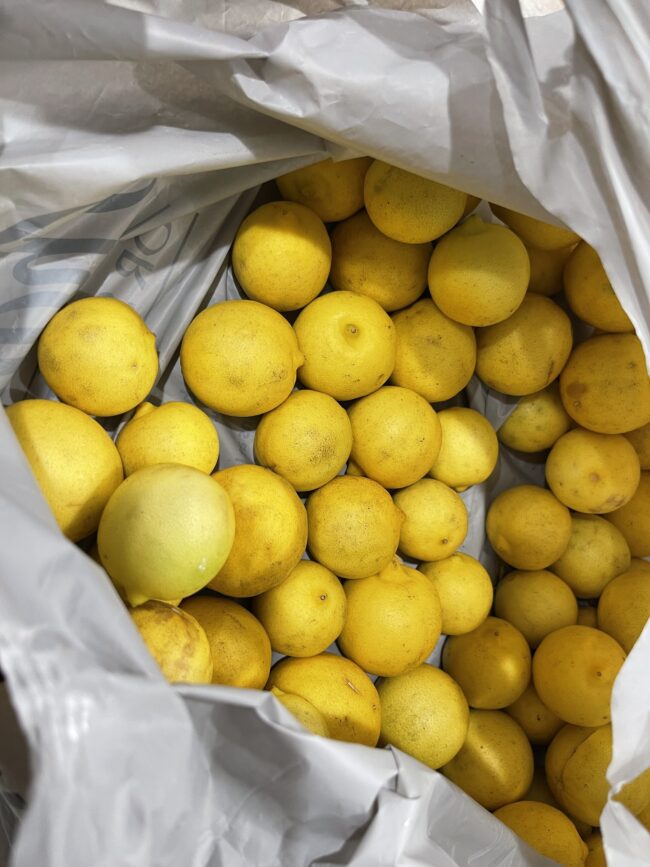 We had BBQ’ed all summer long, and the poor BBQ’d burners rusted out, so I ordered a replacement set from Amazon.  The kit consisted of new burner tubes, new crossover channels, and a set of flame tops.  It was not too hard to do except for some of the screws being brittle and breaking when attempting to remove them.

Before every barbecue, I tell myself I’ll eat healthily and stick to the salads.  But then my plan takes a turn for the wurst.

My grammar may be poor, but my grilling is impeccable.  I’d steak my reputation on that. 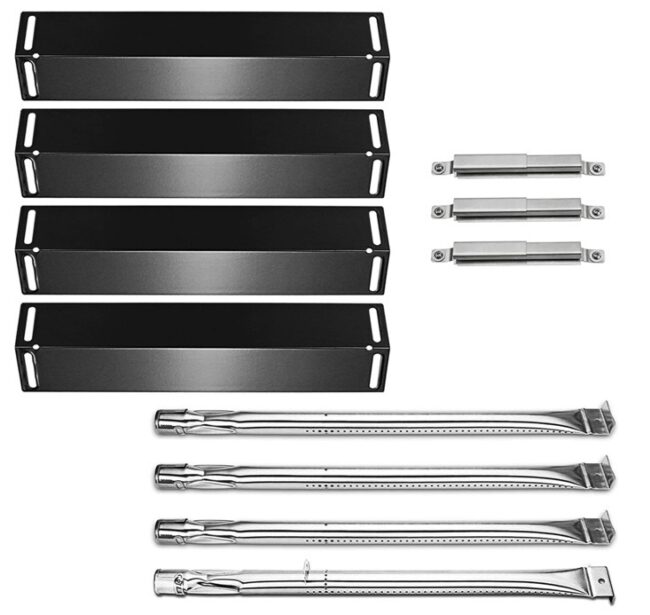 The job was a little dirty as the BBQ had years of crusty material at the bottom, but a wire brush took care of that!  I had the BBQ back to its original condition in about an hour, putting out vast quantities of heat and looking pretty good!

I did have to go to Home Depot and get some stainless steel screws, but other than that, it went well! 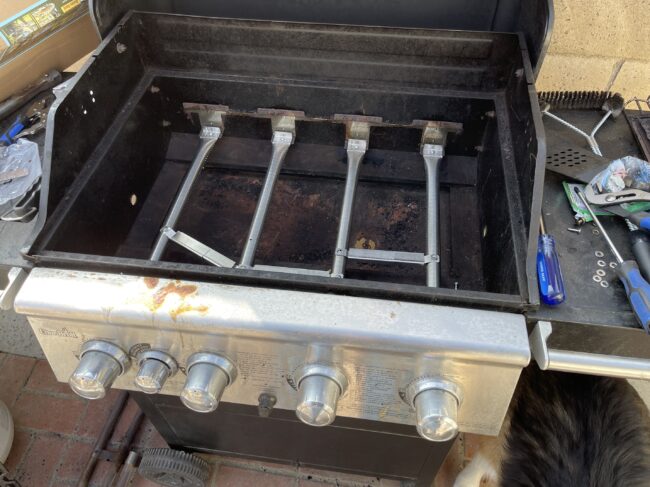 The BBQ is now rebuilt and ready for action!

Scout was happy that his poppy was getting the grille ready.  He thought in his little pea-brain that he was getting steak tonight!  Ha, we fooled him! 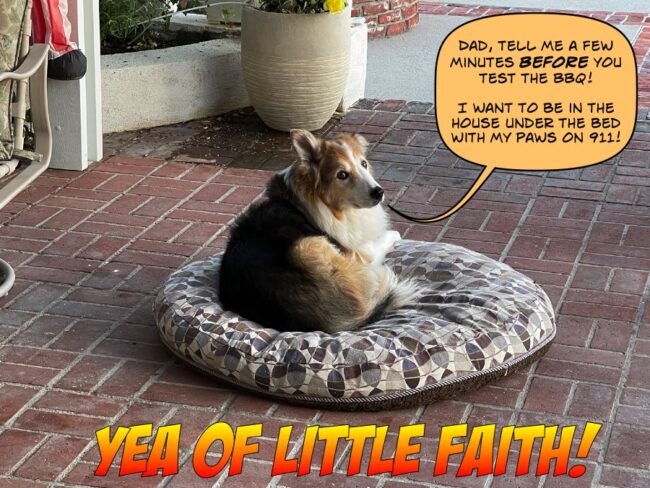 Scout (a.k.a. Five Miles) loved his yard.  This afternoon, the gardener/landscaper dropped by, and I had him trim all the trees in the back yard to the same height so they would fill out lower down in the tree.  They looked pretty good after he was done! 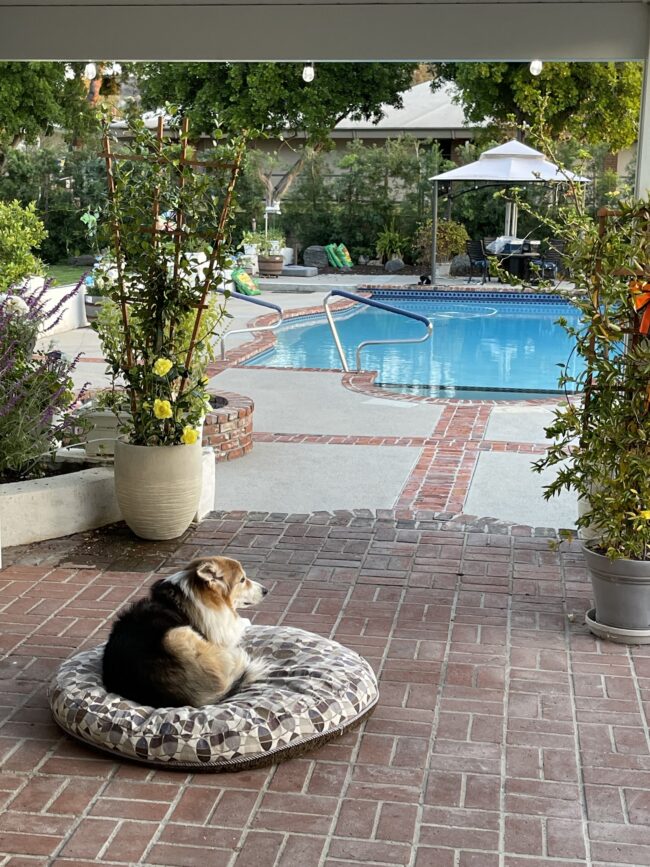 The mason finished off today, and we have a fireplace.  We can have a fire in it tonight, but we plan to wait until Sunday to make sure everything is dry!

I asked Mary, “Which English King invented the fireplace?” It was painful, but I had to tell her, “Alfred The Grate.”

If that weren’t bad enough, I asked Mary, “What do you call a woman who puts her credit card statements straight in the fire?” She gave me this PLEASE STOP look!  I didn’t stop; I blurted out, “Bernadette.” 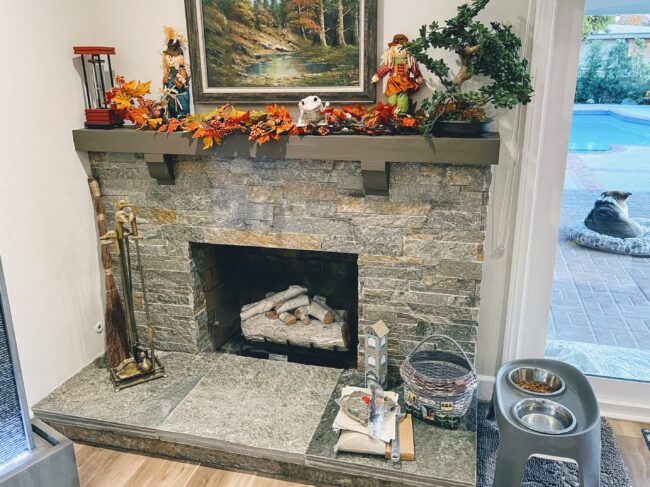 The grey tones are a perfect match for the flooring!

As I mentioned yesterday, our beautiful fountain came inside and has a place of honor adjacent to the fireplace.  I plan to, but a remote Alexa connected plug on the fountain to turn it off/on remotely and put it on a timer! 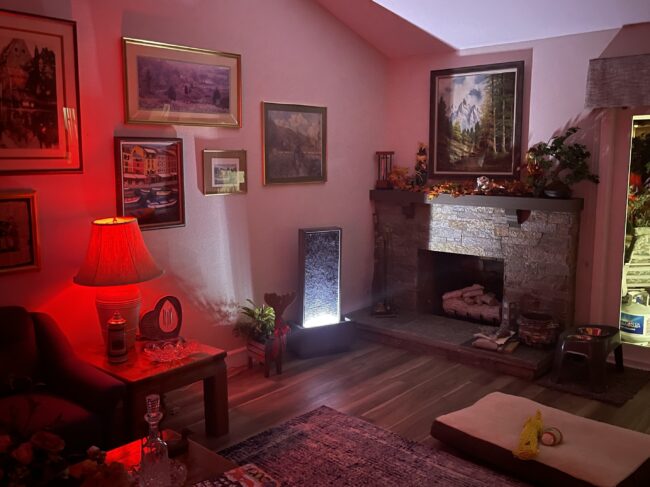 Looks great with the waterfall inside!

We were going to go out for pizza and try out the place, but after arriving home at 6:30 PM, Mary was too pooped to pop, so we got into our jammies and watched a movie instead.  We had chili, and Mary had granola; we are eating light these days!

I thought I heard something in the backyard so I sent Scout out to investigate! 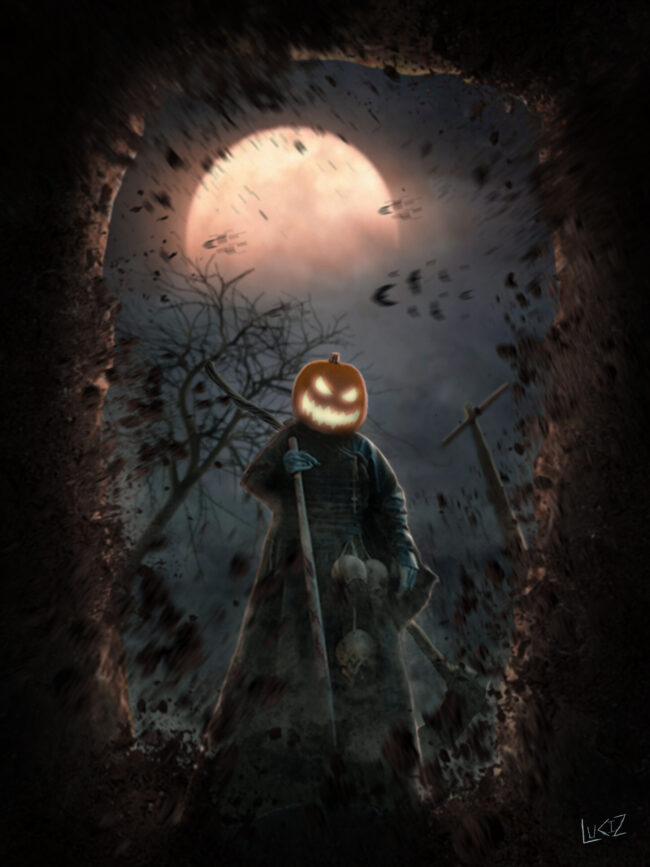 That was a mistake; he ran back inside and wanted to sleep with us!