I was putty in her hands, and my greatest fears we reduced to nothing when she would say, “Let’s ride the Skyway over the OC Fair, please!”.  Four thousand feet in the air, hanging by a thread, moving at 50 miles-per-hour and blacktop below us, it was terrifying!  She smiled, I hide my fright but I did look a little odd with my shirt pulled up over my head.

Sue was fearless, the higher and faster, the better for her.  After thirty years, I got used to it and managed to get on the rides with nary a whimper!  I love seeing her smile through my tear-filled eyes, and I remember her holding my hand tightly, whispering, “It’s OK, this too will pass”.

I love you, my dearest Sue! 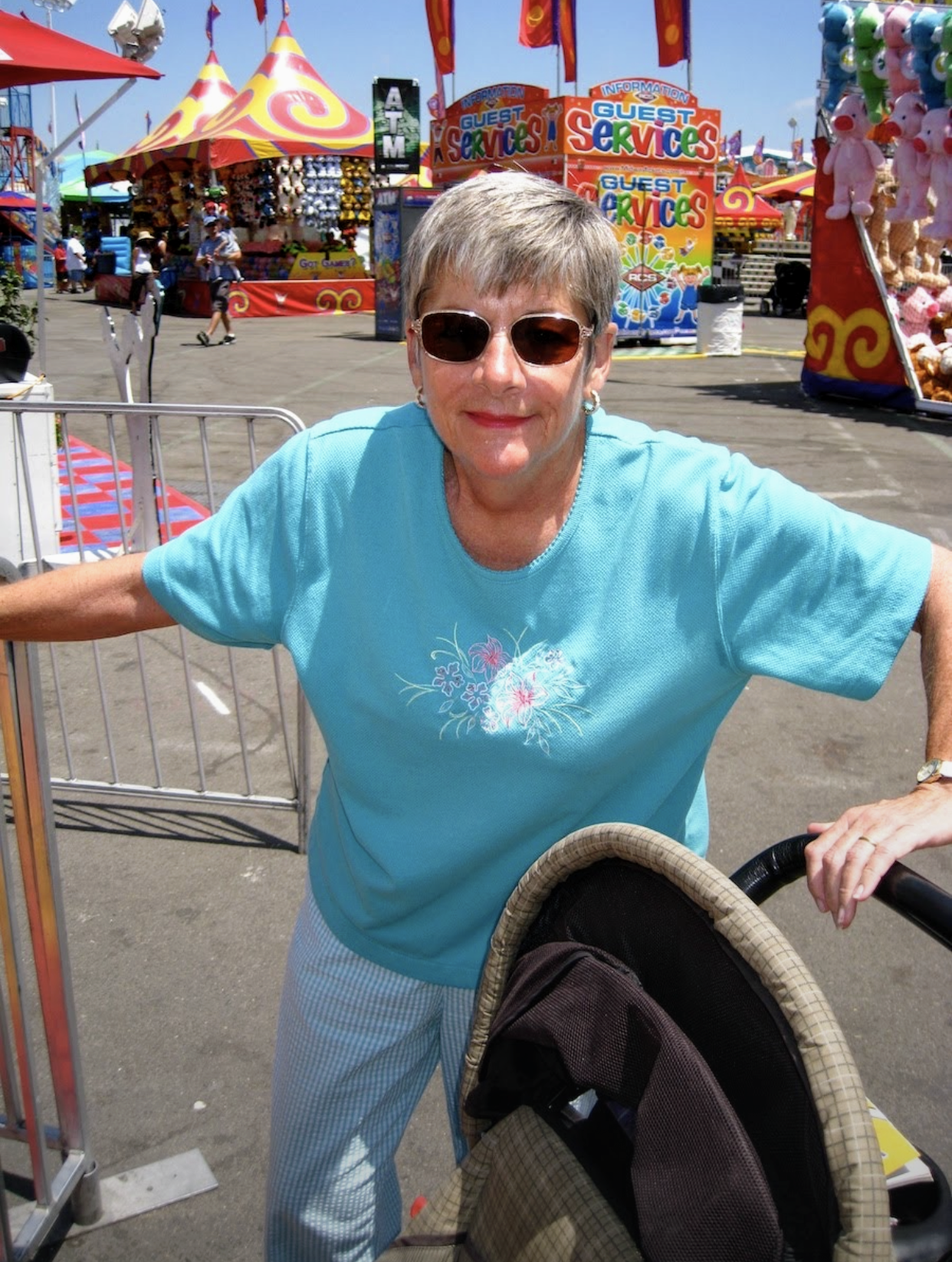 She has talked me into riding the skyway at the OC Fair, again!

This song keeps going around and around in my head!

Today was slow as the morning highlight was going to the hardware store and then to the market.  The Silver Lady got a chance to run up the freeway, and she liked that a lot, especially leaving other cars in the dust as her mighty V-6 churned out the power.  The trip was taken as 5/64th steel rods were needed to adjust the springs on the new gates.  The old eyes looked high and low and almost gave up before a lightbulb went off!  Duh dunny, buy a 5/64ths drill bit!  Voila, problem solved.

Colleen and I talked via the Bat Phone for quite a while.   She was using the labeling printer I sent her, and it operated quite well, according to her. She was assisting Jax in getting out notes to everyone for their assistance during the last several months.  BTW, my great-granddaughter is doing just fine!

The first chore today, put the springs back in operation on the new gates, now they close automatically.  The drill bits worked. Two hoses needed attention, so they got fixed with the goodies obtained from Lowe’s. 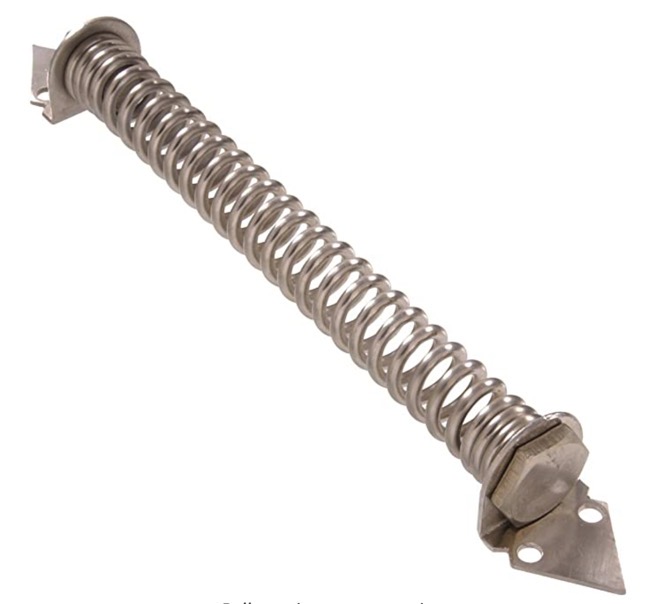 The drill bits were used to turn the spring to adjust the tension before the locking tab was put into place.

Hunger raised its ugly head, so the new iron skillet came out, and a hamburger patty landed right in the middle of it.  Ten minutes later, with the addition of fresh tomato slices, brown mustard, blue cheese, some pickles, and fresh lettuce, the best burger in town was ready to go!

I rested for a bit and watched a StarTrek movie on IMDB streaming, so that took a couple of hours.  As a time-waster, it was pretty good but certainly not one of the better films.

Time to get cleaned up and get ready to go to Amy and Joe’s home for a birthday celebration, dinner, and a movie.  Charlie is now thirteen years of age.  Time seems to move so fast. 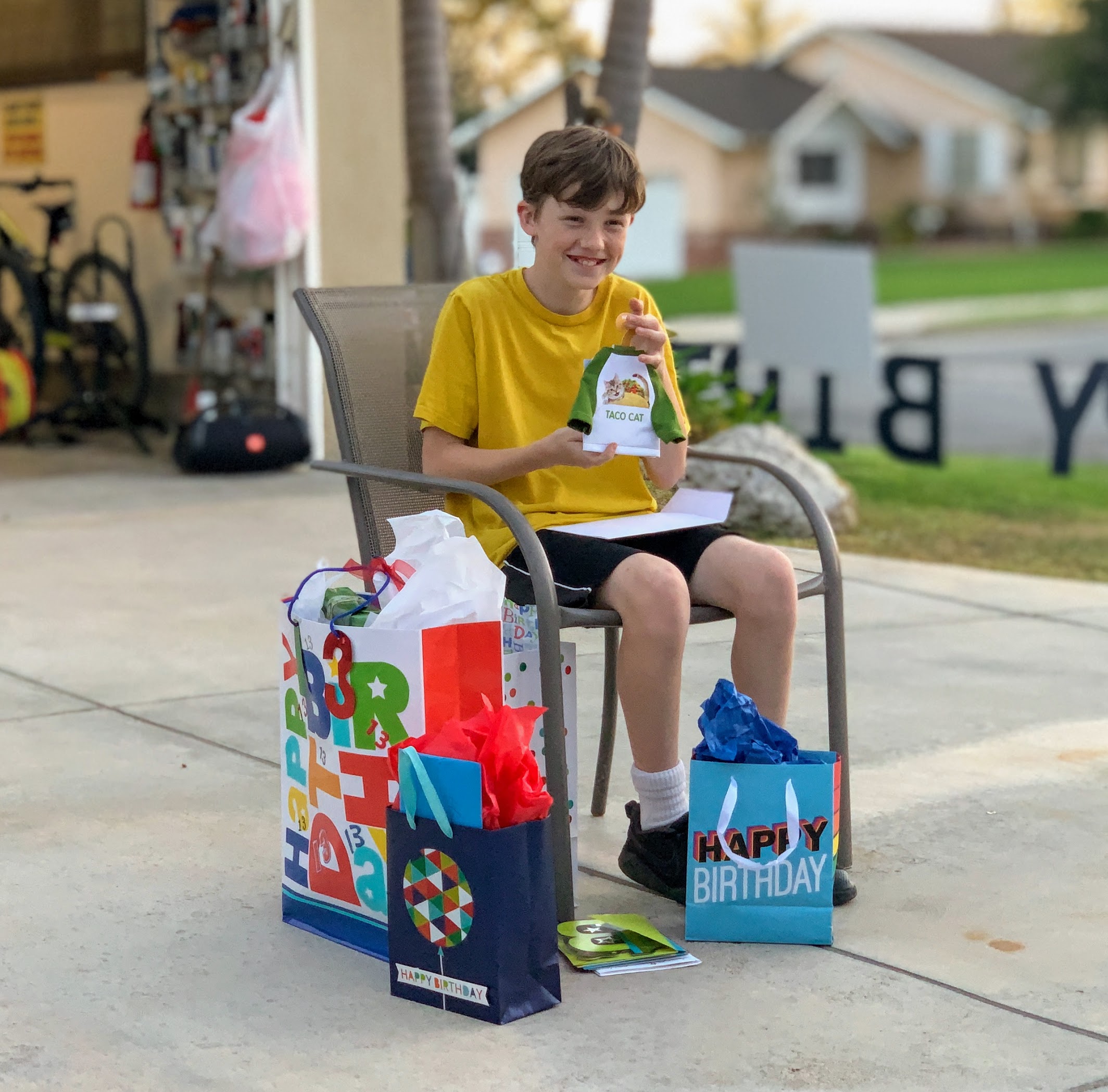 Usually, the cake’s candles would be blown out while on the cake, but alas, the tradition changed this year with the pandemic in full swing.  Charlie did well; the candle is out; let’s eat cake! 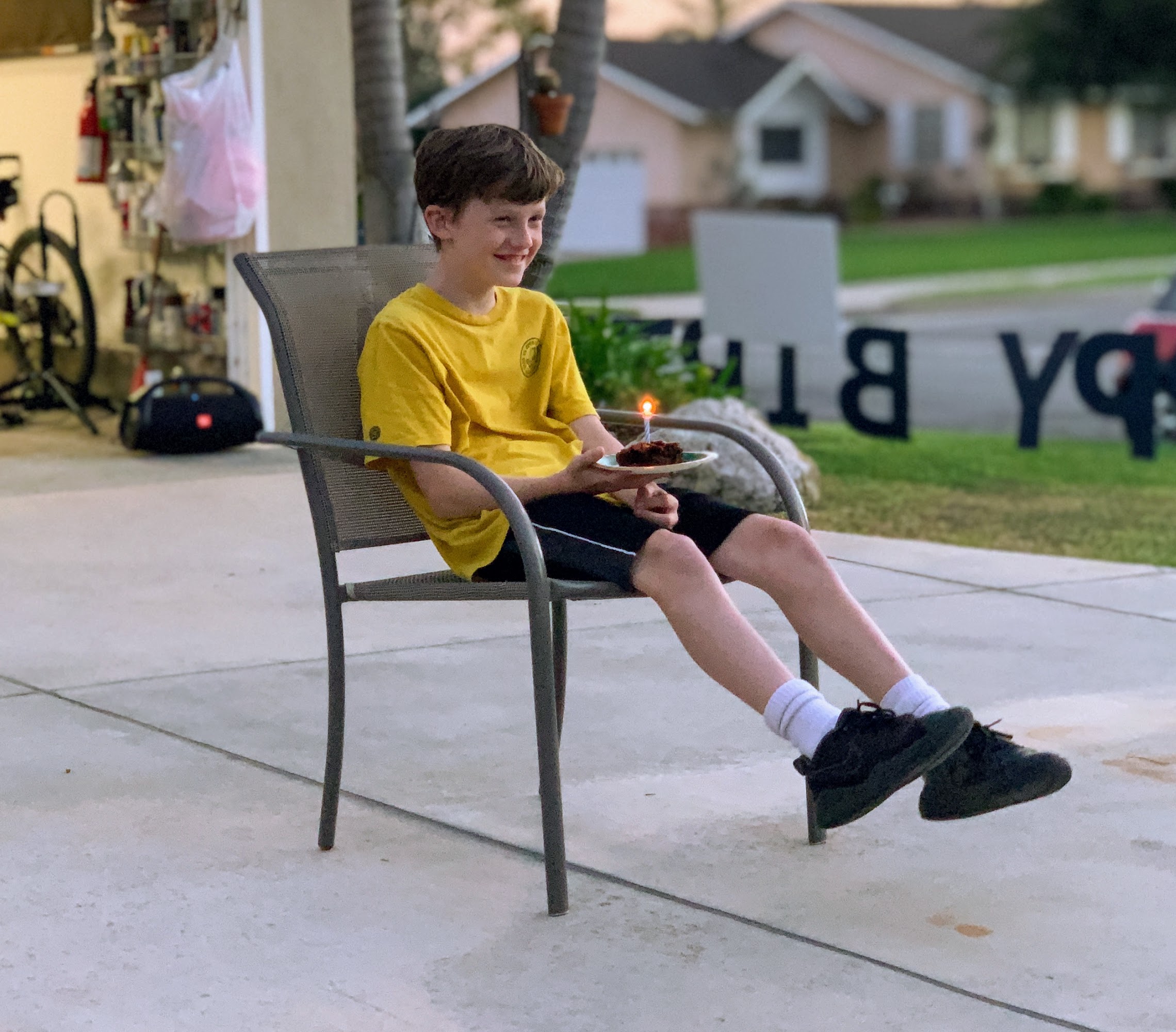 During the pandemic, blowing out candles has changed!

Dusk has arrived, and the movie is getting underway.  Spaceballs is a 1987 American satirical comic science fiction film co-written, produced, and directed by Mel Brooks.  The film’s setting and characters parody the original Star Wars trilogy, as well as other sci-fi franchises and popular movies, including Star Trek, Alien, The Wizard of Oz, 2001, and the Planet of the Apes. It was released by Metro-Goldwyn-Mayer on June 24, 1987, and was met with a mixed reception. It has since become a cult classic and one of Brooks’s most famous films. 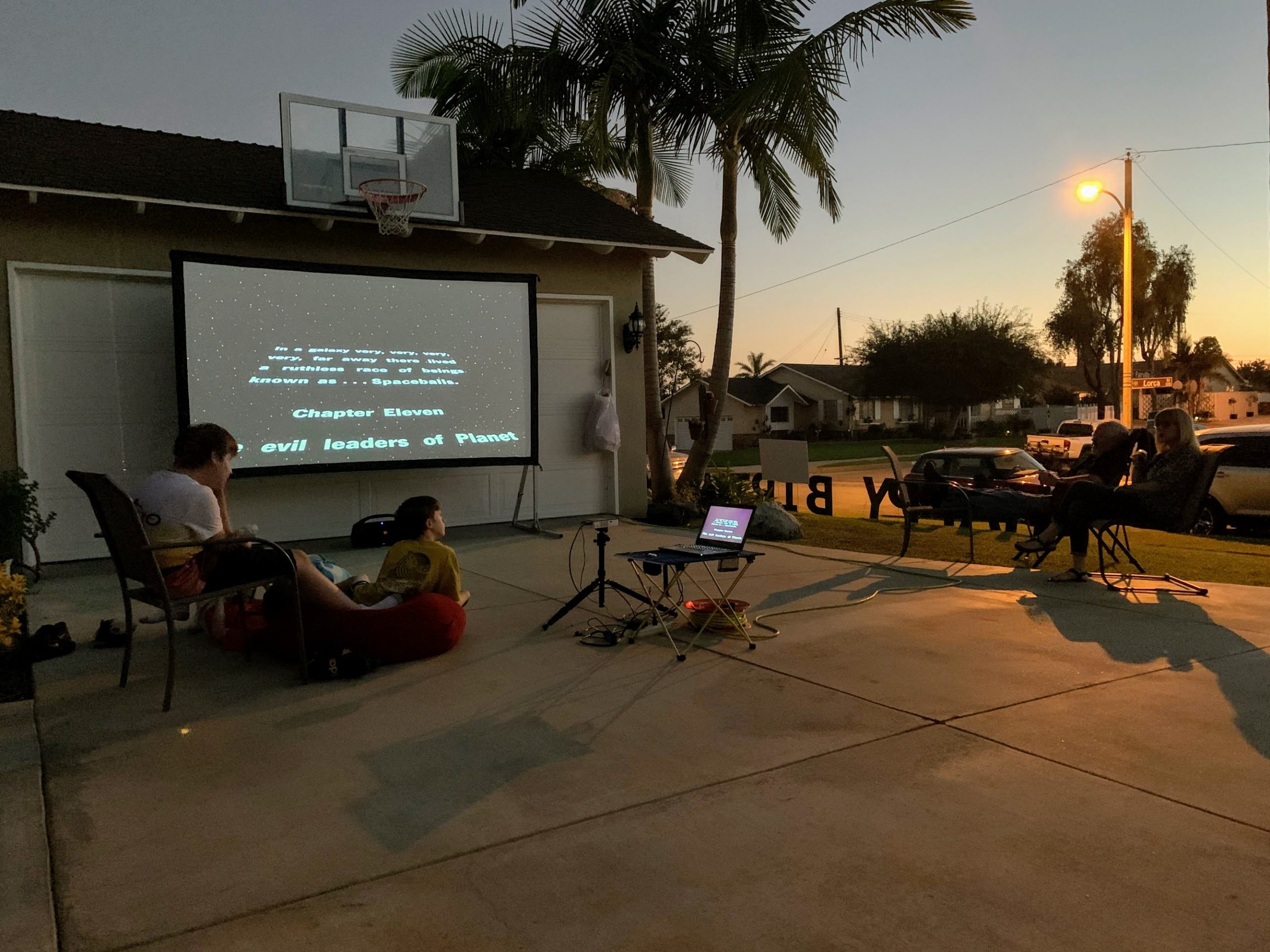 Bring on the movie!

While pretty corny, the play on words and cheap shots were hilarious with the “old folks” laughing up a storm.  A star pilot and his sidekick must come to the rescue of a Princess and save the galaxy from a ruthless race of beings known as Spaceballs.

Returning home about 10:30 PM, KFI-640 was running, and “Dark Secret Place” was playing.  Brian Suits’ Dark Secret Place is returning to KFI AM-640 (Los Angeles) on Saturday, April 4, 2015, and will be heard from 10 pm to midnight (local time) per spots currently running on KFI and as noted in their weekend program line-up.

Just an old retired guy trying to finish out my last years on this planet loving my best friend and wife, having fun, learning, and passing on helpful things to others.
View all posts by Paul →
This entry was posted in Cooking, Family, Movies, Working Around House. Bookmark the permalink.
Powered by Maribol IMDB Plugin