“Grief never ends…but it changes. It’s a passage. Not a place to stay. Grief is not a sign of weakness. Nor a lack of faith…It is the price of love.” – Unknown

Sue could do anything, but golf was her favorite pastime.  That woman could hit the ball so straight that it got boring to watch.  The ball would not travel too far, but it was like watching a machine.   Her putting was outstanding; line up the putt and bing, in the hole it went!  She often said putting was half the game, and she was right.

We golfed everywhere we went, including Alaska, all over Hawaii, New Zealand, Australia, France,  Toyoko (in the snow), Spain (in the heat), South America, Las Vegas, Arizona, Florida, everywhere.  We had so much fun just being together!  With her “evil eye,” she could spot my ball wherever it landed, and it landed in some remarkable spots (hardly ever in the fairway)

Now that it has been five months, I thought it would be easier to make it through the day, but alas, it is not.  I see her and hear her on every twist and turn.   I love you, Sue! 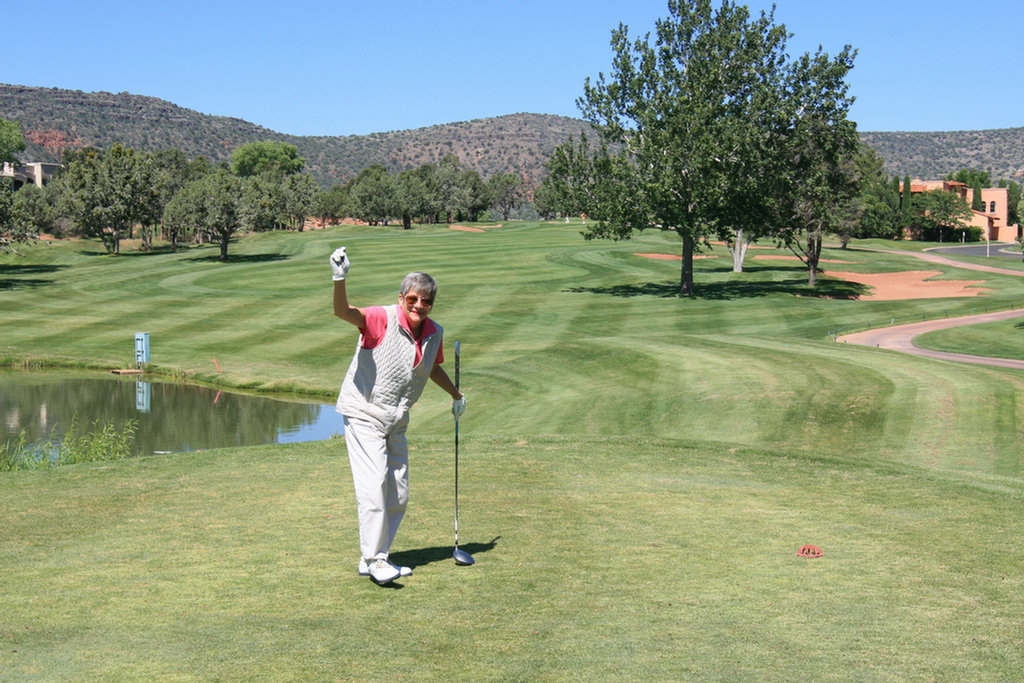 One hundred five degrees as we golfed in Sedona, Arizona!

I finally did it; I weighed in at 190.3 pounds this morning!  Now, how can I keep the weight down for the rest of the week?  A serious question that I must ask myself every time I pass that evil food storage device called a refrigerator!

It’s time for a walk, so I headed north through the hood, and almost immediately, I ran into a herd of Bow Wow’s. This gentleman is fearless because can you imagine what would happen if they all took off in the same direction, or worse yet, different directions? When I commented on his canine group, he stopped and posed the group for me. 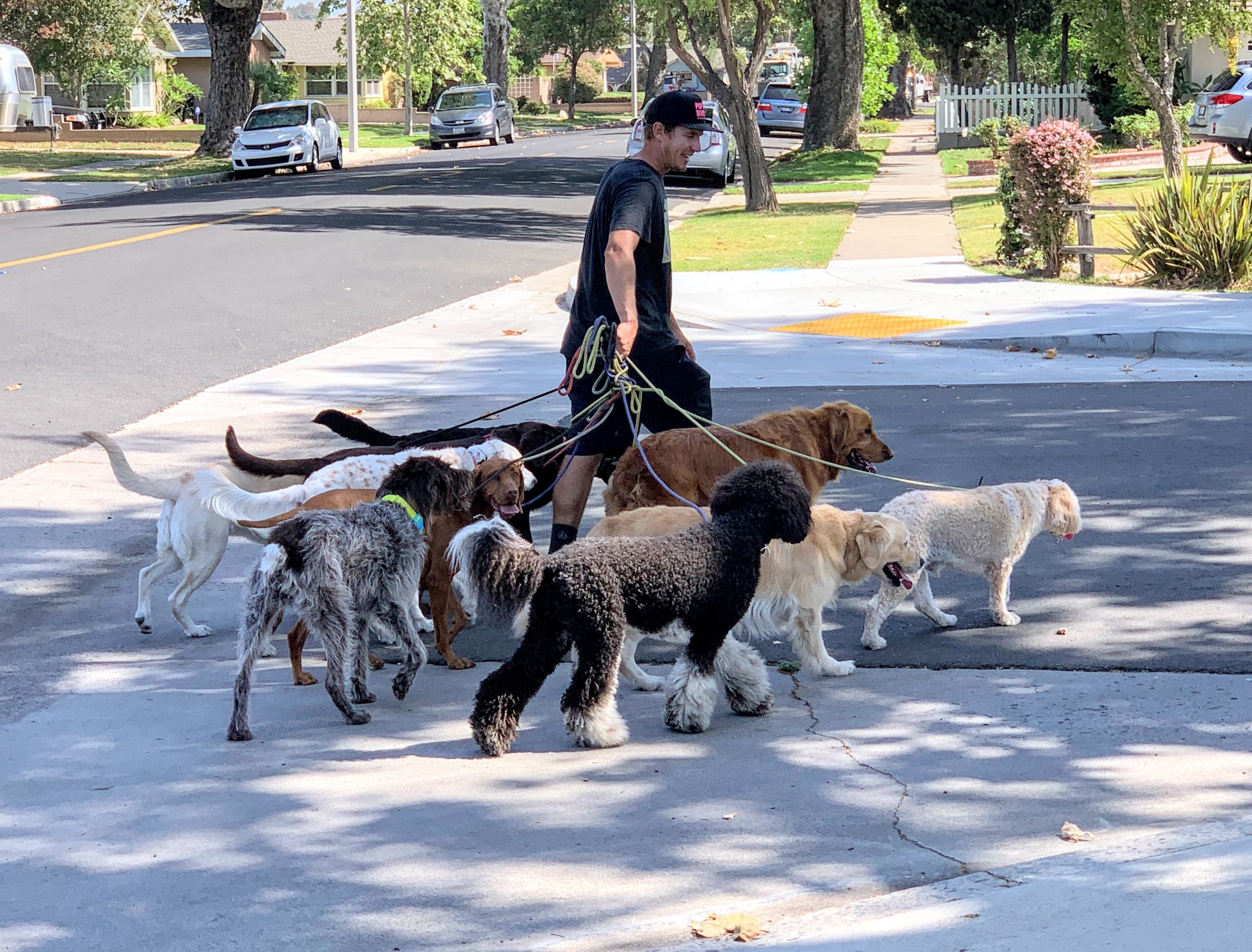 A short distance up the street, I saw this fantastic truck. In the old days, roadway markings were merely done by a pickup truck with a guy making the marks on the road manually.  Now, they have an entire vehicle devoted to making the marks on the street complete with the fellow in the back who guides the brush with a set of controls, much like the back of a hook and ladder truck. It was quite a machine. The guy bending over looks appears to be cleaning the paint head, which became jammed. 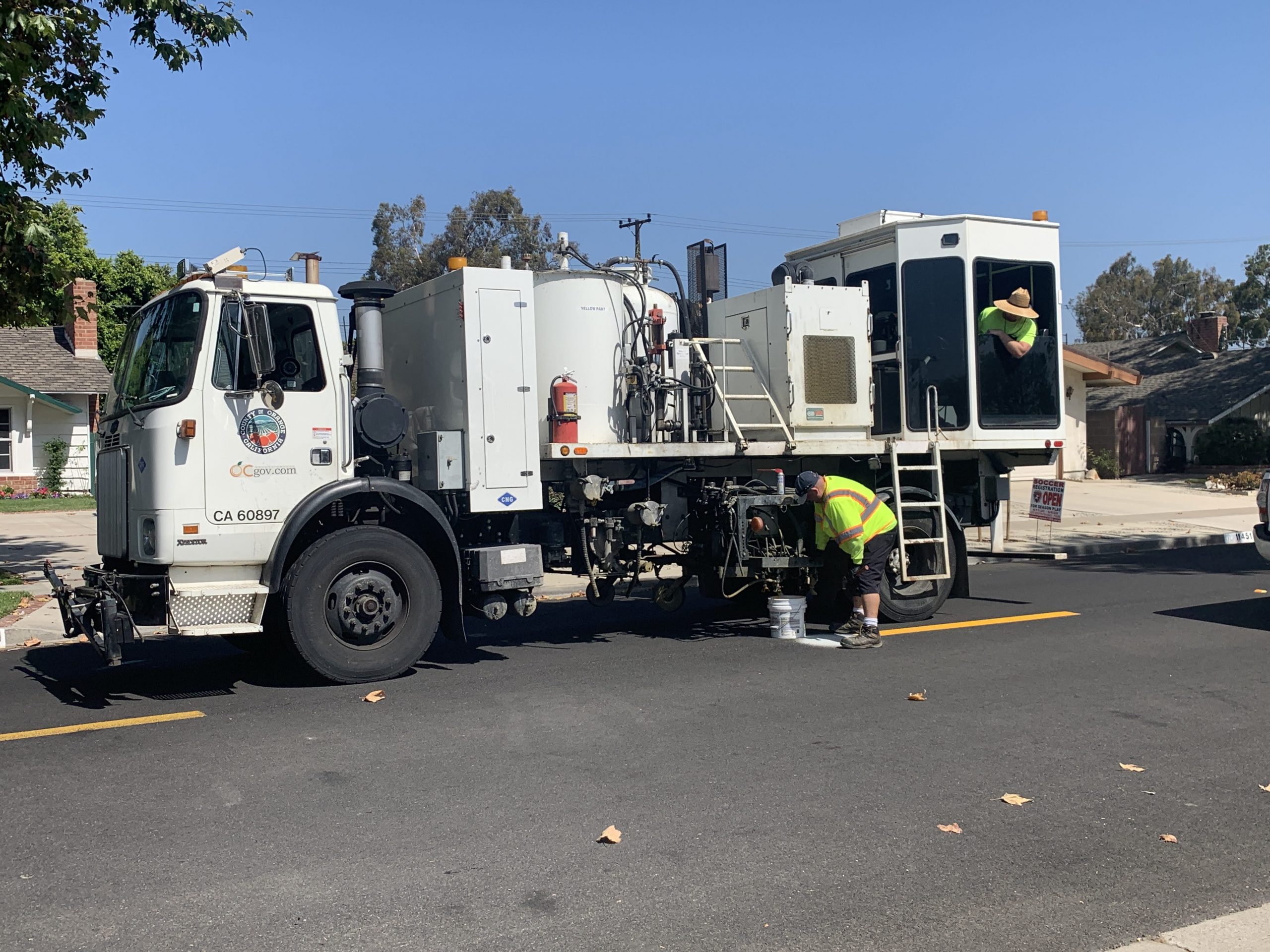 Marking the streets takes a lot of machinery.

No more excitement, merely mother nature showing her beauty during the rest of my walk.  The Crepe Myrtle trees were in full bloom and were spectacular. 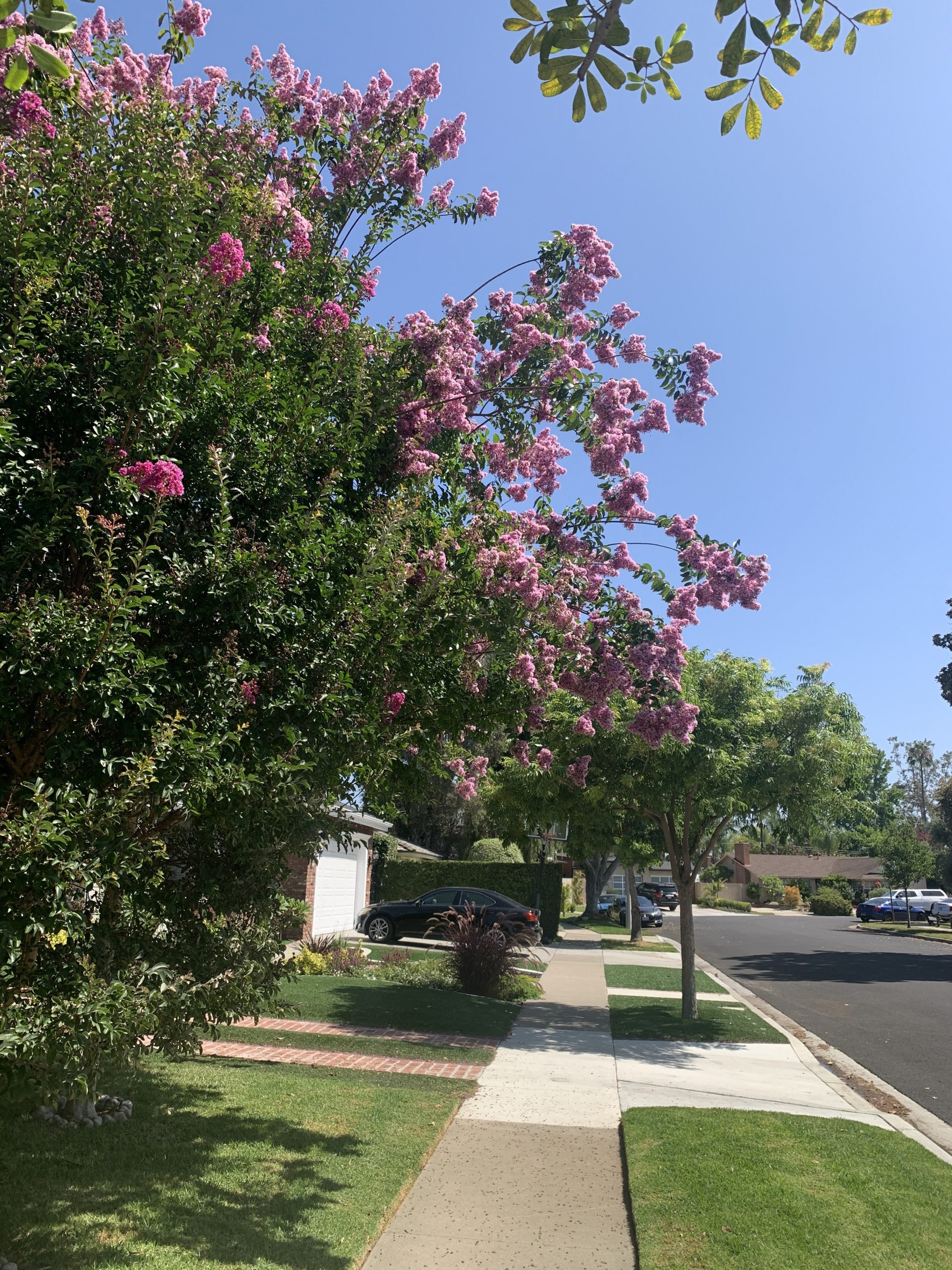 Love the trees in the hood.

Ah-ha, I spotted a potential meal sitting right there on the grass. Unfortunately, these guys were inedible toadstools, so not exactly pleasant to eat.  The terms “mushroom” and “toadstool” go back centuries and were never precisely defined, nor was there a consensus on application.

Every time I see this scene, I remember when Sue and I call a call from Jonathan’s school.  He had taken a dare and ate several mushrooms growing in the grass.  We took him to the emergency hospital, where they gave him a bunch of liquid charcoal to drink and pumped his tummy.  He was a mess for the rest of the day! That must have been twenty-five years ago.

Did You Know? Separating edible from poisonous species requires meticulous attention to detail; there is no single trait by which all toxic mushrooms can be identified, nor one by which all edible mushrooms can be identified. People who collect mushrooms for consumption are known as mycophagists, and the act of collecting them for such is known as mushroom hunting, or simply “mushrooming.” 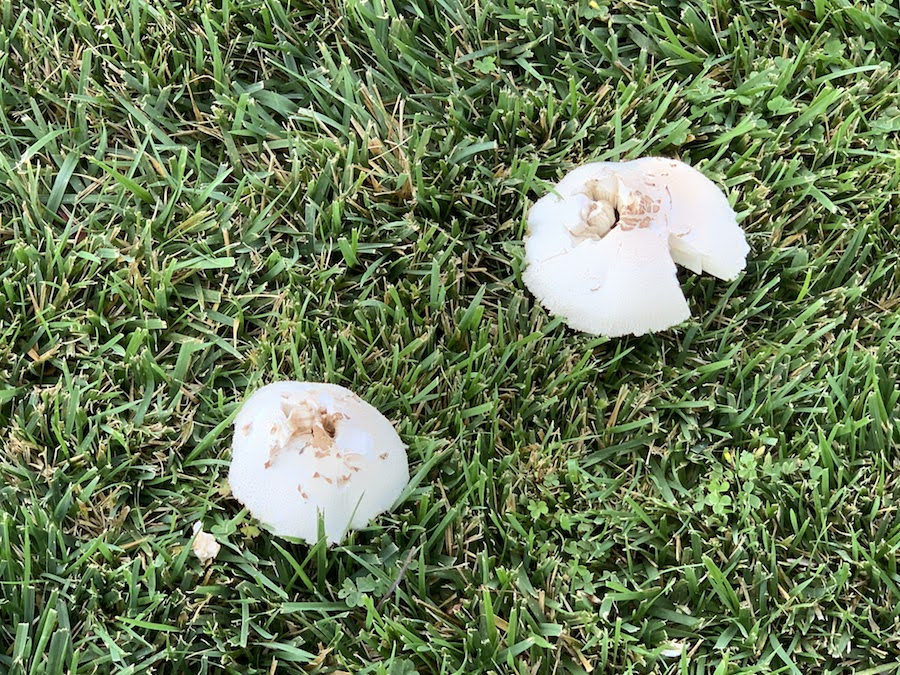 So, I passed up dinner and continued to the next beautiful flower I saw.  These little guys are quite interesting as they are a brilliant white in the leaves are almost paper-like in their consistency. These flowers stay blooming for nearly a month before finally giving out. I believe they are called “dog roses.” 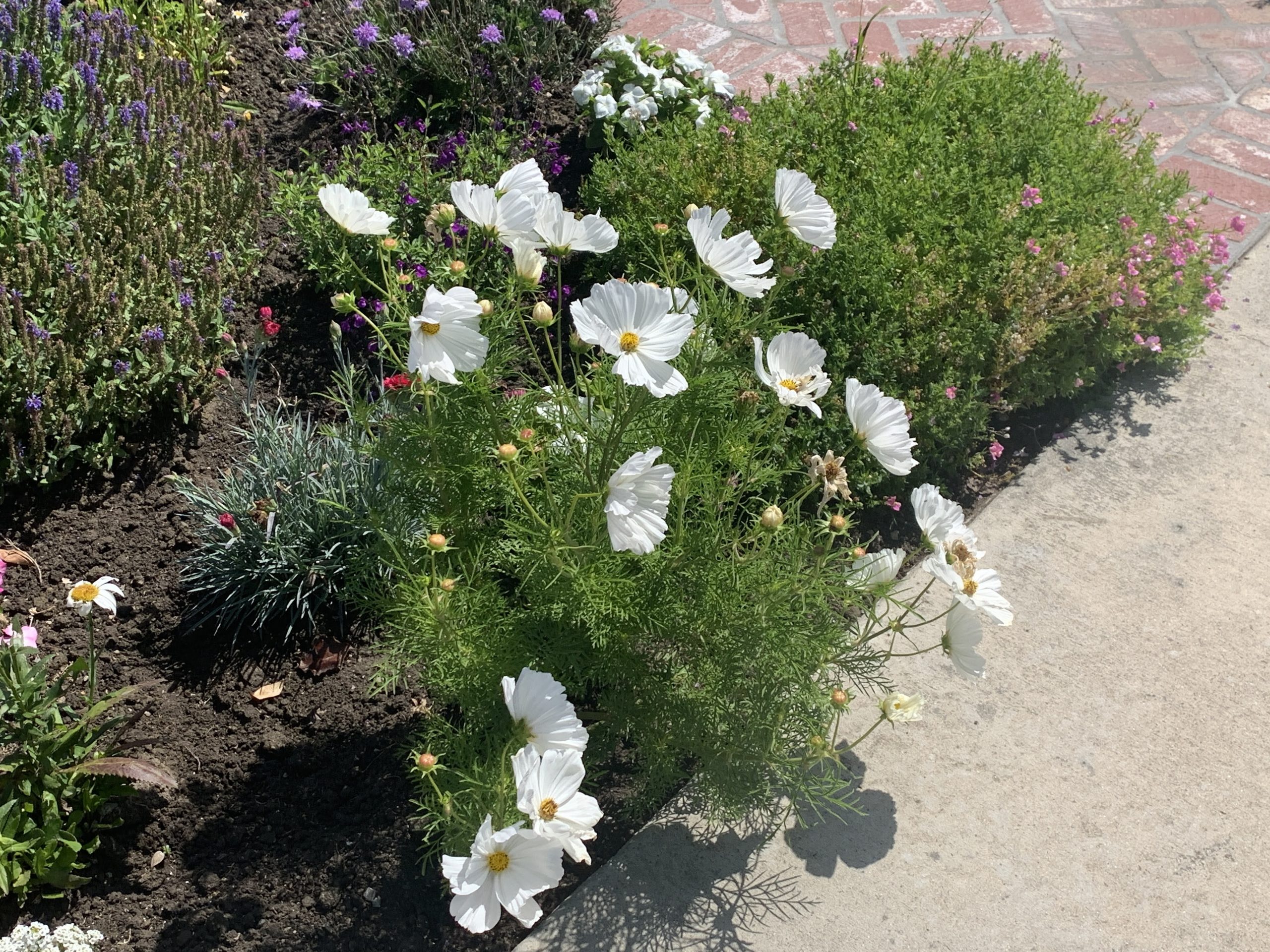 He is standing tall!

In the final stretch of my walk, I passed my neighbor’s house and observed their collection of flags. They have two little kids, so I think they did some decoration in celebration of July 4th.  This family that made the two drawings of Sue and me and gave them to me when Sue passed. 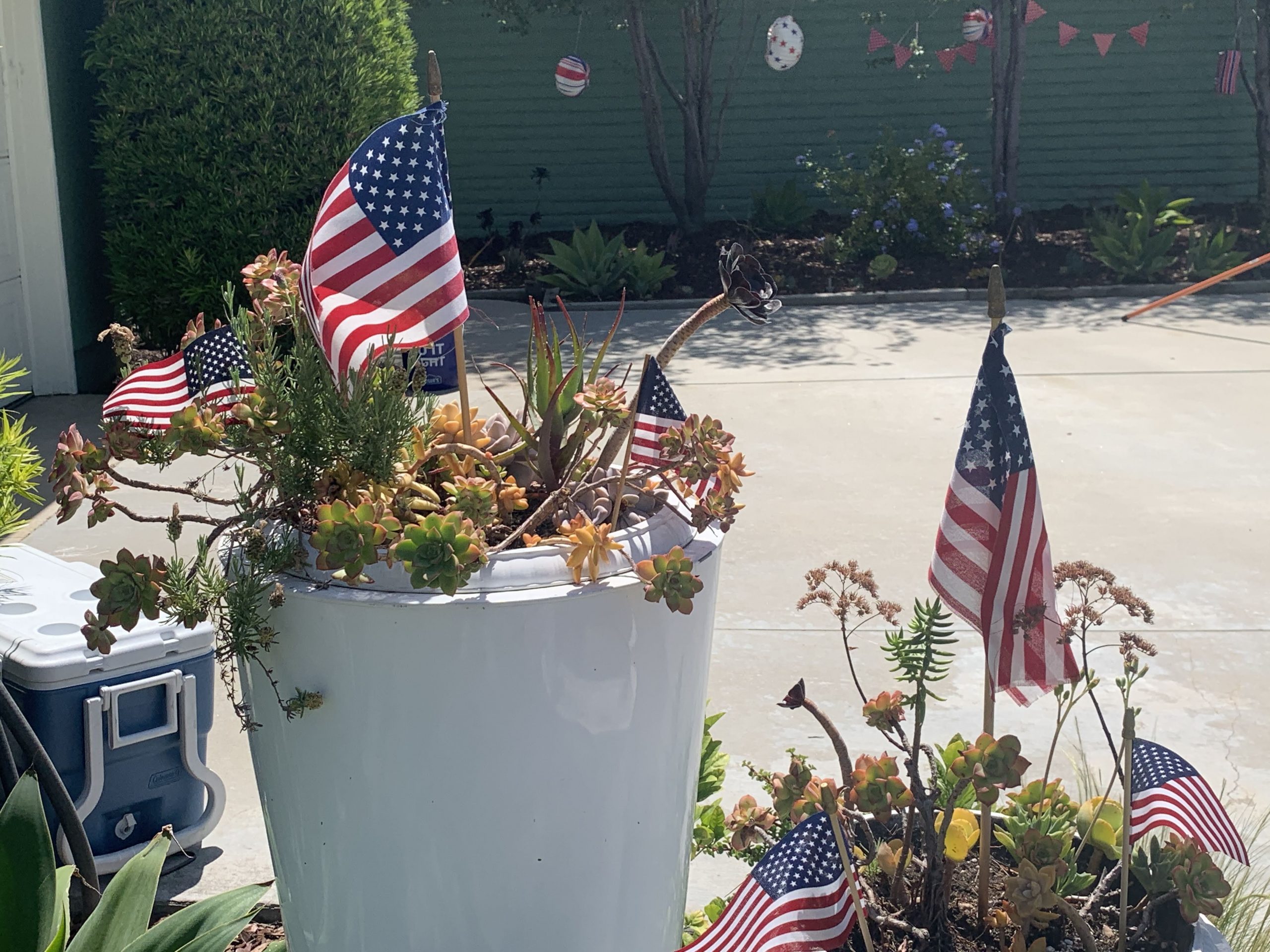 Our neighbors love this country.

I walked almost three miles this morning, and it felt terrific.  I didn’t walk every day for nearly two weeks because of all the construction going on around the house. 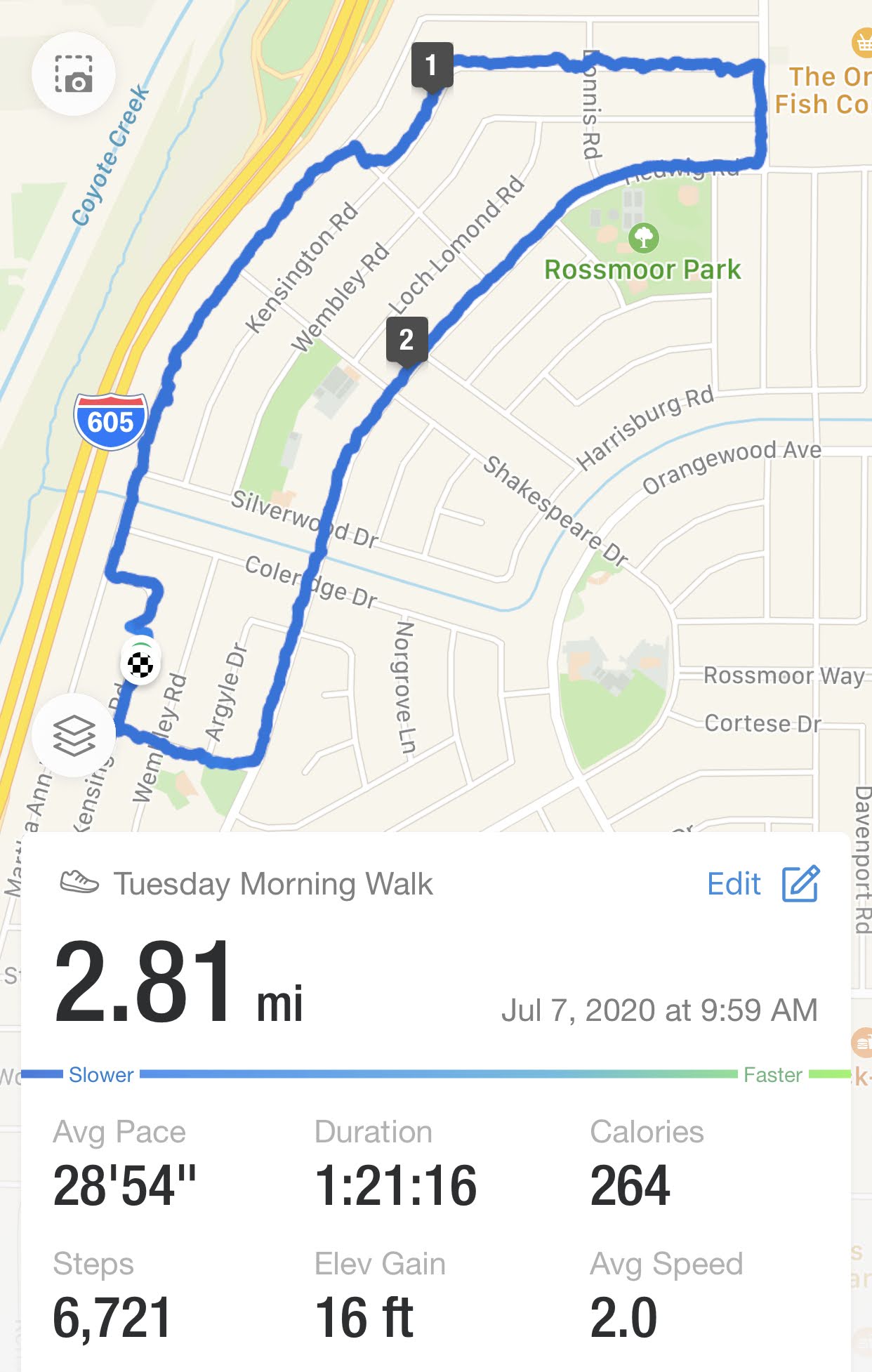 Pleasant walk this morning, and I talked to Jan and Joe the entire time.

I got back home; it was time for lunch. I decided, after my walk, then I would reward myself with a nice big juicy steak. Below is a picture of one of the plates that Sue I picked out together when we first got married. I found them in the closet, carefully put away, and I decided that they needed to come out and be used. Of course, they remind me of Sue every time I see them, and that is a good thing. 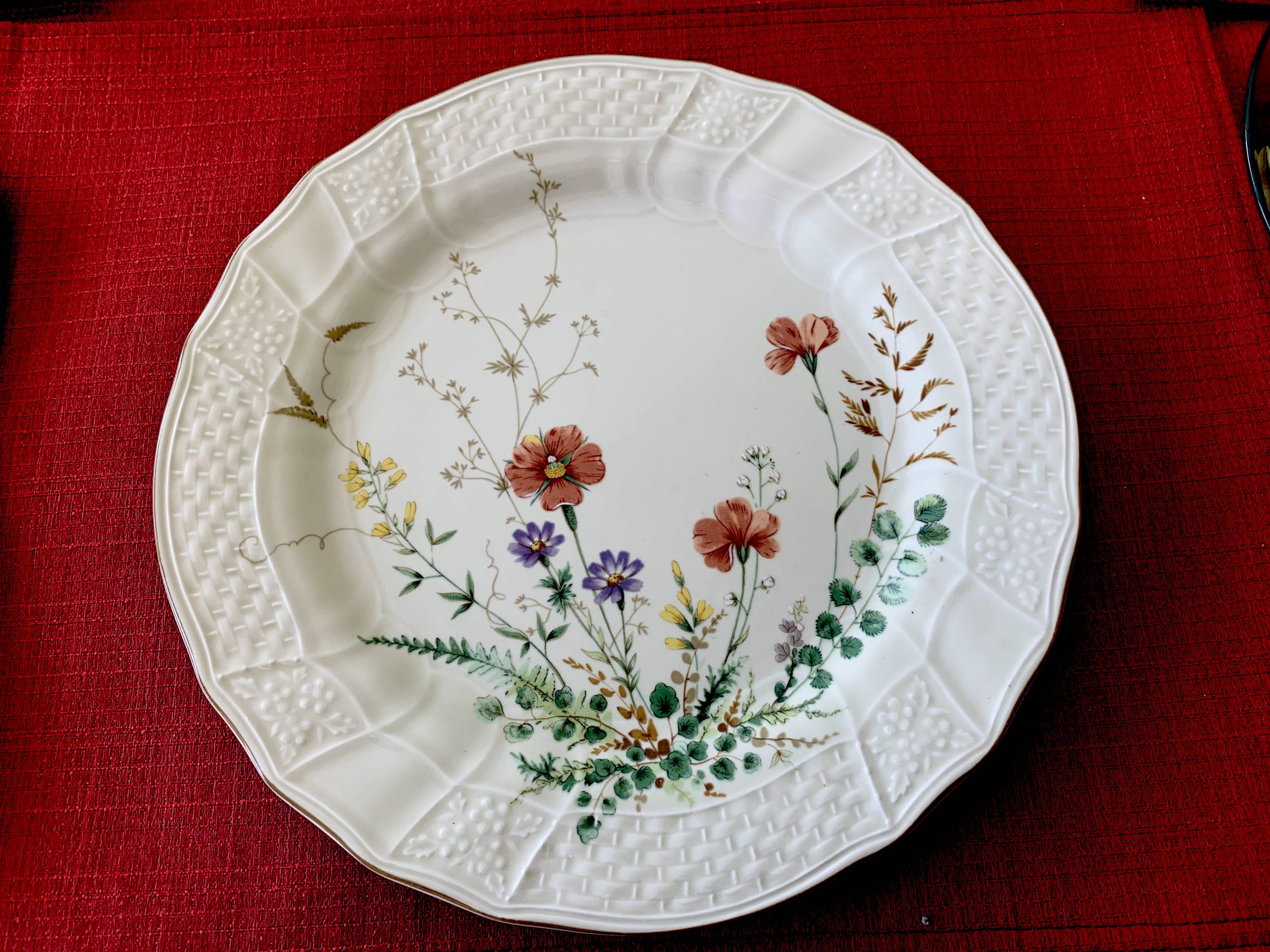 Sue had great taste, and I love dining off our original dinnerware.  The pattern is Margaux by Mikasa.

Making lunch was very easy as I just popped the steak into my big cast-iron pan for approximately five minutes on each side. Before I flipped the steak over the first time, I wandered out into the garden and found myself a big juicy tomato, which I cut into hefty slices and plopped into the frying pan.

While the second side of the steak was cooking, I prepared a spinach salad and poured a glass of wine. You may have noticed that my tablecloth has changed! I decided red was a good color for July.  I should mention that I used Scotchgard at my end of the table for obvious reasons. 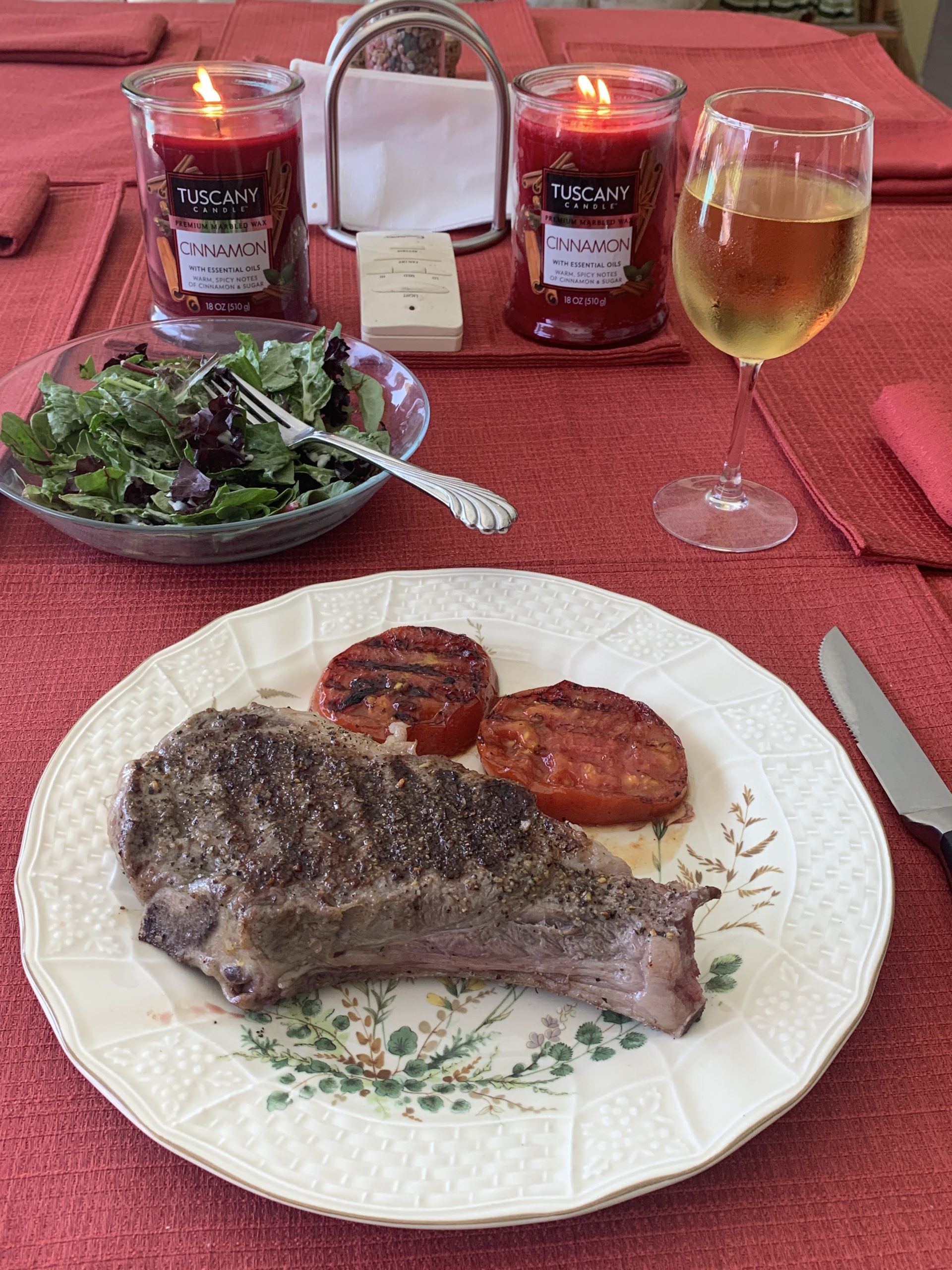 If I don’t say so myself, the tomatoes were a great addition to the meal.  They were quite juicy, and we’re quickly cooked adjacent to the steak. 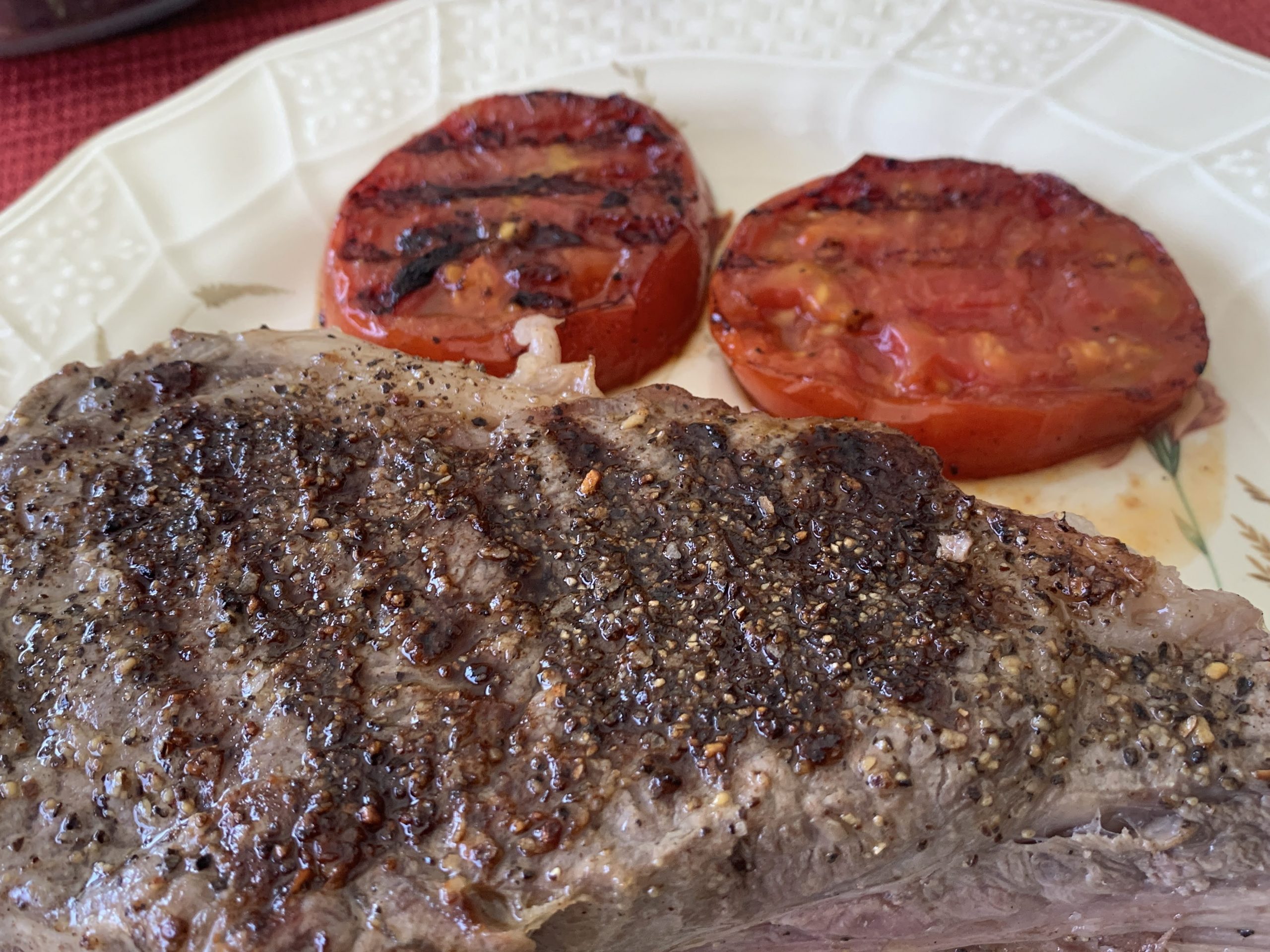 The tomatoes were just born, as Sue used to say.

Lunch was quite satisfying, so I sat back and pondered what I would do the rest of the day before my social engagement at 5 PM over at the park. 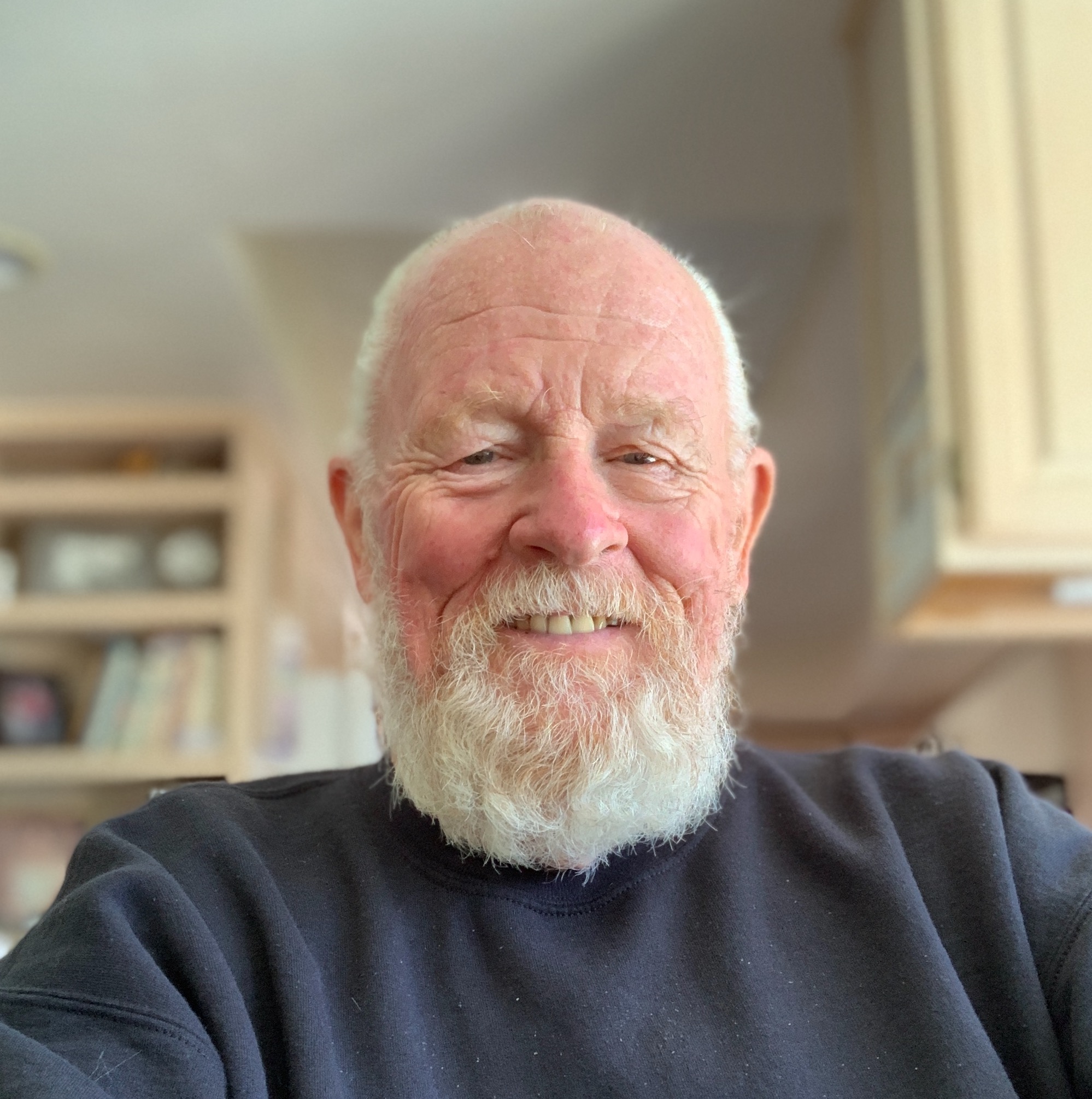 Bob began his work in the bathroom, putting in finishing touches, and I headed to the market as I was out of “beer.”   The O’Douls is an excellent beer substitute, and I can drink two bottles and not get sleepy!

While on the way to the market, I talked to the solar power contractor and worked out some more details.  He said it would take about six weeks, most of it being paperwork with the city.  It’s not a bad deal.  $20,000 for the job and the kind government gives me $6,000 back.  The payoff, especially since I will pay cash, is about 4.5 years, plus it will add about $25,000 to the value of the house.  I told him I would get it underway mid-August or the latest September 1st.  It’s kind of exciting to think the sun will power my home!  No longer will I worry about turning off every light!

I stopped at Bed, Bath & Beyond to get two squeegees since I will be cleaning the shower doors more often.  It seems like going solar is a good investment.   While there, I got a call from Marianne, and we chatted for a while.  We decided to get together soon.  She wants to see the new bathroom as she is looking to do some remodeling also. 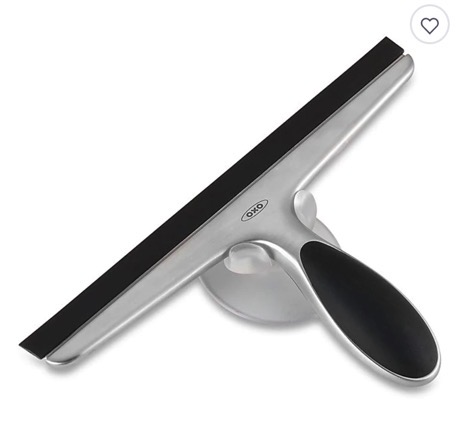 Complete with a suction cup holder!

At Ralph’s market, they had a magnificent display of hand sanitizer. Everything must be getting back to normal as a hand sanitizer was available as well as toilet paper.  I am still using the stuff I already had.  Robin was the person who got me into hand sanitizers years ago. 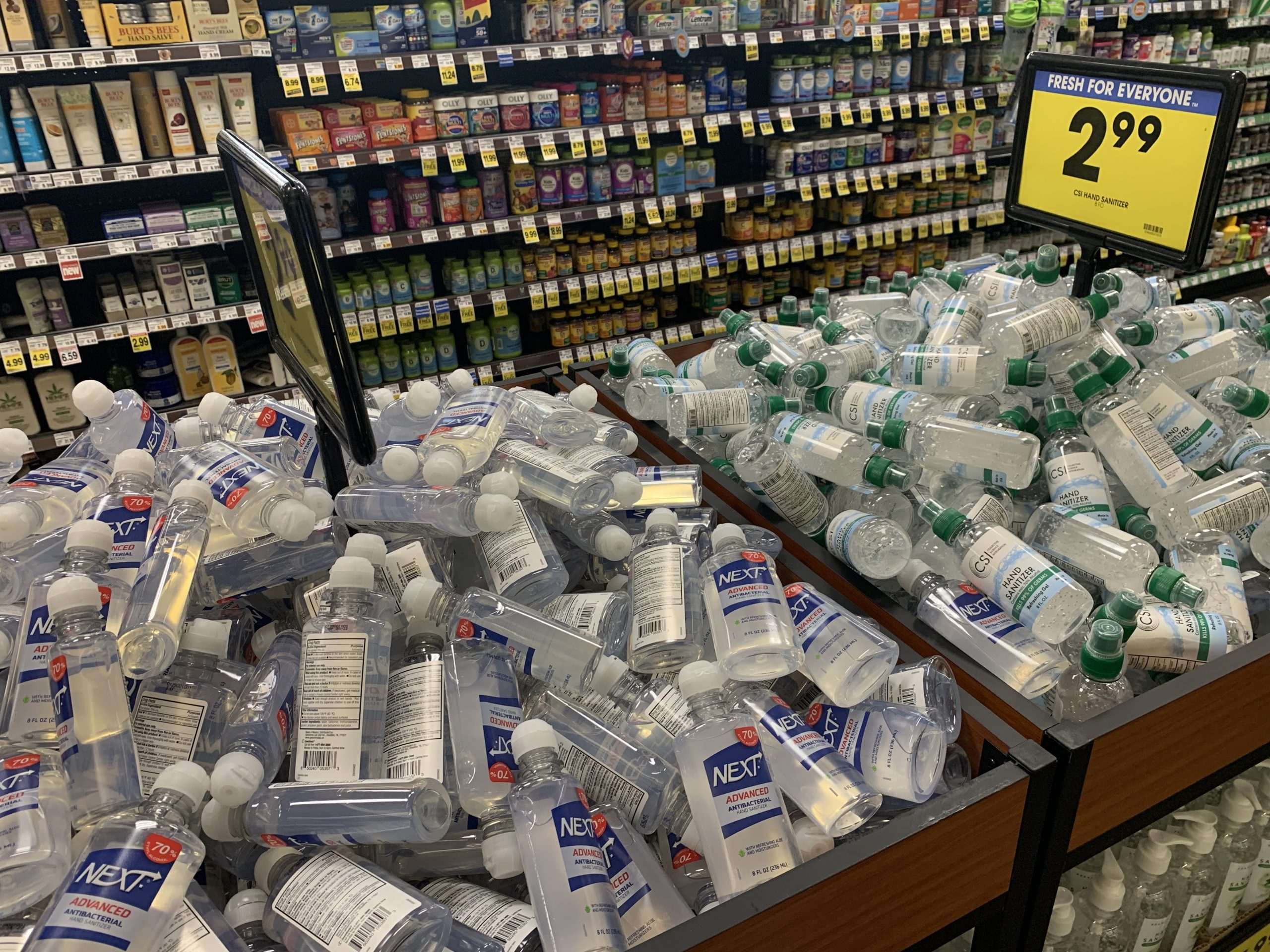 Hand sanitizer coming out their ears!

At approximately 4:45 PM, I did a minor amount of cleanup to myself, grabbed a bottle of wine, and headed to Rush Park just a couple of blocks away. I had been invited to join Shaun and Teri to celebrate their anniversary. When I arrived, I found Kim and Dave were already there. The five of us had a great time, and I didn’t make it back home until approximately 7:30 PM.

Thank you Shaun and Teri for inviting me to celebrate with you!  You are good friends and kind to ask this old cover to join you! 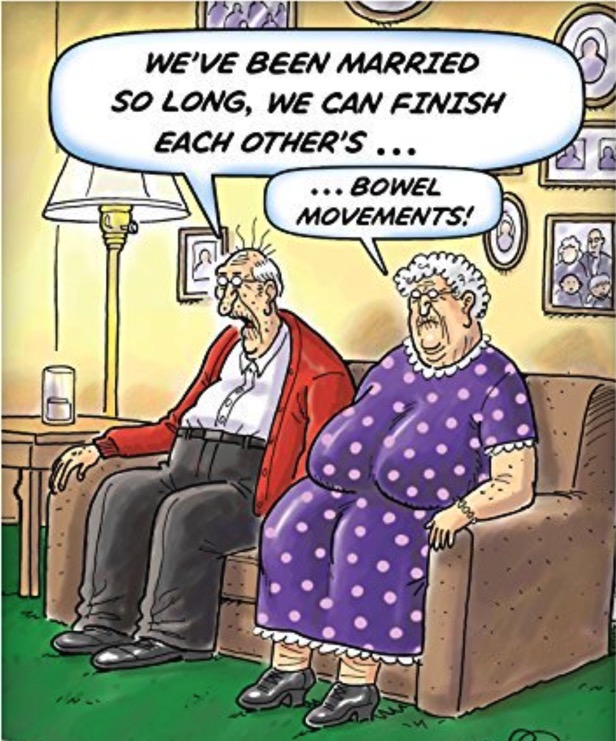 Hey, I could not help myself!!!

Kim brought a small boombox so we could listen to music. She asked me what music I would like to hear, and of course, I requested “Come Go With Me” by the Dell Vikings. I had forgotten that Kim told me she enjoyed dancing and when the music started she remarked how beautiful the music of the 1950s was.

Well, what did I do but ask her if she would like to dance! We danced to about four or five songs together over the next two hours and it was great.  Kim is an excellent dance partner!  We may have worn a hole int he grass with our fancy dance footwork! I told Dave, her fiancé, that he needed to take dance lessons, and I knew he needed to talk to Jan. 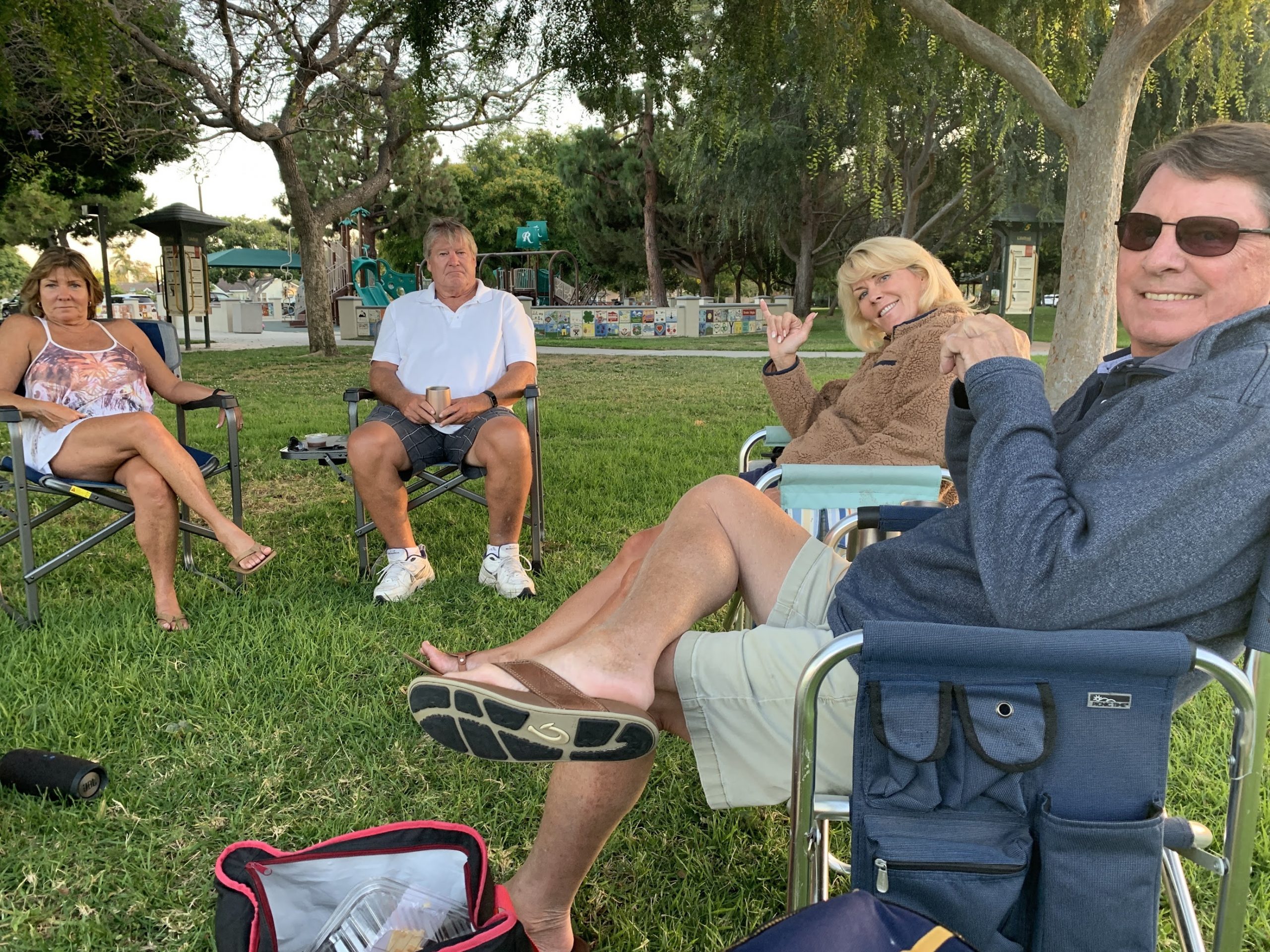 Teri, Shaun, Kim, and Dave…Long time friends from Old Ranch!  Kim lives around the corner from me, and after they get married, Dave will also be my neighbor@  Small world!

As the five of us were talking, I noticed a beautiful dog coming in our direction. The girls asked his owner if the dog could be petted.  The dog was cute, and I believe his name was “Champ.” 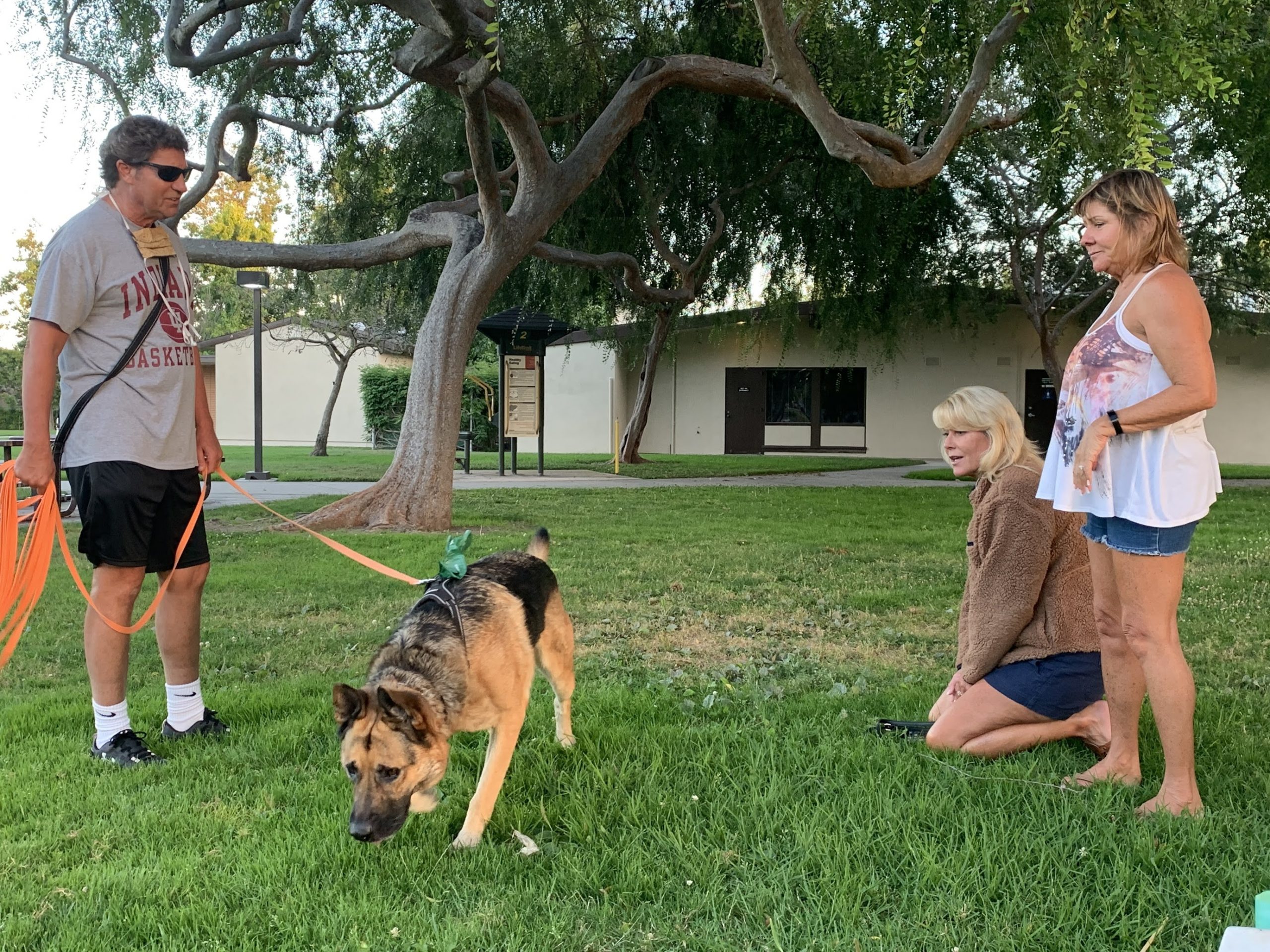 Both of the ladies love dogs, and it was apparent.

Champ came over to me and was interested in my wine bottle.  I offered to share, but he decided water was more interesting.  He was a rescue but turned out to be a real lover! 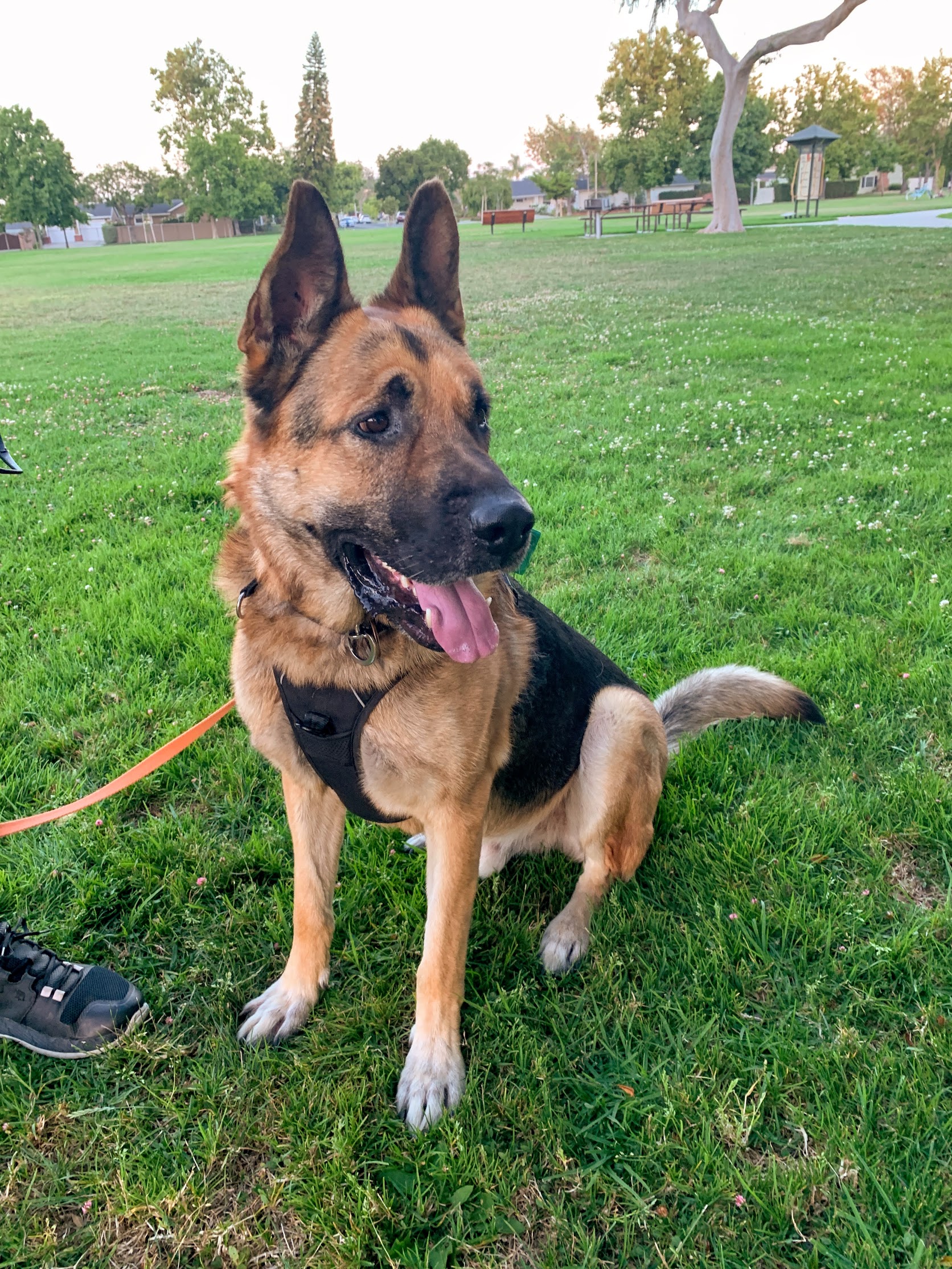 He was a beautiful creature.

Well, by the time I got home, Bob was gone, the wine was gone, and I was gone!  I laid down, and that was the end of the day!  I woke up at 2:00 AM and finished off the daily diary and went back to bed.

Tomorrow the finishing touches go on the bathroom, and by Friday, I should be painting!

Just an old retired guy trying to finish out my last years on this planet loving my best friend and wife, having fun, learning, and passing on helpful things to others.
View all posts by Paul →
This entry was posted in Cooking, Dancing, Friends, Fun, Walking, Working Around House. Bookmark the permalink.
Powered by Maribol IMDB Plugin