He (Brian) Read My Mind!

“Tomorrow is the most important thing in life.
Comes into us at midnight very clean.
It’s perfect when it arrives, and it puts itself in our hands.
It hopes we’ve learned something from yesterday.”
John Wayne’s headstone

I was sitting here this morning in the garage looking st pictures from the 4th of July in years past, and as I saw this picture, the phone rang.  Brian and Jan called to check in on me, wow!  It was almost spooky!   Sue took to these two folks, and we planned to visit them this year, but alas, God had other plans.

We had so much fun with Brian and Jan when they came home to the US from the UK.  We went walking in the gardens, visited Catalina, went on water taxis, found new and exciting English Pubs to visit, just hung out.

Sue was just a barrel of fun to be with, and her quick wit and occasional “zingers” are so sadly missed.  I love you, Sweet Sue! 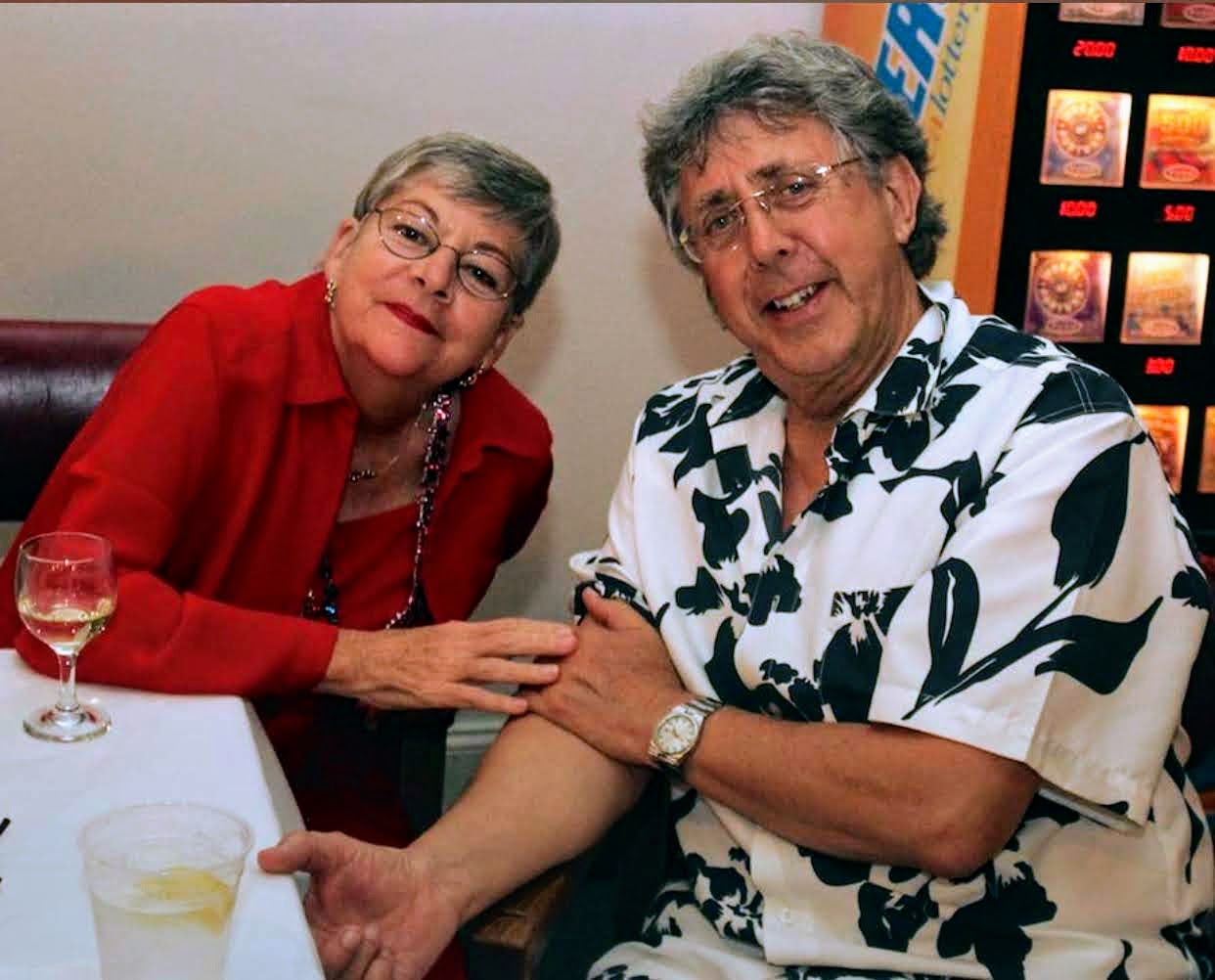 Sue and Brian are enjoying each other’s company.

Well, I cleaned up this morning and made sure everything was ready for the shower guy to show up and take measurements on the new shower.  While I was at it, I washed down the front entranceway putting all the materials and tools off to the side. Looks pretty good! The place almost looks good again. 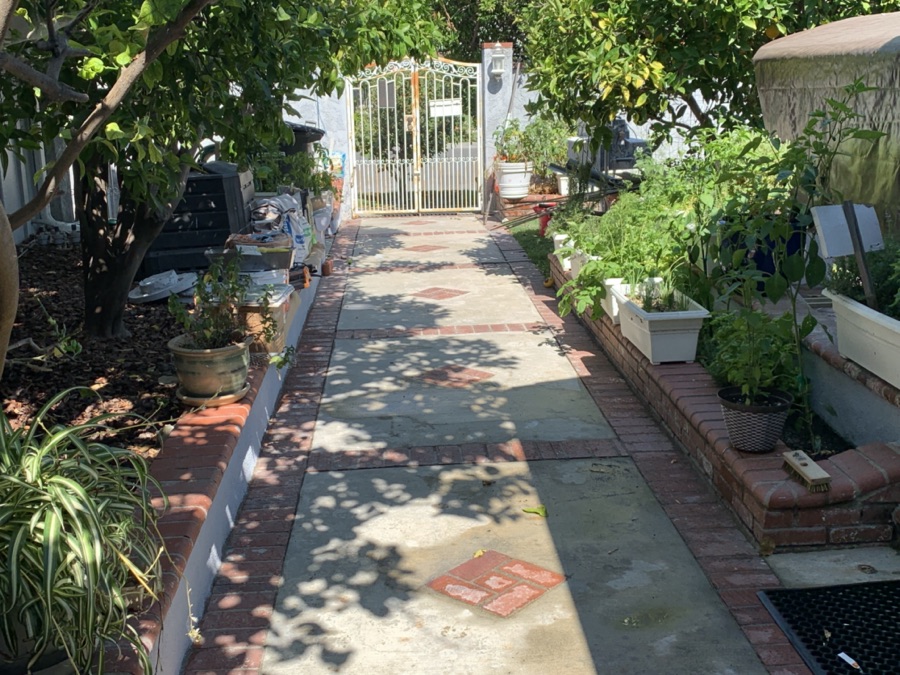 I never realized how many tools and how many different kinds of supplies were needed for a simple bathroom remodel!

After the cleanup, I was getting hungry.  Being hungry is easy to tell as I hear the zoo animals growling and making other obscene noises!  I need to clean out the refrigerator, so breakfast turned out to be Chicken Tikka, which I nuked and a glass of pomegranate juice!  Of course, the meal was chased by a big cup of coffee.  Spicy kick to get the day re-started. 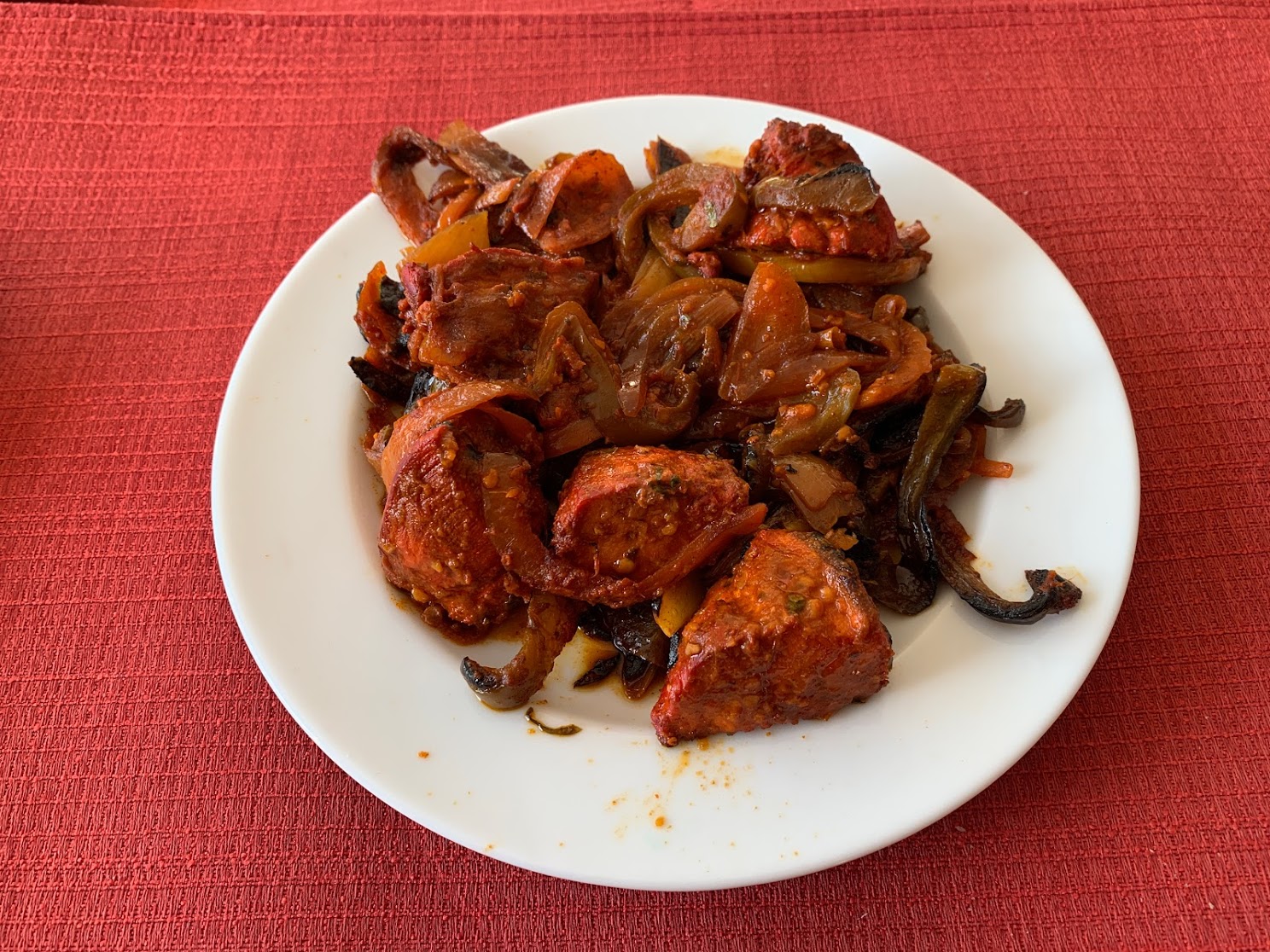 It is traditionally small pieces of boneless chicken baked using skewers on a brazier called angeethi after marinating in Indian spices and dahi (yogurt)—essentially a boneless version of tandoori chicken. The word tikka (Tike in Turkish, and Tik? in Azerbaijani) is a Hindi and Urdu word and means “bits” or “pieces.”

The glass guy measured the new shower, and it will be a door entry, no sliders.  The solid clear glass will be fixed to the wall.  The opening for the door will be wide enough for a walker or other mobilization device should it ever be needed.   Now that I am 190 pounds, yes, I made it to one-hundred-ninety today, I no longer have to go into the shower sideways!

While he was here, he replaced the old shower door in the Master Bathroom as it was twenty years old, and it just did not roll well.  The new doors are on sealed roller bearings, and the stainless steel wheels have a rubber outer edge, so it is quiet!  We loved the double shower, but it seems enormous these days. 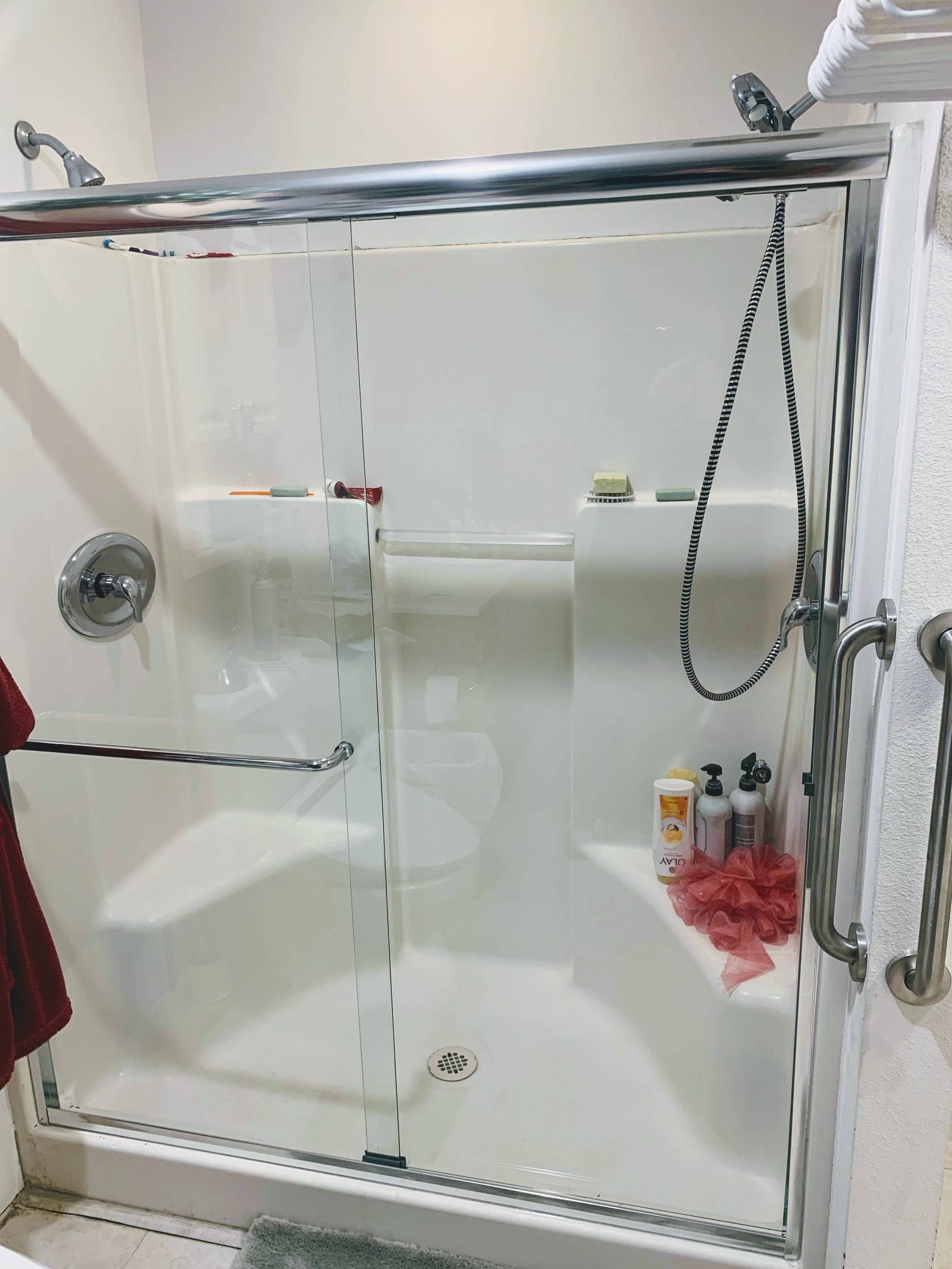 I have the side yard to go after this afternoon as I plan to move Christmas to the backyard like it used to be.  That will make it easier to go through in my attempts to reduce the number of decorations.  But, I have to stay “clean” as I was told by the shower guy, “The new door must stay dry for two days!” The next shower is Wednesday morning, and NO!, I am not selling tickets!  French bath, anyone?

There are always other options!!

Did You Know? French Bath: To douse one’s self with copious amounts of any God awful over-powering perfume or deodorant that burns the nostrils and olfactory senses of every person and animal within at least a mile radius to cover the fact that you are too damn lazy actually to shower.

Off to the sideyard, I go with renewed energy and high expectations for a leisurely couple of hours.  It was not to be.  I forgot how heavy those boxes were so I could only move three at a time, and then I had to lift them into place.  While Bob is here, I think I all put a wall on both sides and put a tin roof above with a weatherproof seal on the front.  I will make it so ONLY 36 boxes will fit, and therefore I will not be able to add any more! 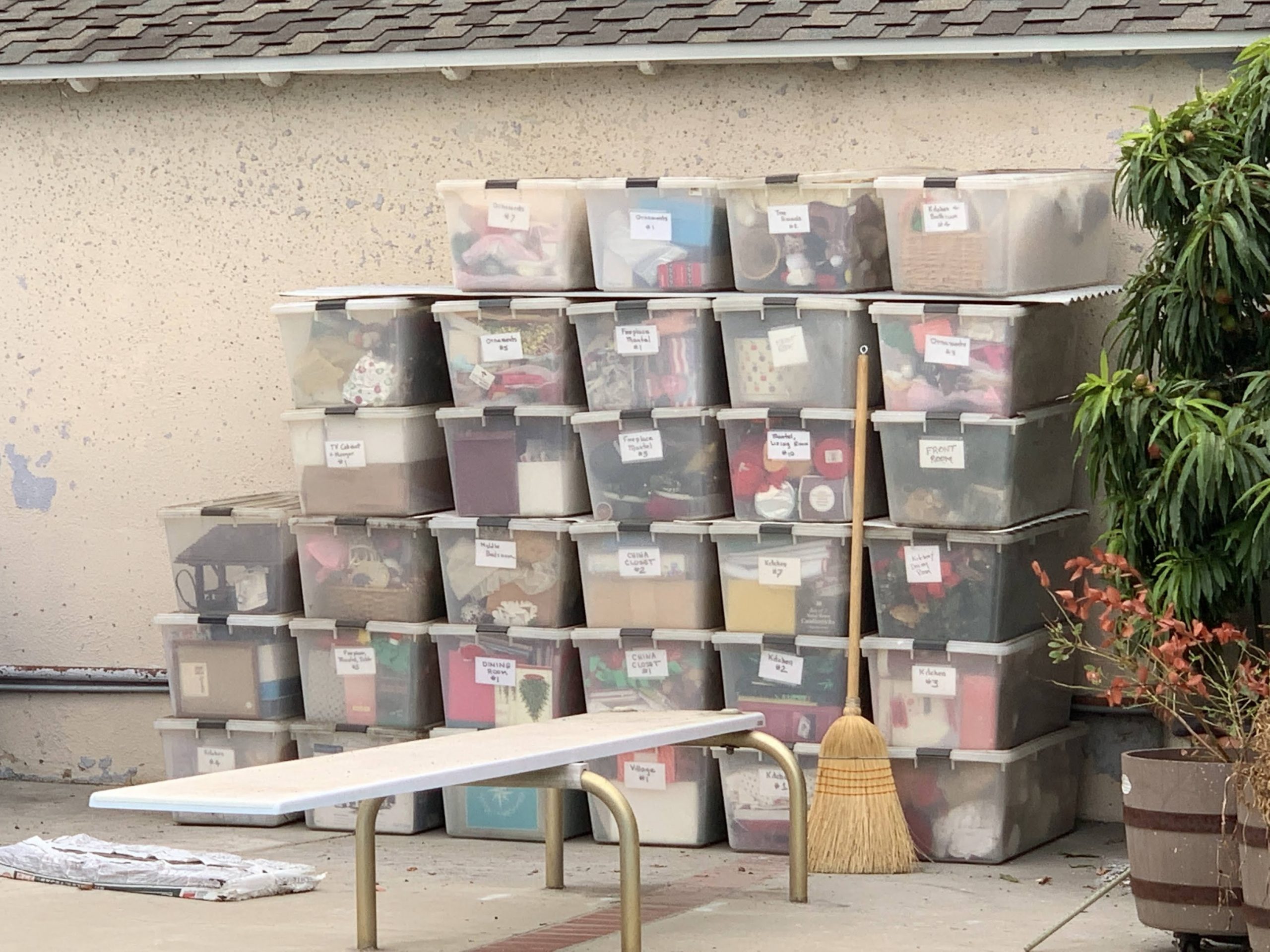 When I took the picture, there were still four additional boxes yet to be moved, so I now have 36 boxes of Christmas, down from fifty!

After working all day, I had been thinking about dinner, and I know I am going to cook up one of the two rib-eyes I got on special from Ralph’s yesterday.   I plan to go shopping in the garden and perhaps fix some crookneck squash or roast some potatoes and tomatoes to add to the dinner plate.  The steaks are the right size, so I may just eat half of one and save the other for tomorrow with bacon and eggs. Speaking about the market…

That would be me!!

Well, I am a boy!  I got grimy this afternoon, moving the Christmas boxes to the back yard.  Tonight I will take a washcloth bath and attempt to remove most of the dirt from this magnificent body, or maybe run through the sprinklers naked after it gets dark.  I have not decided yet!

I finally talked to Colleen as she was out with her in-laws visiting the USS Constitution.   That brought back some memories, and Sue and I had walked the Freedom Train in the winter several years back.  Sue was like a machine and just kept walking.  Me, on the other hand, was slipping and sliding all over the place and looking for the next location to sit down.  Today, walking ten miles is a no brainer.

She posted her picture on Facebook, and this morning I got a note from my cousin, Claudia, with a photo of her and Doug at the same location as Colleen’s picture was taken. 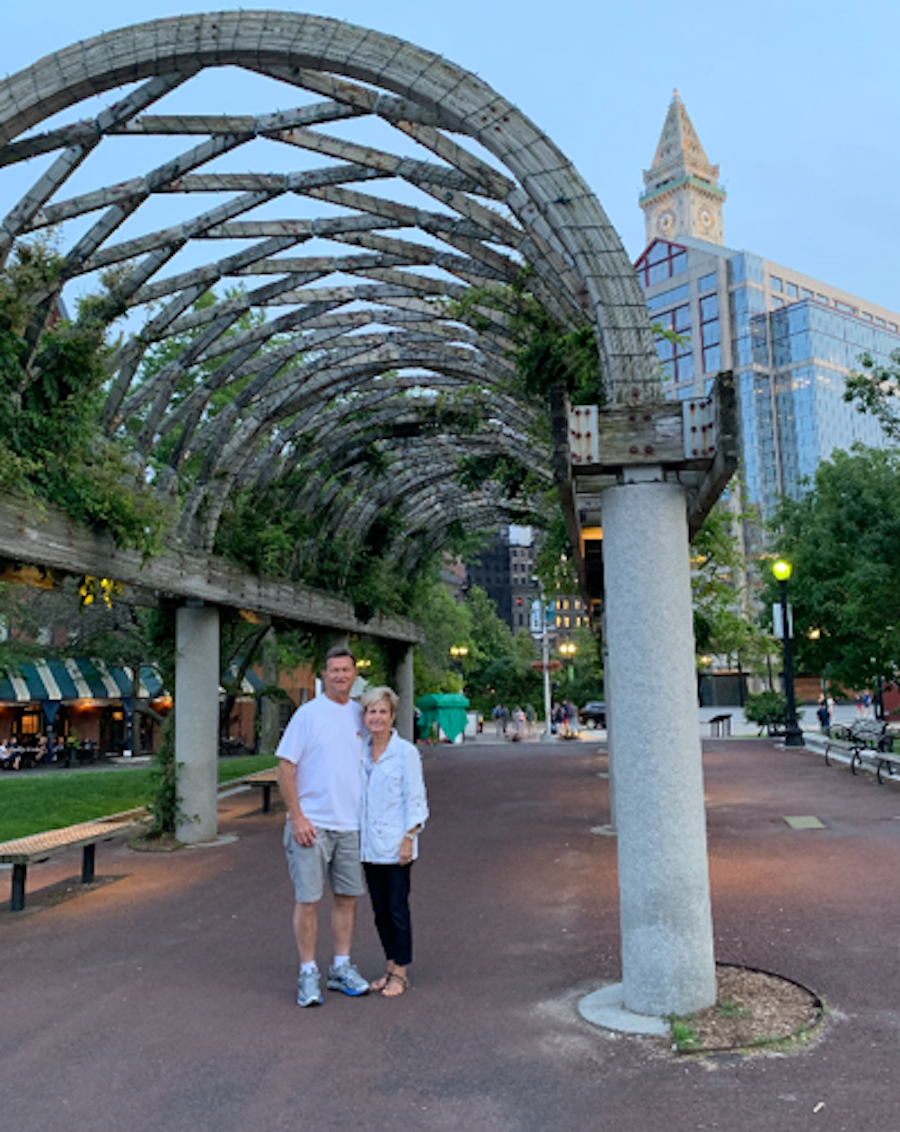 The last box I attempted to move was so heavy I could not lift it.  Then I remembered, it had the box with the Christmas dishes.   I had a brilliant idea; I wondered if Rebecca would like the set?  So I called her, and before I could complete my sentence, she said, “Oh please, yes!”

It seems she loved her grandparents set, but when grandpa passed, another member of the family got the dishes, and they were trashed within a few years.  Rebecca always wanted Christmas dishes.   So I moved them out of the box, making the box movable, and I will take the set over, or Zack might pick them up in the next few days.

She has NO idea how happy that made me, knowing Grandma’s Christmas dishes would get a proper home and be cherished by another generation. 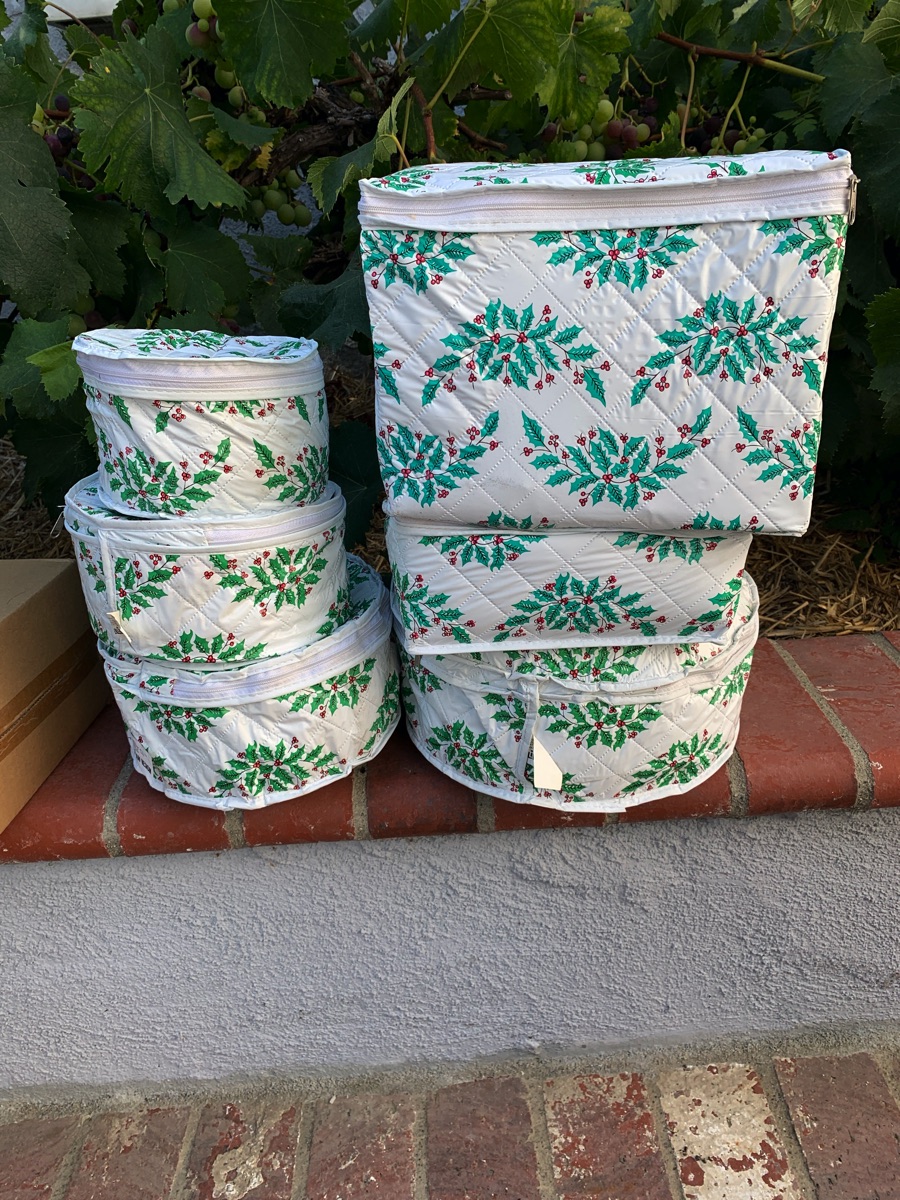 Bob departed about 8:00 PM, and I was pooped, so I nixed the idea of running through the sprinklers naked (besides, Vicky would probably report me to the feds).  Before he left, we did a drain test, and the drain is perfect!  The angles of the shower pan are quite sufficient to make the water seek the ocean! 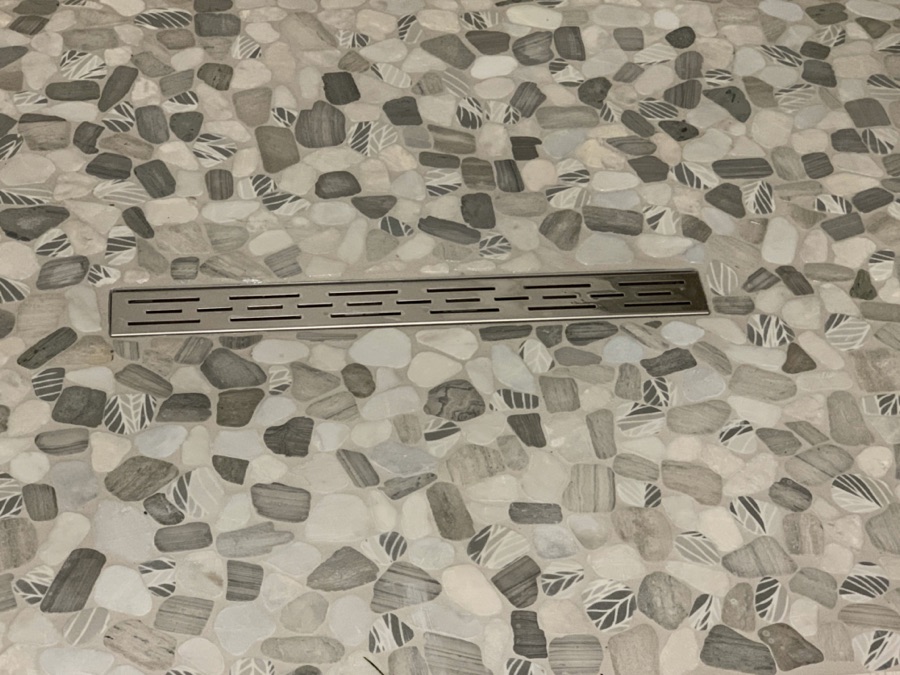 We checked out the new shower drain, and water flows out like a champ!

Into my cute warm jammies, I headed to the living room with a bowl of bing cherries and a big cup of coffee.  I wanted two more episodes of Hanna before the eyelids began to drop!

The last thing I remember is looking at our hearts that I have placed on Sue’s side of the bed.  We both had open heart surgeries within three years of one another.  each operation was identical with three bypasses accomplished.  They gave us these stuffed hearts fo a good reason.  When they open our chests, they have to break the breastbone, and it takes a month to heal.  Anytime you cough, even a little, it hurts like hell.  If you clutch the stuffed heart to your chest as you cough, the pain is much less. 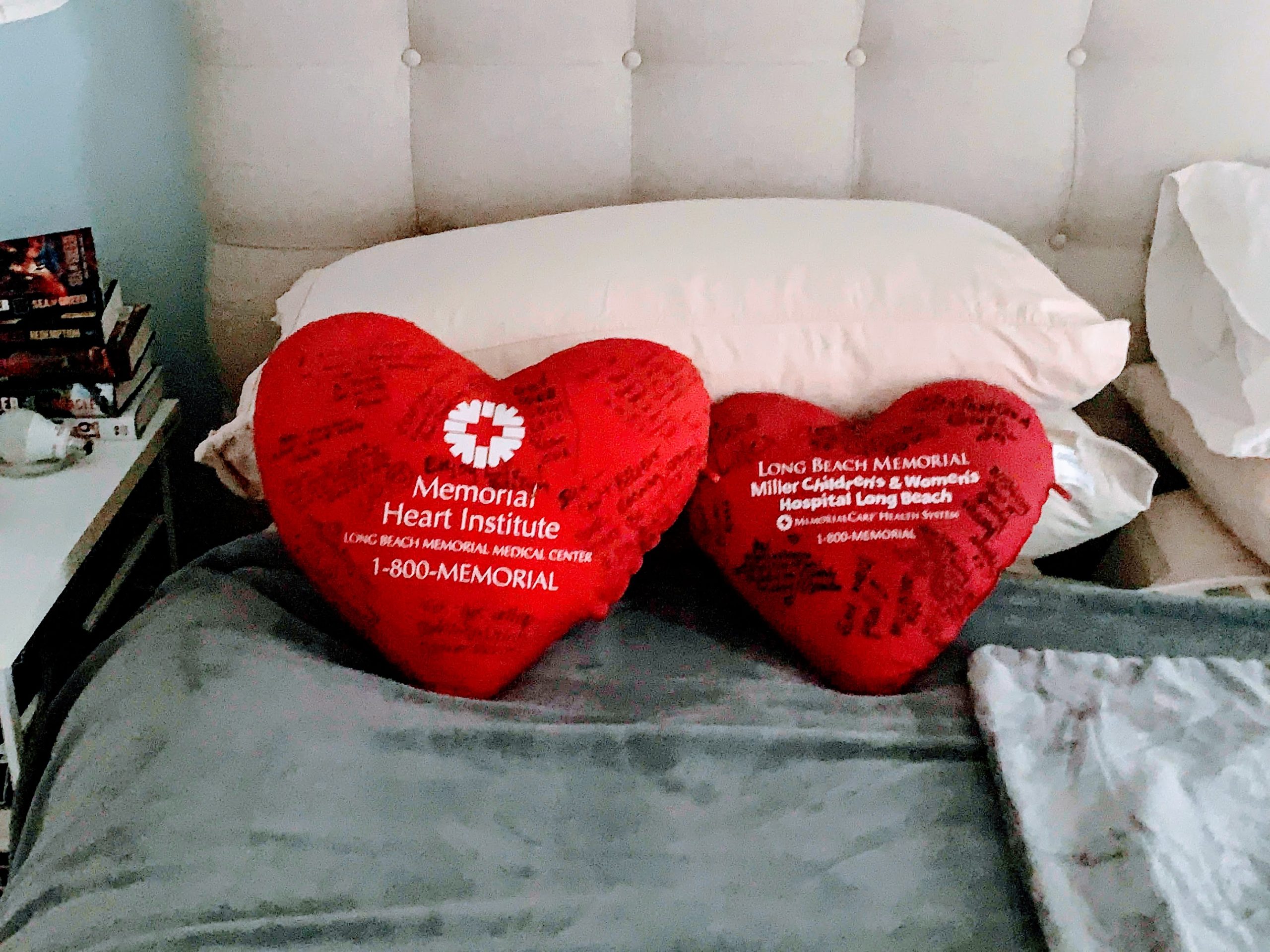 Still two hearts as one!

I remember taking care of Sue after her surgery, she did so well, I was not the least bit worried about my operations.  She was amazing!

Did You Know? Traditionally, surgeons would access the valve by making a 12-inch incision down the middle of your chest and breaking the sternum, or breastbone, in half. You may have heard this called “cracking the chest.” This surgery can take four to six hours to perform, and you’ll need six to eight weeks to recover.

The sternum is wired back together after the surgery to facilitate proper healing. During the healing phase, the wired sternum is vulnerable to the expansion of breathing muscles, which may loosen the wires over time.

Good night all, have a wonderful tomorrow!!!