We often went north to see the Porter’s, Sue’s sister, and family.  We would go up on Friday morning and visit Friday and Saturday, leaving Sunday, making a pass by Stockton to visit Aunt Kay.  We enjoyed those many trips for a long time, but the last year was just too rough on Sue, so we didn’t make it as often as would have liked.  We would take our time and stop at the rest stops, enjoy Andersen’s Split Pea Soup and often stop at the roadside veggie/fruit stands.  I miss those trips with Sue as we got hours to talk about stuff, you know, stuff. 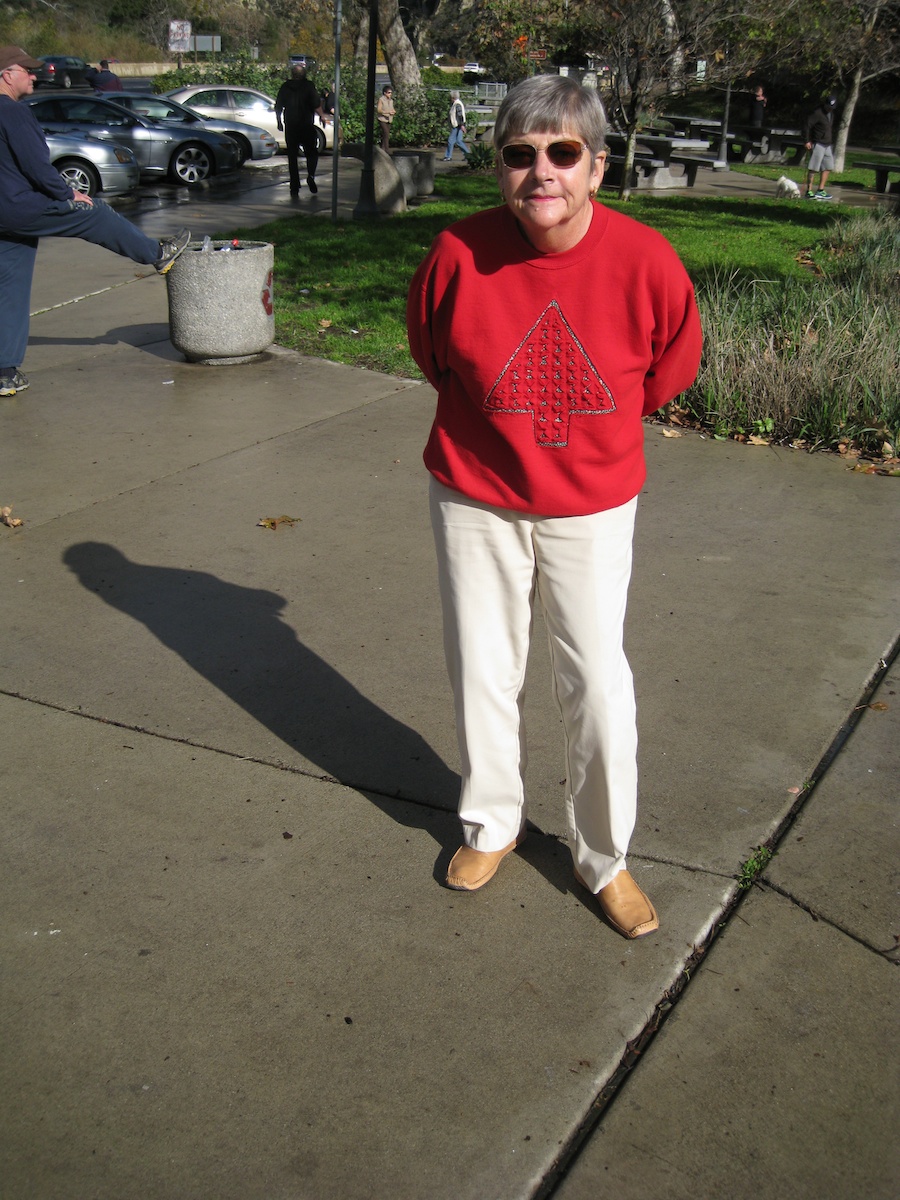 The rest stops were a great place to stretch the legs. 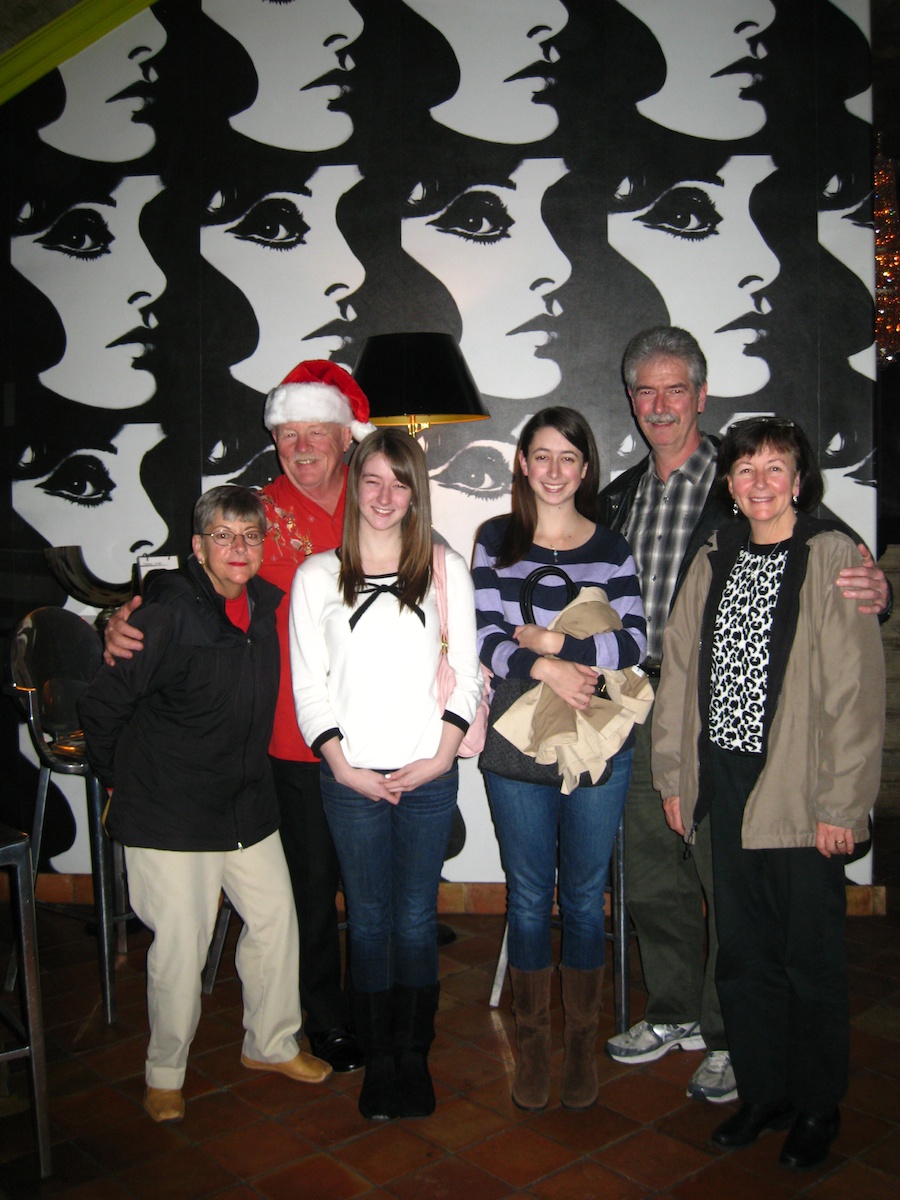 Just about to sit down for dinner at the Chocolate Fondue restaurant in Saratoga. L-R: Sue, Paul, Lisa, Hannah, Pat, and Diame

Well, the chef in me got loose this morning and it was time for bread!  This morning it was simple bread as a refresher course was needed plus the yeast needed to be checked out to assure it was A-OK.  It was my plan to knead it by hand but arthritis in the left hand said, “Please go get the mixer!” 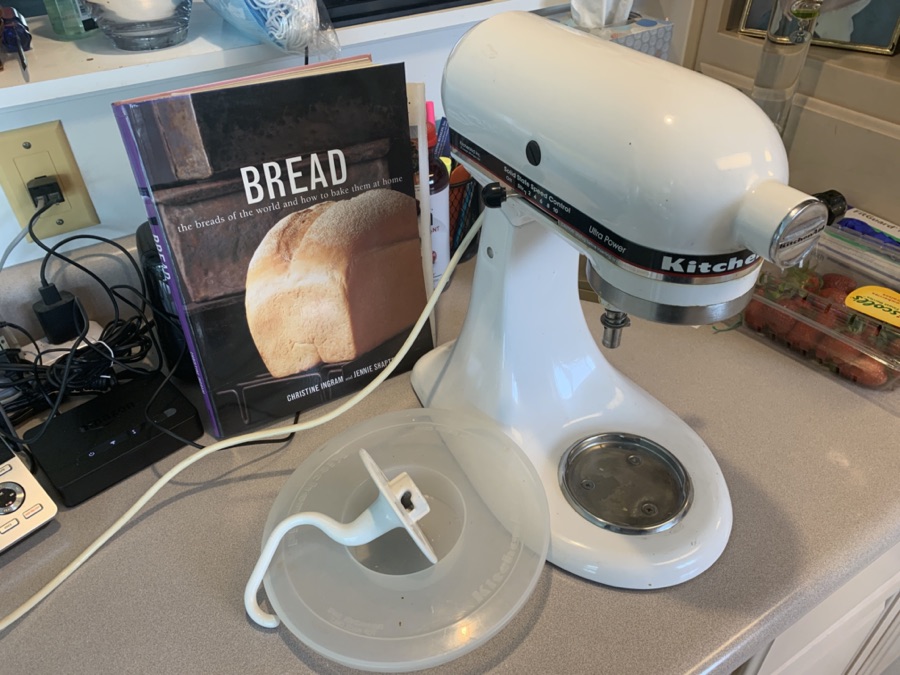 I brought out the heavy artillery!

It was impossible to find bread flour in the markets so to the computer and courtesy of Amazon, King Arthur arrived it’s in the nick of time. The main difference between bread flour and all-purpose flour is a matter of protein. Bread flour, which comes in white and whole wheat varieties, has a higher protein content than all-purpose, usually 11-13%. It’s called “bread flour” because most bread requires higher amounts of protein to produce lots of gluten. 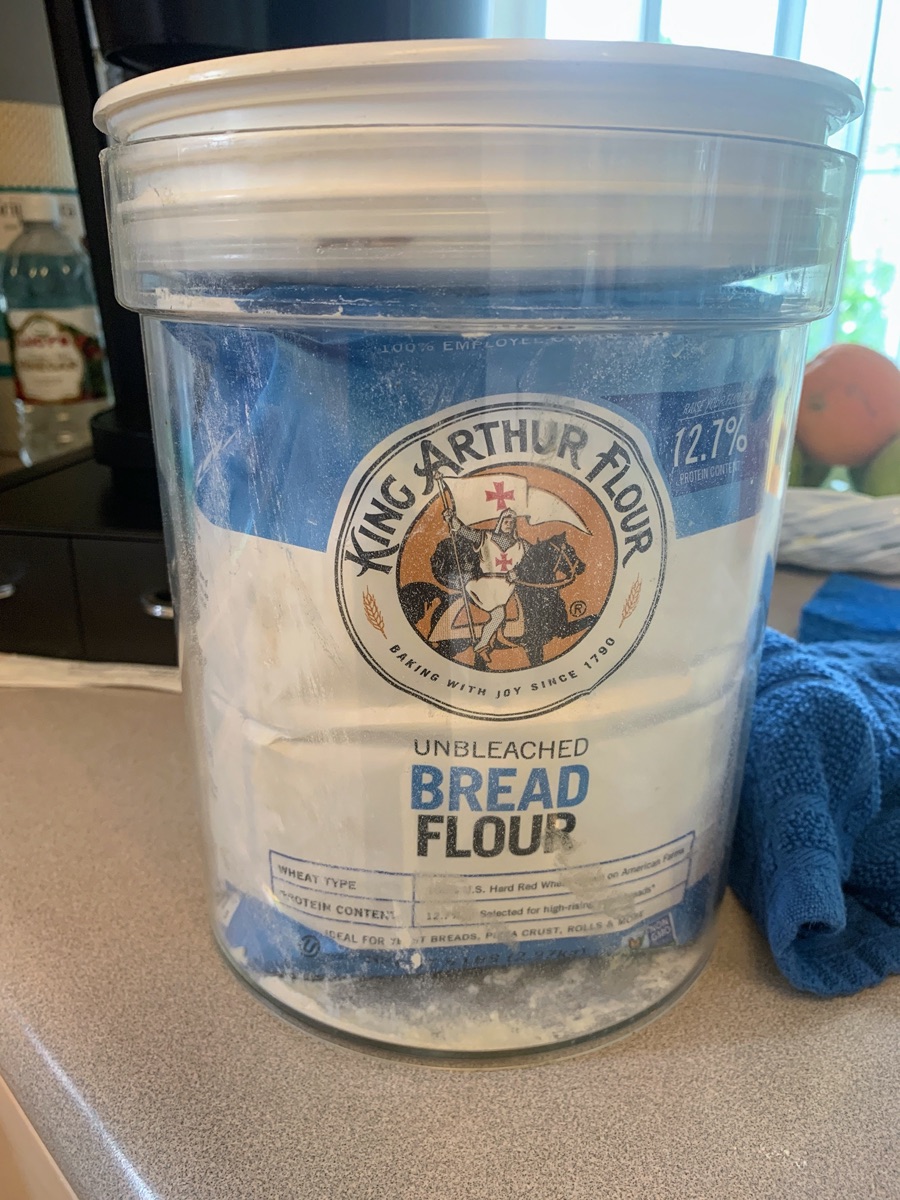 King Arthur has been rescuing bread makers for years.

Into the cauldron went flour, salt, oil, and then went the proofed yeast with warm water and sugar.  Turning on the mixer produced dough as smooth as a baby’s bottom within five minutes!  The large bowl needed to allow the dough to rise was hiding but after seeing the daylight for the first time in years, it was happy to be out and about.  He got a rubdown with olive oil so the bread would not stick. 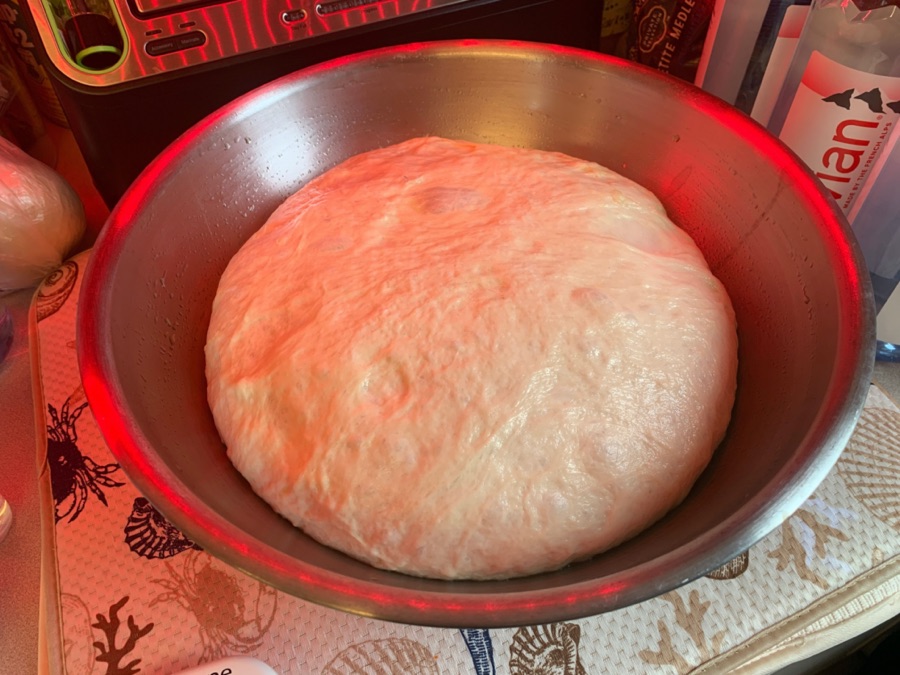 Five minutes in the Kitchen Aid and it was ready to rise!

After “resting” for a good hour, it was time for the fight. Mr. Dough was so full of gas it was my duty to punch him and I did including poking him in the middle with my fingers many times! 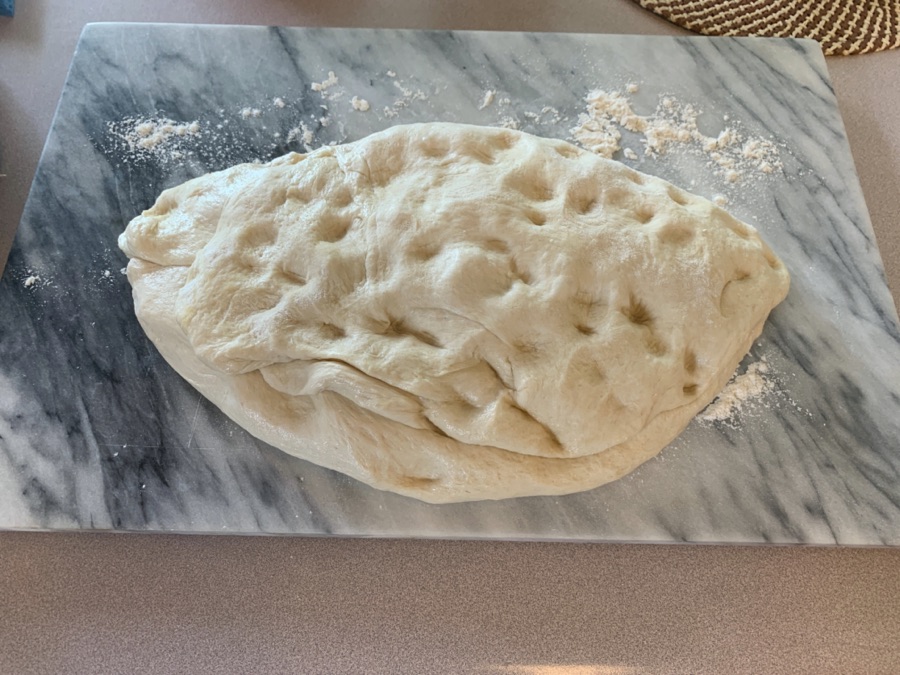 I gave it a finger punch! It worked!

He was so tired after the fight, we kneaded to rest (sorry, it is a play on words) again for about 45 minutes.  After getting up from the rest, forming the bread was undertaken.  It took several minutes to locate the parchment paper as it found an excellent place to hide. 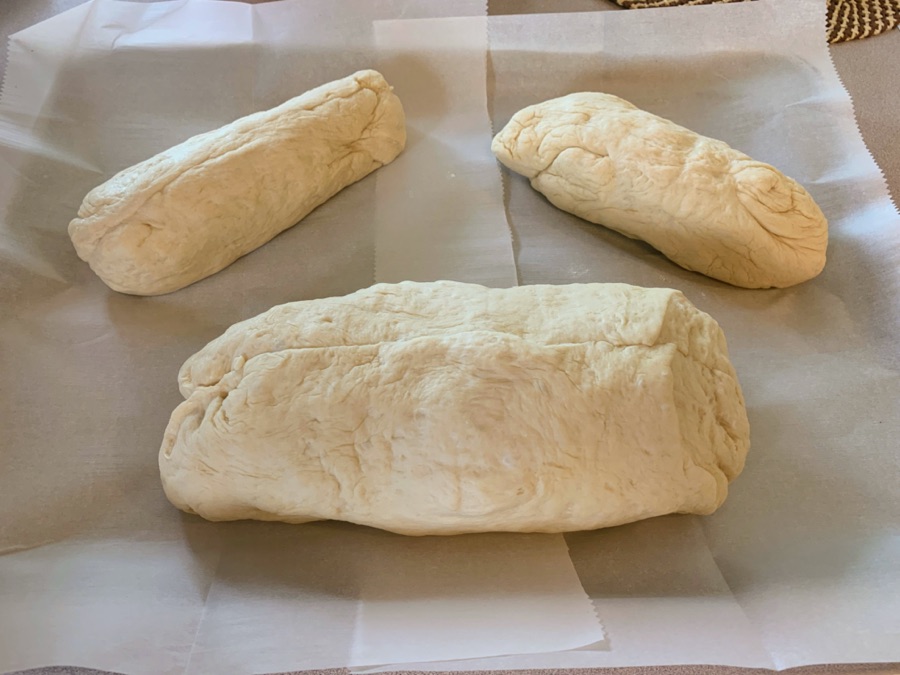 Bread and rolls ready to feel the burn!

Into the oven they went and the blast furnace indicated 400 degrees.  The recipe called for twenty-four minutes so attempting to be careful, I set three different timers with alarms.  I proceeded to go outside and work on the final steps of the board replacement.

After several minutes, the phone rang and it was Joe, my son, who was going to come over to help me.  We yakked for quite a while and then I remembered, I had bread in the oven!

Visions of three charcoal blocks flashed through my mind.  I yelled and ran into the kitchen wondering why I did not hear the alarms.  Well, they were impossible to hear as they were all set but dumb me forgot to turn them on when the oven door was closed!

I decided to watch them brown and not depend upon the timers.  Joe and I talked while they got golden! 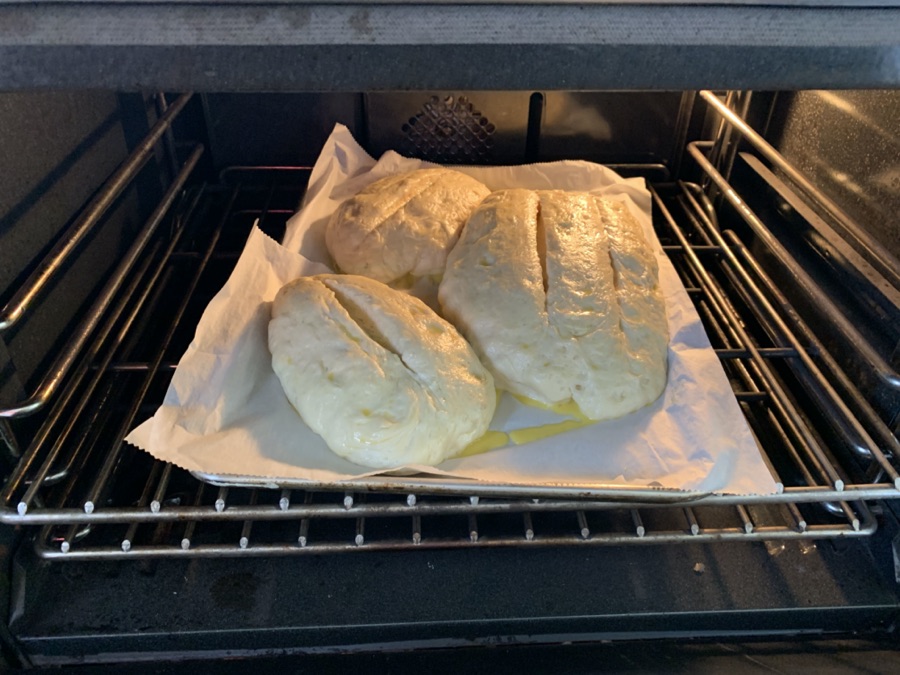 They were almost too fat to go in the oven.

The crust was forming quite nicely so out they came onto a wire rack and Mom’s trivet which I kept for the past thirty years. 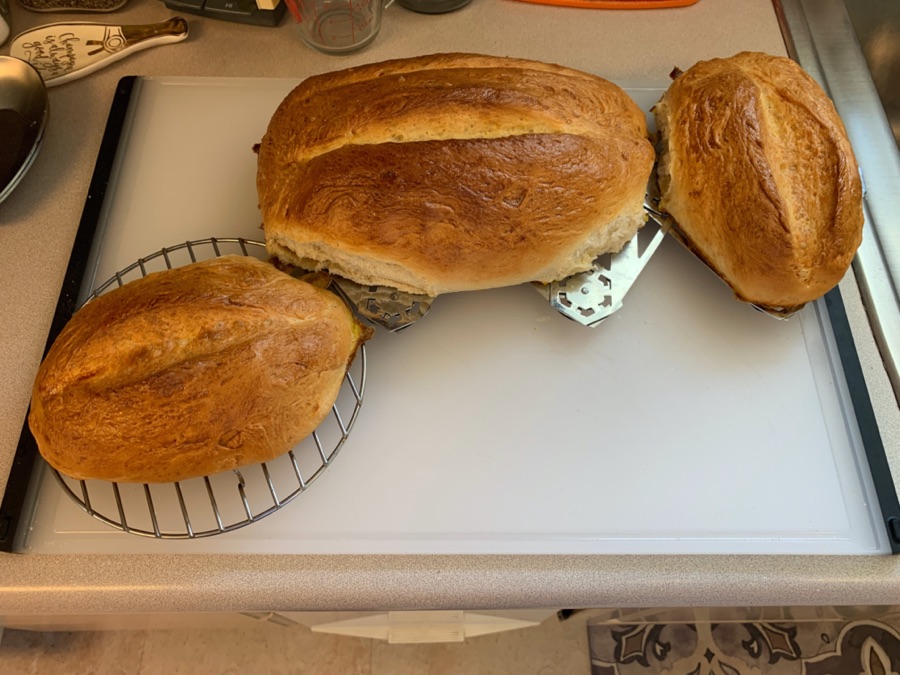 Blowing my own whistle, they looked pretty good, considering it has been close to 15 years since I last made bread (not using the bread machine). 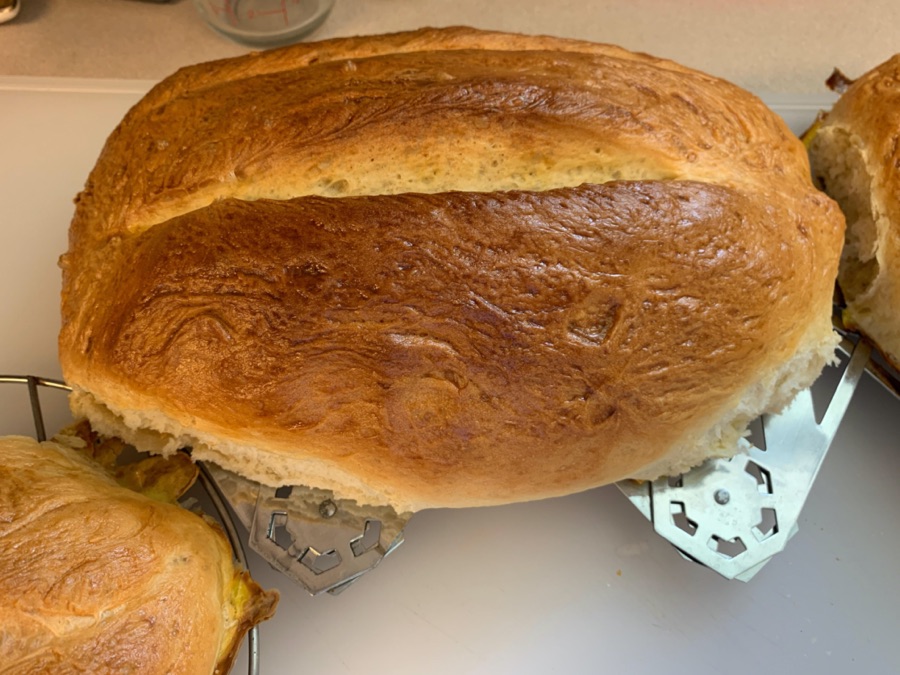 The amount of bread was more than I needed so the big piece was wrapped carefully in foil and transported next door into the hands of Vicky!  About an hour later, the iPhone buzzed, burped, chirped, and vibrated meaning a message had arrived.

Below is the image she sent along with a Vicky-like message (she is a very funny person).  She was quite right, the honey idea was excellent. 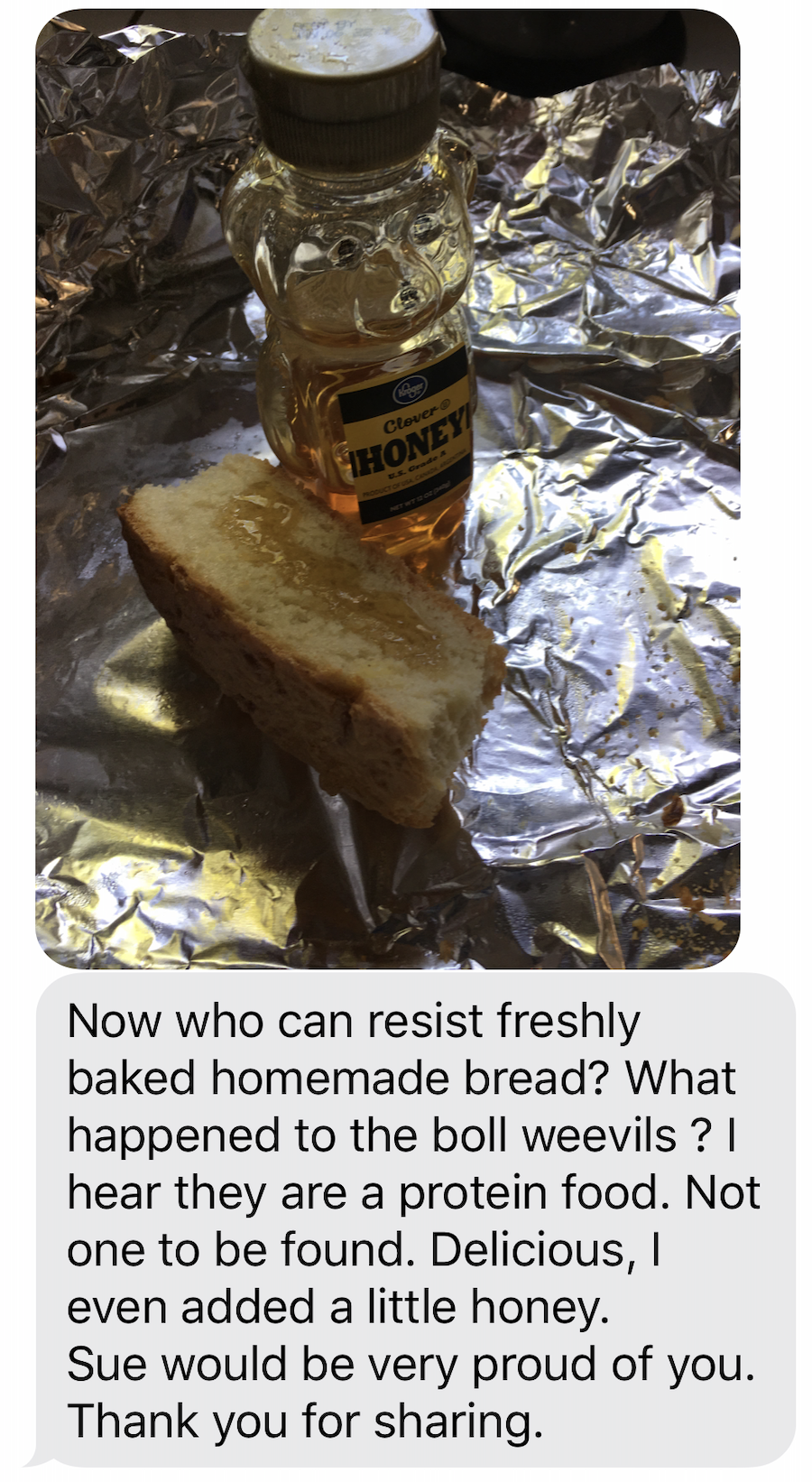 Vicky sent me a note back after I gave her the big load of bread.

A smile appeared on my face appeared which was carried the rest of the day!  Thank you Vicky!

So, back to the termites and the first-board!  After some additional strategy and the use of two pry-bars, the board finally slipped into place using a big rubber ballot! 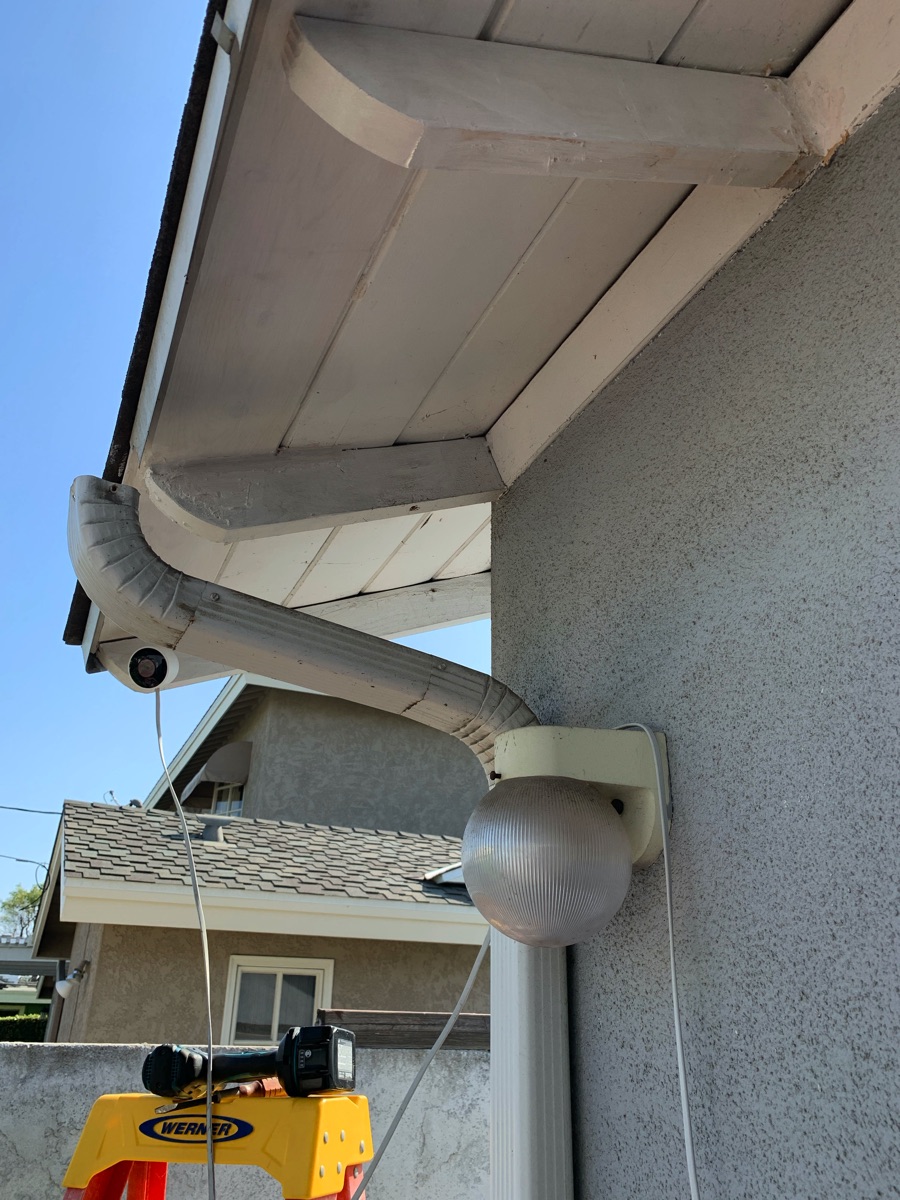 I made the first-board fit but it took all I had.

The iPhone again did its little dance.  It was Carri Fox, our dance instructor, and friend, notifying me she was on her way.  We visited on the patio for a good hour recalling the past, discussing our friends and classmates, and other trifling items.

She asked if I had any knowledge of a simple blog system so that is now in my research list.

It’s now six o’clock because the Bat Phone rang and it was Colleen.  We talked for a while as she was about to hit the sack.  After the phone call, I put on my walking shoes and headed out the door adding another 2 miles and 6000 steps to today’s exercise. It was late in the day and the Japanese maple tree was spotted, so a picture was taken and forwarded to Robin. 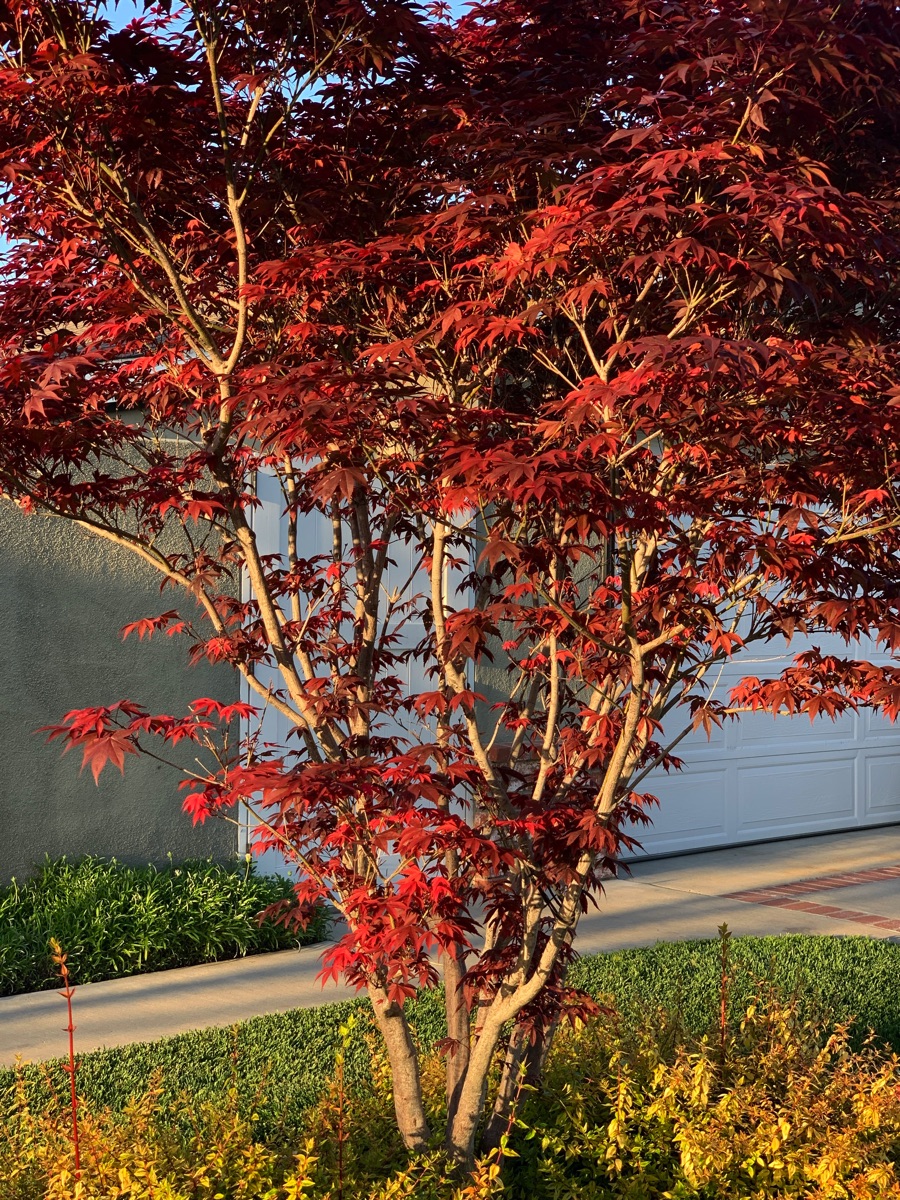 Walk time and the Japanese Maple was glowing in the sunlight.

Around the corner was a rather large trumpet plant.  Listening carefully, there was nary a smidgeon of sound terminating from this magnificent plant. Having no experience with brass instruments, the horns were left alone and the walk was continued. 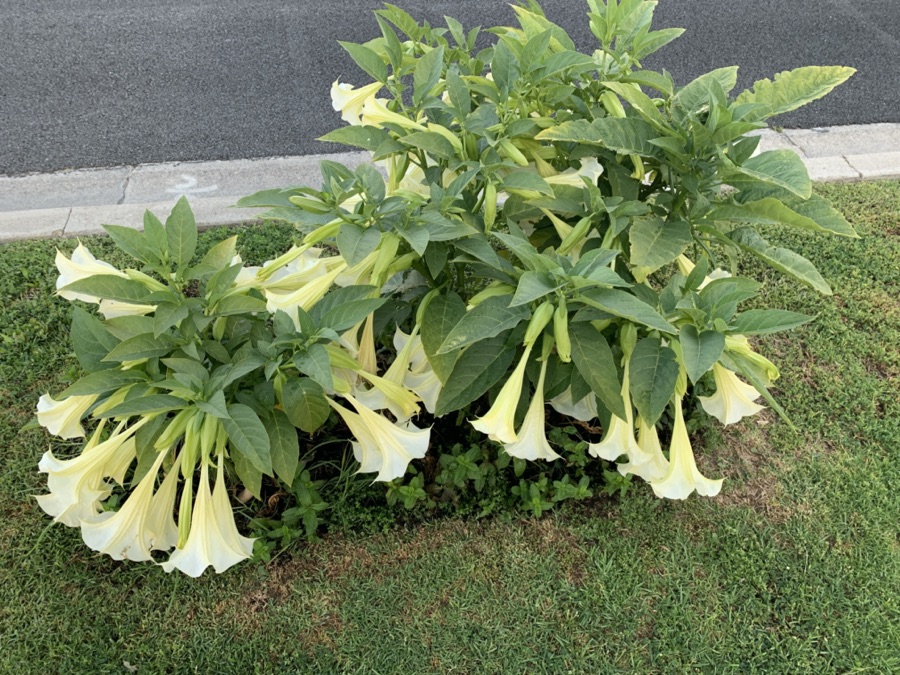 Returning home it was time for a shower and a little TV before crashing. I worked on the computer for a while, watched some TV, and pulled up stakes around 10:00 PM.  The time after 5:00 PM is the loneliness for me as that was our sit together and walk time.  Things will get better.

For whatever reason, Dan Seals popped into my head as Sue and I liked to dance to this tune.  It just seemed to make our feet move without effort.

Just an old retired guy trying to finish out my last years on this planet. I lost my best friend and wife in early 2020. I was blessed again by reconnecting with Dr. Mary Côté, a long-time friend. Mary and I got married July 28th, 2021, and are enjoying life together and plan to spend the rest of our lives being a blessing to our friends and family.
View all posts by Paul →
This entry was posted in Cooking, Friends, Walking, Working Around House. Bookmark the permalink.