It Was Ten Weeks Ago Today When My World Collapsed!*

Why does it take a minute to say hello and forever to say goodbye?

We were part of the “regulars” at Disneyland every Saturday night.  We would dine at Catal and then head off to dance at the Carnation Plaza for hours and hours.  We would return to Catal for a nightcap before wondering home with tired feet (the dance floor was marble). The folks behind me were Barney and Margo who became super friends over the years and would travel with us to Catalina to dance at the Avalon Ball. I remember those evenings like it was yesterday and I felt so special when people visiting the park would stop and say something to us about our dancing. I miss dancing with my wonderful bride every day! 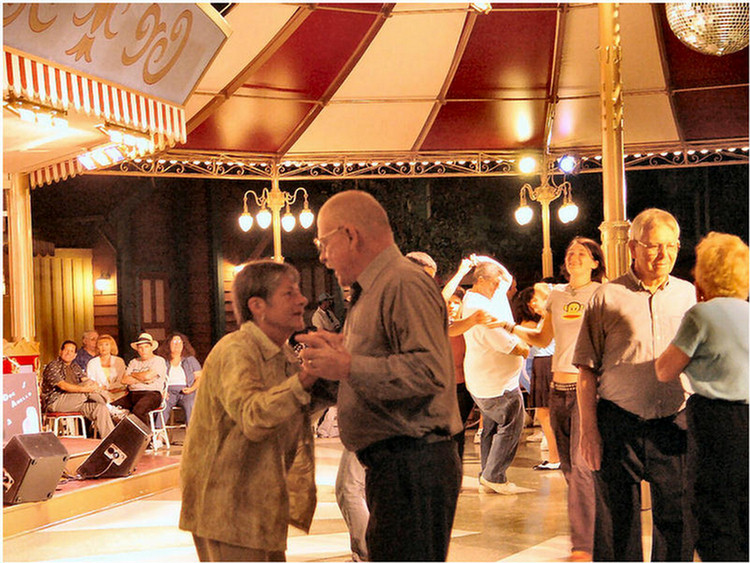 * It did indeed collapse but Sue and I talked about this potential, and she would be angry if I didn’t move forward and attempt to be normal.  I will honor our agreement with a tear in my eye!

The day must start and I went directly to the computer about 7:00 AM and researched more about fixing termite damage.  I came up with a modified strategy and later that morning, it worked!

While on the computer, I pulled up and save about ten bread recipes which I plan to use starting tomorrow.  Sue’s Mom taught me to make bread and this morning I got twelve packages of Fleishman’s Dry Activated Yeast in the mail! I am ready to go!

My weight was worrying me so I tippy-toed onto the scale so as not to make him upset.  With the precision of a brain surgeon, I tapped the “tell-me-the-news” button and as a message from the sky, I was under 200 pounds again!  Another ten pounds should be possible by mid-June and then I shall maintain! 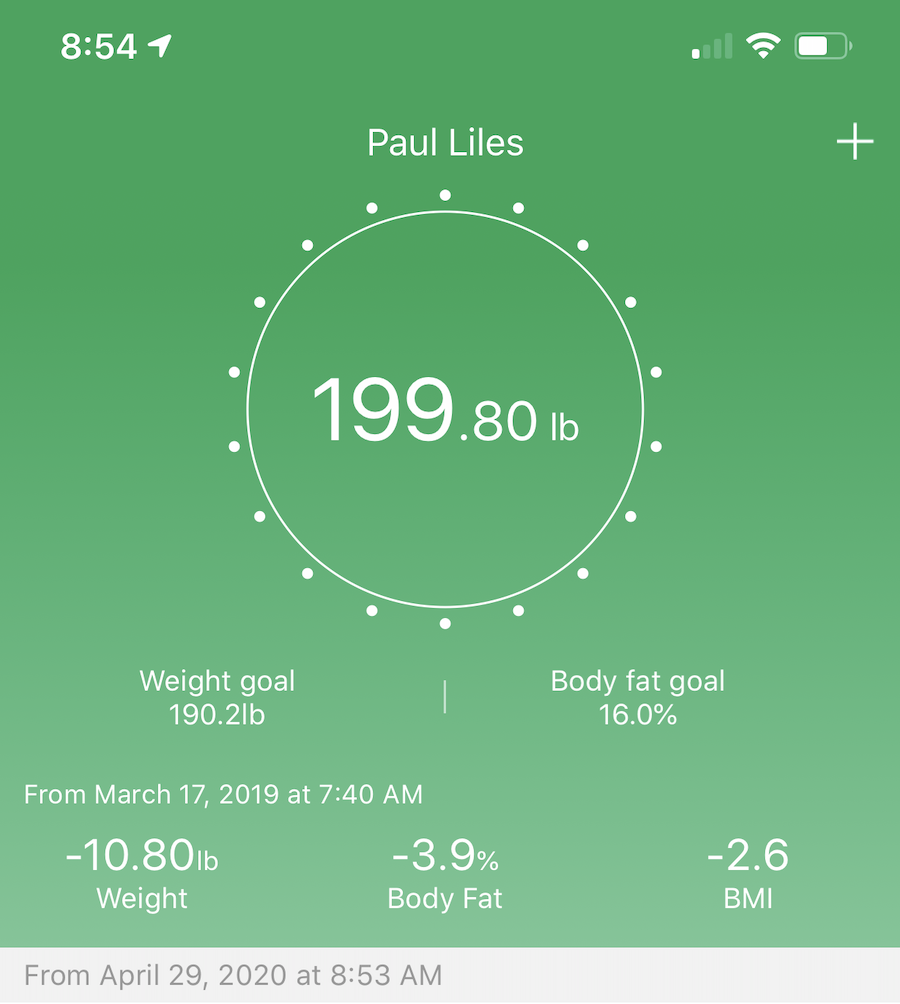 Now to serious work.  I took the Dremel Saw-Max and set the blade for precisely 3/4″ depth and ran the saw upside down about ten places under the eves.  Like my masterplan called for, the first-board was easy to remove.  I struggled with a few of the nails but that was overcome by the reciprocating saw which went through the nails like a hot knife through butter. 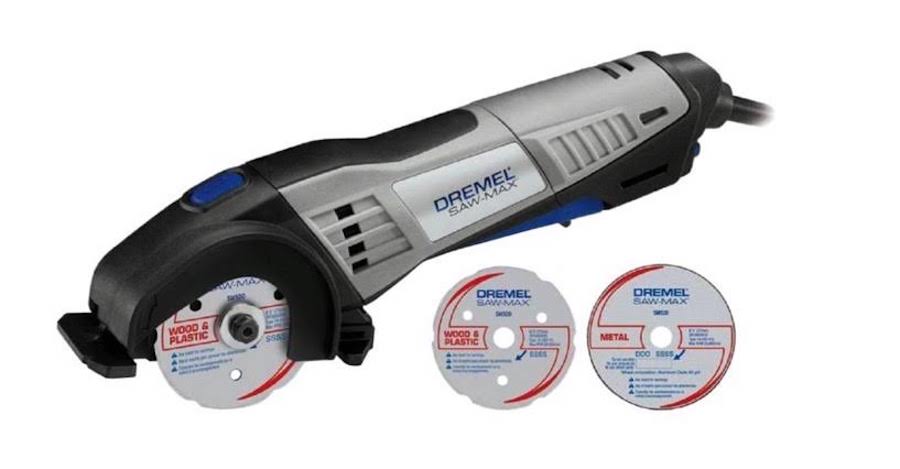 Dremel to the rescue!  It was on-sale last year and I bought it not knowing why I might need it.  It was a lifesaver this morning!

As soon as the board was down, I heard the cry of the Grey Ghost starting up!  I wasn’t even in the garage.  He knew it was time for a Lowe’s run for a ten-foot piece of 3/4″ ship-lap.  That there is what I call a “Smart Car”.

Off we went in a cloud of sawdust but to our surprise, Lowe’s did not carry such an item.  Their equivalent was only 1/2″ thick.  The ol’ Grey Ghost knew what to do (he is smart) as he pointed his nose back home but made a stop at the Ganahl Lumber Company just a few blocks from our home.   They had exactly the piece I needed already cut to ten feet. 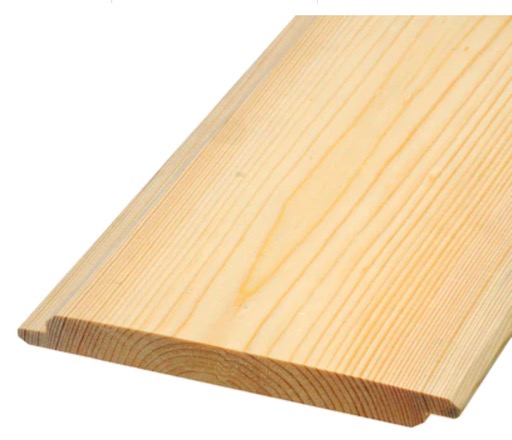 Early shipbuilding methods may have used a form a shiplap to construct the hull of a ship. The boards overlapping each other formed a watertight surface, which would make the vessel seaworthy.

Step #2 today, paint the board.  I primed the wood as soon as I arrived home. Priming is necessary when dealing with bare surfaces that are very porous, such as wood, metal, drywall, or masonry.

While working away, I was scared to death as the sliding glass door opened behind me!  It was Domilita (Domi), my housekeeper!  I had forgotten it was Wednesday.  After crawling back into my skin, I chatted with her for a while.  She plans to bring me some more of the hot pepper sauce next week. Note to self: Buy two quarts of vanilla ice cream!

It was a nice sunny day so the primer dried quickly and therefore the wood got it’s final coat soon thereafter.   I prepared lunch meaning I found the beef stew from last week and tossed it in the nuker for tree minutes.  It was nice and hot and tasted sensational.  I could not finish it all but I was full the rest of the day. 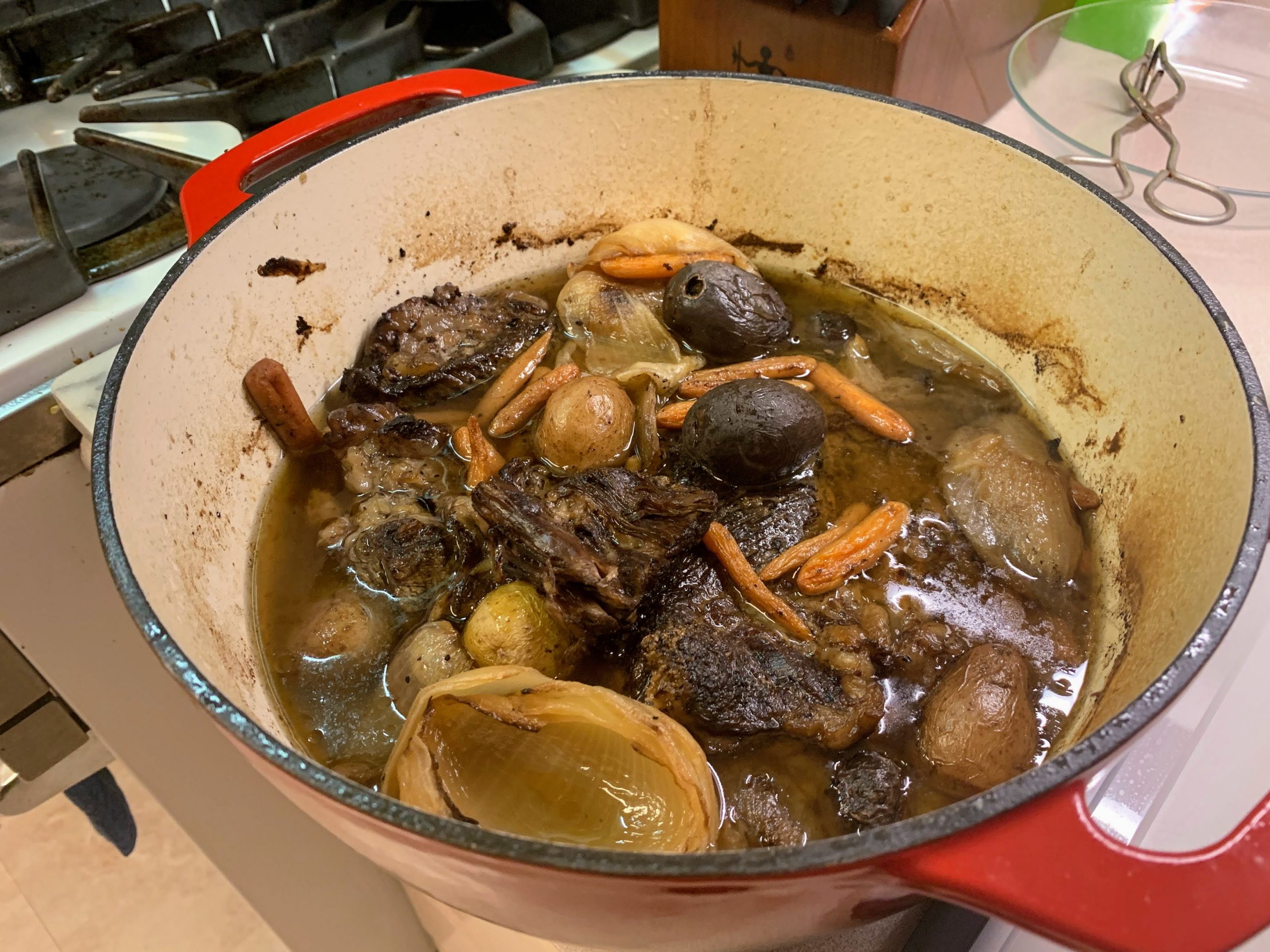 A little bit of pot roast goes a long way!

Before Marianne and Craig arrived, I attempted to put the first-board in its place but I met with failure.  While one end went in fine. the board would not slide in easily.  I will try again tomorrow but I may have to ask Joe (my son) or Zackary (my grandson) to pop-by and use some leverage to force the board back in place.  If I were an octopus it would be easy! 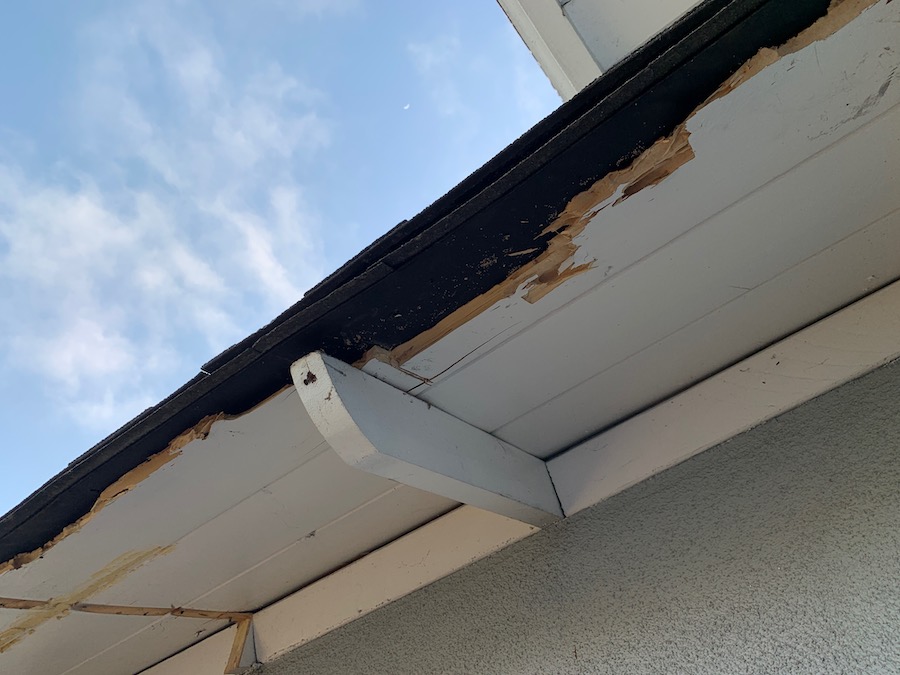 After the saw cuts, the termite damaged board came out easy. Putting a new one back in provided harder than I thought.

It’s two o’clock so I needed some last-minute items from Ralph’s.  In today’s world, I needed plastic wine glasses.  To offer my guests something, I got a package of fresh strawberries untouched by human hands.  A new bottle of red wine was needed and Kendal Jackson came to the rescue. Returning home, I put out the red wine and the necessary “virus-visit” equipment (gloves, napkins, six-foot distance markings, etc.).

Into the shower to get some of the sawdust out of my hair (yes, I now have enough hair on my lead to hold sawdust).

Craig and Marianne were right on time.  We say in the patio and talked for quite a while.  They have been dancing with “The Gang” for years now.   Marianne was been working a very difficult problem; remembering all our family relationships.  Today she was 99% there; I give her an “A”.  All she needed was Joe’s children’s names and Cassie’s children’s names.  She knew everyone else including Mitch and Luisa, Pete and Lisa, Lilly and Remy; I was amazed!  She even remembered Mitch’s ex-wife’s name! 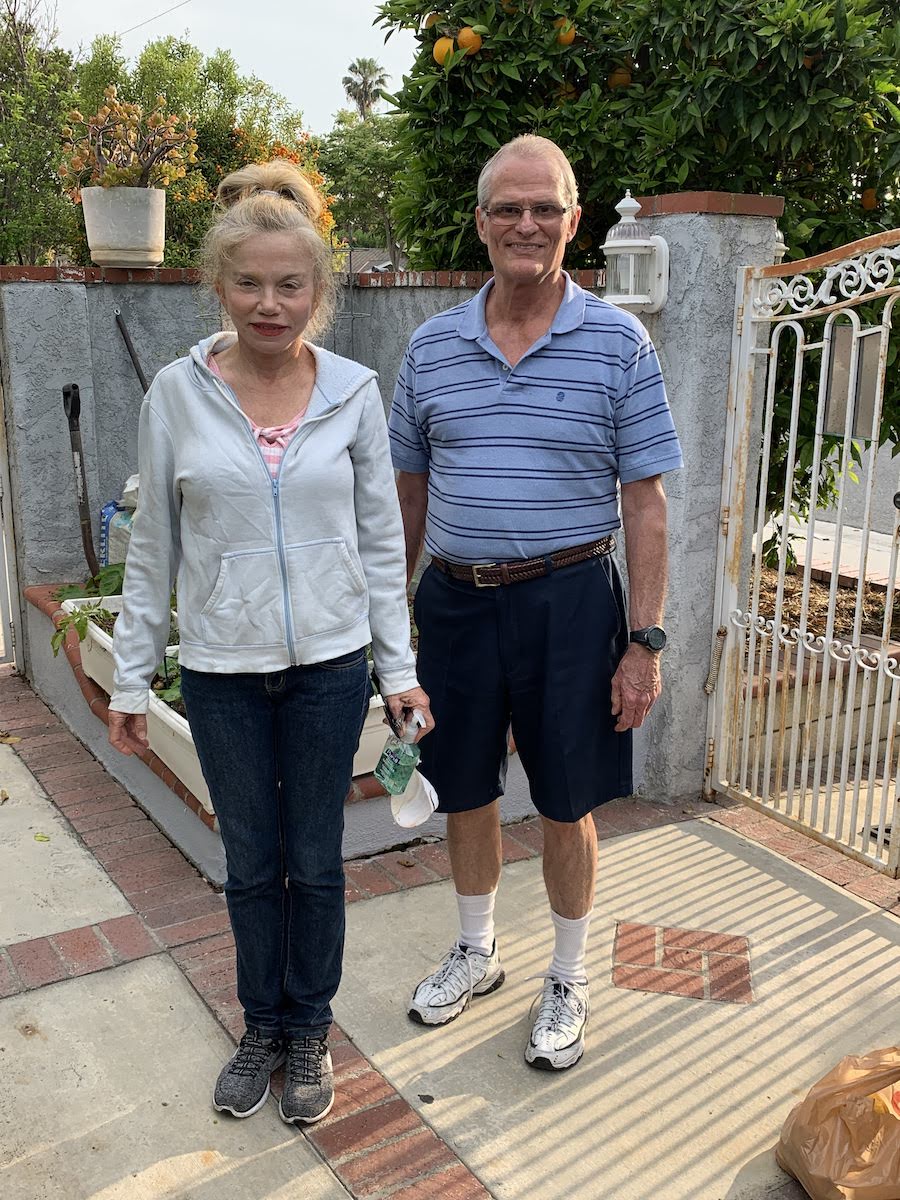 Marianne and Craig come to visit.

We decided next Tuesday, they are coming over to join Robin and me in watching John Wayne’s “True Grit”.  I must remember to find my cowboy hat which I think is in the garage.

Just after they departed, I got a call from Miss Vicky and she had made some spicy chicken but Del could not handle the heat.  She was so kind as to try to burn my tonsils with her offerings.  Ha! I tore into that container, along with homemade chips, like a hungry Lion dining on a Wildebeest!  It was a one-person feeding frenzy.

After the frenzy subsided, I called Vicky for a “fence-visit” to say “Thank you!” and apologize for any weird sounds that may have escaped my kitchen during the brutal attack on her container. (I was hoping I did not scare her grandkids). 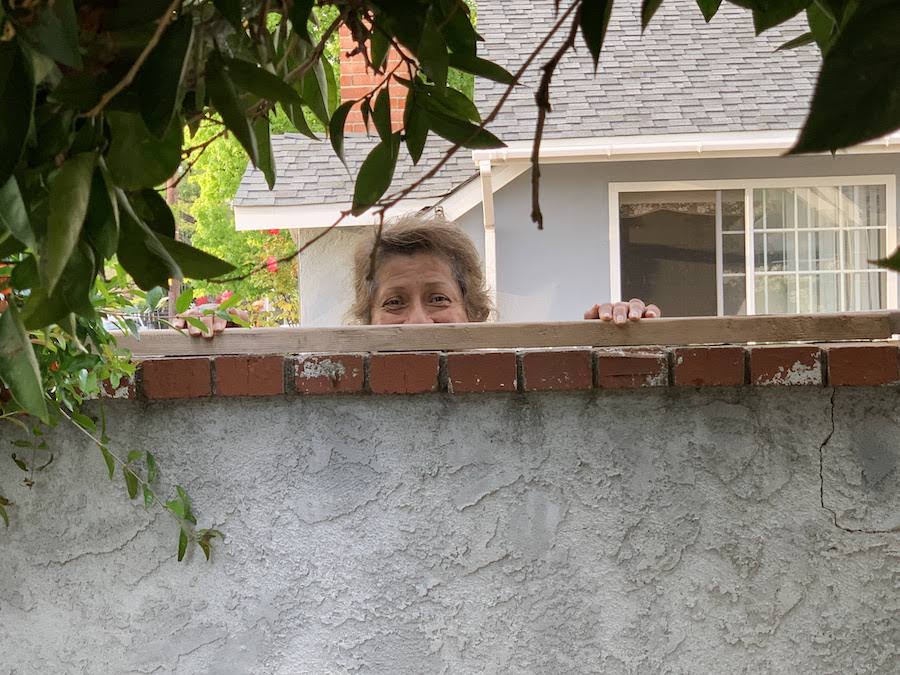 It is assumed everyone knows Kilroy and Wilson? 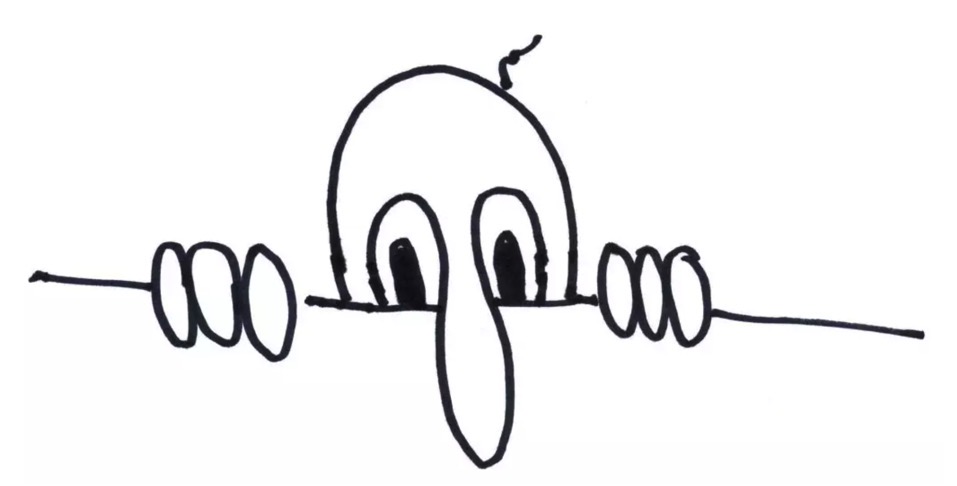 Returning the patio to normal, I stopped to take a quick picture of my favorite subject.  She is in many pictures around my home and always will.  I was so lucky for over thirty years. Tear time! 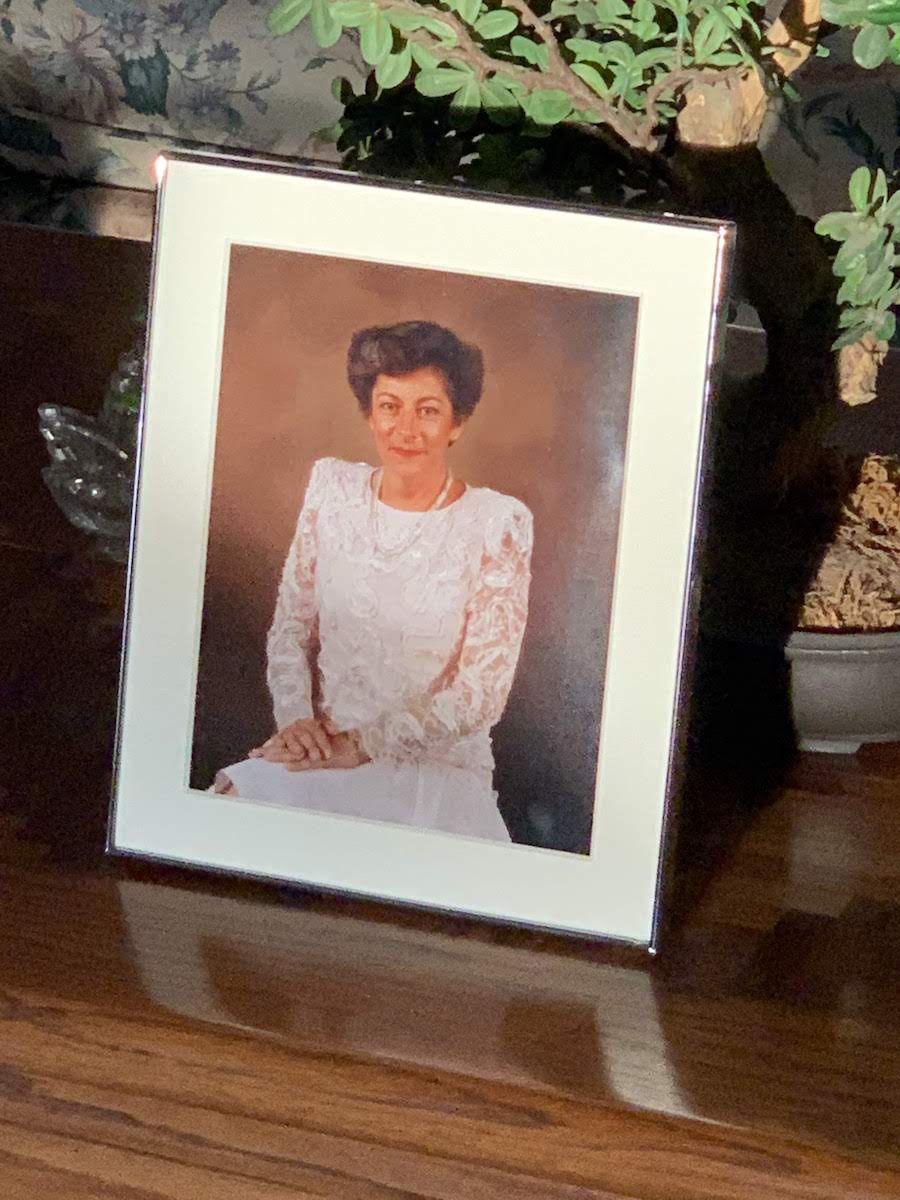 Always on my mind!

The Sun is dropping in the western sky so I have about thirty minutes to strut-my-stuff around the hood.  The iPhone is charged, the pedometer is zeroed, and Statler Brothers are playing in my ear so, “Eat My Dust!”

First stop, the nearest rose bush. Mother Nature is so distracting. She just gets prettier and prettier with each step. 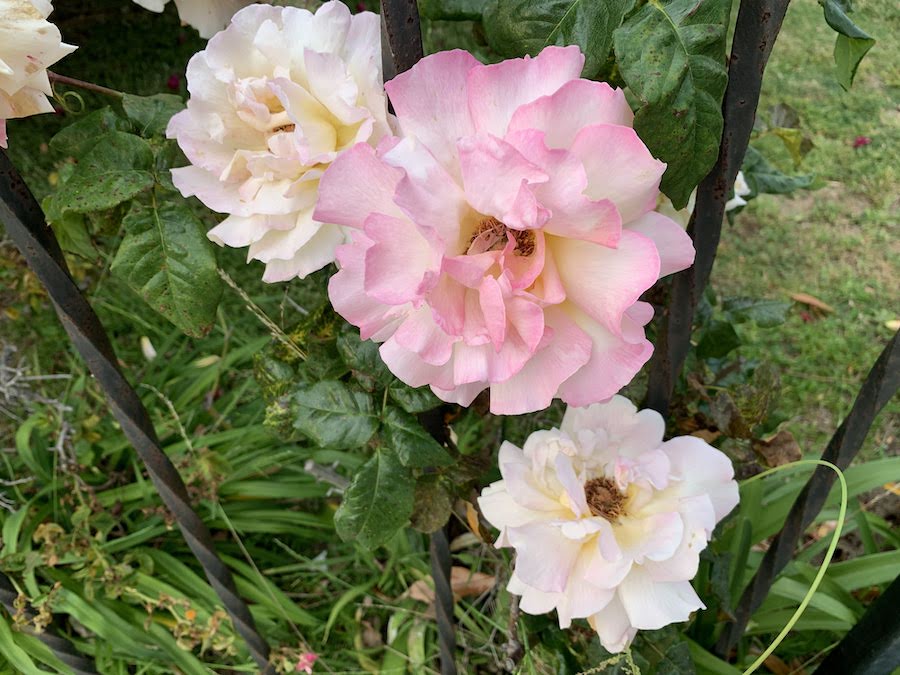 A glance at the sky caused me to quicken up my pace as I forgot to charge my batteries and did not want to walk at night without my running lights showing. 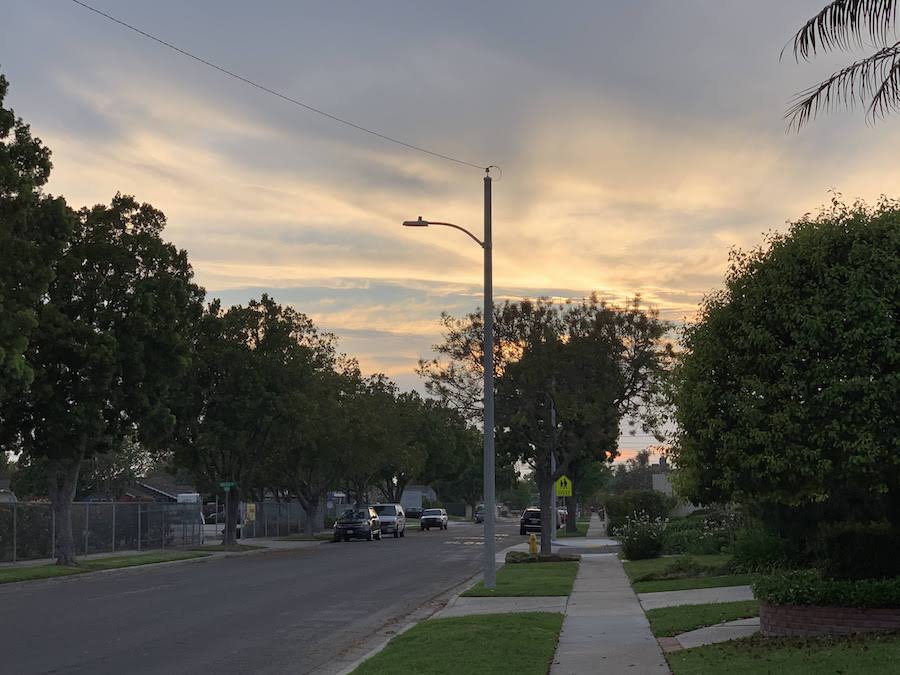 Sunset cometh and so the evening.

I made it home just as Ol’ Sol took his last breath.  I heard the steam from the ocean waters and like that, it was dark! 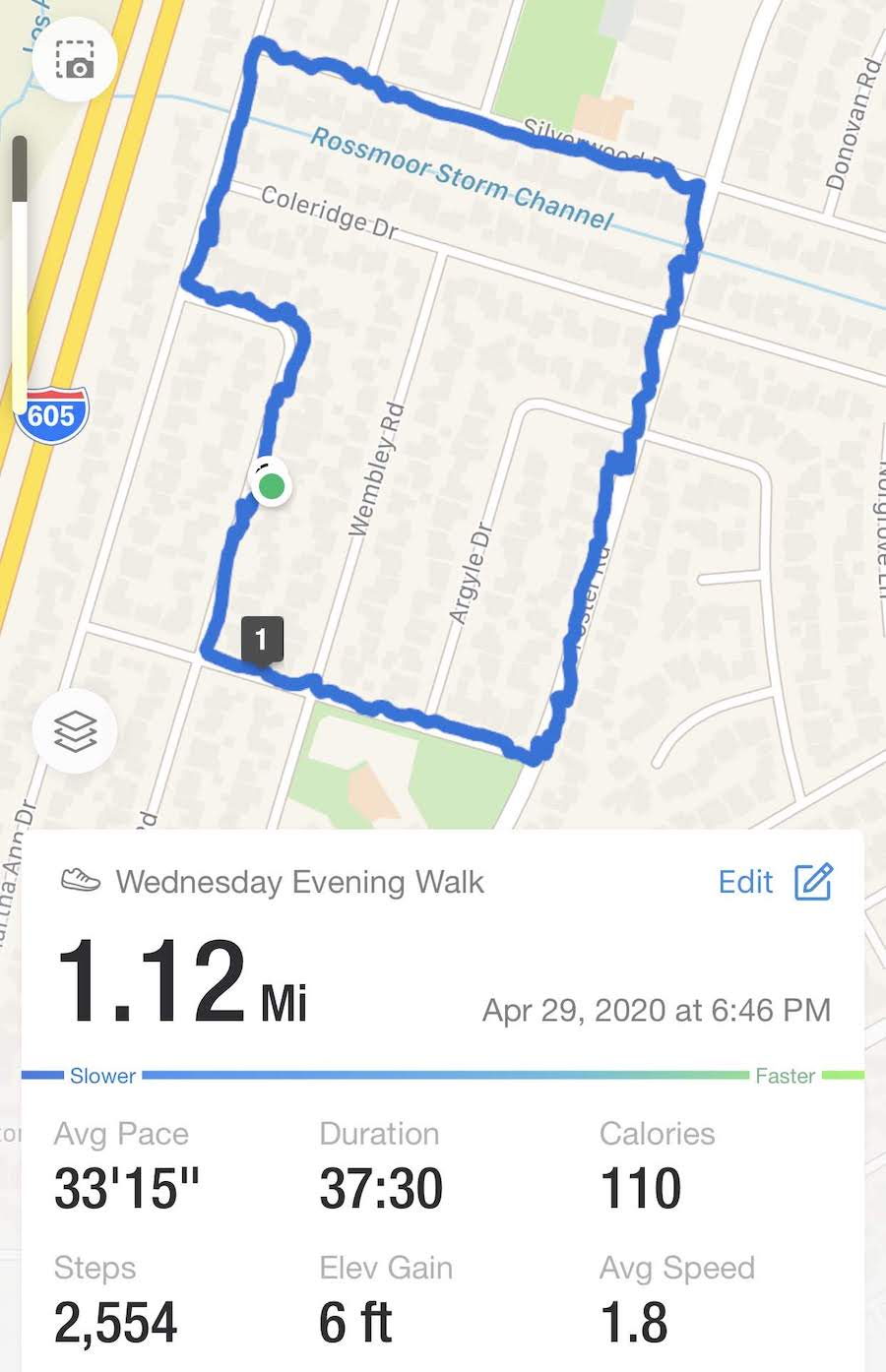 It was short but sweet!

So the map does not look great today BUT one must consider all the walking I do around the house when working in the garden and fighting the termites.  That adds another 5,000 steps and 1.4 miles to the daily activities which is OK considering I had company! 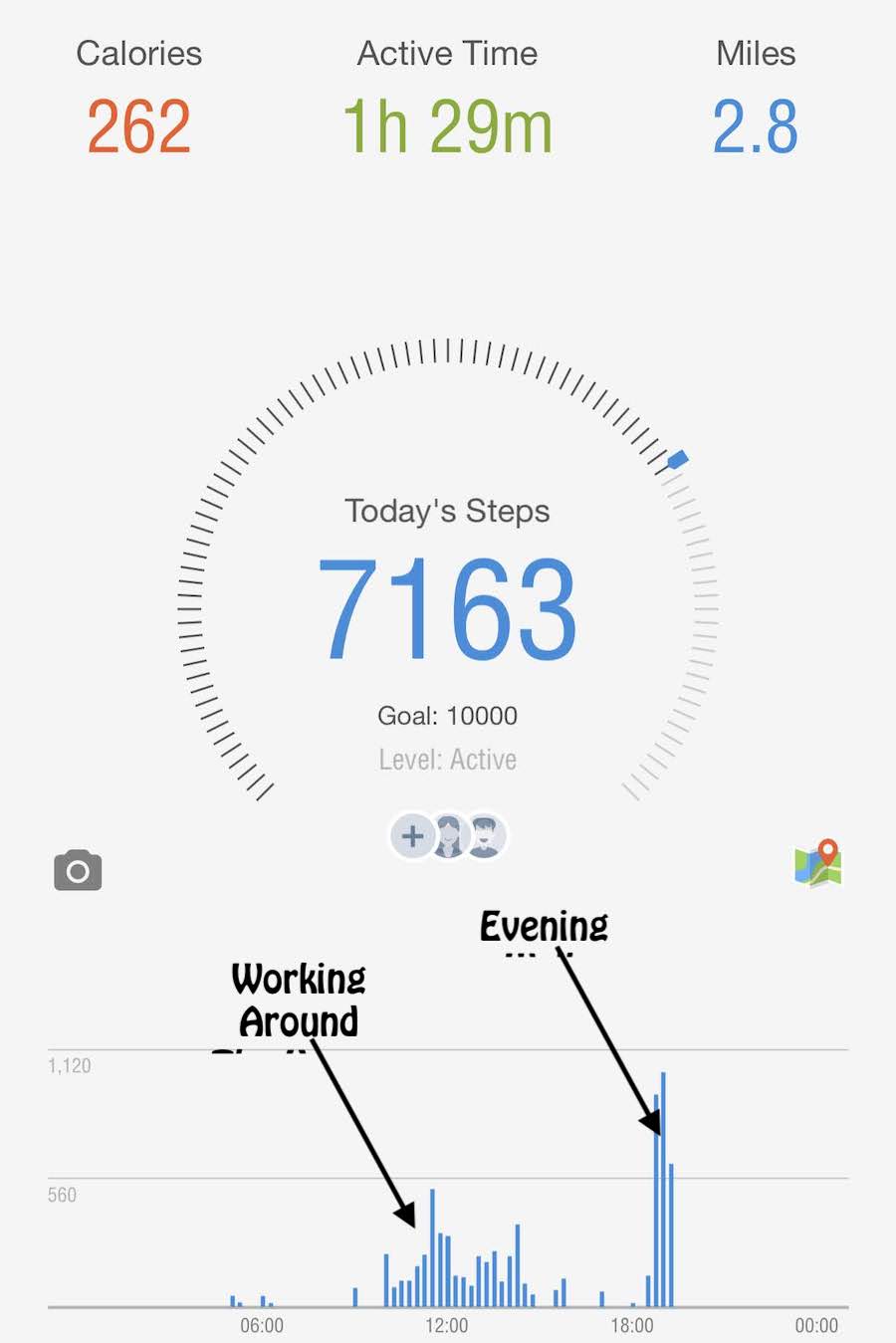 Mr. Kuerig brewed me a cup of coffee and I settle in watching a movie until about 9:00 PM when it was approaching bedtime.  I crashed at 10:00 PM but I paid for that the next day as my eyes popped open at 4:00 AM Thursday!

Just an old retired guy trying to finish out my last years on this planet. I lost my best friend and wife in early 2020. I was blessed again by reconnecting with Dr. Mary Côté, a long-time friend. Mary and I got married July 28th, 2021, and are enjoying life together and plan to spend the rest of our lives being a blessing to our friends and family.
View all posts by Paul →
This entry was posted in Food and Wine, Friends, Walking, Working Around House. Bookmark the permalink.