Nothing could stop this lady.  We were always doing adventures! We traveled by hot air balloon over the Australian outback, rode narrow-gauge railroad’s through the forest of northern Australia, rode motorcycles in New Zealand, did jungle tours through Costa Rica, paddled kayaks in Alaska, traveled via seaplane through the Norwegian fjords, rode horses in Arizona, traveled 25 miles by stagecoach in Nevada, rode the Grand Canyon Railway, visited the bats in the Carlsbad Caverns, rode in an airboat in Florida, toured submarines in San Diego, walked the deck of the USS Midway and USS Intrepid, and below, cruised to Catalina on the SS Lane Victory.

Always a genuine curiosity about the world she lived in, she had great questions for the tour guides/docents.  In fact, Sue and the Master of the Lane Victory talked for 45 minutes on one voyage.  He wanted to know about GPS, and she wanted to know about the pre-GPS navigation techniques. Sue was a fantastic person, and I was lucky enough to have her as my best friend and adventure companion. 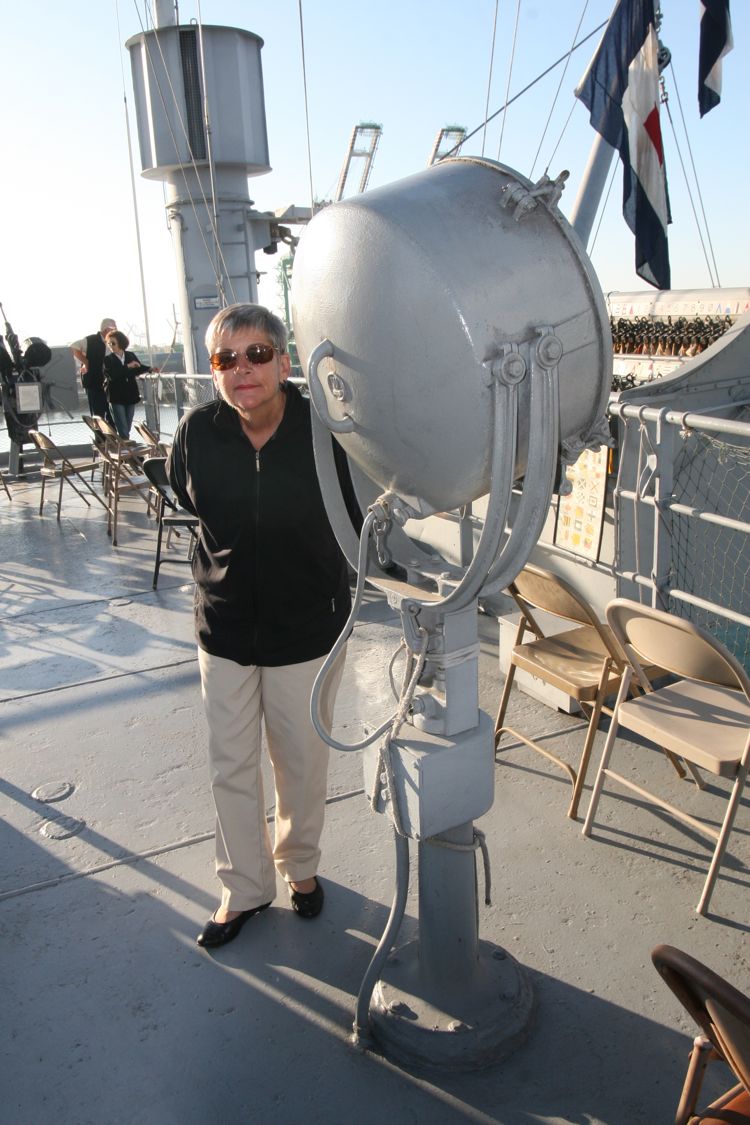 Adventures was the name of her game! Sue, like everything and the picture below, is one of many tripes on the SS Lane Victory, a living history lesson.

Did You Know? Lane Victory was built in Los Angeles by the California Shipbuilding Corporation and launched on May 31, 1945. On her first voyage, June 27, 1945, Lane Victory carried war supplies in the Pacific. The War Shipping Administration gave the operations of the ship to the American President Lines. United States Merchant Mariners operated the boat. The United States Navy Armed Guard, who manned the ship’s guns, worked as signalmen and radiomen. She made two Pacific cruises, beginning July 10, 1945 to Manus Island, and the second starting August 30, 1945 to Guam, Saipan, and Hawaii. The trip to Guam was to bring food to the island. On the way, Lane Victory sailed through a typhoon and was tossed around for 14 days. On February 27, 1946 her second voyage ended. With the end of World War II, she started shipping aid. In March 1946 she began delivering goods to Europe under the Marshall Plan. With the end of the aid plan, on May 11, 1948, Lane Victory was laid up at Suisun Bay, California. 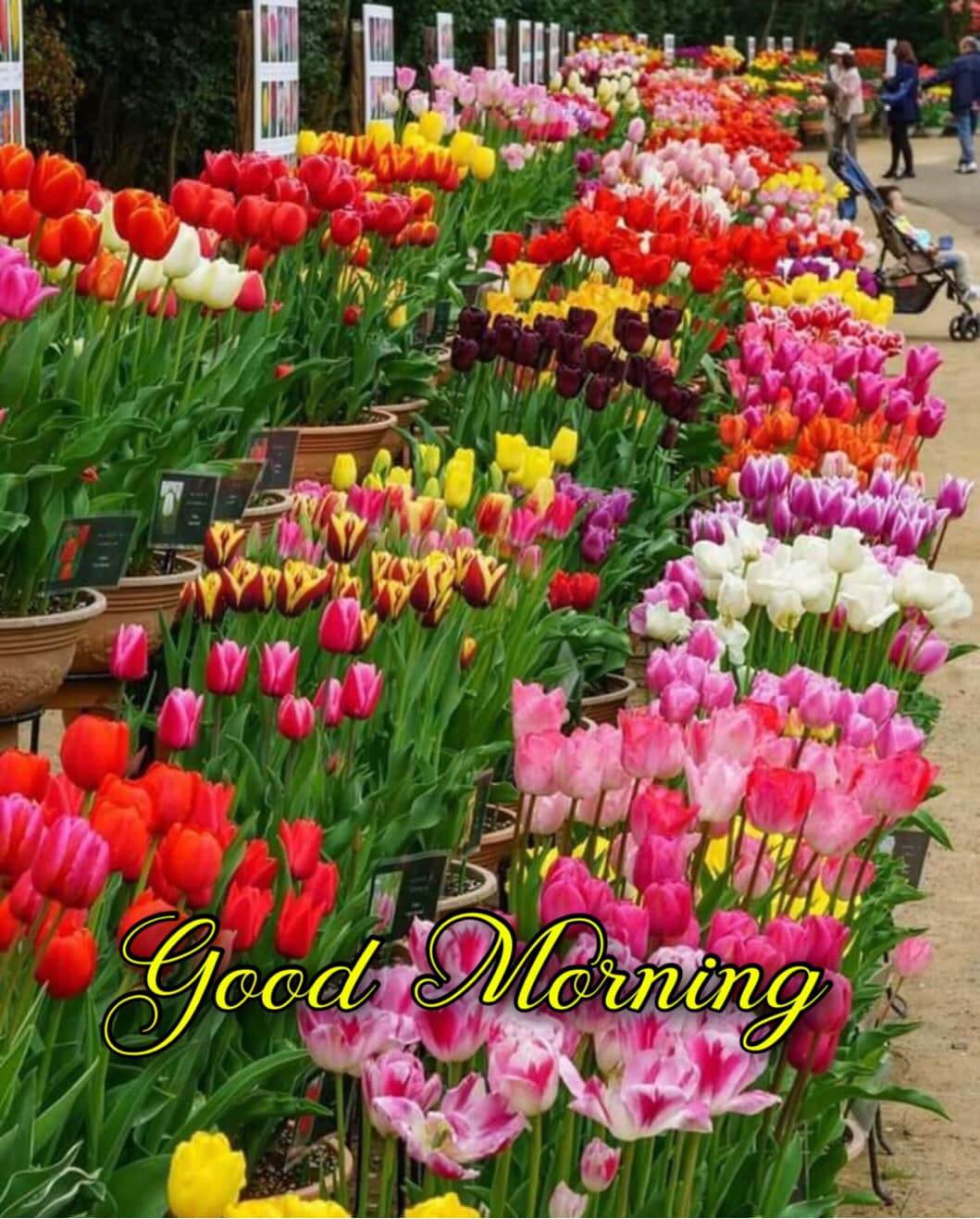 It is going to be a great day to paint and work around the house!

OK, it is 5:30 AM, and I jumped out of bed to do some work early because it was supposed to be 92 degrees today.  I checked the weather with Miss Alexa, and she told me it would be significantly colder than yesterday, a mere 82 degrees. OMG, did I leave the air conditioning on all night?

Time for coffee so I went into the kitchen, turn the Keurig’s ignition switch to the “on” position, and pulled the starting rope twice.  All of a sudden, the engine sputtered to life, released a minor amount of smoke, coughed a couple of times, and then settled in running at about 2 CPH (cups per hour).  I was in business!

While in the kitchen, I selected tomorrow’s dinner.  It is going to be a tiny portion of “One-Pot Beef & Black Bean Chili”.  I was invited to dinner tonight with Holly & Bill!  They are doing steak, and I could not pass up such a fantastic invite with such great friends. 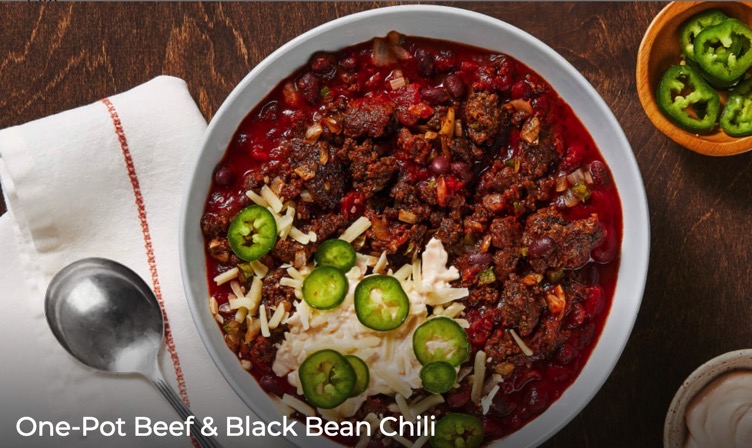 I want to make the chili to get the beef cooked so I can freeze it. Sunday night dinner will be fun!

I am a bit worried because last night when I visited Bill and Holly, it was dark.  They thought I was an Amazon delivery man since I was sporting a cardboard box with a surprise, and I was driving a van.

Tonight they will see me with “the beard” and my partially grown-out head of hair (yes, hair).  Now I will worry all day whether or not I should dye the beard red or go au natural. I could get shot!  I guess I might consider carrying a white flag and wave it wildly around and NOT wear my mask!

I heard Keurig’s motor still running, so it is time to generate another cup of coffee!  Oh, BTW, I was 200.3 pounds this morning!  Today I shall be extra careful because it would be wonderful to wake up under 200 pounds!

My security system, all of a sudden, went off?  Uh oh, am I being burgled? Could it be a pair of 21-year-old blonds?  I looked at the iPhone (which shows the offending security camera), and I saw reflections from the pool!  Perhaps it was a minor earth-quake? 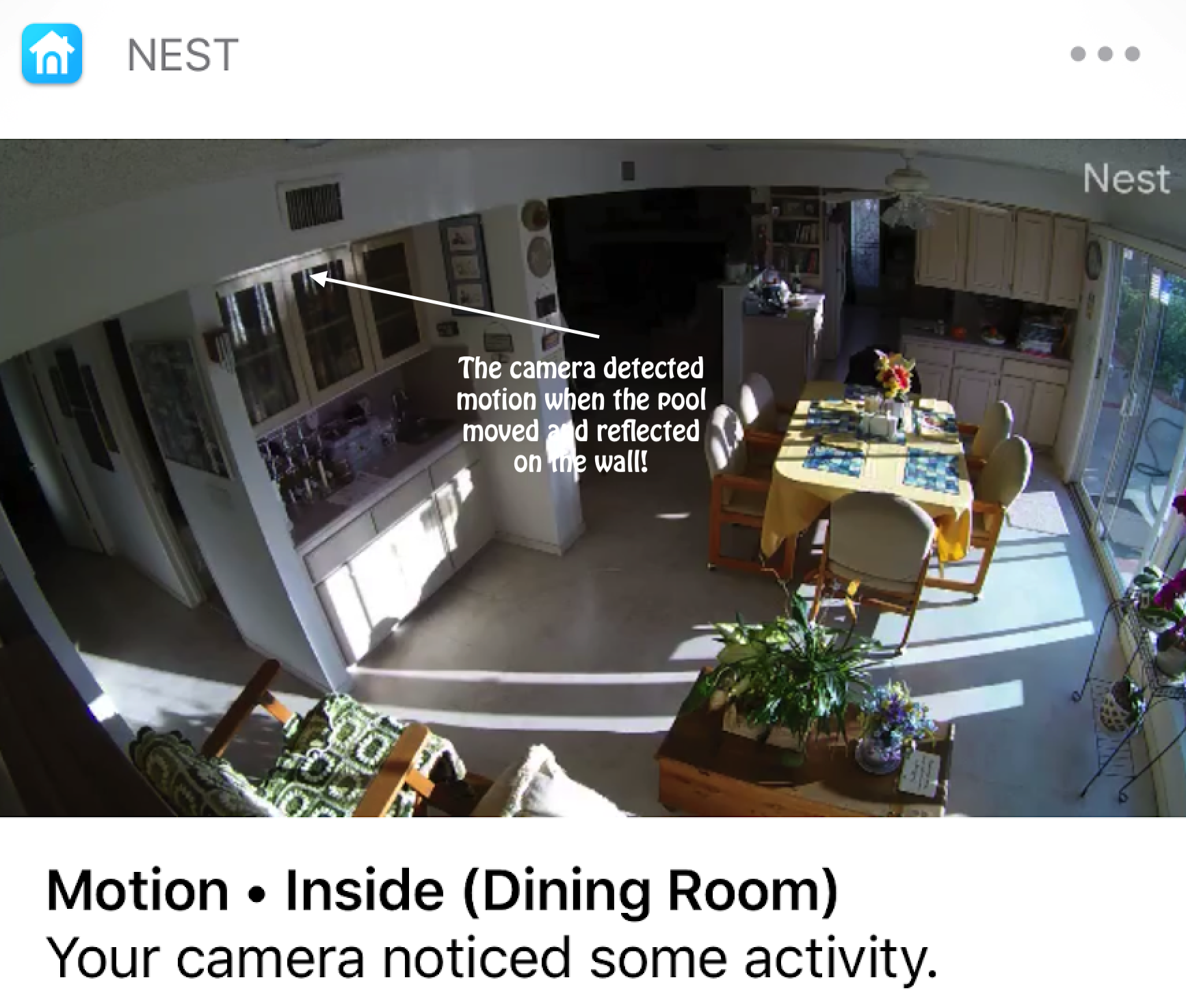 I tippy-toed into the dining area and saw the bright reflections high on the wall!

What could it be that would cause these reflections?  I faced the source of the mystery, and it was Mr & Mrs. Duck swimming in the pool again! They would sit on the side of the pool for a while, then jump in a swim around and then repeat the process.  They visited for several hours! 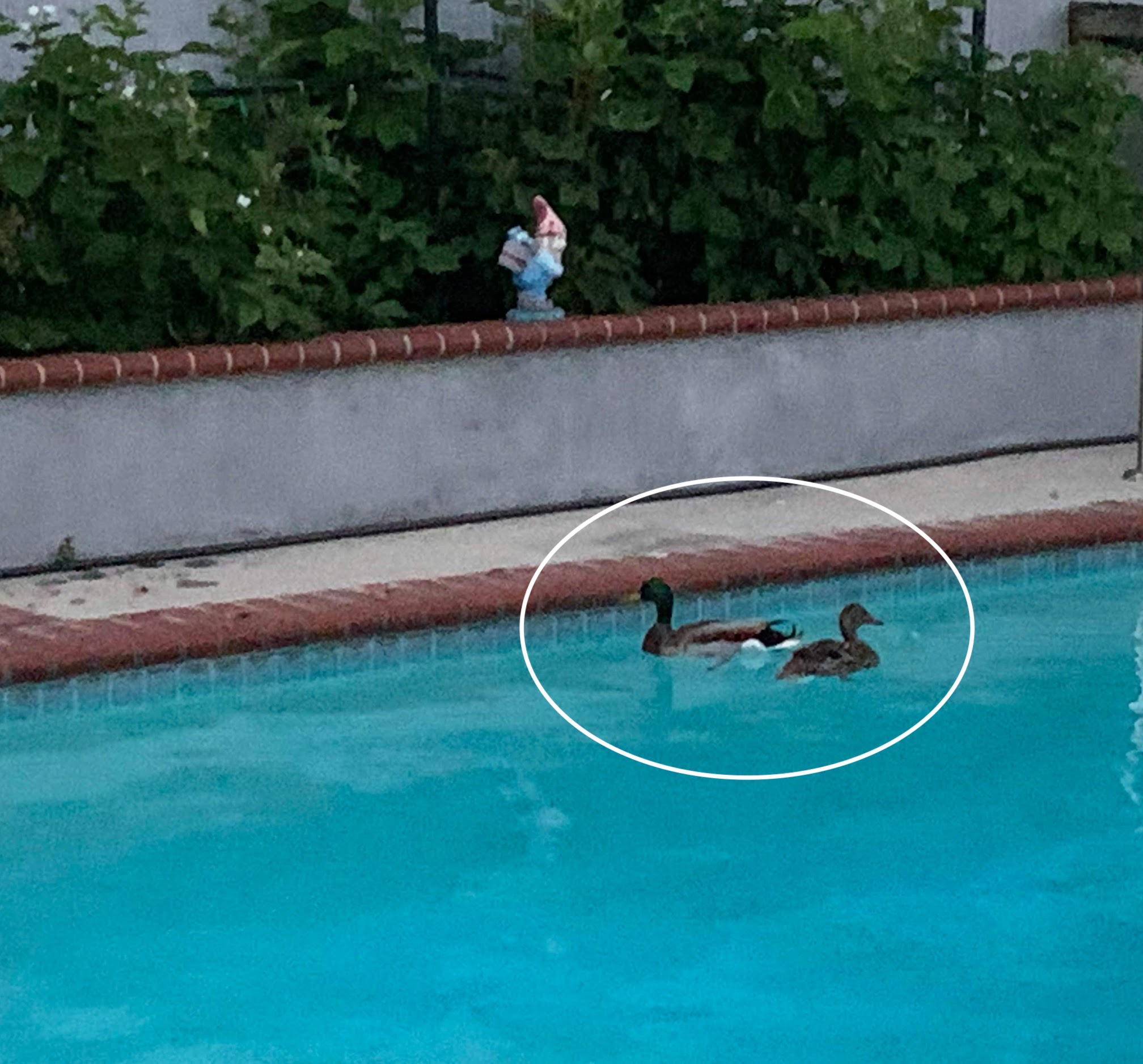 Today I think they called for Room Service!

It’s still a little early, and I needed some supplies before Carri shows up at 9:30 AM, so I did a “hardware store run” to Home Depot.  When I arrived, there was a long line to get in, so I headed to Lowe’s in Long Beach Town Center. No line! 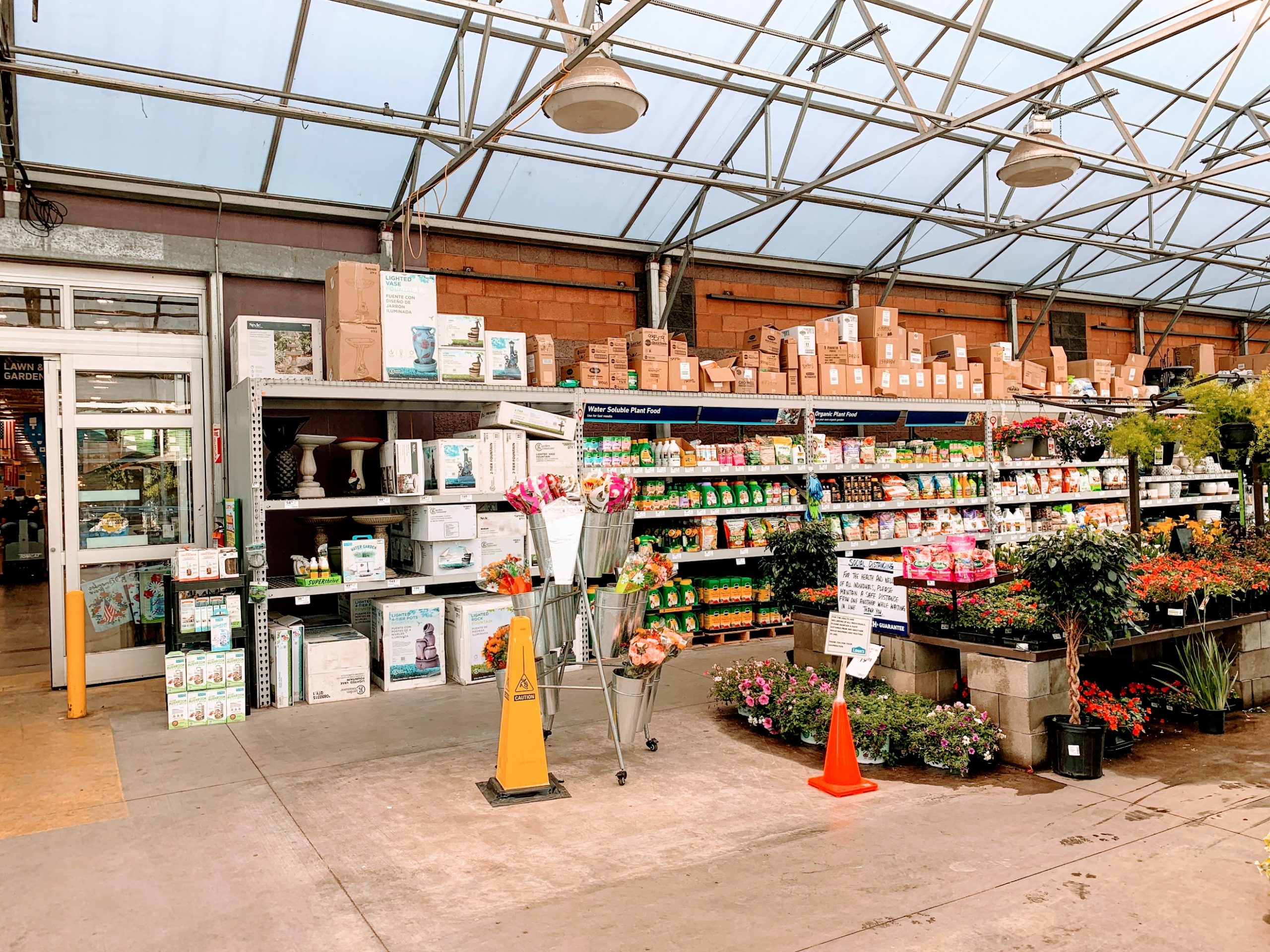 So many decisions!  I was in and out in a just a few minutes!

I got citrus food for the eight trees I have plus some other goodies.  I was back home by 9:15 AM just in time to move the painting supplies to the front yard.  Carri was right on time and jumped into the painting activity immediately.  The new paint really looks beautiful, and sometime this week, I plan to TSP the red bricks and then use a sealer on the bricks and grout.  I think I must be getting ready for summer.

The front yard is an escape as it is walled in, pretty quiet, and is adjacent to the front door, so walking in and out to get my Odessey-1908 refills is no big deal! 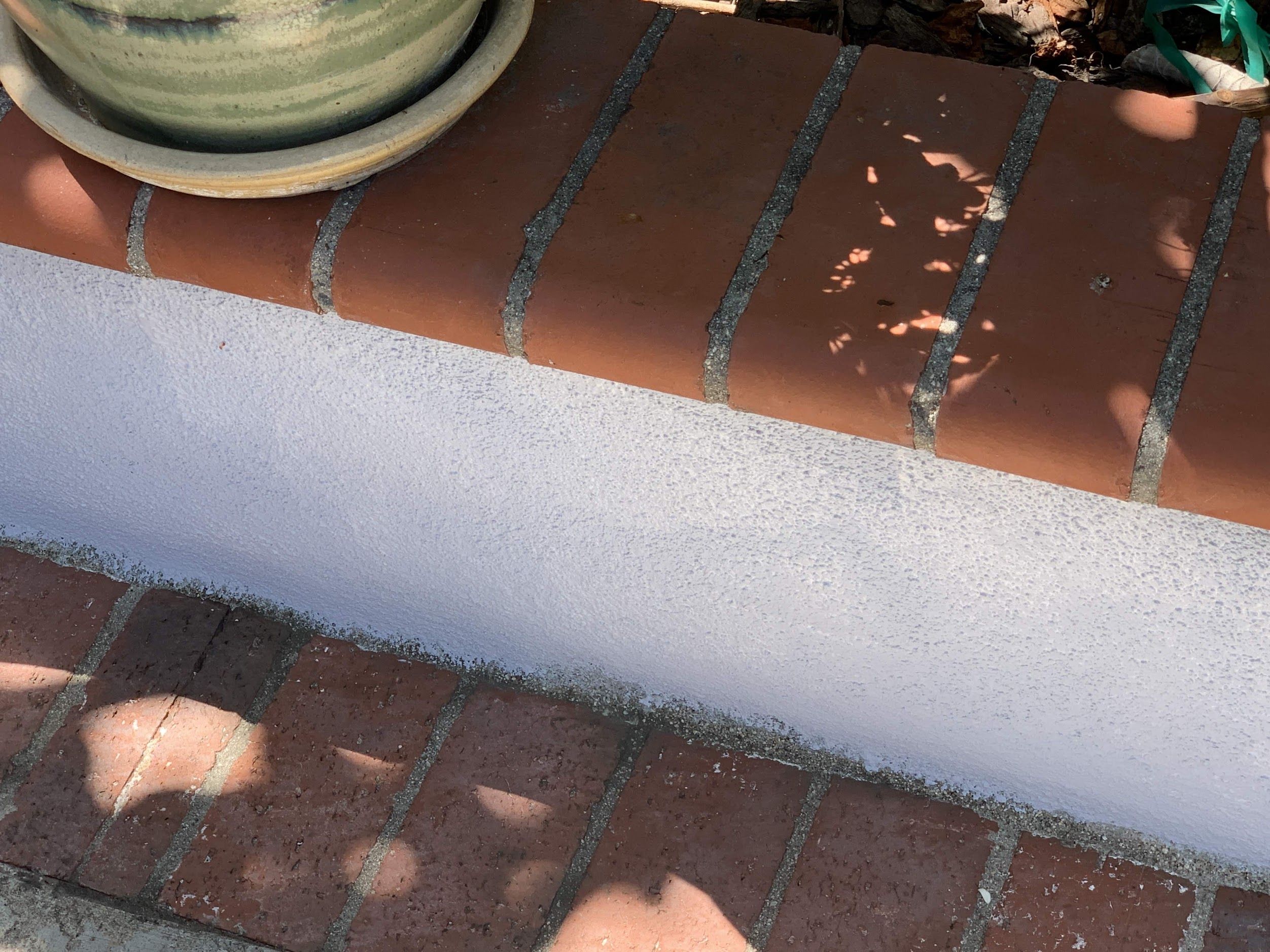 By 9:30 AM, the paint was flying everywhere!

After the painting was done, Carri assisted me in fertilizing the citrus trees by digging around the drip line and putting in the Kellogg’s citrus food at the dripline.  A tree drip line is an area defined by the outermost circumference of a tree canopy where water drips from and onto the ground.  We also keep the fertilized twelve inches away from the base of the tree.

Frankly, I have never read the directions before, so today, I decided to do as the package directed. The trees typically took sixteen cups of fertilizer around the drip line, which I thought was a lot. The phosphorus requirements of citrus trees are low so that a good citrus fertilizer will have nitrogen- and potassium-heavy N-P-K ratio such as 13-7-13.

We watered the trees thoroughly before putting the mulch back over the top of the ground.  Now I expect fruit to start popping out within 24 hours, which may be a little unrealistic.

By 1:30 PM, most everything Carri could help me with has been accomplished, so she departed and will probably feel her sore back sometime Sunday.

I watched a little TV before hitting the showers.  Then it struck me; I am going out socially for the first time alone.  It was a weird feeling, so I was glad to be going to good friends who would understand should I become uncomfortable.  Well, with Holly and Bill, I was too busy laughing to get sad, plus their memories of Sue made me feel special as I again was reminded what a special lady she was!

Amazing, just before hitting the shower, I took a chance and popped on the scale. I checked it twice, and I did it, below 200 pounds.  Now I recognize this was probably due to working hard in the sun, but that means it is within reach!  Then I stopped dead in my tracks; will my “dress clothes” fit? Something else to worry about. 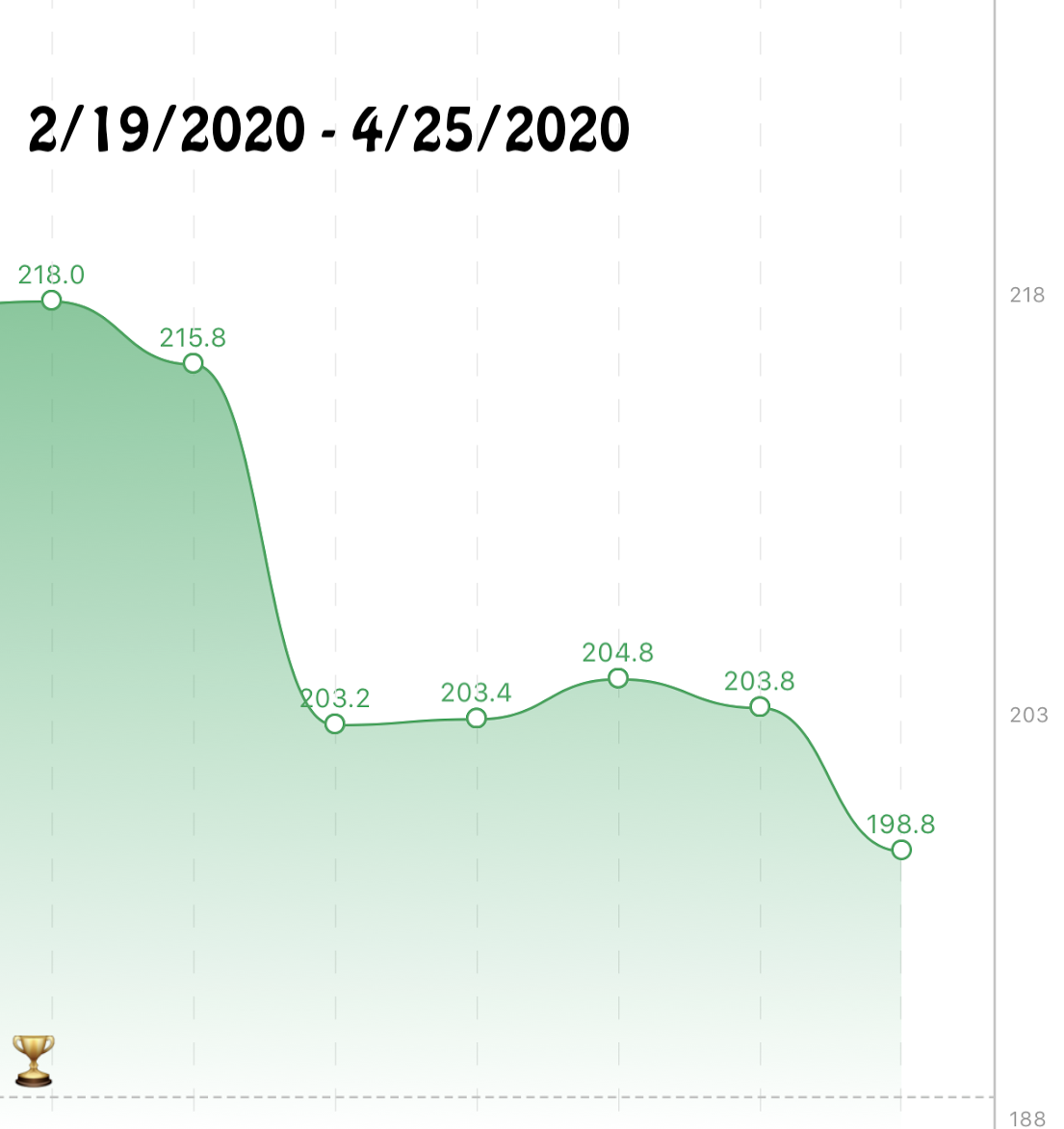 Nineteen pounds of the magnificent body gone That’s almost 10%. The goal is 190 by the end of June!

OK, I am on my way, and it was the first time I had been out of jeans and sweatshirts in two months.  Without Sue, I had to be careful in selecting my clothes, and I even walked outside with a mirror to make sure my pants were indeed navy in color to match my shirt.  What is that funny feeling on my feet?  I remembered it was the first time I had hard leather shoes on.  This is truly an adventure.  I asked Holly to check me, and I got her approval! 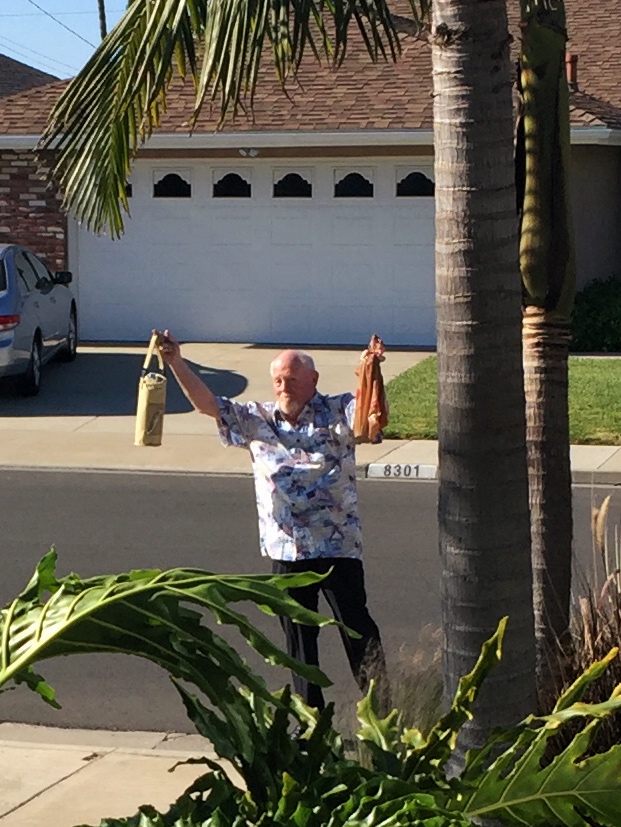 I come in peace with gifts!

Upon arriving and we all had the requisite cocktail! Empress 1908 to the rescue for Holly and I. Released in the US in the summer of 2017, Empress Gin achieves its indigo blue color with the infusion of butterfly pea blossom. 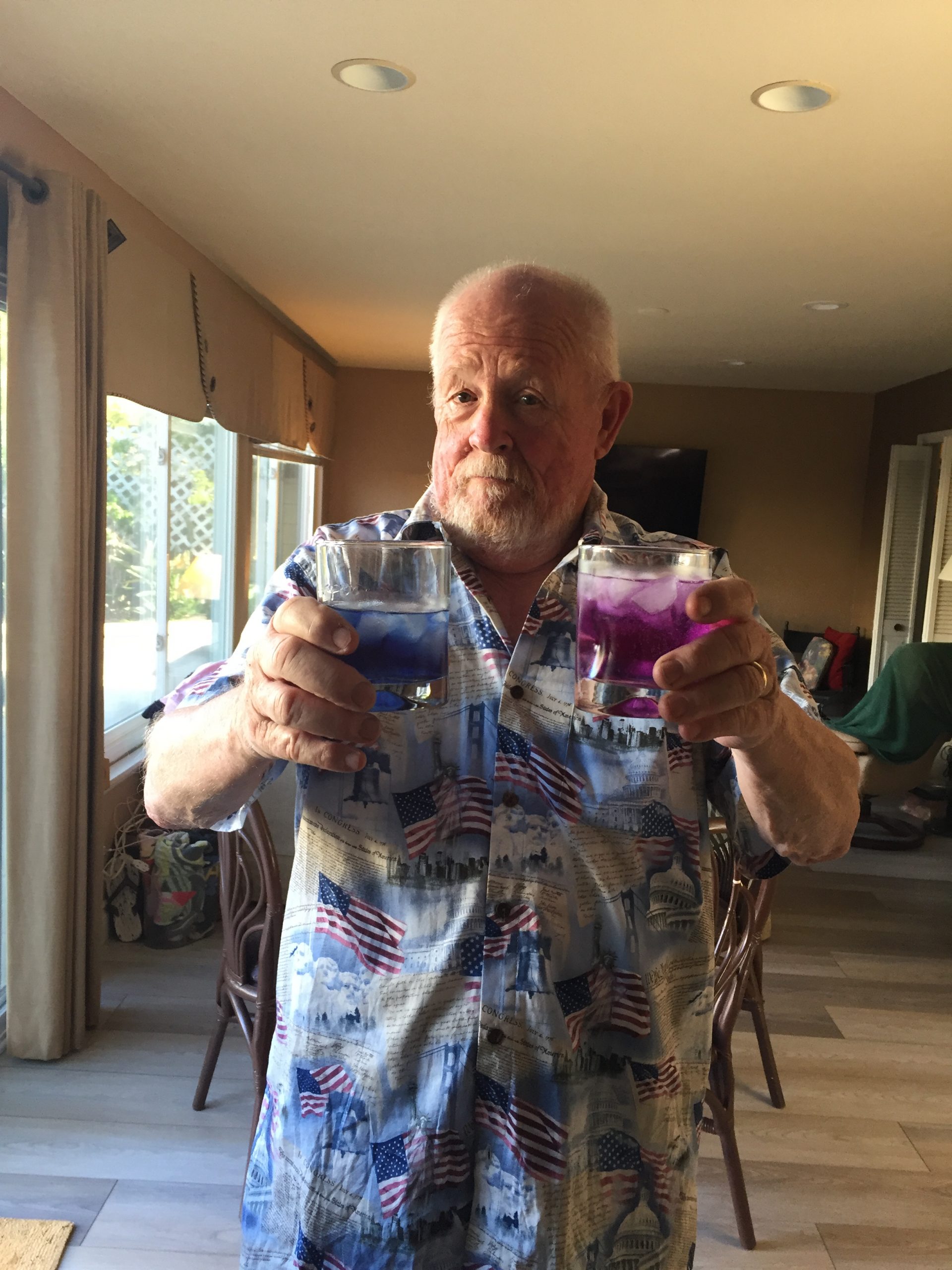 It wins then cocktail of the evening just by color alone!

The pH of this blossom is such that the addition of citrus or tonic will change the color of the gin from indigo blue to light pink. 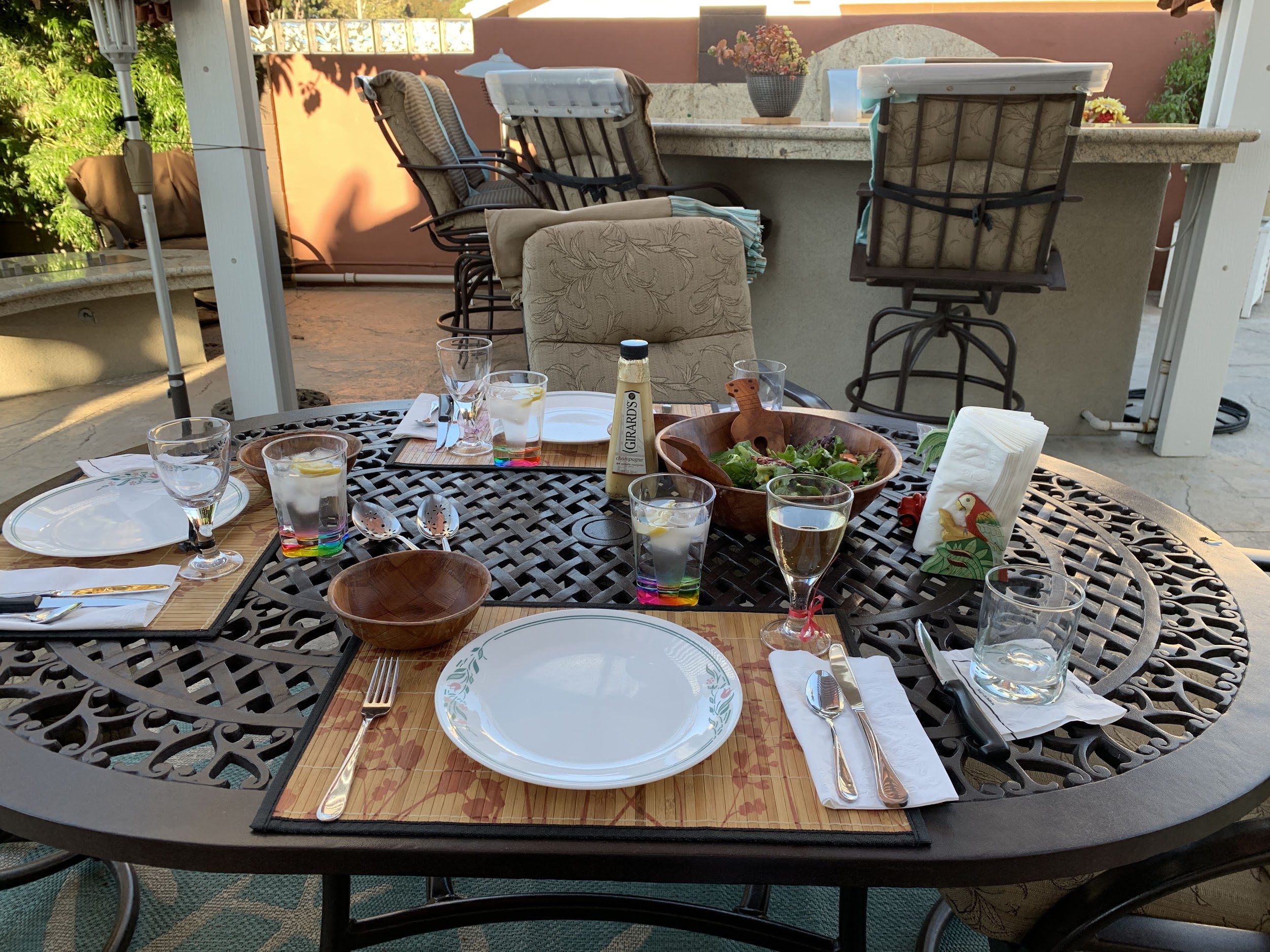 A table set for a king!

Bill sliced the steak like a master chef tossing the knives into the air (and then running like mad in the opposite direction).  He made it through the slicing without the loss of life or limb. Notice Holly has a steel baking tray for protection if needed (it also doubled as a broccoli cooking device). 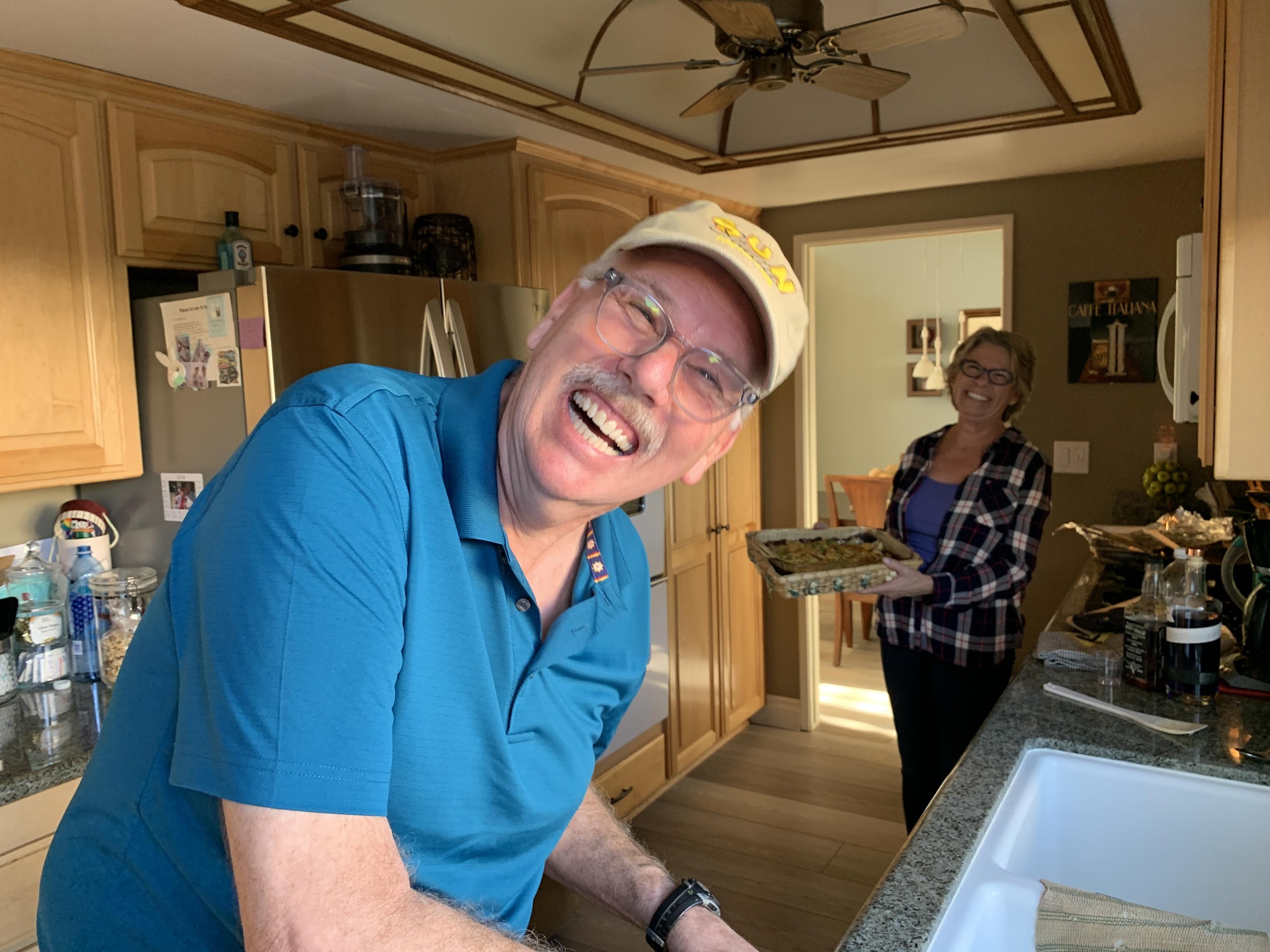 Dinner is served, and the “revelations” began in earnest.  It was a delicious meal punctuated with giggles and memories and all sorts of hilarity. 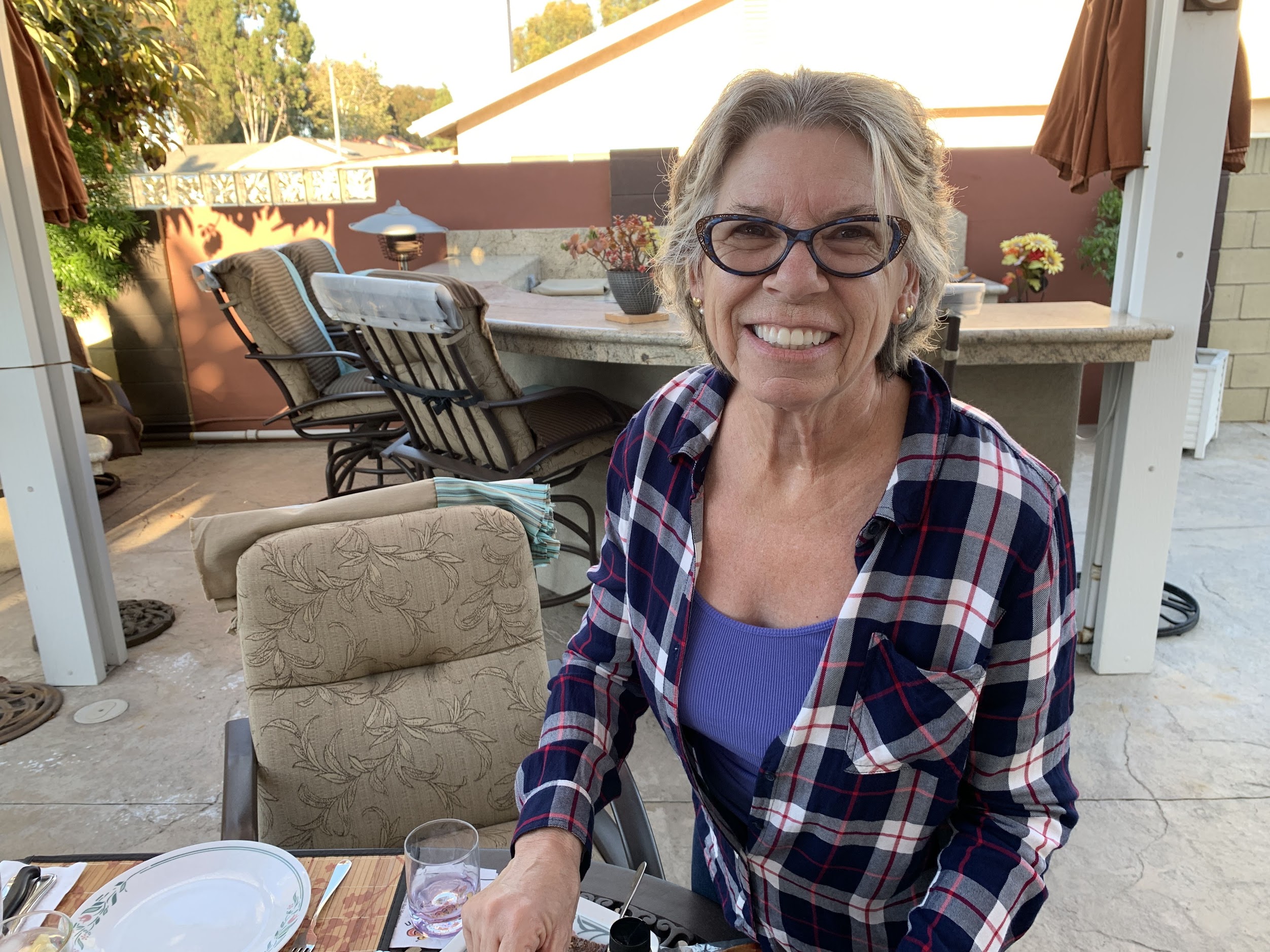 Such gracious hosts, I felt right at home!

By the time we were done, it was dark, which I am sure was much easier on their eyes than sitting across from, what looked like, an escapee from an old Planet of the Apes movie! 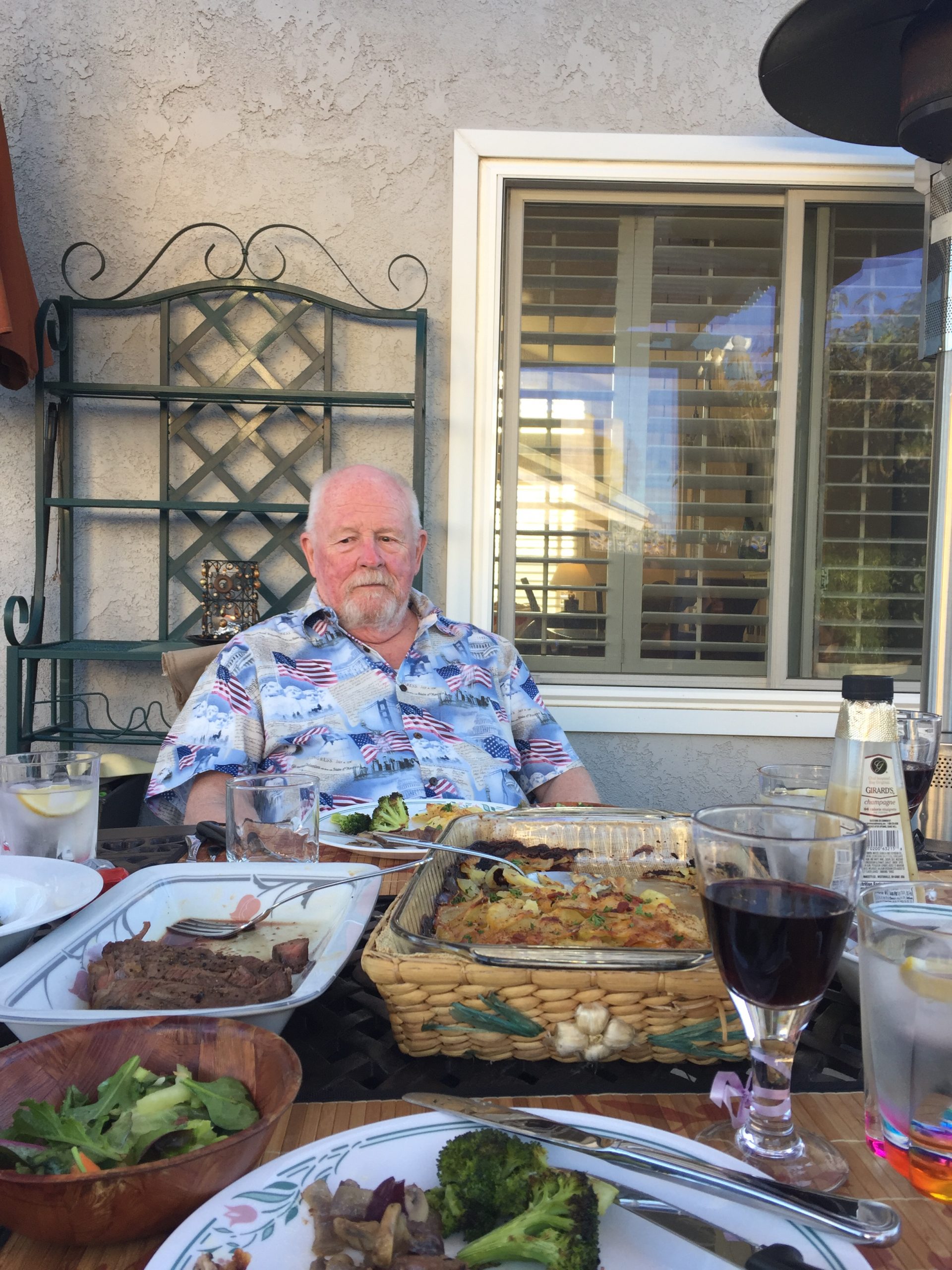 Thank you, Holly and Bill, for making my first social outing easy on me!  You are wonderful folks! I am indeed blessed!

OK, to the Grey Ghost and off to home, which is, according to GPS, a mere 14 miles away.  Most of the distance was on the 405 freeway, which this evening was like the Indy-500!  I was doing 75, and people were passing me on both sides like I was standing still.

I put the Grey Ghost in the garage, and he was still a little frightened by the 405 Raceway!

Just before I left for dinner, Lee had called, so I asked if I could call back later, and I did.  We talked for 45 minutes about stuff and the plans to see her on Monday.  Robin and I are looking forward to the visit on our way back from Temecula.

Just an old retired guy trying to finish out my last years on this planet. I lost my best friend and wife in early 2020. I was blessed again by reconnecting with Dr. Mary Côté, a long-time friend. Mary and I got married July 28th, 2021, and are enjoying life together and plan to spend the rest of our lives being a blessing to our friends and family.
View all posts by Paul →
This entry was posted in Food and Wine, Friends, Gardening, Walking. Bookmark the permalink.