“For what is grief but love in disguise?” – Ashley Ormon

Anyplace we went, we went to the tippy top!  Sue drug me to places I would have never thought of going in my wildest dreams. Sue wanted to go high in the sky, so I did. We went to the top of the Canadian Broadcasting  System Tower, Urulu, highest point in Toyoko, Empire State Building, World Trade Center, Q1 Australia, One Raffles Place in Singapore, the Shard in London, Smáratorg 3 in Iceland, First Hawaiian Center in Honolulu, and many more!  Below, Sue drug me, kicking and screaming, onto the OC Fair Ferris Wheel. She was fearless and loved to scare me to death in these rickety building miles in the air.  I do miss her fearlessness! 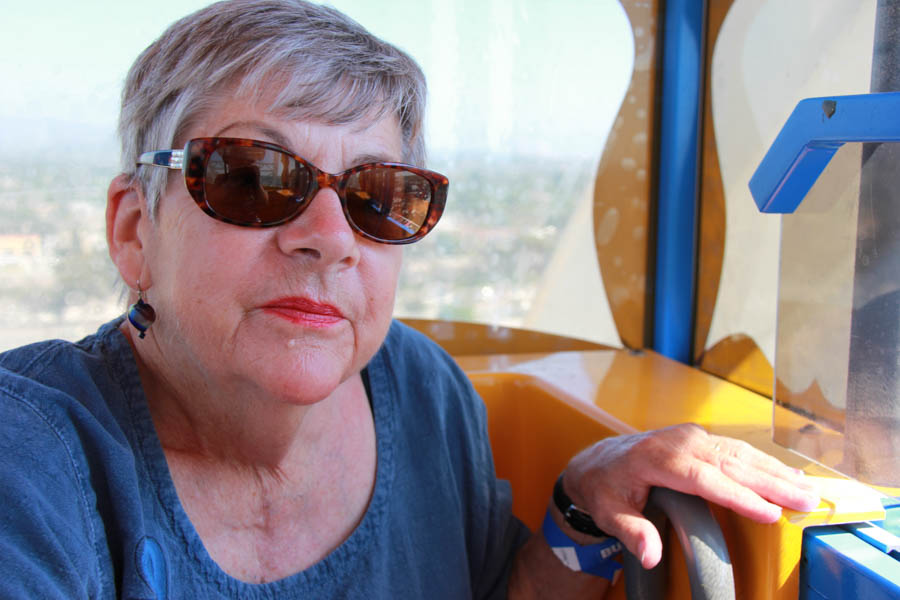 She loved to go to the top of the highest thing around.

I was up and moving by 7:00 AM and talking to my son, Joe, who was walking around the block.  We chatted for a while, and then I took off for the market to pick up some things.

If I had imagined, I would be looking at the weekly throw-away ads from Ralph’s market a year ago; I would have thought myself crazy.  Nope, I am NOT crazy, just a good shopper.  I came home with a bargain ham, Easter it was $45, and today the same ham was $13!  I picked up some spare ribs and have no idea in the world what to do with them. Me and the cookbooks are going to have a great time!

The termite folks showed up at 9:00 AM and worked a couple of hours, getting rid of the little rascals. After they departed, I did some wash, set out a new tablecloth and napkins, and got ready to receive Robin.

Robin came in about 3:00 PM, and we walked almost three miles.  I took some snapshots of the more unusual items we spotted on our journey.  As we departed the house, Vicky wrote a message to the delivery people, a quality message that we thought very lovely! 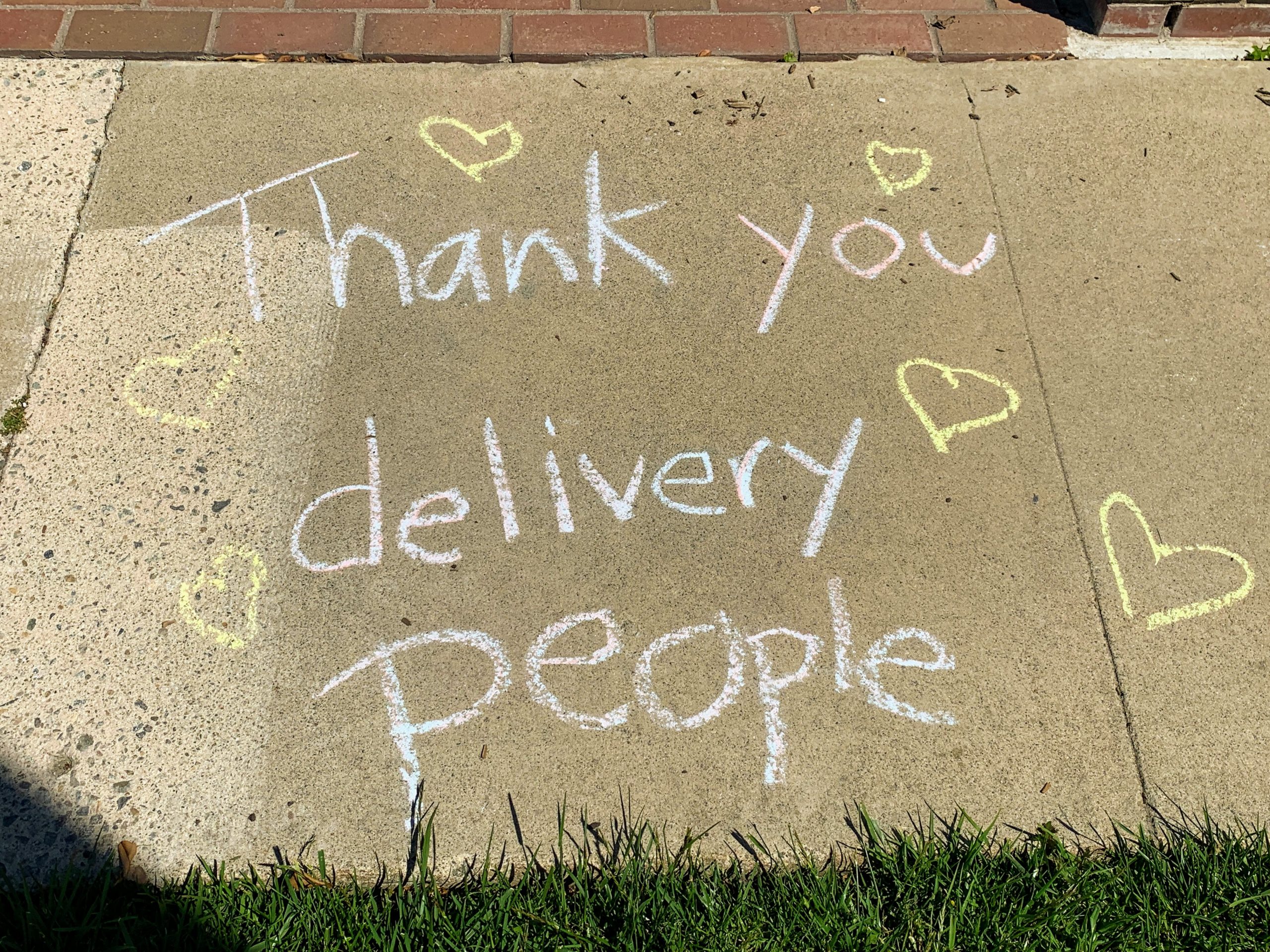 These delivery people keep us well stocked with everything!

OK, we are off and “running” heading north.  We tried to pick up the pace, but we stopped several times.  Once we stopped so, I could play a song for Robin.  She did not believe me when I said, “I loved the old song called ‘Make An Ugly Girl Your Wife’ “.  Thank you, Apple Music, as they had ten versions of it! 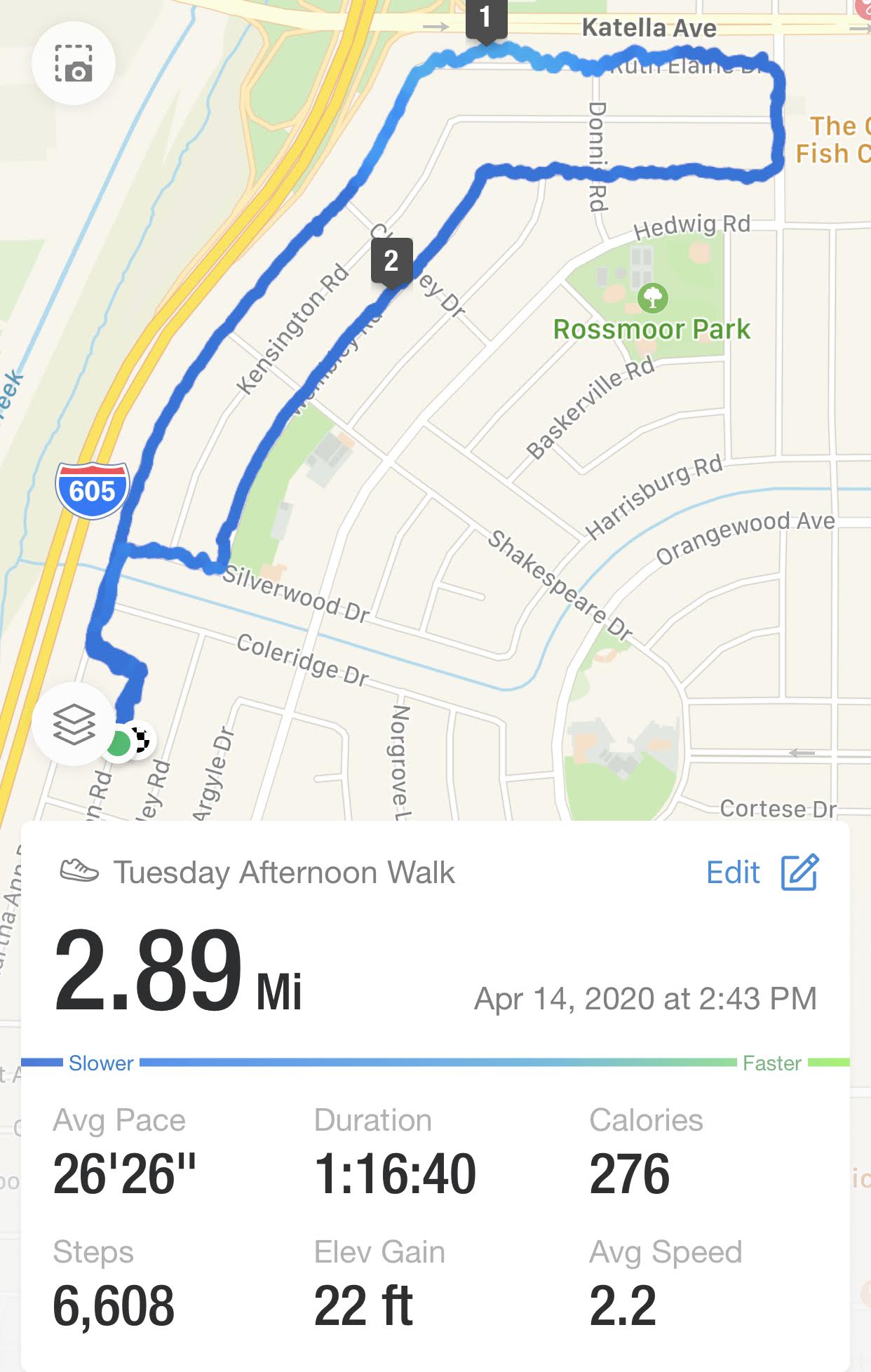 When we walked, we were like 2.7 miles an hour, but we stopped to see the sights, examine the beautiful flowers, and listen to music!

The artistic neighbor had taken down her Easter Bunny, but she put virus masks on all her other animals.  The owl kept his eyes on us as we passed by.  We did not hear him cough! 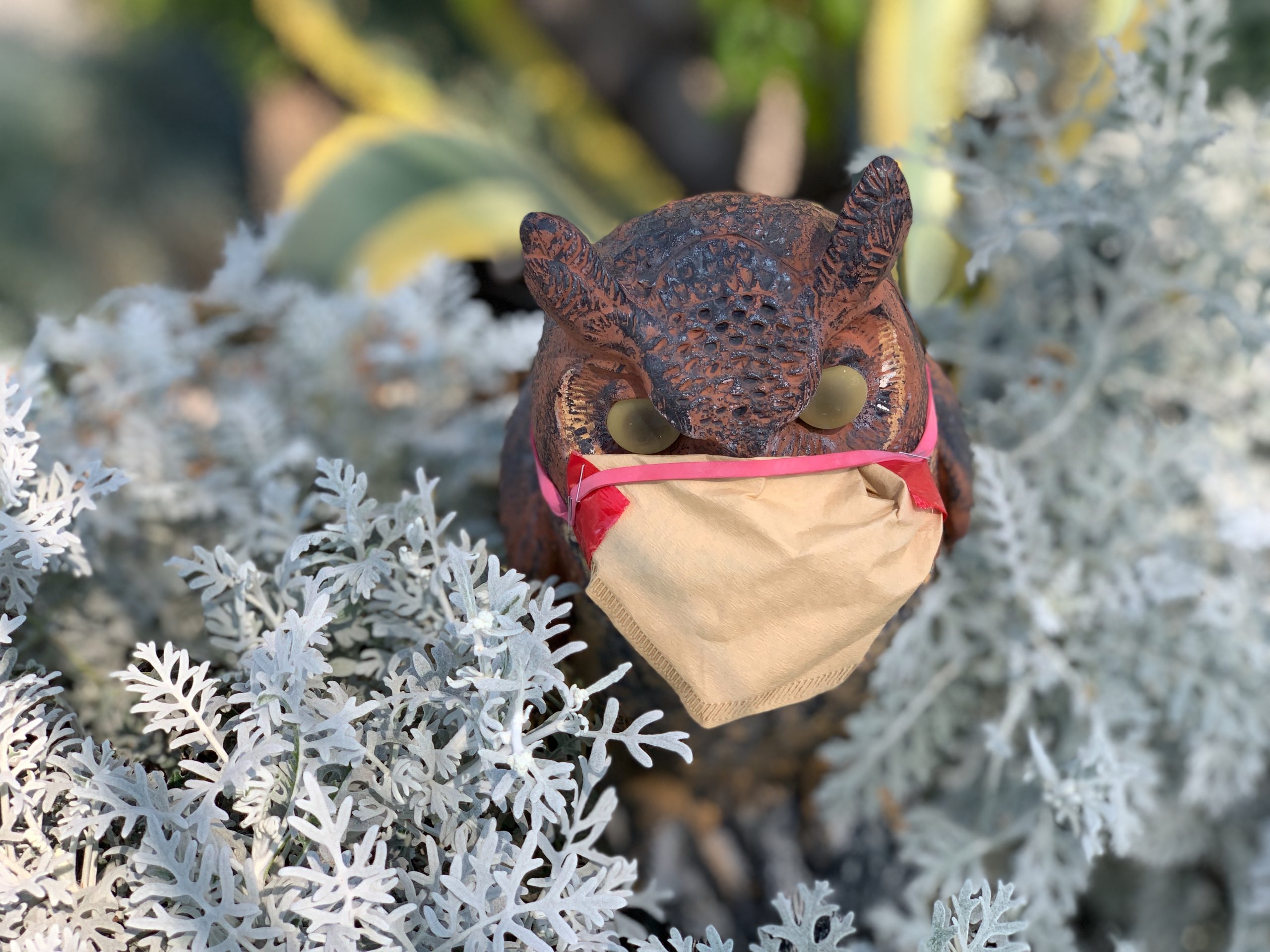 The photo was taken with Focos, a new app that controls the depth-of-field!

These flowers looked plastic; they were so perfect.  We stopped and kneeled to feel them to make sure.  The sun was on them, and they almost looked like they were electrically powered. 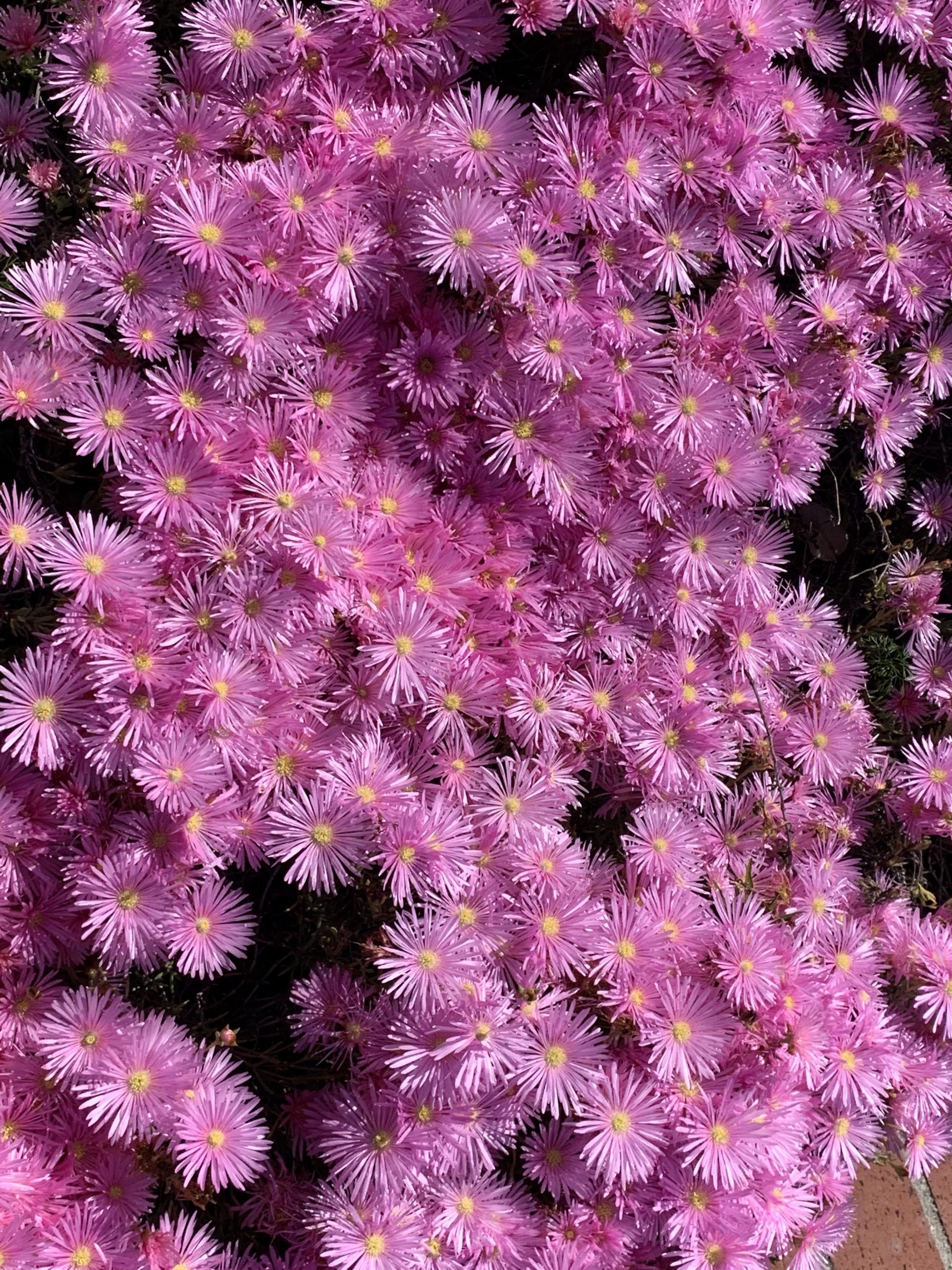 Pretty In Pink; Great name for a movie!

Mother nature is truly astonishing in her beauty.  The colors and shapes must all have a purpose only known to her.  These little guys would have been playing 1940s music out of their blossoms! 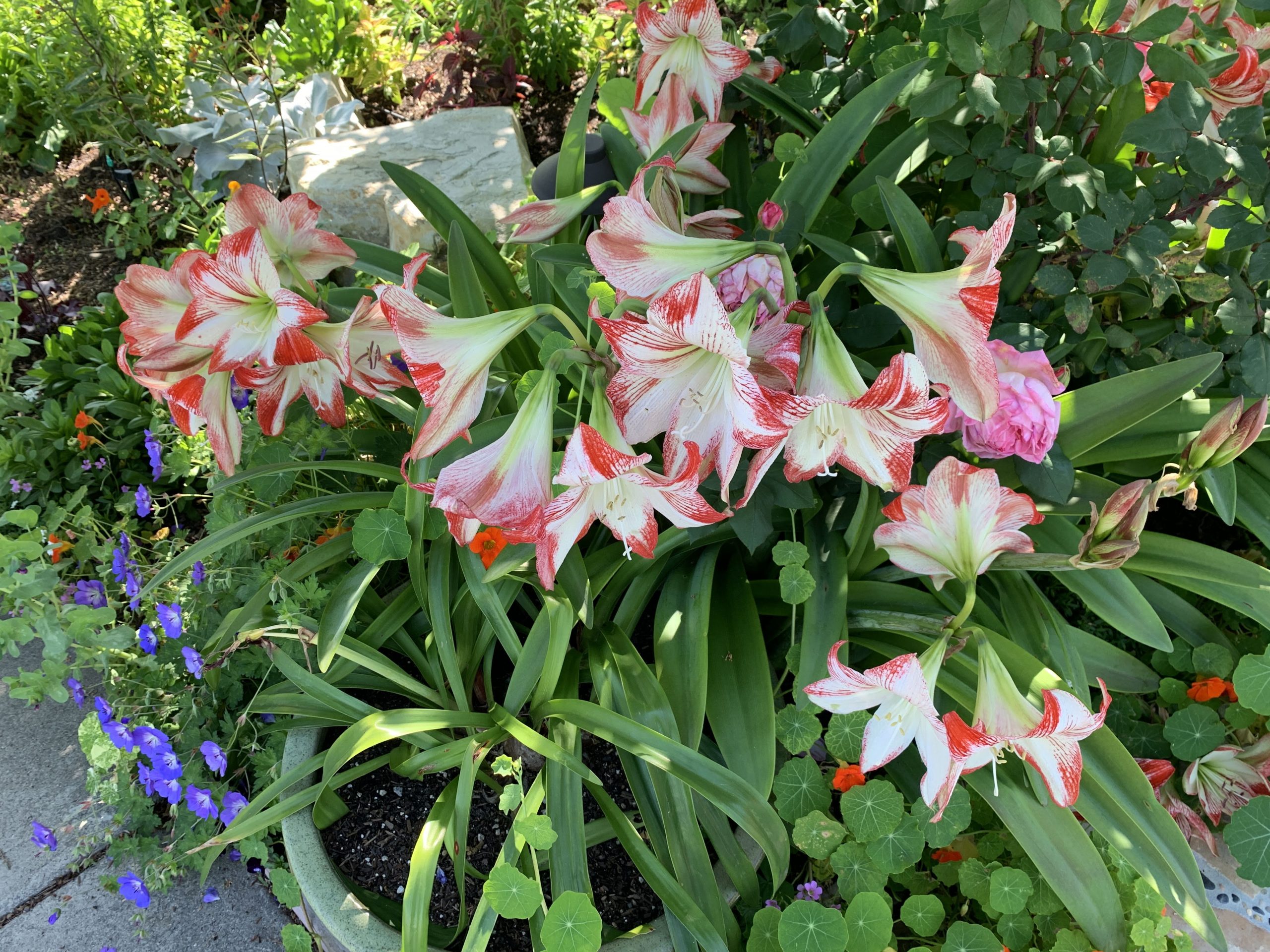 Even the uncomplicated flowers have their strange beauty.  Facing the sun head-on with bees visiting then all-day, they are never lonely. 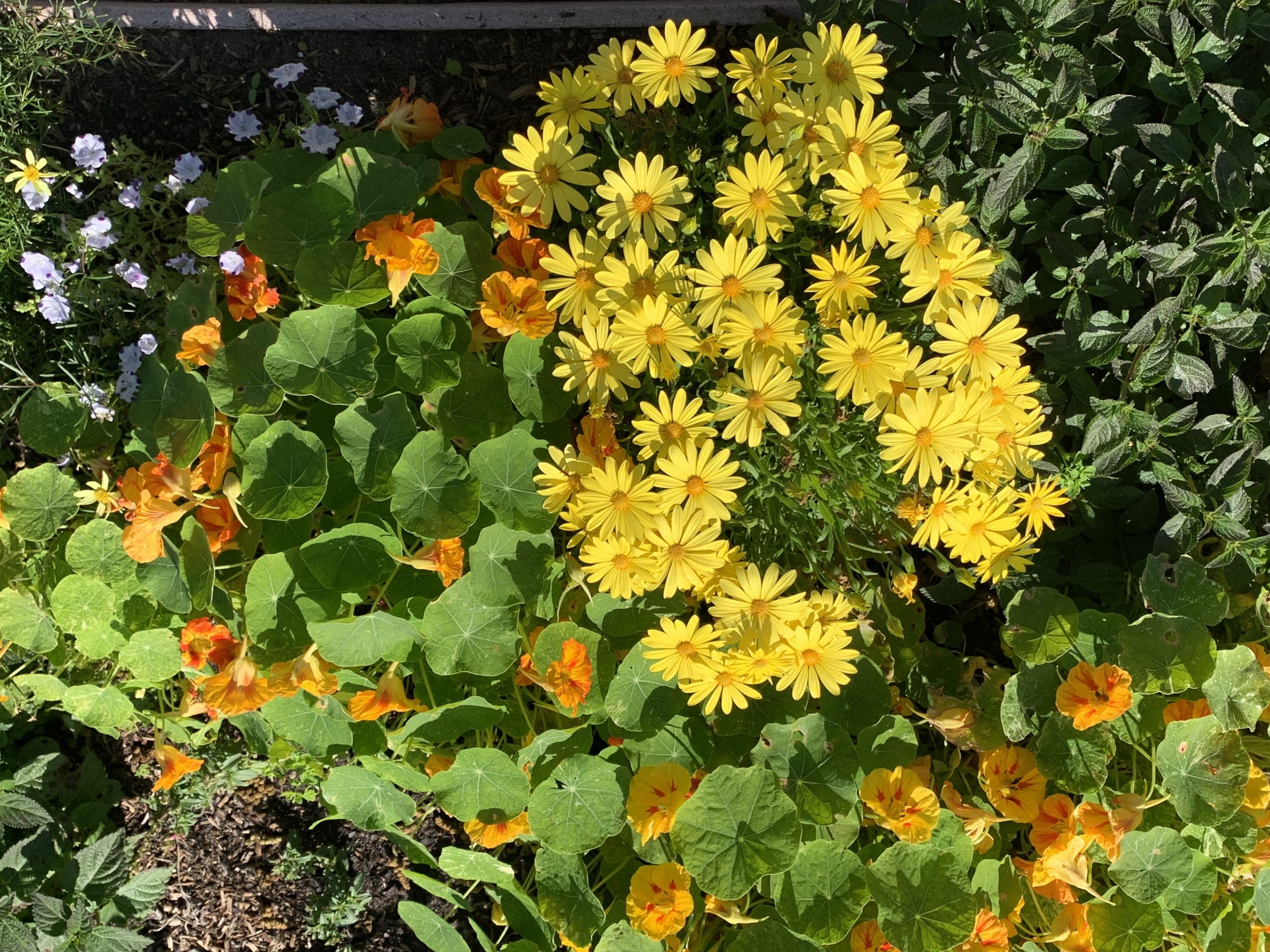 The yellowish of yellows!

By the time we got home, it was “that time” meaning dinner.  I could have whipped up something special, but we decided dinner in the park would be fine.  The playground is cordoned off; thus, the sounds of kidlets screaming were not present.  Peace reigned, so we plopped ourselves on a park table under a large tree and had our feast. 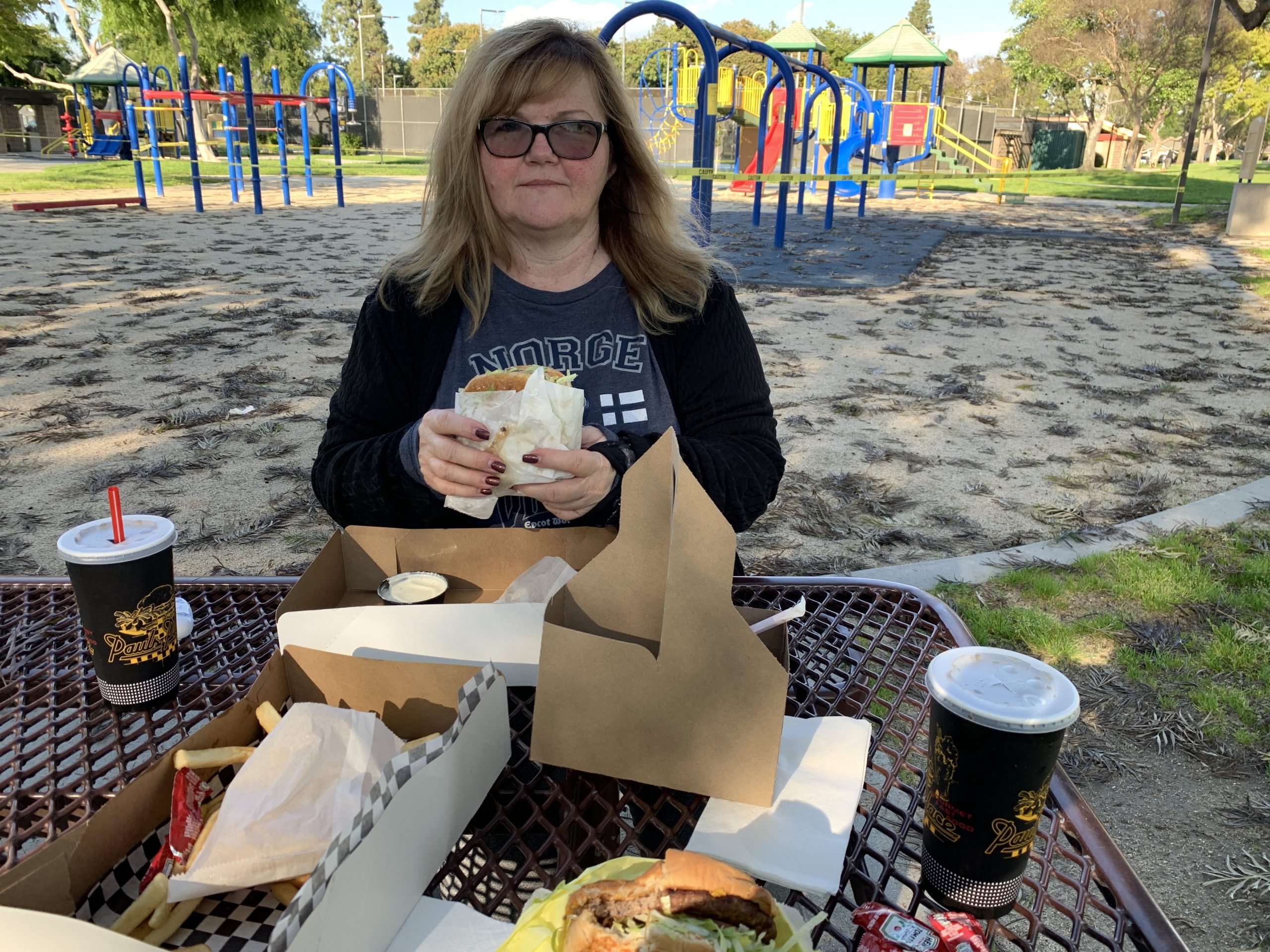 We went to Paul’s Place, the best burgers in town.

There have been many claims about the origin of the hamburger, but it remains unclear. The popular book The Art of Cookery Made Plain and Easy by Hannah Glasse included a recipe in 1758 as “Hamburgh sausage”, which suggested to serve it “roasted with toasted bread under it”. A similar snack was also popular in Hamburg by the name “Rundstück warm” (“bread roll warm”) in 1869 or earlier, and supposedly eaten by many emigrants on their way to America, but may have contained roasted beefsteak rather than Frikadeller. Hamburg steak was reported to have been served between two pieces of bread on the Hamburg America Line, which began operations in 1847. Each of these may mark the invention of the Hamburger, and explain the name.

As you can see, I also partook of this elaborate feast, slathering my fries with ketchup as they slide effortlessly into the deepest part of my teeny-tiny-tummy. 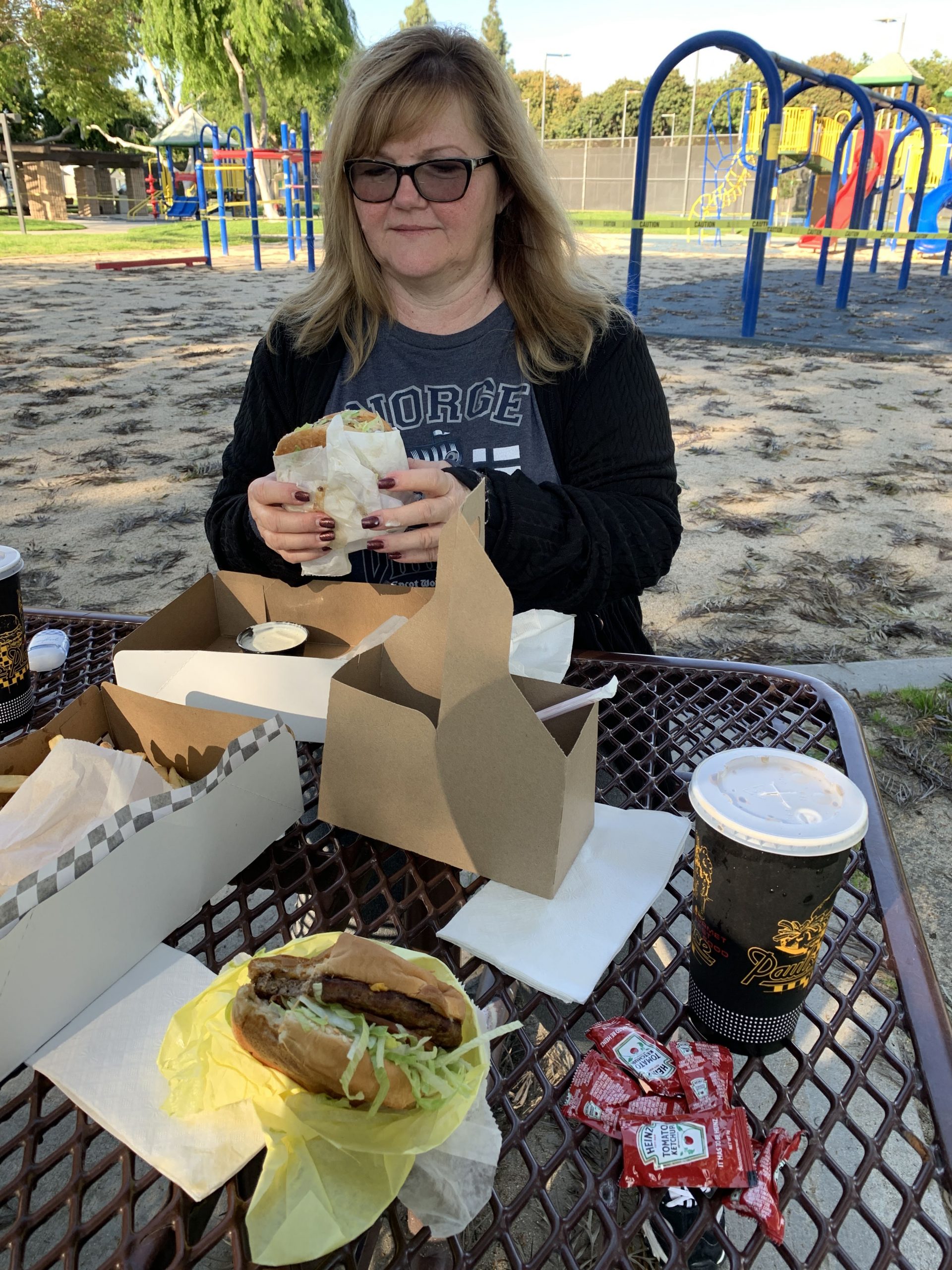 Where are our crystal goblets and silver serving bowls? Next time I guess!

After checking today’s step-count, the burger bing was OK.  Eight hundred calories in burgers and fries (I didn’t eat all of mine) music the 350 calories burned off walking, I was golden!  The scales tomorrow morning will tell! 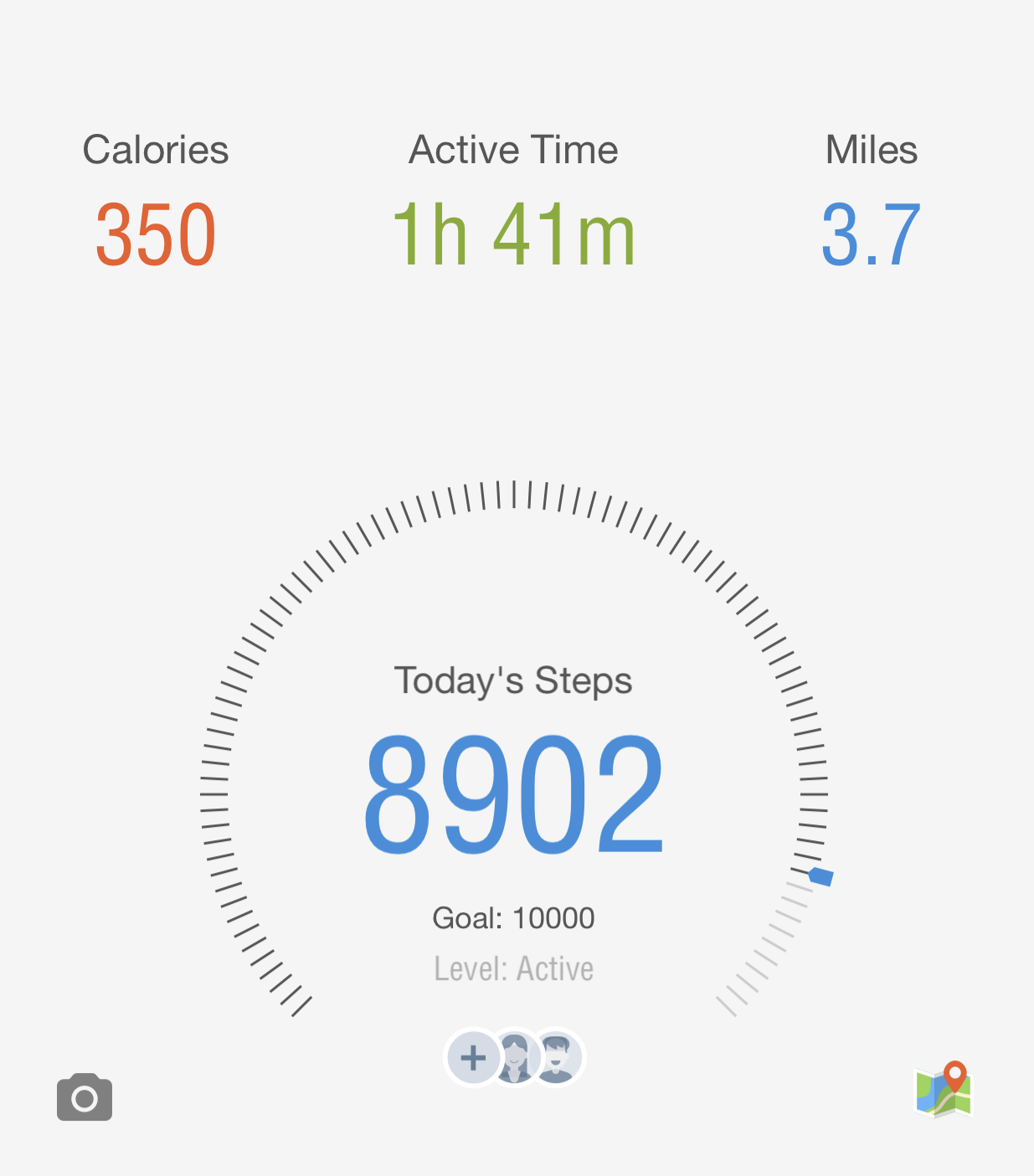 The pedometer keeps me honest!

While at the park, Colleen and Mark called, so we talked for a while.  It was almost freezing in New Hampshire, so I panned the camera around the park, showing them a sight they seldom see, blue skies without clouds!

We returned home, plopped, and discussed the rest of the evening! 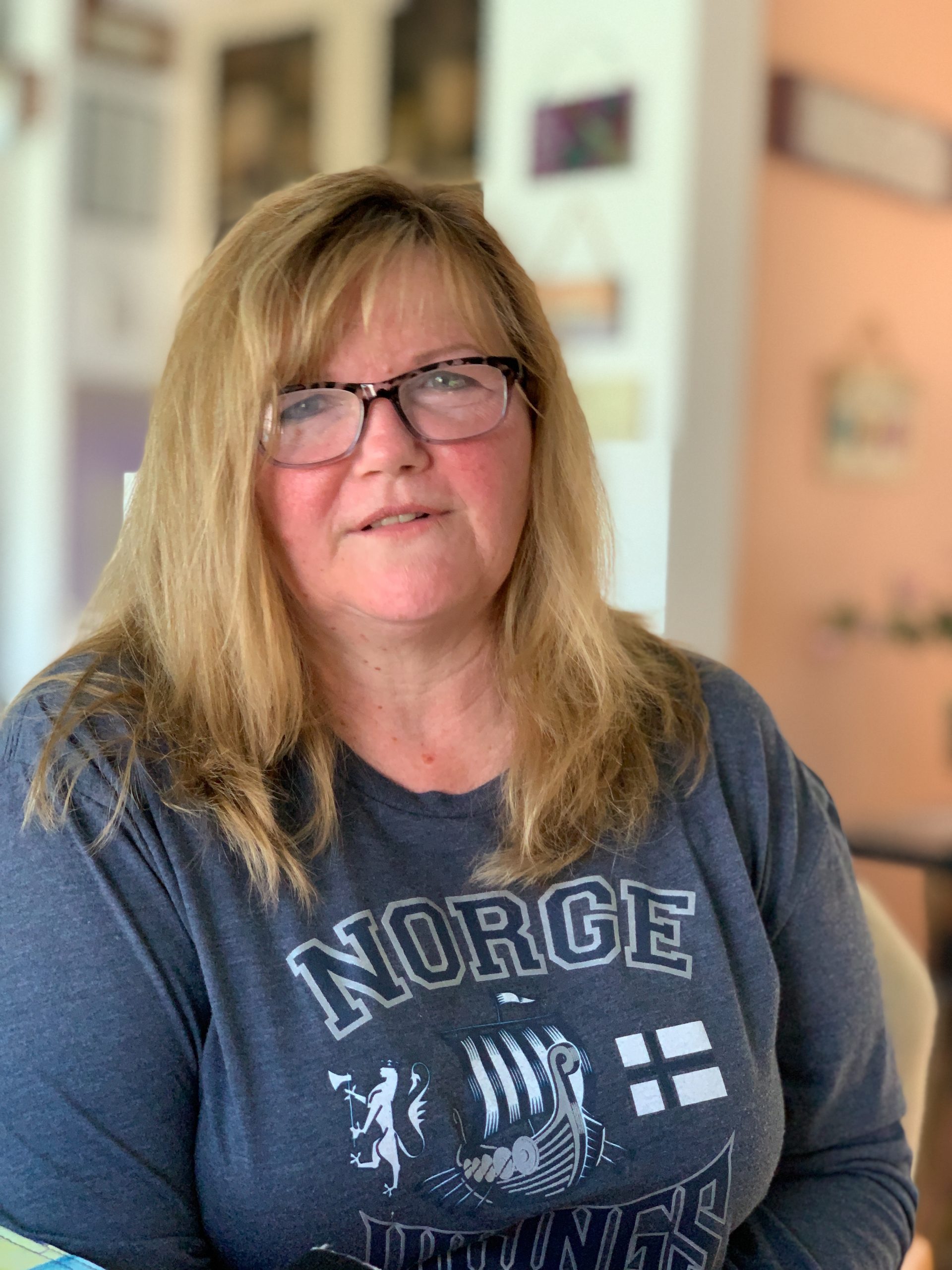 Robin, like Colleen, is fun to talk too as we have a lot in common and we share a deep love for Miss Sue.

We decided TV is the answer.  Robin said, “You have to watch Tombstone,” and I told her, “OK, but you have to watch The Quiet Man”.  For the rest of the evening, we watched movies and emptied a bottle of pre-made margaritas.  That sounds like a lot, but over four hours, we slurped down two drinks each! 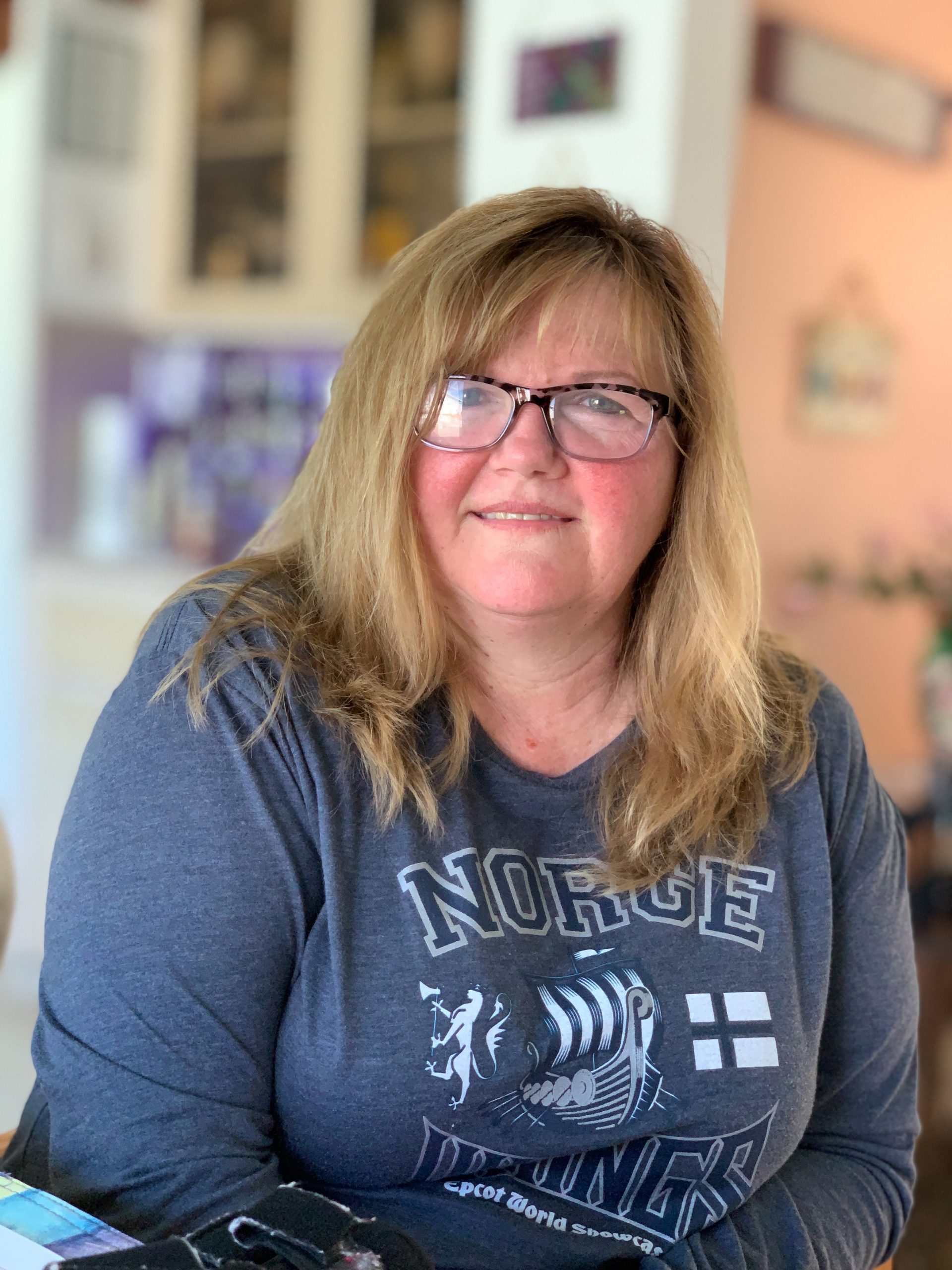 Both movies were great.  I have watched “The Quiet Man” ten times, and I still pick up new things I did not remember.  I loved Sam Elliot as one of the Earp brothers!  Great movies.

We crashed just shy of 11:00 PM.  I cleaned up the kitchen and turned on the radio and was fast asleep within a few minutes!

When we are together, we discuss a lot about memories of Sue.  Of course, Robin knew Sue for the last thirty-five years, and we had wonderful times together.  Here we are at our Monday evening hangout, Malarkey’s, with dear Irene. 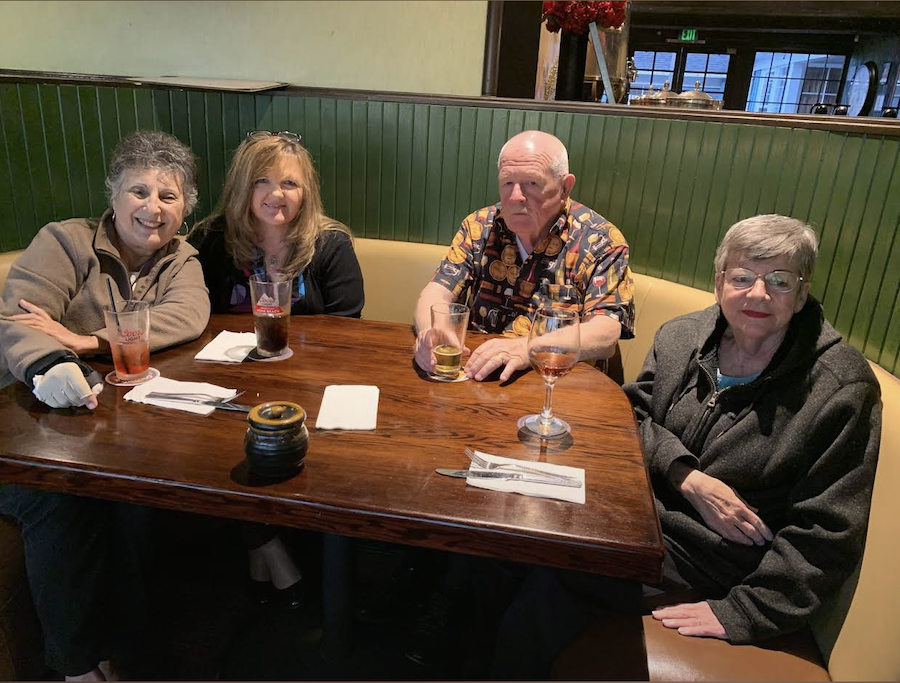 Just an old retired guy trying to finish out my last years on this planet. I lost my best friend and wife in early 2020. I was blessed again by reconnecting with Dr. Mary Côté, a long-time friend. Mary and I got married July 28th, 2021, and are enjoying life together and plan to spend the rest of our lives being a blessing to our friends and family.
View all posts by Paul →
This entry was posted in Dining Out, Family, Walking. Bookmark the permalink.