Consciousness: That annoying time between naps.

So, Paul knows EXACTLY where he was 63 years ago today!  Opening day at Disneyland!  Ralph got six tickets for opening day from Whitman Publishing Company (publisher of Disney books) since the dime stores bought so much from Whitman.  Off we went, not knowing what to expect. Remember, some called this “Walt’s Folly” building a million dollar “entertainment park” in the middle of nowhere!  Little did we know where this was going.

Did You Know? Whitman Publishing is a book publisher that primarily produces coin and stamp collecting books and materials.  The company is owned by Anderson Press.  From the early 1900s to the mid-1970s, Whitman was a popular children’s book publisher. For decades it was a subsidiary of Western Publishing. Its genres included westerns, mysteries, science fiction, adventure stories, and various others. Whitman also published authorized editions of popular television shows, such as Hawaii Five-O, The Roy Rogers Show, Lassie, and book adaptations of many Walt Disney films. One of its most popular mystery series, a Nancy Drew-like series intended for girls, was called the Whitman Authorized Editions.

We took Ralph’s brand new Cadillac convertible, it was a 1954 as I recall. We drove down the “freeway” into Orange County and we had open areas still with orange trees on both sides of the road.  The freeway was not even finished as we got closer to the park. Imagine that, four lanes through Los Angeles all the way to the country!  Disneyland was in the middle of agricultural country!

Disneyland is the only theme park designed and built under the direct supervision of Walt Disney. Construction cost $17 million and took exactly one year to complete. 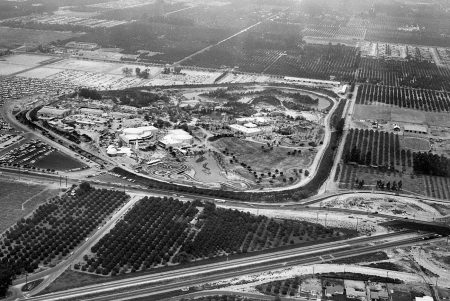 July 17, 1955: Disneyland opening aerial. In foreground is the still-unfinished Santa Ana Freeway. The Harbor Blvd. intersection is on extreme right.

The ride was wonderful… Loved seeing the country in the convertible! 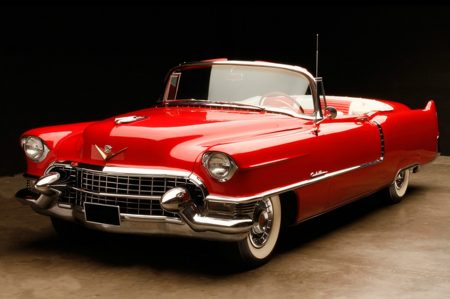 Ralph got a new company car every two years!

We got there and showed our tickets and walked right in…we had REAL tickets.  It was a hot day and the smell of blacktop permeated the air.  Thinking back, all of the trees were recently planted and were quite small.  We had to be careful where we walked as the TV cables were all over the ground…in those days, the TV cameras were NOT wireless, they weighed several hundred pounds and required a 1-2″ cables to follow them around. 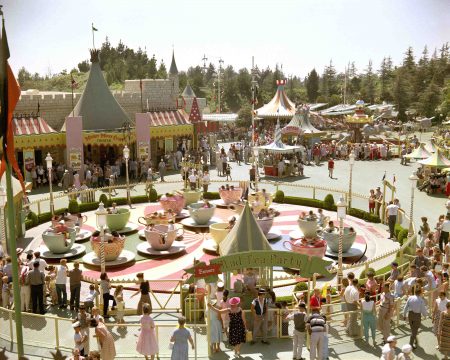 Notice something different from today? 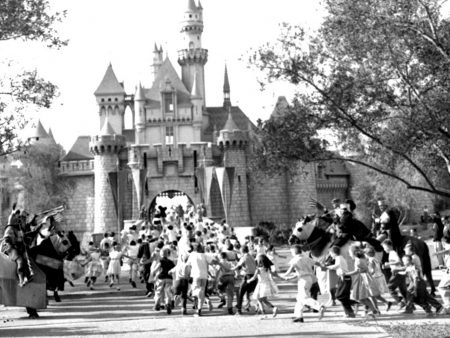 When the castle opened I was in the crowd heading for the draw bridge!

Study the map below (click to make it larger) and see the changes over the past 63 years! Of the 18 attractions that opened, 14 are still running including a favorite, ‘The Mad Tea Party.” 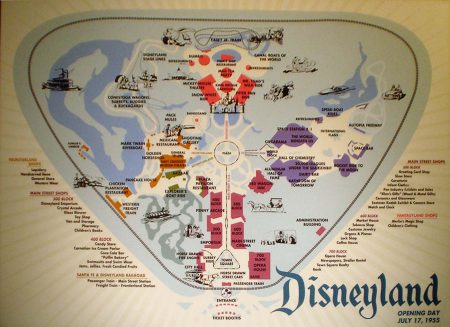 We were all over the place today and bought a lot of cokes as the watering fountains were few and far between due to the plumbers strike.  It was a choice of bathrooms or drinking fountains…they made the right choice! The day was hot and we headed for home about 7:00 PM as I recall…tired and still quite excited  Then it happened!

Random Memories:  It seems we were going right along about 60 MPH on the “freeway” with the top down and we were smelling something burning.  Odd to smell something burning in an open convertible so maybe it was a car near us?  Who knew?

In those days there was no “stop and go” on the freeway, it was just “go”.  It took us about 40 minutes from Disneyland to West Los Angeles.  As we pulled off the freeway and tried to slow down, Ralph noticed the brakes seemed to have “faded”.  In those days, brakes fading meant they would not not stop quickly…like going through water…ah, I date myself!  Disk brakes can go through water and still stop…the old drum brakes would not stop until they dried out.

We made it home but Ralph had to drive very slowly and start applying the brakes well ahead of time at each light/sign in order for the car to stop.  When we pulled into our home (near Ralph’s house) dad examined the car and said the brakes smelled hot.  It was then that we discovered we had driven all the way home with the emergency brakes on.

You may not remember but in the old days, you reached down and pulled up hard on the emergency brake and to release it, you gave the top handle a quarter-turn to lock it…sometimes resulting in an immediate “jerk your arm out of the socket” motion. The new Cadillac had a new-improved system.  The new system required on to step on the emergency brake and there was a simple release activated by your hand.

Needless to say, all the brakes had to be replaced on the brand new Cad!  Ouch! 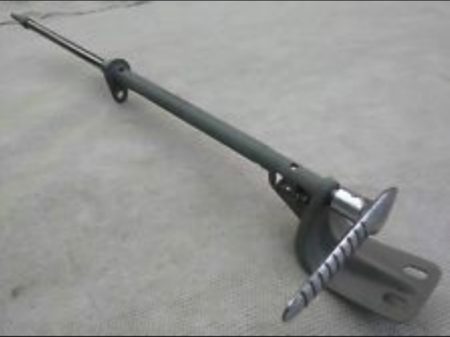 You pulled up hard using the handle and the brakes would lock, to release the brakes, you rotated the handle 90 degrees!

OK, back to reality.  Paul was sick last night waking up at 3:00 AM with a belly-ache.  Didn’t sleep at all but did decide to go to “The Ol’ Guys’ Luncheon” anyway.  We went to Taco Surf in Sunset Beach and had a great time.  There were thirteen of us and the while bill was $133 so we picked up the tab…since we stopped drinking, it made sense.  In the old days we would have five Cadillac margaritas at $15/each so that along would have been $75 plus our meals.  Robin joined us and that made it special.

We returned home, rested for a few minutes and then off to the eye doctor for Sue.  She got a new prescription and got the glasses ordered…she was excited about the “weightless glasses” she discovered.

We talked about going to Disneyland to see the fireworks and return to the year 1955 but Paul flaked out since he did not sleep the night before, we decided just to go home.  Paul crashed for about an hour and a half and then returned to the land of the living.  We decided to stay home and watch TV.

Just an old retired guy trying to finish out my last years on this planet loving my best friend and wife, having fun, learning, and passing on helpful things to others.
View all posts by Paul →
This entry was posted in Food and Wine, Friends, Gardening, Just Us and tagged Dining Out, Disneyland, Doctor, Friends. Bookmark the permalink.
Powered by Maribol IMDB Plugin