Did You Know: The Scots have a word for that panicky hesitation you get when talking to someone whose name you can’t remember: tartle.

We stayed home today and I did some walking in the morning.  I needed some birthday cards so I went to Rite Aid which is about an hour and forty minute walk.  I saw a friend but I was tartled! It is  Scottish term means ‘the act of hesitating while trying to remember someone because you’ve forgotten their name’ 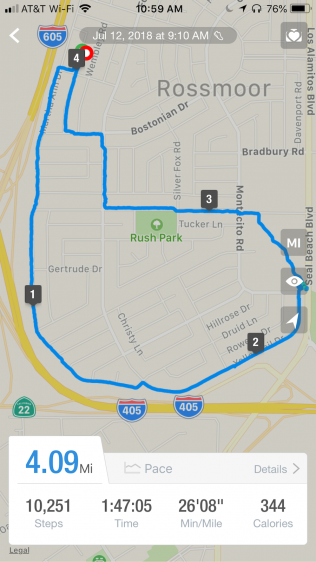 What a magnificent tree with its blooms in full regalia!  The blossoms have not began to fall yet but when they do it will be a purple carpet for sure. 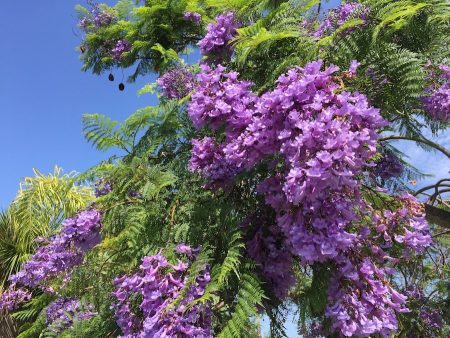 Just an amazing Jacaranda… Had to walk under it several times!

Jacaranda is a genus of 49 species of flowering plants in the family Bignoniaceae, native to tropical and subtropical regions of Mexico, Central America, South America, Cuba, Hispaniola, Jamaica, and the Bahamas.

After getting home we ate and then Paul worked in the yard for three hours trimming the top of the orange tree so the sun could get into the inside of the tree…filled a 100 gallon container with the results!  I also painted the bottom of the tree trunk white. There are a few reasons why I paint their tree trunks white: It helps prevent sun damage to the trunk tissue, especially if the tree has thin bark. The white paint reflects the sun. It acts as a pesticide, keeping bugs from burrowing into the trunk. Plus, it looks neat!

We watched TV in the late afternoon but then Sue got sick and we decided to stay home and not go to the Phoenix Club.  I was worried because of the recent trip tot he hospital and did not want a repeat of that event.

She crashed about 10:00 PM and I plan not to let her sleep too long in the morning. so make sure “the problem” from July 2nd does not return.

I went to the computer room and worked on some pages.  At 10:30 PM I decided to look through Netflix for a Sci-Fi series to watch and stumbled upon “Star Crossed”.        Read More

Star-Crossed is an American science fiction romantic teen drama television series created by Meredith Averill. Star-Crossed premiered on The CW on February 17, 2014. On May 8, 2014, The CW cancelled Star-Crossed after one season.

Set in the near-future in 2024, the series follows a romance between a human girl named Emery and an alien boy named Roman when he and six others of his kind are integrated into a suburban high school. It is filmed and takes place in Louisiana in the fictional town of Edendale.

So I am now hooked and watch it in the corner of the computer screen when I spent time on the computer!

Just an old retired guy trying to finish out my last years on this planet. I lost my best friend and wife in early 2020. I was blessed again by reconnecting with Dr. Mary Côté, a long-time friend. Mary and I got married July 28th, 2021, and are enjoying life together and plan to spend the rest of our lives being a blessing to our friends and family.
View all posts by Paul →
This entry was posted in Gardening, Just Us, Walking and tagged Just Us, Vegetable Gardening, Walking. Bookmark the permalink.