Sunday, A Day Of Rest!

M-m-m-m-m-m: Consciousness – the time between naps.

Yep… Up bright and early ready to face the day.  We listed to the Jesus Christ Show on KFI performed by Neil Saavedra. Frankly, for us, it is better than going to church as we listen, learn, and many times shake our heads in acknowledging something we have been trying to understand.  Fantastic show…you might want to try it!

Did You Know: The Jesus Christ Show is a syndicated radio program that airs every Sunday from 6 to 9 a.m. Pacific Time.  It is carried on the Premiere Networks, a subsidiary of iHeartMedia, Inc. AM 640 KFI in Los Angeles serves as the flagship station where the show is produced. It is billed as “Hosted by Jesus Christ.”

Jesus is played by the show’s producer, Neil Saavedra, who wears many hats at KFI, including hosting “The Fork Report,” a Saturday afternoon food show, as well as selling advertising for the station. Saavedra refers to himself on-air as “your holy host.” He does not believe that he is actually Jesus Christ. The show describes itself as “…interactive radio theater designed to teach people about themselves and the historical person of Jesus.” The premise is presented on the air as “What if you could talk to Him, laugh with Him, learn from Him?”

Now, time for a walk! Where to go today is the question and Ralph’s is the answer…because we are out of ice cream! OMG…tell me it ain’t so! So off I go facing the wild animals of Rossmoor! Today I met up with three old doggie friends and they remembered me…love those babies! 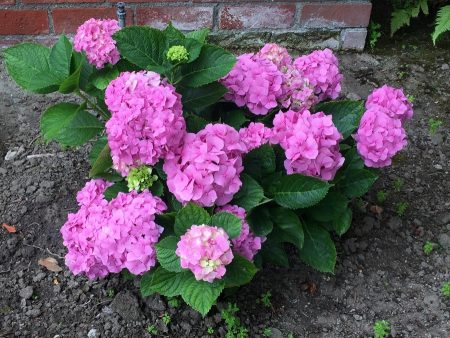 The flowers in our beighborhood are always amazing

What could it be?  A sink which was turned into a great planter! 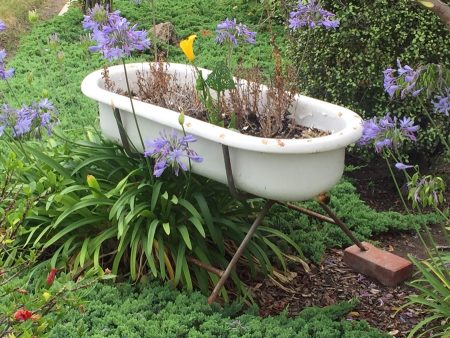 Dear! What should we do with that old sink?

The differences in the colors always strike me… Daisy’s are such a bright white with large petals and then immediately adjacent to them are a mist of dark purple micro-flowers. It must confuse the bees!  The name “daisy” is considered a corruption of “day’s eye”,because the whole head closes at night and opens in the morning. Chaucer called it “eye of the day” 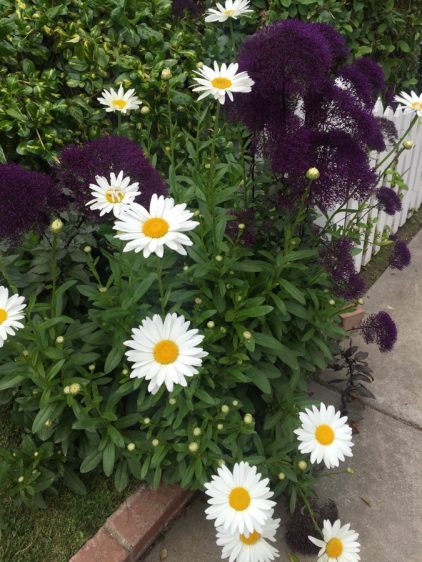 Daisies and their purple friends

Not to be out done, the rose makes a statement.

Did You Know: The largest living rose is in Tombstone, Arizona. When it is in bloom it has over 200,000 blossoms, and is supported by an arbor under which people can sit. It is a white Rosa banksiae.

The longest living rose is believed to be over a thousand years old and grows on the wall of Hildesheim in Germany. Its presence has been documented since 815 A.D. It is a wild dog rose, or Rosa canina. 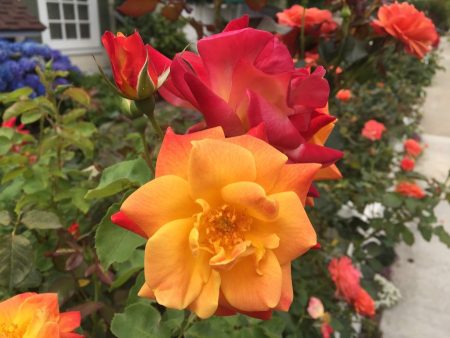 Returning home, we had lunch and, of course, part of lunch is having corn on the cob fresh from the garden!  Did I saw fresh? 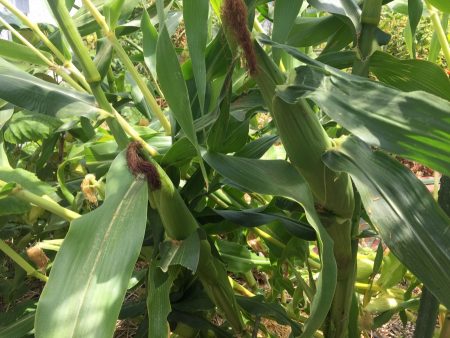 The corn was no heavy, the stalks began falling over but that’s OK…easier to pick!  We have about a weeks supply remaining and then we replant so we can have some more in September!

Did You Know? Corn is a high-carbohydrate food with lots of fiber, some protein, B vitamins (e.g., thiamin and folate), a little vitamin C and a handful of minerals. Treating corn with lime (as in tortillas) makes certain amino acids and niacin more available to the body. Yellow corn contains some beta carotene and is rich in lutein and zeaxanthin—which may help keep eyes healthy and possibly protect against cataracts and age-related macular degeneration. Corn contains more calories than most veggies: 175 in a cup. 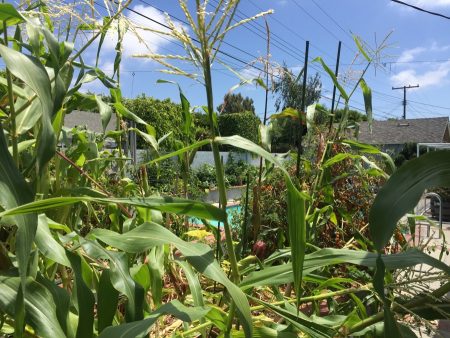 The corn was so heavy it fell over!

After lunch, Paul worked in the yard and finally, after a couple of months, got the boxes requiring storage down to a small number which can be stored easily.  We planned a shed but why?  The stuff we are keeping will be ZERO to our kids and be tossed out when we leave so why not reduce it now!

Random Memories:  In some of the boxes, I found a Christmas present I made for my father in 1951 (Sue was only six months old then).  It was my hand held against a red sheet of art paper and someone sprayed a white paint to outline my hand! On the back side, in my writing, it said “To ym Dad”… Yes, it was supposed to be “my” but I always remembers the rules of english stating that “y” before “m” except after “c”…or something like that! Made me think a lot about my dad!

About 3:00 PM, I headed inside to watch TV with Sue…we are on season three of “Republic Of Doyle”. The show is filmed in and around St. John’s, Newfoundland and Labrador. The show’s star, Allan Hawco, is also executive producer/showrunner/co-creator and head writer of the show.

We skipped dinner and just watched a couple of movies before heading for the sack!

Just an old retired guy trying to finish out my last years on this planet. I lost my best friend and wife in early 2020. I was blessed again by reconnecting with Dr. Mary Côté, a long-time friend. Mary and I got married July 28th, 2021, and are enjoying life together and plan to spend the rest of our lives being a blessing to our friends and family.
View all posts by Paul →
This entry was posted in Gardening, Just Us, Walking and tagged Just Us, Random Memory, TV Movies, Vegetable Gardening, Walking. Bookmark the permalink.