Thoughts: Do you realize that, in about 40 years, we’ll have thousands of old ladies running around with tattoos?

Today we are off to see the back doctor and report on “the shot”.  We went to the appointment fully expecting him to say do the surgery.  He surprised us by saying “Let’s do another couple of CT guided shots and see if we can’t get it to last longer and avoid the surgery“.  It sounds like the surgery is fairly significant, so he would like to avoid it if possible.  We can live with that!

We were so quite happy and headed for home to grab a bite to eat before going to Disneyland.  We stopped by Old Ranch to make arrangements for an upcoming event and we called Becca to do some coordination.  We asked if she wanted to join us at Disneyland this evening for a bite at Catal and she said “See you at 6:00 PM”.  Excellent!

We arrived at 3:15 PM and entered Disneyland for a stroll around the park. 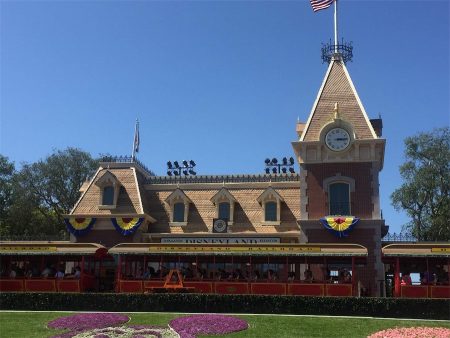 We have arrived right on time

The parade was at 3:30 PM and it was a Pixar special.  We went to our normal location which we have down to a science.  People looked at us as being crazy because we parked the wheelchair in a specific spot.  When the poles and ropes went up, we were right in the proper place and those in front of us had to move.  We found a place for three little guys (ten year olds) to sit by the wheelchair and see the parade.

Random Thoughts: Paul was at Disneyland opening day and will always remember that hot July afternoon in 1955 when you could still smell the blacktop which was justg poured and the trees that were so small!  People dressed up for the even and some ladies even had hats on and dresses with high heeled shoes.  Paul remembers wearing dress pants and a long sleeved shirt.  Today the people dress like absolute slobs…it’s pretty disgusting.  Bring back the 1950’s when people caredd about what they looked like! 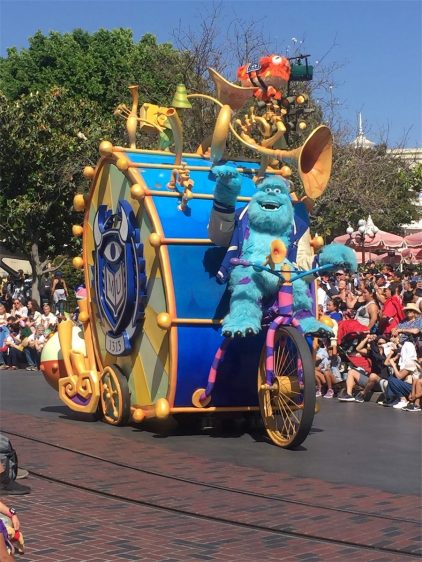 The green guys were really dancing up a storm and were shaking hands with the folks sitting along the parade path! 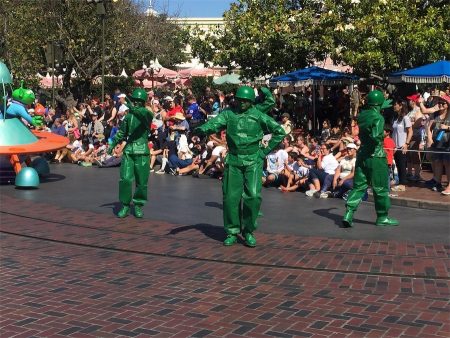 They were full of energy!

The turtle was shooting water at the crowd..it felt pretty good on this nice warm 80 degree day! 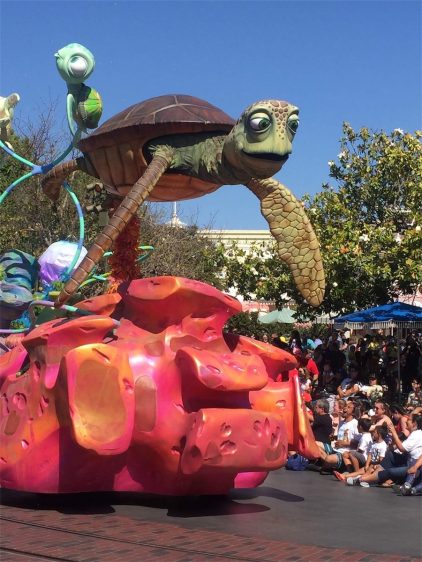 We departed Disneyland about 5:00 PM and went to Catal for dinner.  We are blessed with a fantastic family.  Becca and Lilly, Robin and Bob, and us!  Nick stayed home and studies for finals!

Random Thoughts:  Paul’s Mom and Dad loved family and would have been excited to see their family all together at the happiest place on earth.  Paul is blessed to be with Sue who also enjoys her family! Paul remembers going to Disneyland on opening day with his Mom and Dad.  Believe it or not, Mom wore a dress, Paul wore dress pants, and dad was in a sport coat..those day were different than today! 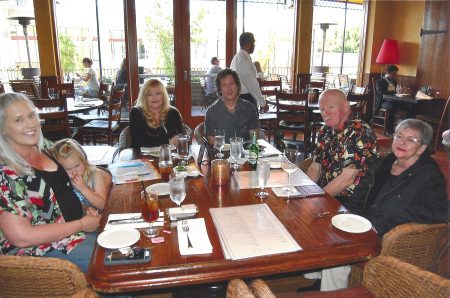 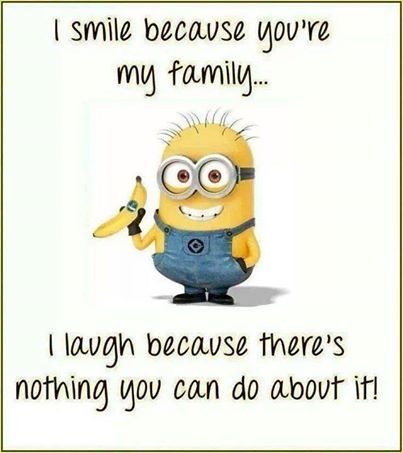 Sue had the veggie paella which was excellent.  The veggies looked quite interesting on the bed of “dirty Cajun rice”. 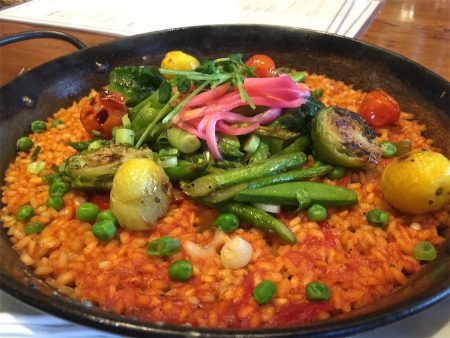 The veggie paella was not only good tasting but nice to look at!

Paul did the lamb chops and they were OUTSTANDING.  Four chops filled Paul up and that’s saying something!  They were “melt in your mouth” good. 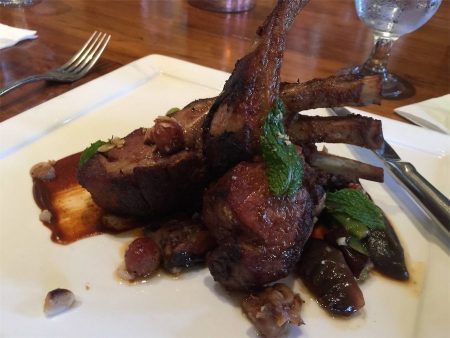 Bob did the pork chops and it also looked to be cooked perfectly.  When Bob was done, the plate was so clean it could have been put back on the shelf! The waited asked Bob “So, what didn’t you like about the pork chop?” 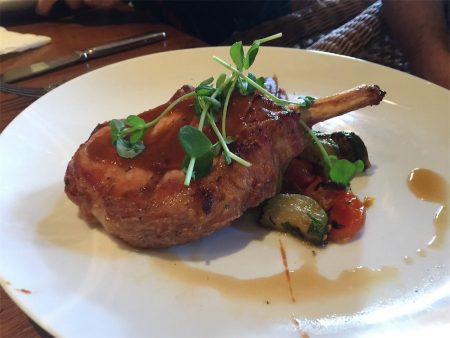 It’s our tradition to have a root beer float at dinner at Catal and this evening was no different that others EXCEPT, no Nick.  He was studying for finals. 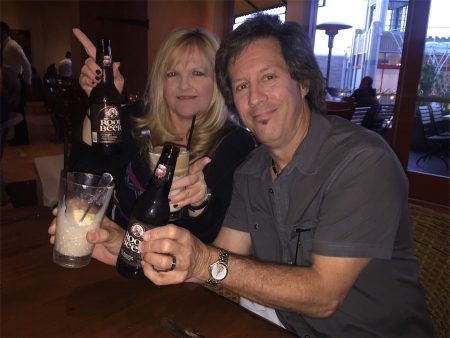 Thinking of you Nick!

Miss Lilly knows the tradition and she joined us adults having a beer. We had six of them!  Sue and Paul shared one. 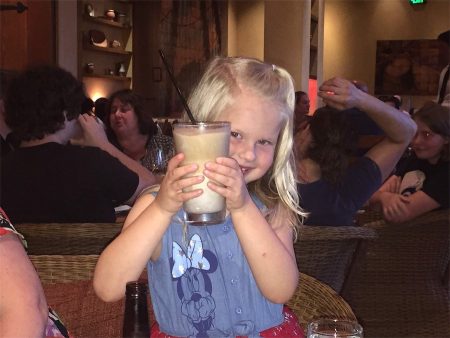 Guess who is a “Daddy’s Girl”.  Becca laughed saying that “when daddy gets home, I’m chopped liver!”.  Paul thought he had good pictures of Becca but alas, she was next to Lilly and Lilly was moving 60 miles and hour so Becca’s picture did not come out! 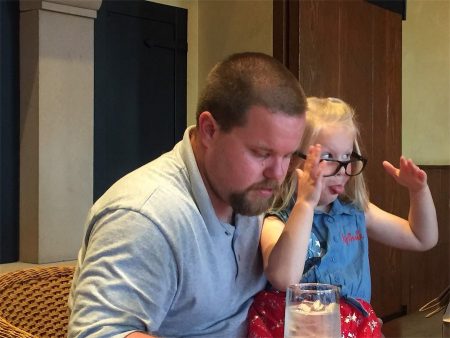 What is she saying?

We call her “Professor Lilly”…looking grown up in glasses! 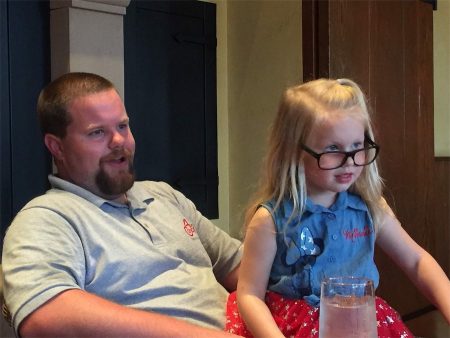 We headed for home about 9:00 PM after a wonderful evening with family!  When the bill came, it was $247 and Paul was shocked as he was expecting the normal $400+.  After examining the bill and thinking about it,  Paul had O’Doul’s, Sue brought her wine, Bob and Robin had cokes and Bob has two wines, Becca did not drink, and Zack had a beer.  The lack of drinking cut the bill in half as in the old days, Sue and Paul would be good for six glasses of wine at $15/glass or at least $90.

Just an old retired guy trying to finish out my last years on this planet loving my best friend and wife, having fun, learning, and passing on helpful things to others.
View all posts by Paul →
This entry was posted in Family, Food and Wine, Fun and tagged Disneyland, Family, Random Memory. Bookmark the permalink.
Powered by Maribol IMDB Plugin