The nicest thing about the future is that it always starts tomorrow.

Almost the weekend and Paul started out with a 90 minute walk making it to Staples only to wait in line while some dufus was trying to figure out what to print…Paul left without picking up the job!  Oh well, was a good exercise!

Some mornings Paul conducts business on the phone and today it was to our financial advisor arranging a disbursement (to pay the taxes) and to transfer funds to a 529 as three great grandchildren are having birthdays!  Our advisor, and Charlene, his girl Friday, are wonderful!

We dined on goodies from the garden and we really loved the string beans (actually bush beans).  Bush beans have virtually no “string” and you can eat the entire bean including the tips!

Did You Know? Green beans are classified by growth habit into two major groups, “bush” (or “dwarf”) beans and “pole” (or “climbing”) beans.

Bush beans are short plants, growing to not more than 2 feet (61 cm) in height, often without requiring supports. They generally reach maturity and produce all of their fruit in a relatively short period of time, then cease to produce. Owing to this concentrated production and ease of mechanized harvesting, bush-type beans are those most often grown on commercial farms. Bush green beans are usually cultivars of the common bean (Phaseolus vulgaris).

Pole beans have a climbing habit and produce a twisting vine, which must be supported by “poles”, trellises, or other means. Pole beans may be common beans (Phaseolus vulgaris), runner beans (Phaseolus coccineus) or yardlong beans (Vigna unguiculata subsp. sesquipedalis).

PAul saw a receipt in Food Network Magazine for a “Banana Boat” and here it is!  Take a banana and open it up along the short side.  Leave the peel on the banana.  Put in chocolate chips, nuts and marshmellows (if you like) and wrap it is aluminum foil.  Onto the stove top for 2 minute a side.  Let it cool a bit and voila, a delicious dessert! 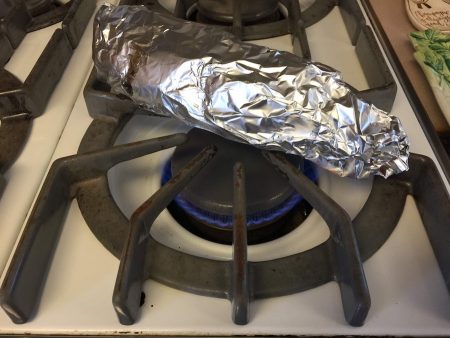 Two minutes on a side 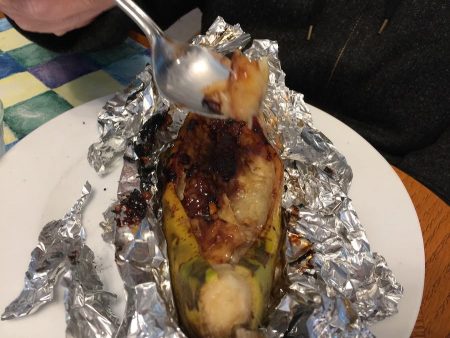 Eat the contents right out of the peel 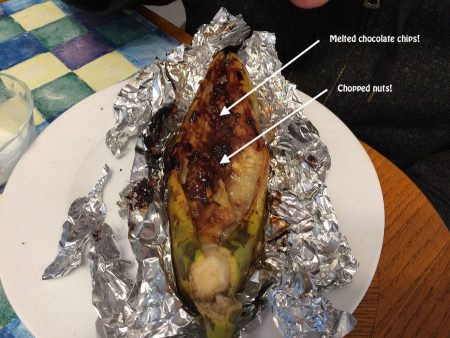 Sue decided to read for a while and Paul worked in the garden tying up the tomatoes which are escaping their cages! The berry bushes are going strong so Paul makes a harvest every day from plant to mouth in 4 seconds flat!  Wonderful!

We watch a new series called “Mysteries of Laura” before getting ready to go to the Phoenix Club.

The Mysteries of Laura is an American police procedural comedy-drama television series that premiered on September 17, 2014. It was developed by Jeff Rake, who also serves as an executive producer. The series, which stars Debra Messing as Detective Laura Diamond,  was originally adapted from a Spanish television series Los misterios de Laura by Carlos Vila, Javier Holgado,  and Gregorio Quintana de Uña. 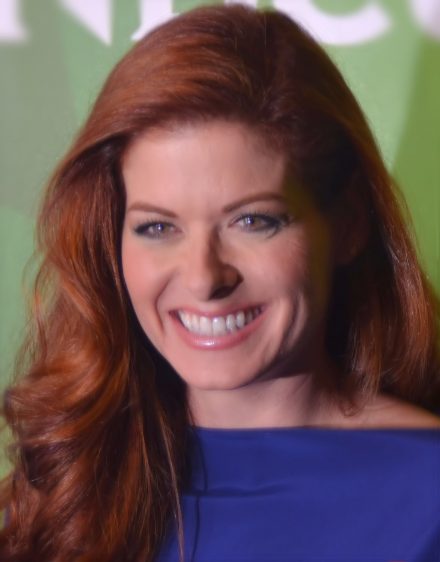 We really enjoyed her in this series!

We departed for the Phoenix Club at 6:15 PM and arrived right on time.  We danced several dances as Sue’s back is doing pretty well after the shot!  Connor apparently had strep throat so we has not there this evening. We are happy he stayed home.  The cause of strep throat is bacteria known as Streptococcus pyogenes, also known as group A streptococcus.  Streptococcal bacteria are highly contagious. They can spread through airborne droplets when someone with the infection coughs or sneezes, or through shared food or drinks.

Returning home we watched some TV and crashed at midnight!

Just an old retired guy trying to finish out my last years on this planet. I lost my best friend and wife in early 2020. I was blessed again by reconnecting with Dr. Mary Côté, a long-time friend. Mary and I got married July 28th, 2021, and are enjoying life together and plan to spend the rest of our lives being a blessing to our friends and family.
View all posts by Paul →
This entry was posted in Dancing, Food and Wine, Friends, Walking and tagged Dancing, Dining Out, Friends, Phoenix Club. Bookmark the permalink.