Best Way To Work Off Sadness Is To Work 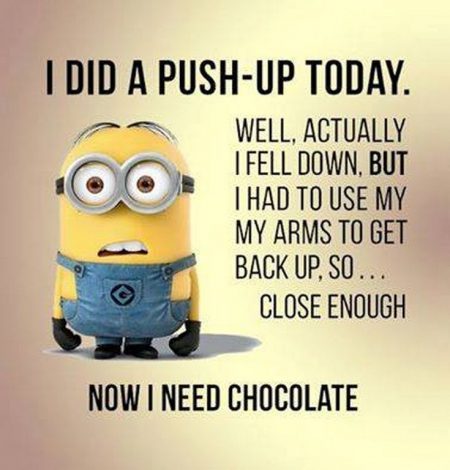 We did that.  Sue worked around the house, paid the bills, go the Topper’s Dance Club mailing ready to go.  Paul hit the garden filling two 100 gallon trash cans with the remaining cherry tomatoes and some vines that were growing over our fence from the neighbors.  He also rototilled (to till or plow (soil) with a rototiller) about 300 square feet of garden getting it ready for the winter garden planting coming up soon.

By 2:00 PM is was time for a nap as we have a musical to see about 8:00 PM this evening at the Cerritos Performing Arts Center, our first performance of this new season.   We get to the theater at 7:10 PM wanting to get a place to sit and have a glass of wine but alas, no place to sit.  Paul asked a security guard for a chair and he suggesting going to the third floor.  We did and it was fantastic.  Quiet, rest rooms neary and a table with two chairs overlooking the lobby!

Of course, Vicky had to be strapped into her seat most of the evening… Long story!  She did however talk to him at the break and Steve remembered the time he had had a cortisone shot and Vicky rubbed his shoulder!  Del told Vicky “You cannot take him home!”.

Celebrated for the hits The Way You Look Tonight, The Simple Life, Crush on You, and The Sunny Side of the Street, Emmy and Grammy winner Steve Tyrell is also a radio host on KJAZZ 88.1 in Los Angeles. Tyrell garnered a Society of Singers Lifetime Achievement Award and was declared Los Angeles Jazz Society’s Jazz Vocalist of the Year in 2008. Tyrell will perform music from the Great American Songbook and songs by Ray Charles. 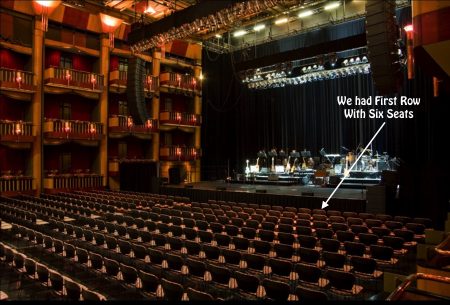 The Kuhns and Roberts joined us… We had terrific seats! 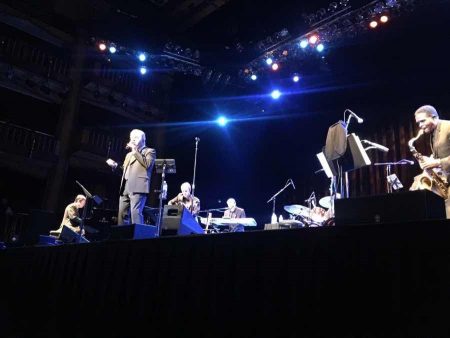 Did I say we had great seats?

We departed the show and headed home which is a few short miles away.  We watched “Friends” and then crashed.

Just an old retired guy trying to finish out my last years on this planet loving my best friend and wife, having fun, learning, and passing on helpful things to others.
View all posts by Paul →
This entry was posted in Friends, Gardening, Theater and tagged CCPA, Friends. Bookmark the permalink.
Powered by Maribol IMDB Plugin