We departed the house for Seasons 52 and enjoyed a nice meal before going to the OC Performing Arts Center to see “An American In Paris”.  While Sue enjoyed the performance, Paul thought it was too much ballet… We departed half-way through.

Did You Know? An American in Paris is a 1951 American musical film inspired by the 1928 orchestral composition An American in Paris by George Gershwin. Starring Gene Kelly, Leslie Caron, Oscar Levant, Georges Guétary, and Nina Foch, the film is set in Paris, and was directed by Vincente Minnelli from a script by Alan Jay Lerner. The music is by George Gershwin, with lyrics by his brother Ira, with additional music by Saul Chaplin, the music director.

The story of the film is interspersed with dance numbers choreographed by Gene Kelly and set to Gershwin’s music. Songs and music include “I Got Rhythm”, “I’ll Build A Stairway to Paradise”, “?’S Wonderful”, and “Love is Here to Stay”. The climax of the film is “The American in Paris” ballet, a 17-minute dance featuring Kelly and Caron set to Gershwin’s An American in Paris. The ballet alone cost almost half a million dollars.

We picked up Jan Mongel and went to the Fullerton Elks to celebrate Kathy’s 70th birthday.  Join the fun. 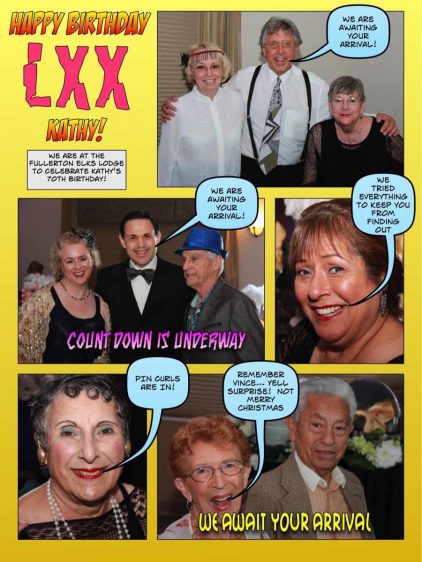 Just an old retired guy trying to finish out my last years on this planet. I lost my best friend and wife in early 2020. I am involved seriously with a long-time friend, Mary, and life goes on.
View all posts by Paul →
This entry was posted in Dancing, Food and Wine, Friends and tagged Birthday, Celebration, Dancing, Dining Out, Elks Lodge. Bookmark the permalink.