We stayed around the house today as it was cold outside.  Paul checked the garden and it is doing well, in fact, it is salad time!  After doing the treadmill and watching some TV, we got cleaned up and escaped the cabin!  On our way out, Paul picked grapefruit and tangerines for our bartender!  From one of the vantage points on the way to Old Ranch, we could see downtown the mountains and snow… wow!

The following is NOT our picture but if we could drive the freeway to LA, this would be the view! 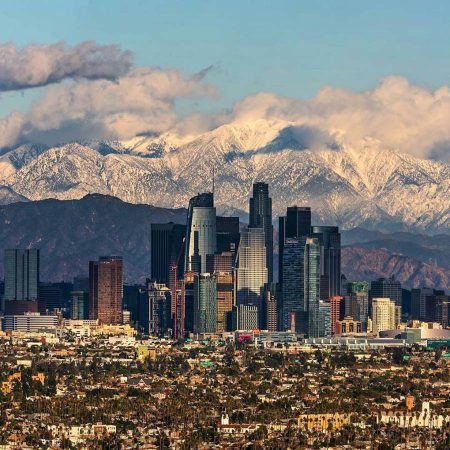 We had a lot of rain and snow in the mountains

First stop… Old Ranch.  We met up with Bunnaford and had a drink sharing our innermost secrets… That took about three seconds!   We made arrangements for Chuck to use Old Ranch for his birthday celebration in August.  We talked to Arturo and found out he likes sushi!  We told him we knew a Mexican Sushi Chef and he did not believe us so next Wednesday we are taking him to Kobe Steakhouse to meet up with Manny! 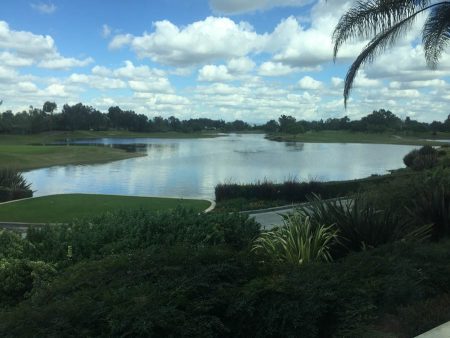 The Ranch was flooded!

After that, we continued on to Patty’s Place to see Chuck and “the gang”.  We had a Hot Toddy and a glass of wine.  Hot Toddy’s are excellent for cold evenings.  Chuck loved the gift bag of fruit and was happy for the Old Ranch arrangements!

Did You Know? A “hot toddy”, also “hot to trot totty” and “hot tottie” as well as “hot whiskey” in Ireland and Scotland, is typically a mixed drink made of liquor and water with honey (or, in some recipes, sugar), herbs (such as tea) and spices, and served hot.  Hot toddy recipes vary and are traditionally drunk before retiring for the night, or in wet or cold weather. Some believe the drink relieves the symptoms of the cold and flu — in How to Drink, Victoria Moore describes the drink as “the vitamin C for health, the honey to soothe, the alcohol to numb.”

After our Patty’s fix, we headed to Kobe Steakhouse for some saké and sushi plus Sue’s glass of wine.  We visited Manny (Manuel) and made sure he was ready to tease Arturo next week! 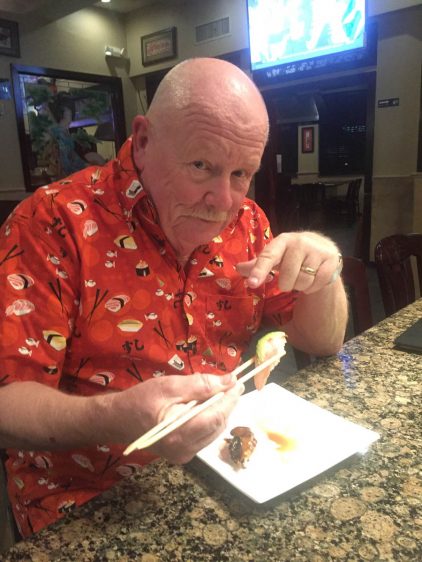 Enjoying the fishies! Manny adds jalapeño to some of Paul’s selections!

Home again we are and we watched some TV before crashing at midnight.

1.  Two antennas met on a roof, fell in love and got married.  The ceremony wasn’t much, but the reception was excellent.

2.  A jumper cable walks into a bar.  The bartender says, “I’ll serve you, but don’t start anything.”

3.  Two peanuts walk into a bar, and one was a salted.

4.  A dyslexic man walked into a bra.

5.  A man walks into a bar with a slab of asphalt under his arm, and says: “A beer please, and one for the road.”

6.  Two cannibals are eating a clown.  One says to the other: “Does this taste funny to you?”

8.  Two cows are standing next to each other in a field.
Daisy says to Dolly, “I was artificially inseminated this morning.”
“I don’t believe you,” says Dolly.
“It’s true; no bull!” exclaims Daisy..

9.  An invisible man marries an invisible woman.  The kids were nothing to look at either.

10.  Deja Moo: The feeling that you’ve heard this bull before

11.  I went to buy some camouflage trousers the other day, but I couldn’t find any.

12.  A man woke up in a hospital after a serious accident.
He shouted, “Doctor, doctor, I can’t feel my legs!”
The doctor replied, “I know, I amputated your arms!”

16.  Two Eskimos sitting in a kayak were chilly, so they lit a fire in the craft.  Not surprisingly it sank, proving once again that you can’t have your kayak and heat it too.

17.  A group of chess enthusiasts checked into a hotel, and were standing in the lobby discussing their recent tournament victories.  After about an hour, the manager came out of the office, and asked them to disperse.
“But why,” they asked, as they moved off..
“Because,” he said.  “I can’t stand chess-nuts boasting in an open foyer.”

18.  A woman has twins, and gives them up for adoption.  One of them goes to a family in Egypt, and is named ‘Ahmal.’ The other goes to a family in Spain; they name him ‘Juan.’ Years later, Juan sends a picture of himself to his birth mother.  Upon receiving the picture, she tells her husband that she wishes she also had a picture of Ahmal.  Her husband responds, “They’re twins!  If you’ve seen Juan, you’ve seen Ahmal.”

19.  Mahatma Gandhi, as you know, walked barefoot most of the time, which produced an impressive set of calluses on his feet.  He also ate very little, which made him rather frail and with his odd diet, he suffered from bad breath.  This made him (oh, man, this is so bad, it’s good) …  a super-calloused fragile mystic hexed by halitosis.

20.  A dwarf, who was a mystic, escaped from jail.  The call went out that there was a small medium at large.

21.  And finally, there was the person who sent twenty different puns to his friends, with the hope that at least half of the puns would make them laugh.  No pun in ten did.

Just an old retired guy trying to finish out my last years on this planet. I lost my best friend and wife in early 2020. I was blessed again by reconnecting with Dr. Mary Côté, a long-time friend. Mary and I got married July 28th, 2021, and are enjoying life together and plan to spend the rest of our lives being a blessing to our friends and family.
View all posts by Paul →
This entry was posted in Food and Wine, Friends, Fun and tagged Dining Out, Friends, Kobe Steakhouse, Old Ranch, Patty's Place. Bookmark the permalink.