Visiting The Doctors… Sort Of!

While with Dr. Asbill, we opened up a discussion on the seven month battle with breathing, pneumonia and bronchitis.  He strongly suggested a pulmonary doctor look at all the data.  We followed his suggestion and made arrangements to see Dr. Gomez tomorrow at 2:20 PM.

Dr. Asbill suggested prednisone immediately followed by a complete blood panel.  His observations was that after listening to Paul’s lungs, he said “Your lungs do not seem happy at all”.

Dr. Asbill sometimes understates things but he is excellent as he does not jump to conclusions.  He stated “Fighting pneumonia and bronchitis for months without a fever just doesn’t add up!”.  He is very thorough.

By the time we departed his office, Paul’s coughing was so bad that going to the dentist for a cleaning would have resulted in biting our dentist and we really like Dr. Flemming.  We cancelled out on him and just went home and rested, got the medicine, and stayed home until it was happy hour time.

To Malarkey’s and beyond!  Irene joined us with Wally and Ghislain.  We will not have Greg for several month’s as he has signed up for an extended AA course called “Big AA”.  Please read about AA in Wikipedia. 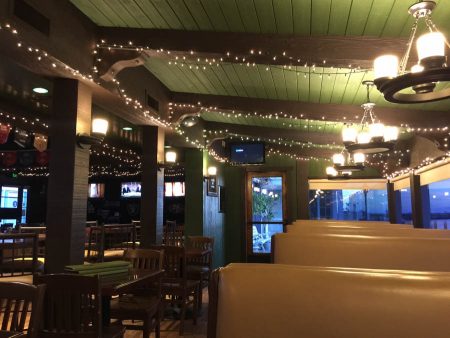 We dined in the bar for a change as the TV’s were turned down pretty low!

The day was slightly rainy but it had cleared up so the sunset was subdued but interesting.  The many inside lights reflected against the glass giving us an eerie view of the sunset.  We all laughed and giggled and heard about the latest goings on in Paris from Wally and Ghislain’s month long stay in France over the holidays.  The Muslim infestation was pretty bad and people are considering mass deportations. 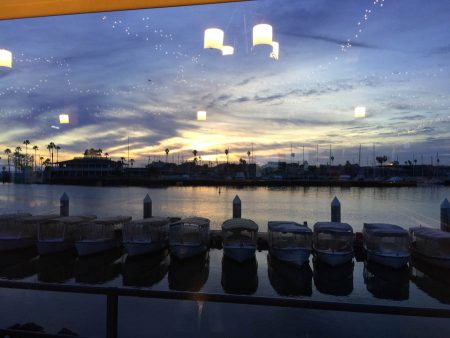 The view out the window with the reflections was interesting

After dinner we headed home and again attacked the treadmill and watched TV until about midnight.  It’s going to be a big day tomorrow with the new doctor and perhaps some answers.

Just an old retired guy trying to finish out my last years on this planet loving my best friend and wife, having fun, learning, and passing on helpful things to others.
View all posts by Paul →
This entry was posted in Food and Wine, Friends, Fun and tagged Doctor, Friends, Happy Hour, Malarkeys. Bookmark the permalink.
Powered by Maribol IMDB Plugin