We started off the day with rain and that was OK as it was pretty mild.  We got ready to go out and see the new pulmonary doctor, Dr. Gomez.  Really a neat guy!  We came prepared with the complete story of the breathing issues and he was amazed we were so prepared.  It did not take him long to understand a) we were engineers and b) we were a well oiled team!

NOTE FROM PAUL – I am so happy that we are both so interested in each other so much we go to each other’s doctor and listen, participate, prepare and inquire as to what is said.  Being alone, when you are a little nervous already,  often leaves to missing critical questions, getting off track, not being able to recall what the other one knows…  I am blessed with a wonderful partner in life!

He suggested a complete breathing test which had a fancy name.  It took an hour and Paul never breathed so many ways in his life.  Suck in, blow out… Stop-Start, slow-fast… He was literally seeing stars at the end of the test.  The results was not seen by the doctor but the technician, a beautiful and talented young lady, gave Paul the “thumbs up” meaning nothing appeared to be serious.  She said the bronchial tubes seemed to be  “blocked”… perhaps inflamed… Whatever that means.  The question is, acute or long term?

Paul’s lung capacity, even after thirty years of smoking (Grandson Connor, listen to this) he was at 87% of normal for a 72 year old.  However, smoking can have a long term effect on the bronchial tubes leaving the ability to fill and exhale significantly reduced. 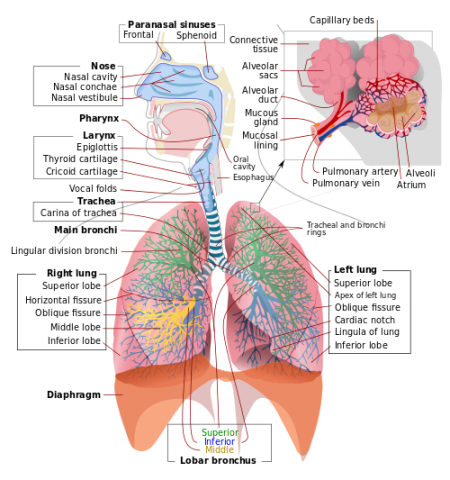 The blue main tubes (main bronchial) in the center of the image are “blocked” meaning not allowing full air flow to the lungs.

We spent about two hours at the office and then ran home to pick up the CAT scan CD’s from the scanning facility (Total Care).  We will drive them over to the doctor tomorrow morning.

After returning home, we headed to Kobe Steakhouse for dinner.  Paul did the sushi thing and ordered hot saké (rice wine) for Sue to hold in her hands… Works better than gloves.

DID YOU KNOW – Sake, also spelled saké in English, is a Japanese rice wine made by fermenting rice that has been polished to remove the bran. Unlike wine, in which alcohol (ethanol) is produced by fermenting sugar that is naturally present in grapes, sake is produced by a brewing process more like that of beer, where the starch is converted into sugars before being converted to alcohol.

The brewing process for sake differs from the process for beer in that, for beer, the conversion from starch to sugar and from sugar to alcohol occurs in two discrete steps. Like other rice wines, when sake is brewed, these conversions occur simultaneously. Furthermore, the alcohol content differs between sake, wine, and beer. Wine generally contains 9%–16% ABV, while most beer contains 3%–9%, and undiluted sake contains 18%–20% (although this is often lowered to about 15% by diluting with water prior to bottling).

Paul was horrible, as usual, and texted these pictures over to Joe, our son, who just loves sushi! 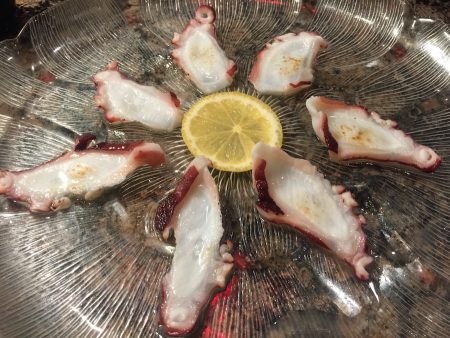 The sushi chef, who really likes us, made a little special things called a “wecyou”.  He said it was cream cheese, and shrimp wrapped in butter lettuce.  Looked like we were being watched.   That’s we called it a “We See You”. 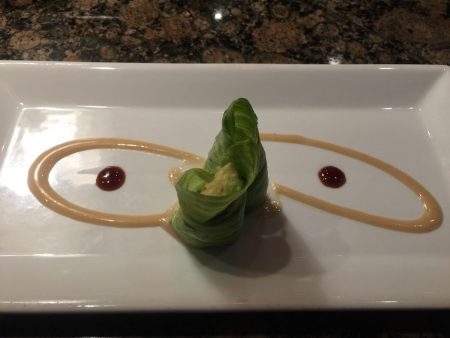 Bunnaford dropped by to say hello as she was going to Old Ranch and to text us back and say where she was going would take longer than just dropping by!  That was great as we bought her a good glass of vino and she could only finish half of it…  Guess where the remaining part went?  Yup!  Mixed well with the saké!

We headed home which is about six winding blocks away and hit the treadmill and watched “Last Man Standing”, “Cheers” and an “NCIS New Orleans” mixed in so we could get our violence fix.  We finally crashed at midnight listening to the pounding rain!  Looks like another wet one tomorrow.

It was a pretty good day… Blood Panel was perfect, prednisone started, breathing test complete… Just waiting for the results!

Just an old retired guy trying to finish out my last years on this planet. I lost my best friend and wife in early 2020. I am involved seriously with a long-time friend, Mary, and life goes on.
View all posts by Paul →
This entry was posted in Food and Wine, Friends, Fun and tagged Dining Out, Doctor, Friends, Kobe Steakhouse, Wine. Bookmark the permalink.
Powered by Maribol IMDB Plugin