Our Avacado tree went berserk this year… growing like made so much so that some limbs began to break.  So, we called the “tree man” and the results were great. Did you know?

The avocado (Persea americana), also known as palta or aguacate (Spanish), butter pear or alligator pear, is a tree native to the Caribbean, Mexico, South America and Central America, classified in the flowering plant family Lauraceae along with cinnamon, camphor and bay (laurel) leaves. The name “avocado” also refers to the fruit (technically a large berry) of the kupa shell that contains a pit (hard seed casing) which may be egg-shaped or spherical.

Avocados are a commercially valuable crop whose trees and fruit are cultivated in tropical climates throughout the world (and some temperate ones, such as California), producing a green-skinned, pear-shaped fruit that ripens after harvesting. Trees are partially self-pollinating and often are propagated through grafting to maintain a predictable quality and quantity of the fruit. 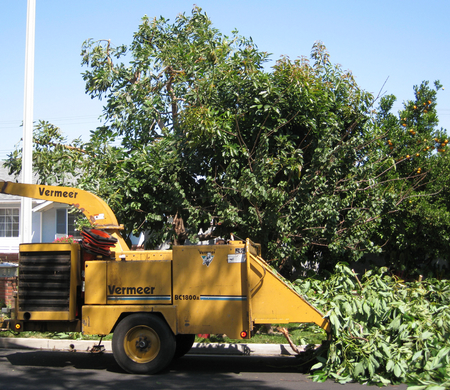 Wow did it get trimmed or what?

Just an old retired guy trying to finish out my last years on this planet loving my best friend and wife, having fun, learning, and passing on helpful things to others.
View all posts by Paul →
This entry was posted in Gardening. Bookmark the permalink.
Powered by Maribol IMDB Plugin