We Awaited The Arrival!

Fact: Dentistry goes all way back to when humans first had teeth…well not quite that long. However, one study found evidence of teeth being drilled in skulls that dates from 7,500 to 9,000 years ago. The holes were likely made using a prehistoric bow-drill. Could that be the work of the first dentist? Other biting research conducted by the University of Bologna, Italy on a 14,000-year-old skull found that “one rotten tooth in the jaw had been deliberately scoured and scraped with a tool,” according to the BBC. That makes dentistry one of the oldest recorded professions and is definitely a reason to smile.

The sun was still struggling to get up above the horizon when we were outside having our morning coffee.  8:00 PM was the target time.  He made it just under the wire. 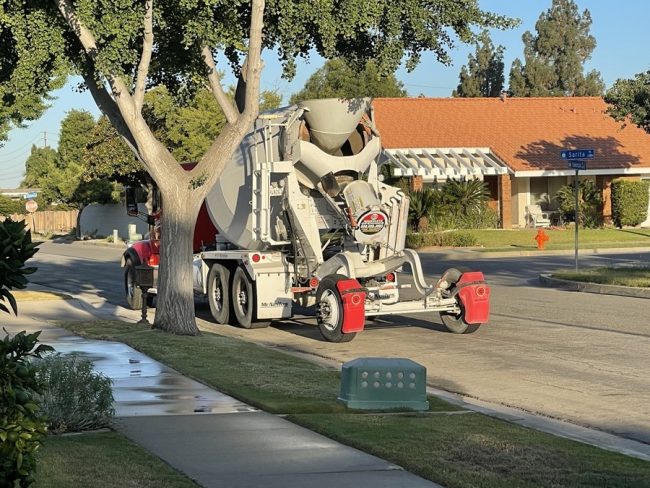 The pumper truck was really busy today as it had to move 10 yards of cement from the street clear to the back of the property which is a little over 200 feet. You could tell the pump was struggling to get it back there. 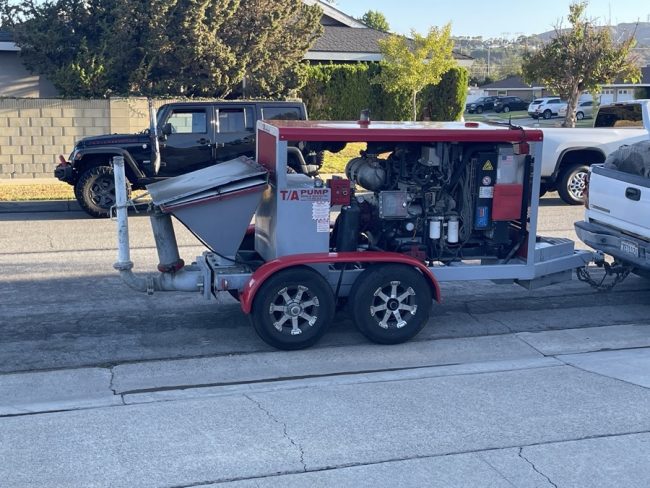 The pumper had almost 200 feet to reach the garden.

It took longer to make the connections with the hose and run the hose clear to the back than it did to actually for the concrete. Those parts filled the entire back of a pick up truck. 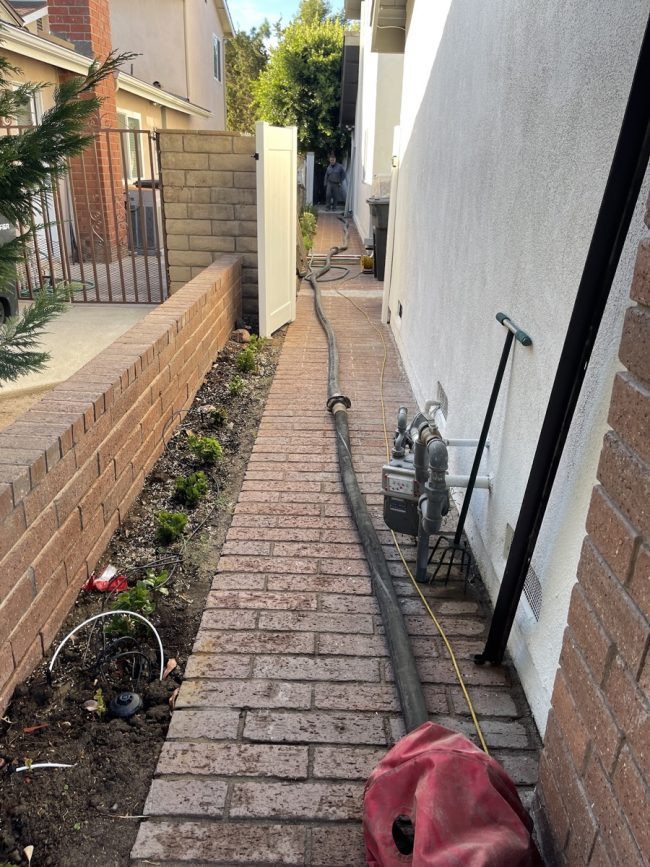 It looks like a chick attic snake and I know that Scout, The Wonder Dog, was a little worried about it. 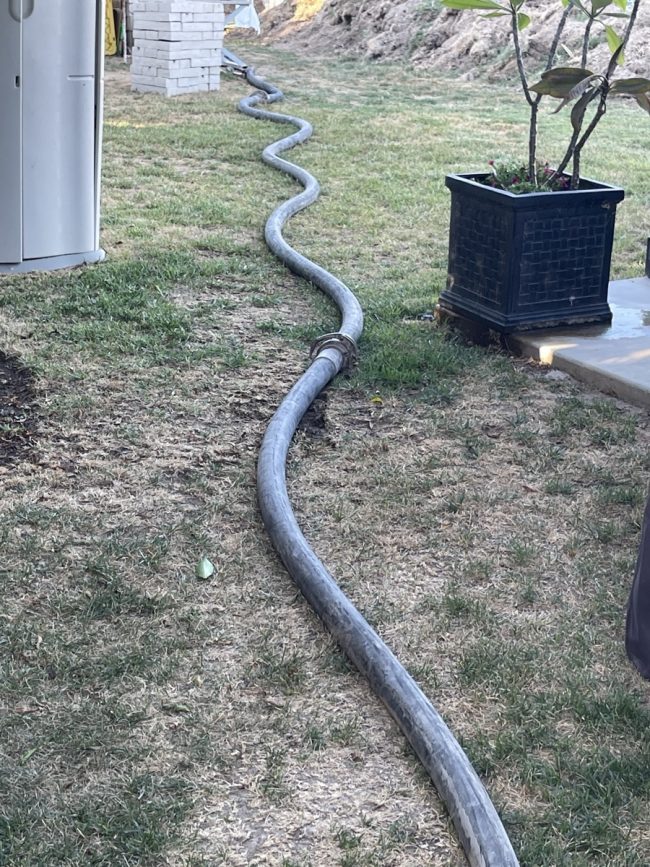 I mean a lot of hose.

You’re comes the mud; Gary and his measuring stick right in front of where the concrete came out of the hose so we didn’t have to do much moving of the mud around once it was in the ground. 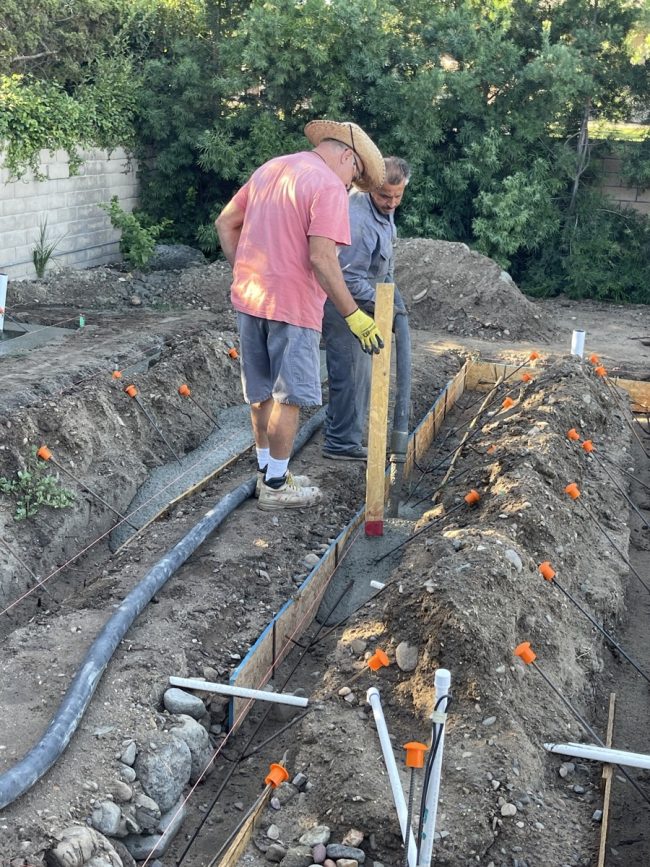 The concrete pours out smoothly.

Mary to the rescue! I wondered where she was and about 20 minutes later she came out with a big plate of blueberry muffins and I mean blueberry. She took all of the blueberries that we had in the fridge into them in the batter and it was really juicy 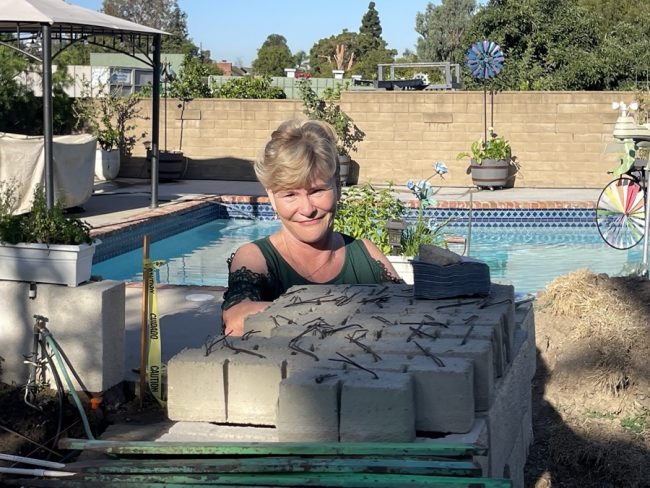 Mary baked muffins for the guys.

It took just about an hour to do the poor in all of the beds. This is the first pour and it is setting the foundation for the walls to go around the various beds. Next week we start laying the brick for the beds which will be roughly 22 inches tall, just right for us to sit down and do our gardening. 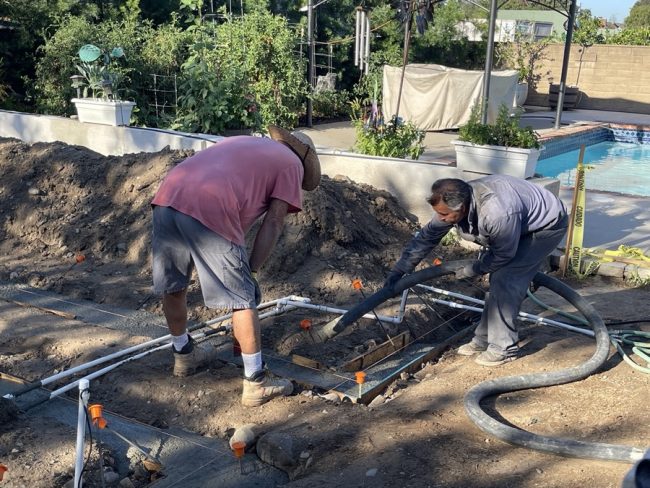 The mud was poured in an hour.

It was already in the 80s when the truck started pumping the concrete out so we had to work fast to make sure it didn’t totally set up before we leave the first course of brick. 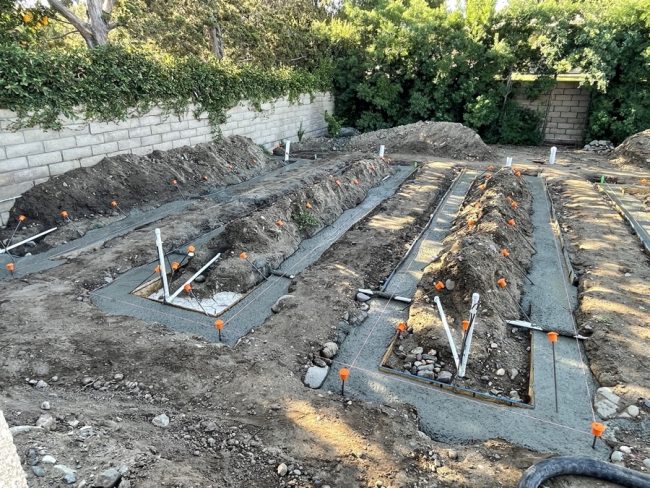 We had to work hard before it set up!

I went inside the house and got my trusty drone and flew it over the property now you can start to see where the beds are. There are five beds each of which are 25 feet long and most of them are four feet wide. The bed at the bottom right is 7 feet wide because that’s where we’ll grow our corn and melons next year.

The next pour will be the concrete between the beds and the two walkways at the top in the bottom of the garden. We expect that to occur in about 3 1/2 weeks. 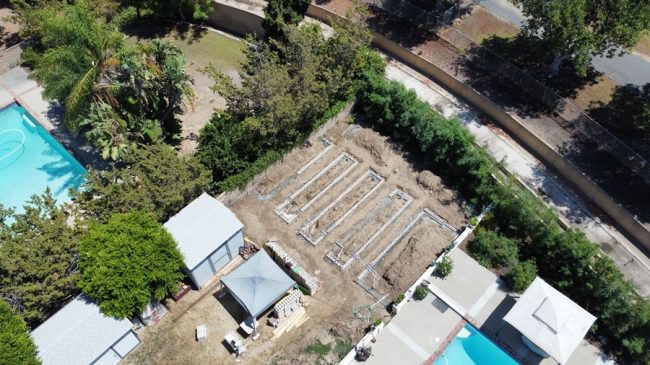 Our drone took pictures of the hard from about 150 feet up.

I love the construction work it’s time to have fun. Bob and Robin came by the house at around 4:00 o’clock and we headed to the Santa Ana Elks for their 120th birthday party. We got dressed up in costumes. 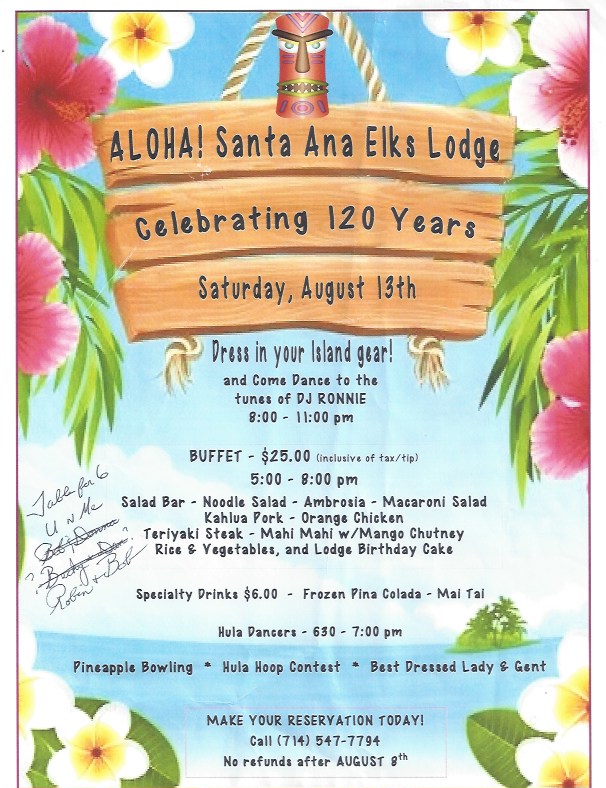 Fun was had by all! 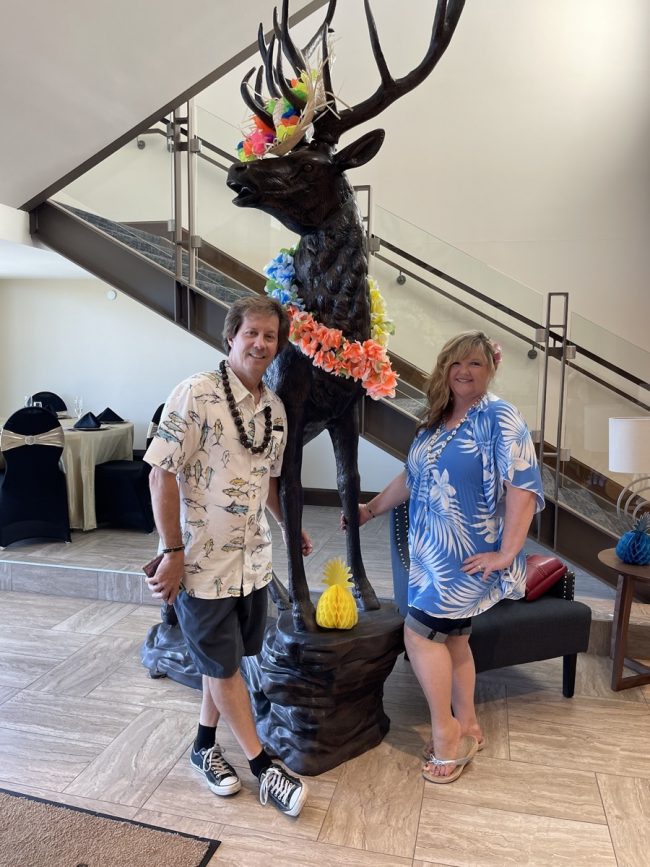 To the Elks and a visit to Hawaii!

We have a good time together and tonight. 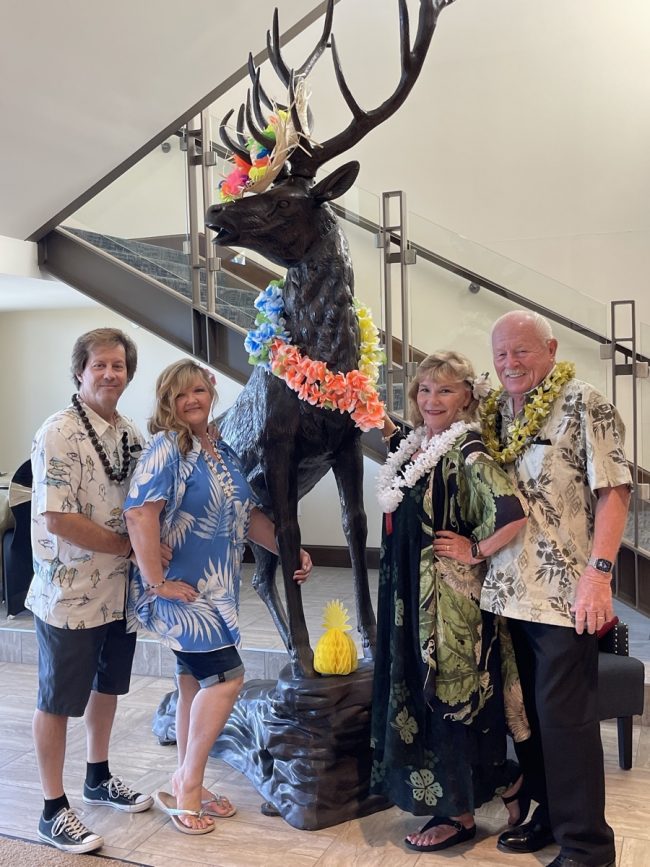 We could not get by without doing the Robin pose. 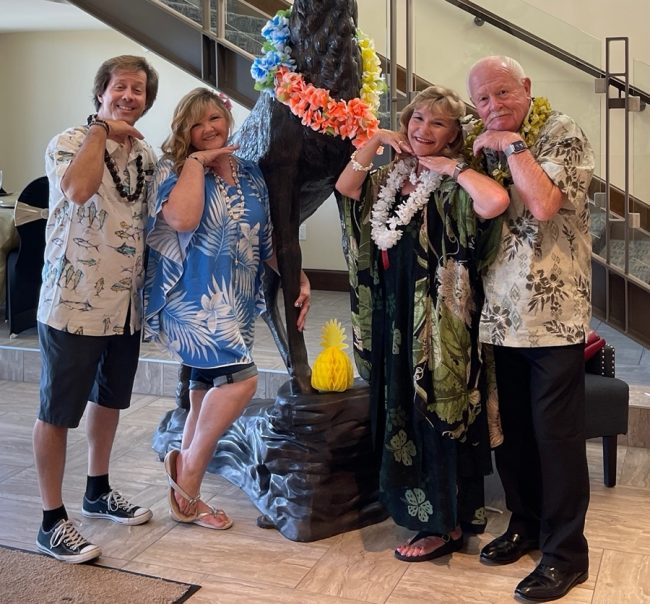 Robin & Bob didn’t have to drive tonight because I acted as a chauffeur so he may have had maybe one little Drinky poo too much. 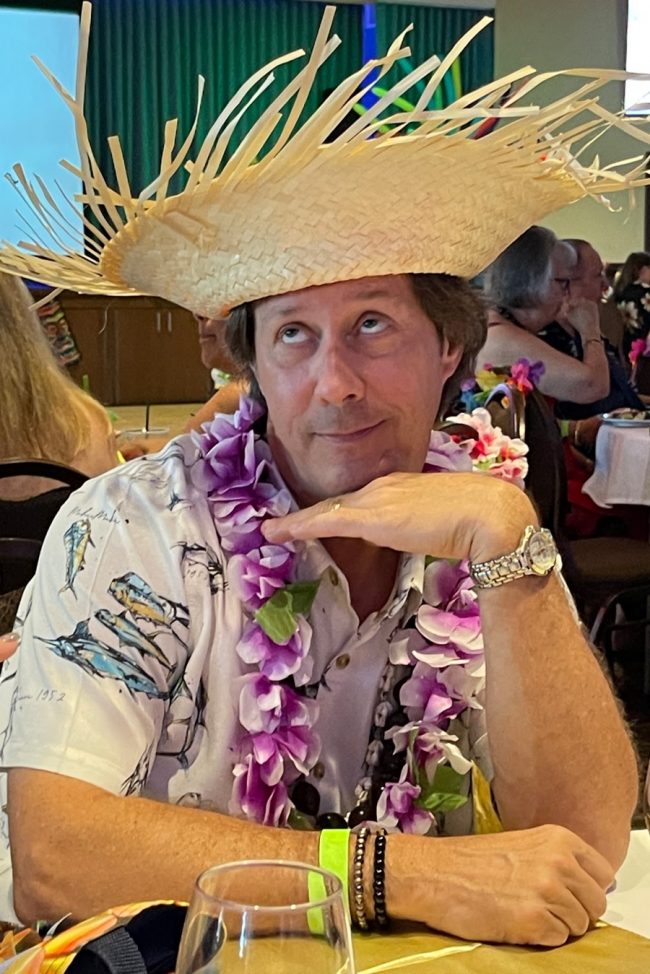 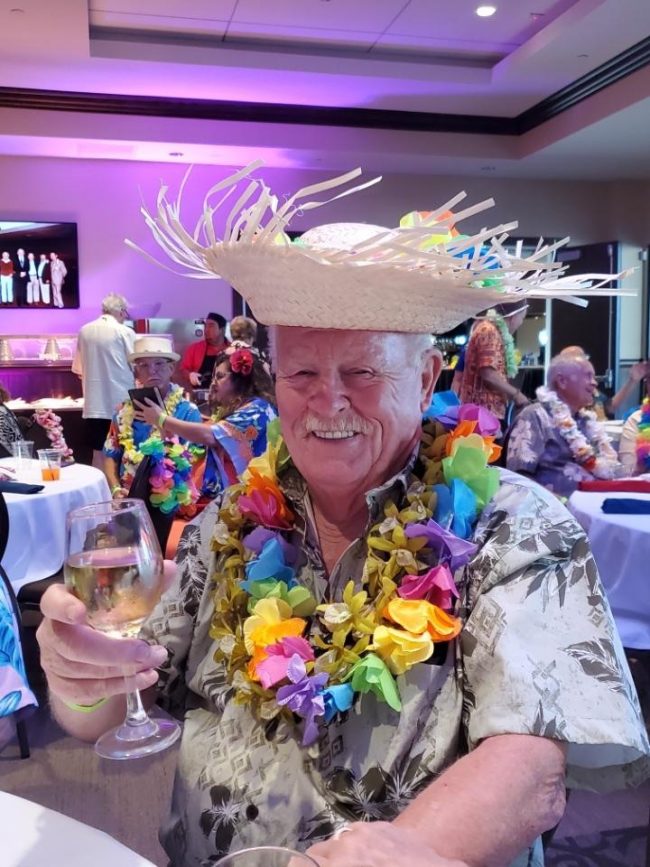 I did have a drink!

The alley was set up on the stage and Bob bowled two strikes back to back! 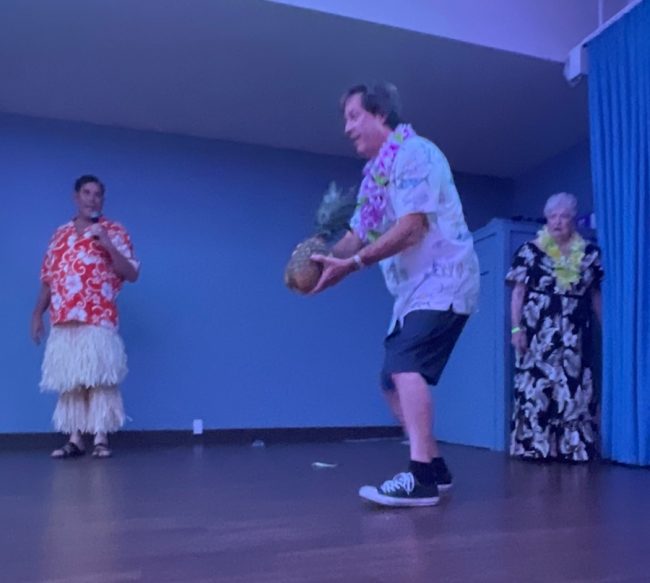 Bob does the pineapple bowling activity

The prize you ask, it was a 45 gallon jug of red wine. 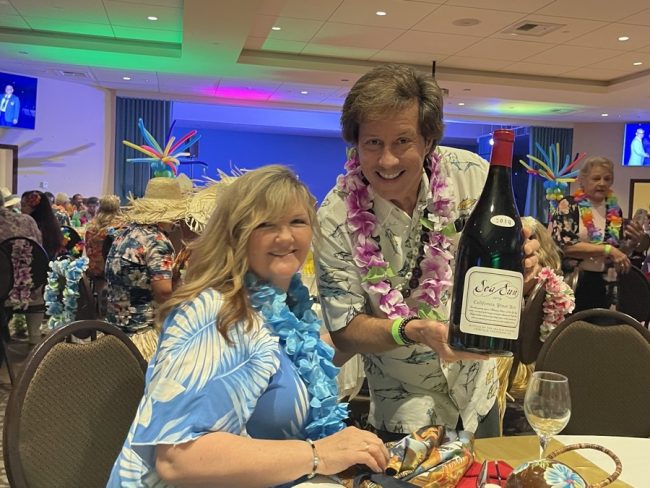 I think the ladies may have been ashamed of Bob and I for what we did. But I can’t really recollect what it was, it must’ve been bad. 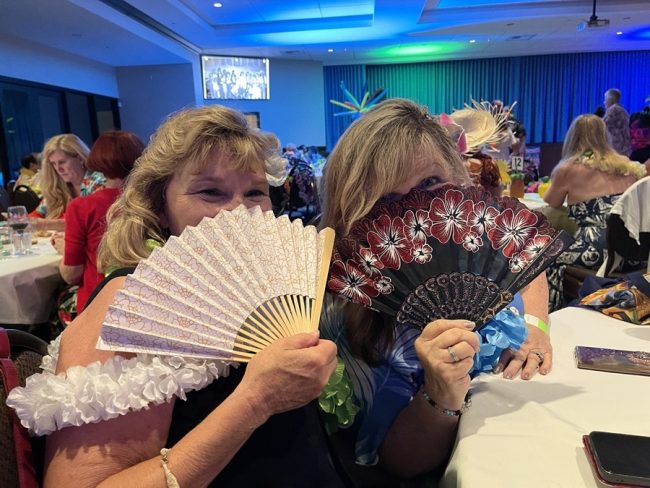 Did we make the girls ashamed of us?

We headed for home after 10 PM and ran into two hoochy-koochy girls in the parking lot. 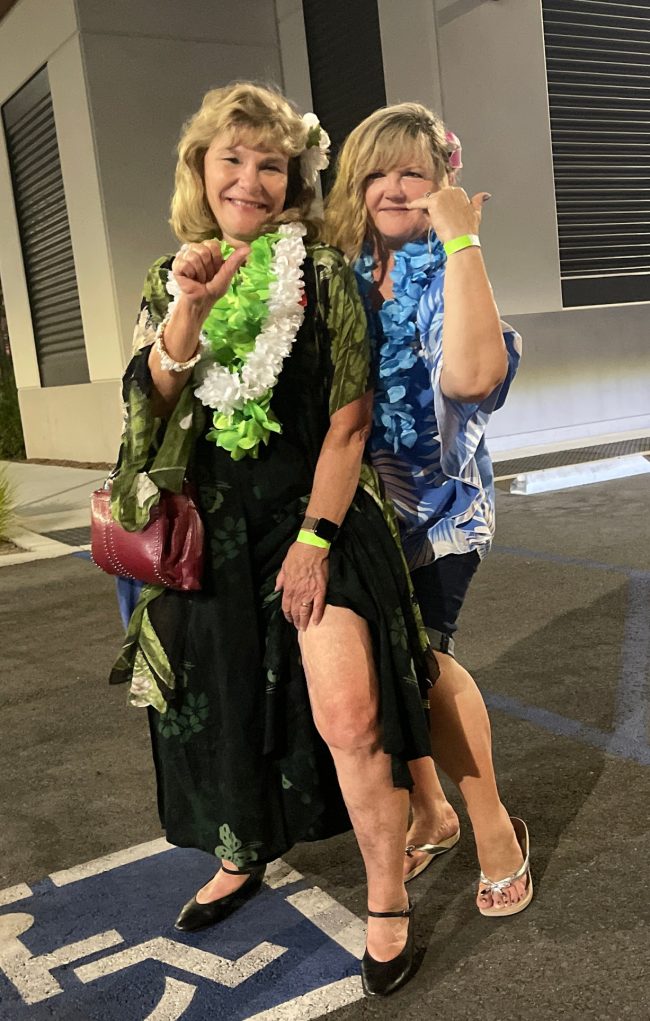 I hope Mary and Robin didn’t see us!!

It was a good night and the food was not too bad considering every serving 170 people in a short period of time. The music was great, and we danced and danced and danced until the wee hours or 10 PM, whatever comes first.

Just an old retired guy trying to finish out my last years on this planet. I lost my best friend and wife in early 2020. I was blessed again by reconnecting with Dr. Mary Côté, a long-time friend. Mary and I got married July 28th, 2021, and are enjoying life together and plan to spend the rest of our lives being a blessing to our friends and family.
View all posts by Paul →
This entry was posted in 2022 Vegetable Garden, Dancing, Family, Food and Wine. Bookmark the permalink.