Scout is too intelligent. At 6:00 AM, he wakes up, scratches, and comes to the side of the bed with that “urgent look: on his face. He has a friend down the street, and I think he is getting bad ideas from him! 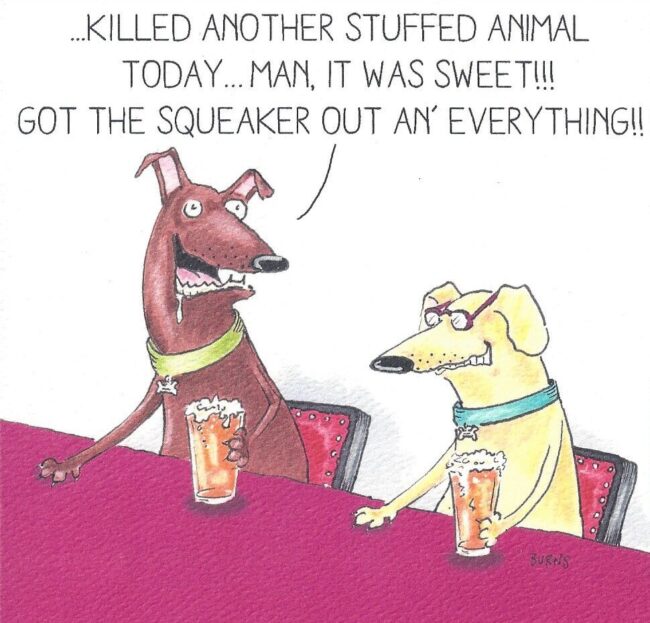 We are beginning to worry!

So now that we are up, we had our coffee and hit the office to go through the “paper” that seems to increase every day. Mary said the paper must double in size overnight. I took care of the property taxes due in three days and filled a trash can with paper I did not need!

I showed Mary all the recipes I printed out over the last several days, and we will make several of them.

It finally got late, and we hit the showers, found our clothes from the 1950s, and went off to the Santa Ana Elks for the “Sock Hop.” 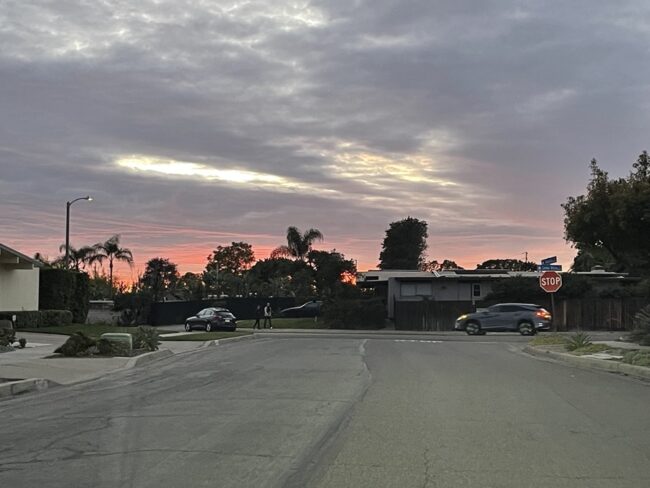 On our way to the Elks. 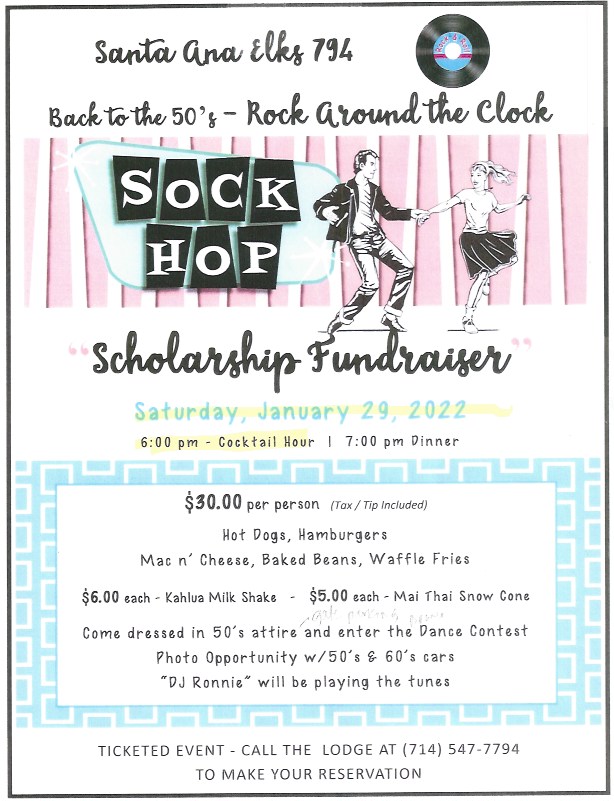 The old car club had several vehicles on display! The 51 Ford ragtop was in superb condition. 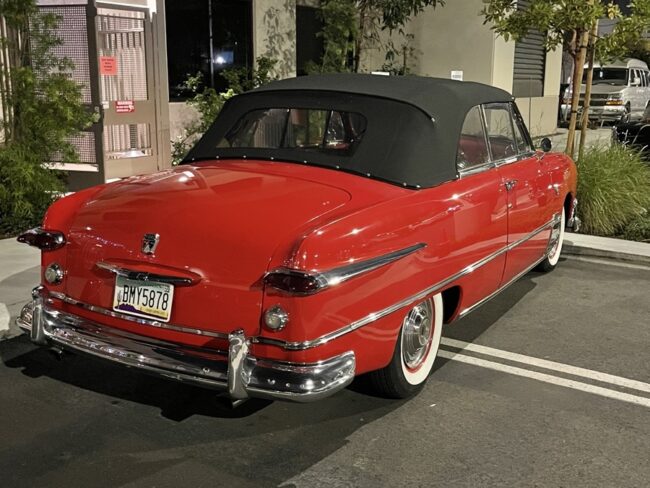 The old cars there out in force. 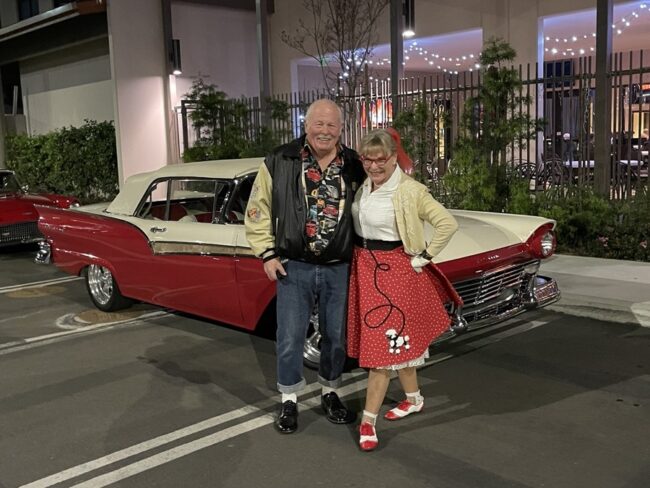 Cal Worthington has nothing on this little lady!  While looking, we also relearned some 1950s phrases!

I would have bought two cars from this pretty little lady! 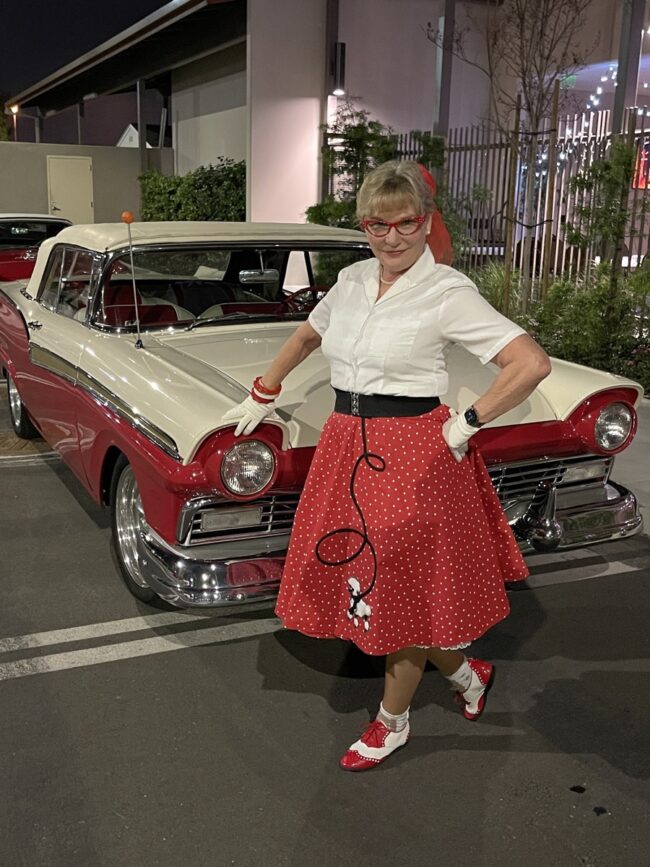 Mary should have sold cars!

We may have to buy one of these for the other 1950s dances we will go to!

Get Bent! – Disparaging remark as in “drop dead”
Get with it – Understand
Gig – Work, job (beatnik)
Go ape – Get very excited
Goof – Someone who makes mistakes
Goose it – Accelerate the car fully (greaser)
Greaser – A guy with tons of grease in his hair, which later came to describe an entire group of people. Yes, John Travolta in Grease.
Grody – Sloppy, messy or dirty 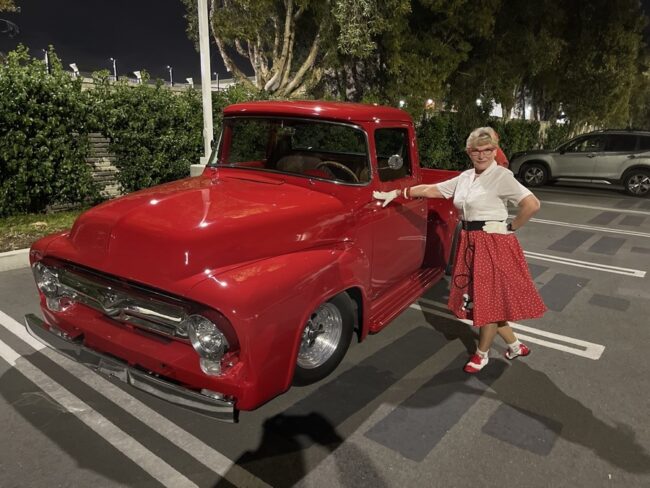 I picked up on the fins; beautiful fins. The photo below is a 1956 DeSoto. Check out my fins page on the 50s website. 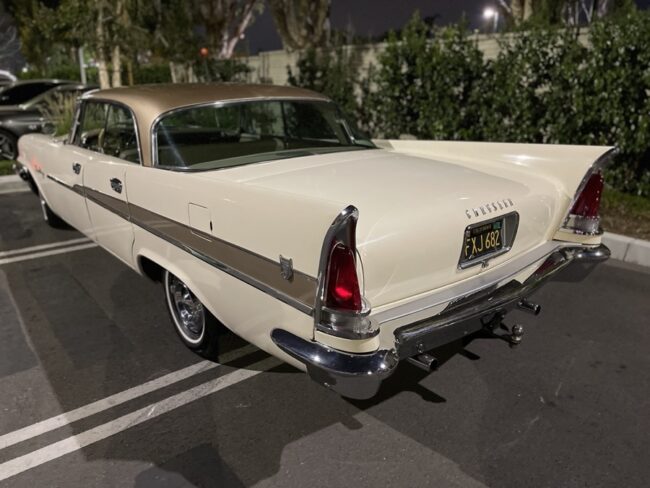 This was the year when Fins were in and the higher the fin, the better!

Tonight it was cold, so I had my letterman jacket on! I matched the car. 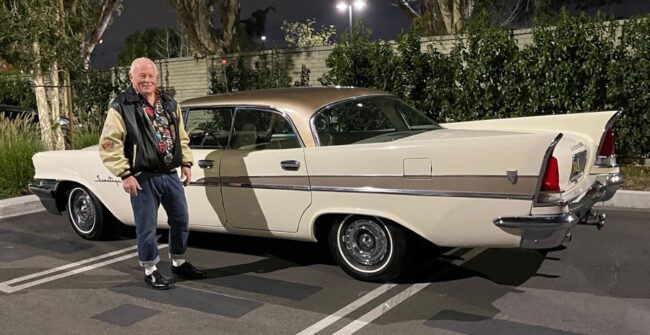 I have not seen a DeSoto in years!

One more picture! We laughed all night long; great fun with friends.

In the 1950s, I could walk into the grocery with a dime and walk out with a loaf of bread, half a gallon of milk, a dozen eggs, and a pound of hamburger. Nowadays they’ve got these newfangled cameras everywhere. 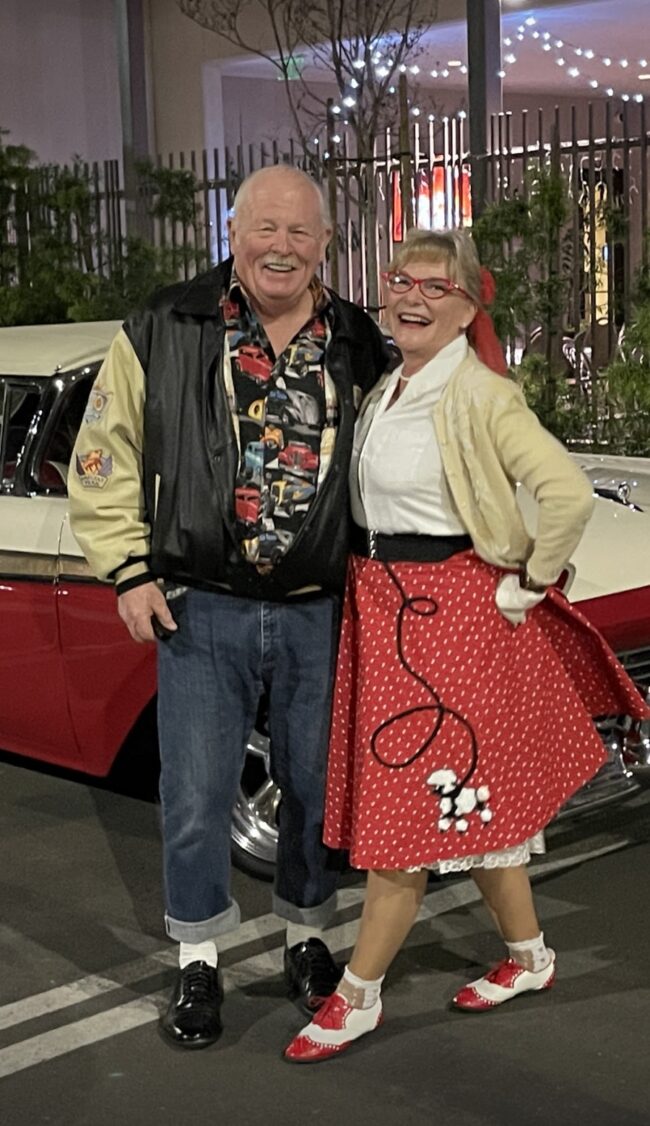 Back inside, Ronnie was DJ’ing up a storm. Ronnie played lots of rock and roll or swing music. We got him to play the Tenessee Waltz, circa 1950 by Patty Page. Mary got George up and dancing.

We had a great dinner of hamburgers and hotdogs.  We did not have the buns as we are attempting to lose weight.  It was definitely a 1950s meal.  I asked Mary, “How does a hamburger introduce his girlfriend?”  She was awaiting my typical smartass answer so I decided to surprise her by saying, ” Meat Patty”.

I could not resist so I also asked, “What does a redneck and a hamburger have in common?”  Without hesitation, Mary responded, “They’re both in bread.” 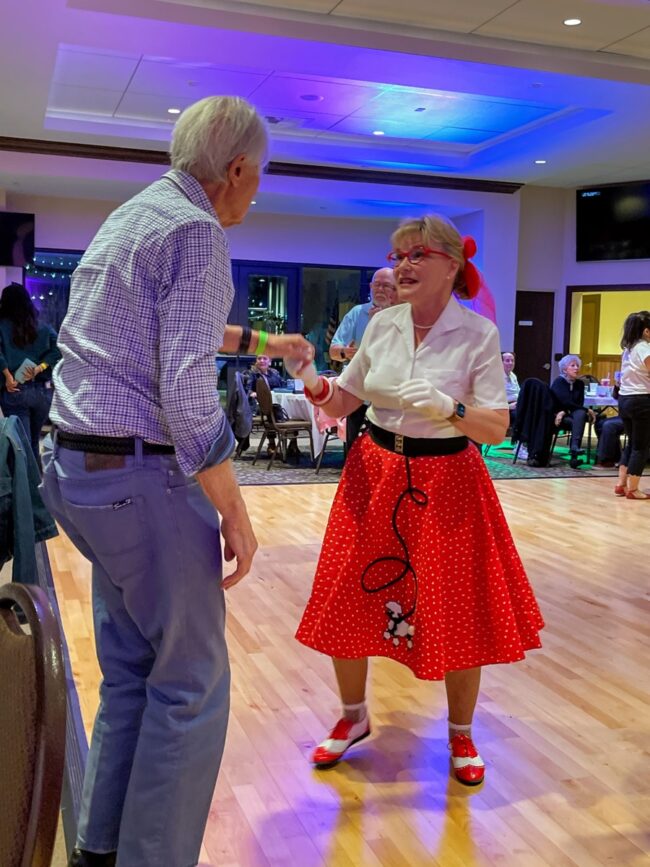 George and Mary hit the floor.

The twist was popular, and Beverly gives us a little demonstration of how it is done. 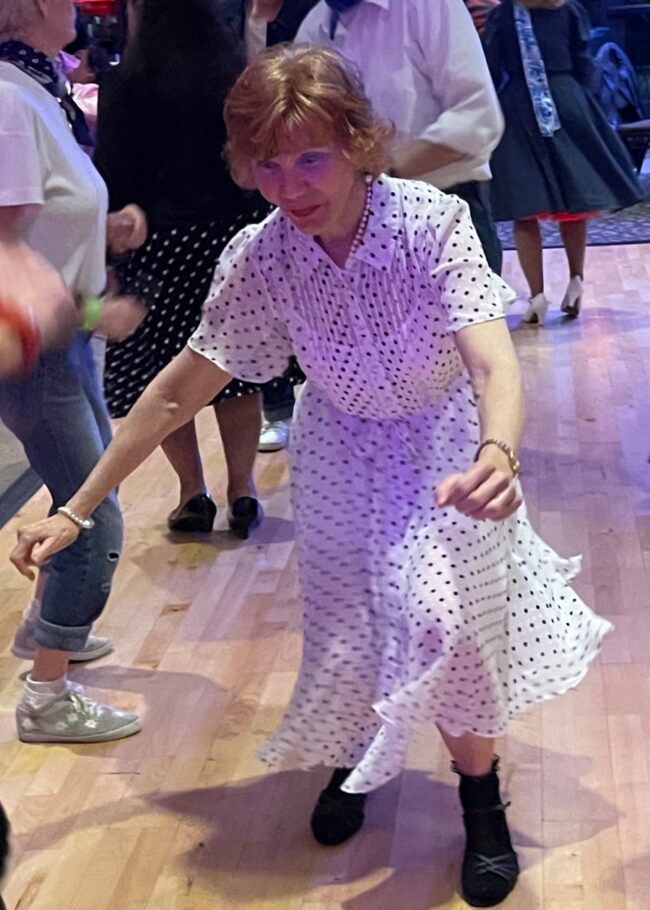 Did You Know? The twist is a dance that was inspired by rock and roll music. From 1959 to the early sixties, it became a worldwide dance craze, enjoying immense popularity while drawing controversies from critics who felt it was too provocative. It inspired dances such as the Jerk, the Pony, the Watusi, the Mashed Potato, the Monkey, and the Funky Chicken, but none were as popular.

Having seen teenagers in Tampa, Florida doing the dance, Hank Ballard wrote “The Twist,” which became the B-side of Hank Ballard and The Midnighters’ 1959 single “Teardrops on Your Letter.” Dick Clark, having noticed the dance becoming popular among teenagers, recommended to Cameo Records that the more wholesome Chubby Checker recorded the song, which was released in 1959 and became a number one hit in 1960. The dance became passé among teenagers as it became acceptable among adults, and the song was re-released, becoming a number one hit again in 1962.

I had difficulty seeing the dance steps, so Mary suggested I put on my new glasses. I wondered why everyone was staring at me. 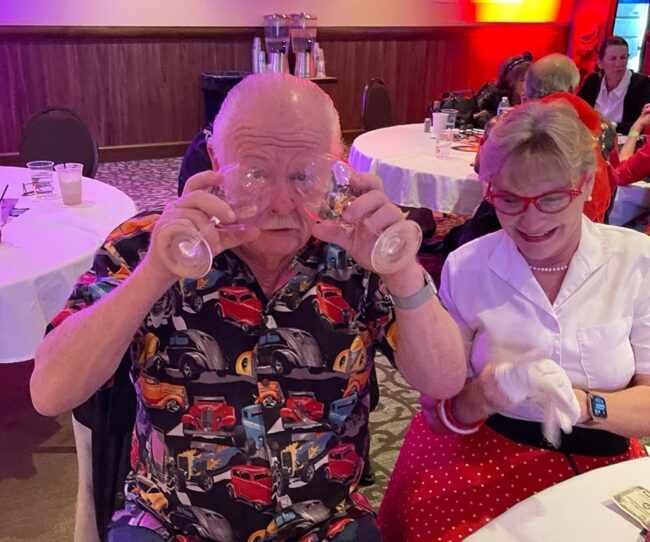 I wore my new glasses.

After two glasses of wine and a coke, I headed to the gentleman lounge, and as I was performing one of my magic tricks, someone pounded on the door and yelled, “Paul, come out, you and Mary are in a contest.” Say what? Yes, Mary and I were selected as one of the four “best dressed” couples. We had to go on stage and show our “outfits.” We came in second, but that was OK; it was fun! 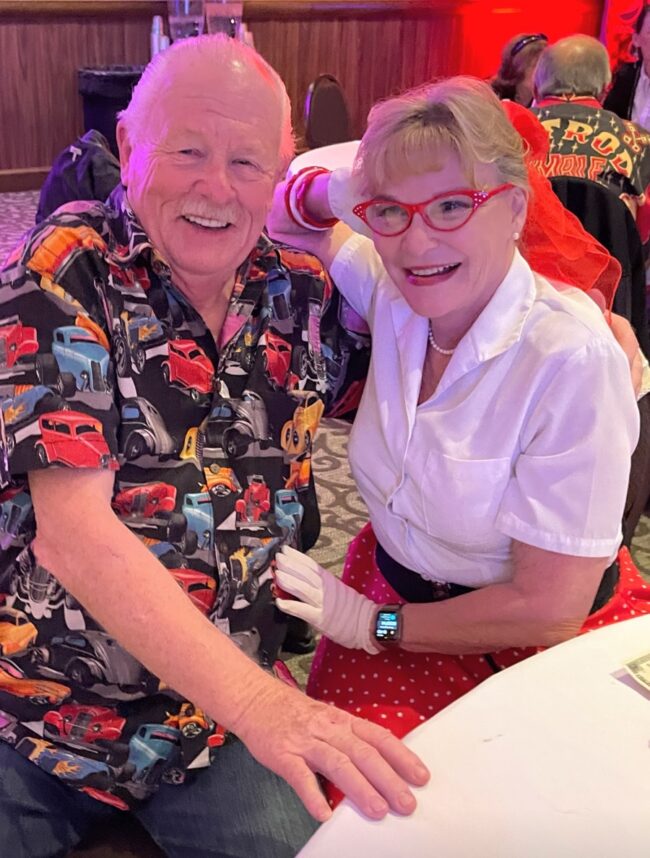 Love is in the air.

We had so much fun with our friends. The 1950s dance was terrific, and the burgers and hotdogs were as I remember. 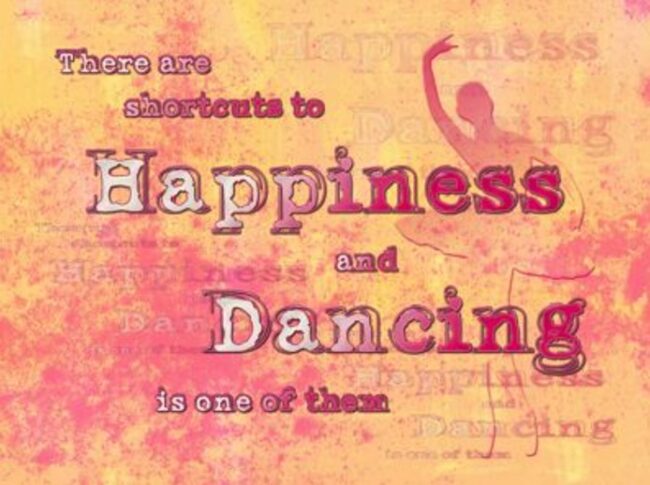 We danced until we dropped!

We departed about 9:30 PM as we had to water Scout, but on the way home, our minds worked in unison, and we said to each other, “Let’s stop at Aces (Bar & Grille).” We did; we took over the jukebox and met another couple. Incredible as it may seem, he could dance, and she could not.

Angel took our photos, so we had evidence of our late-night escapade! 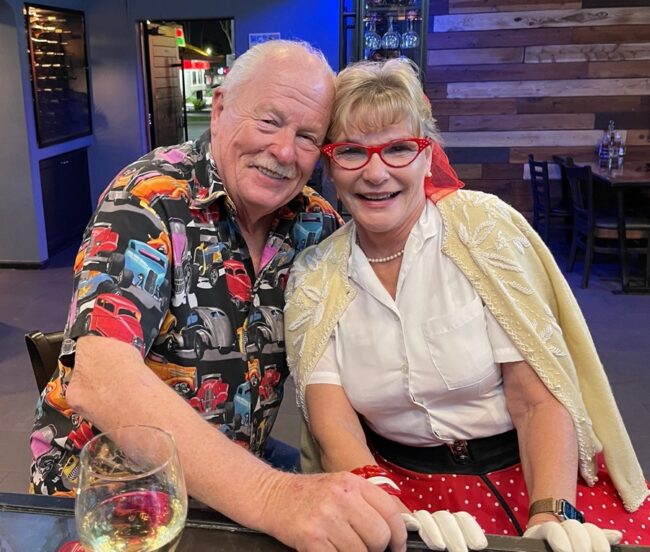 We are celebrating six months! 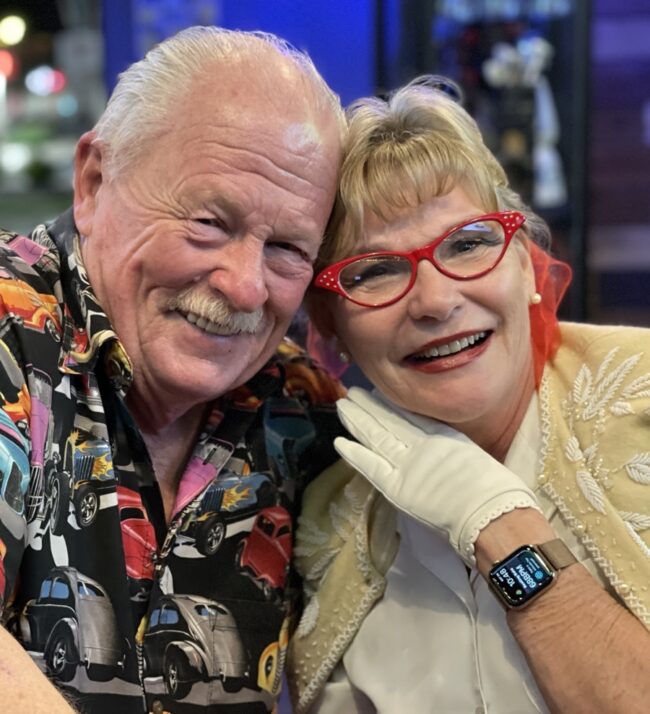 We danced for hours!

At home, we crashed. We both read a bit, and then the Sandman came to visit.

Did You Know? Since the Sandman didn’t sprinkle sleep sand on your eyes, how did that goop get there? It accumulates due to your eyelids and tears combining to become a carwash for your eyes.

When you close your eyes for a long night’s rest, they stay firmly closed. Your tears wash over your eyes as they move around during different sleep phases. The tears pick up dust, old eye cells, mucus, bacteria, and any other small foreign substances in your eye. The closed eyelids guide the goop that ends up in the corners of your eye near your nose and along your lash lines.

The same cleaning process happens throughout the day when you blink. However, during those hours, the goop doesn’t get a chance to accumulate, so you don’t notice any gunk. 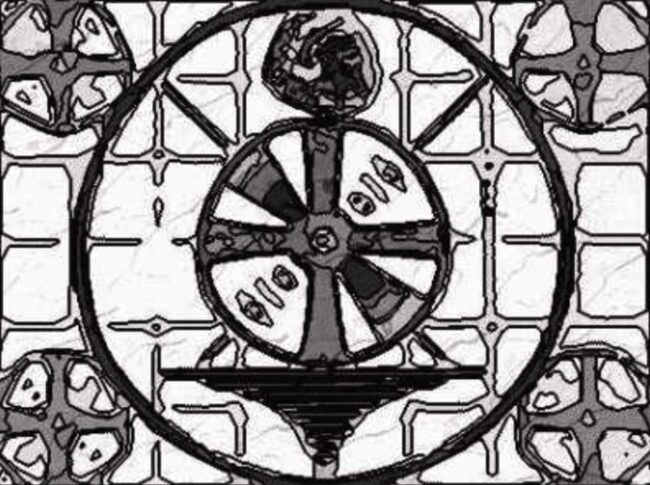 Just an old retired guy trying to finish out my last years on this planet. I lost my best friend and wife in early 2020. I was blessed again by reconnecting with Dr. Mary Côté, a long-time friend. Mary and I got married July 28th, 2021, and are enjoying life together and plan to spend the rest of our lives being a blessing to our friends and family.
View all posts by Paul →
This entry was posted in Dancing, Dining Out, Friends. Bookmark the permalink.