Fact: Spam is a mashup of the words “spice” and “ham.” – And not, as urban legend would say, Scientifically Processed Animal Matter. We stayed around the house all day! We just worked on getting things into shape. We spent several hours in the He Shed and She Shed, our two 120-square foot storage sheds out on the south forty. 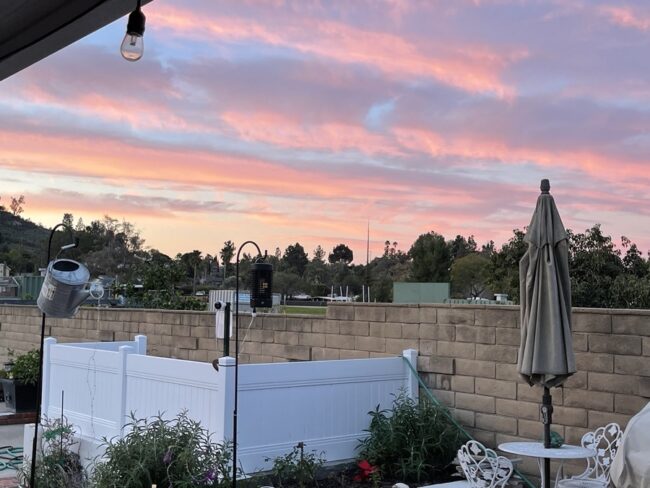 The morning sky was a beauty!

Mary was cooking again! This time it was potato soup, and it was terrific. I washed and chopped the potatoes and carrots while Mary did her magic. As we worked together, I mentioned that I saw an article in the local paper where a guy in our area was arrested last week for stealing cooking utensils. He was quoted as saying, “It was a whisk worth taking!”

The soup smelled terrific as it approached completion. We departed the kitchen and headed to the back yard where we have two large sheds.   I found a 100-foot hose in my shed, which Mary gave me for my birthday. I was waiting until we knew what we would do with the backyard.

I installed the roll-up hose on a swivel so I could wash off the patio and then water the plants along the wall with ease. 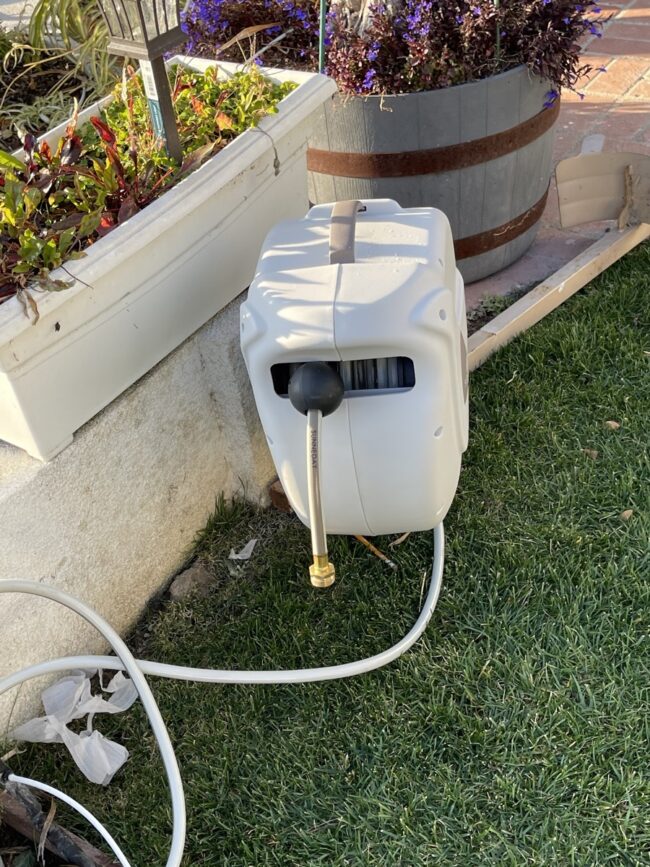 We marched hand-in-hand to the site of the He-She-Sheds.  We said a few prayers before opening the door.  It looked like a re-run of Fibber McGee’s Closet! 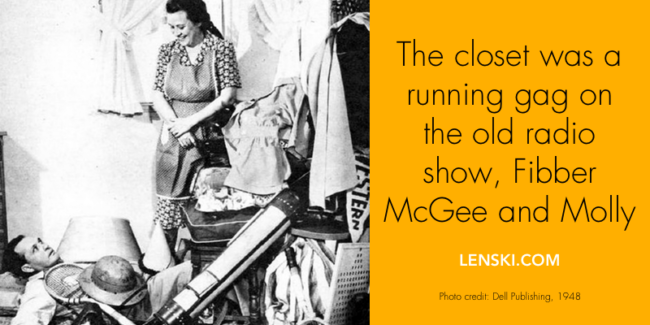 Long time radio show. You can hear it on OTR.COM

When comedy was really funny (and clean).

These are not exactly “closets” but they come close to what Fibber and Molly had going for twenty plus years. 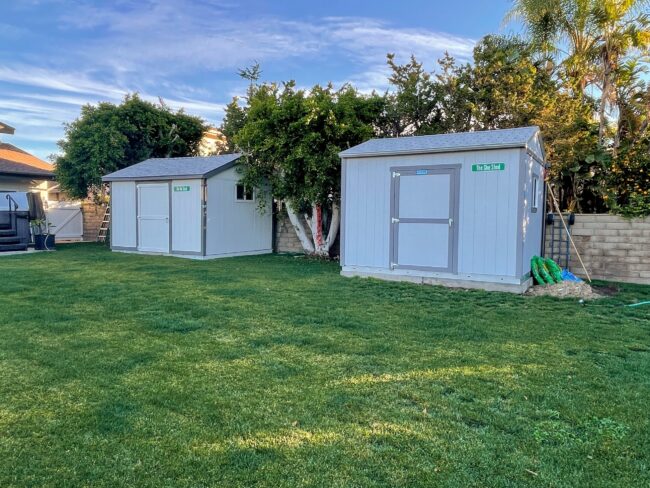 So nice and neat from the outside

Into the He Shed I over with visions of a clean shed in an hour. Whilst clearing out the shed, I found a box full of dead batteries. I’m giving them away free of charge.

I tossed out almost two trash cans full of “stuff.” Now I can walk inside and turn around. 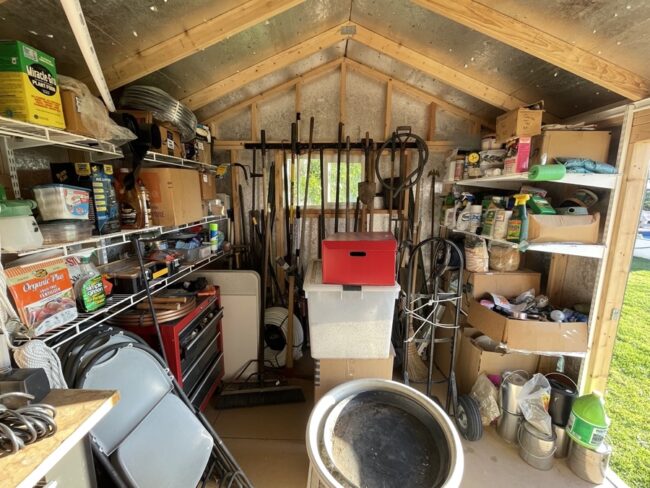 He Shed: Inside looking south.

It looks organized. While working, I asked Mary, “Where does Dracula keep his tools?” I finished by saying, “The bloodshed.” I need some long 2x4s to put things up above my head. 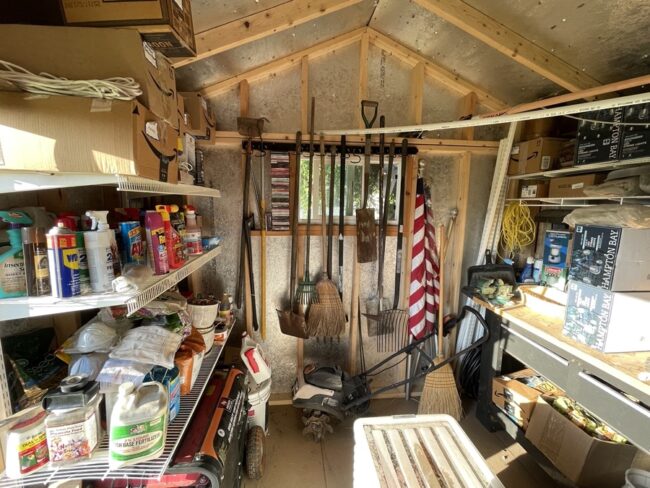 He Shed: Inside looking north.

Mary worked hard, and now she can almost get inside the She Shed. Scout watched the event unfold. We told him we made the Shed for him, but Scout won’t go inside. He says it doesn’t look stable. Mary did make a dent in her She-Shed, and we plan to continue the work perhaps on Friday; tomorrow is a lost cause. 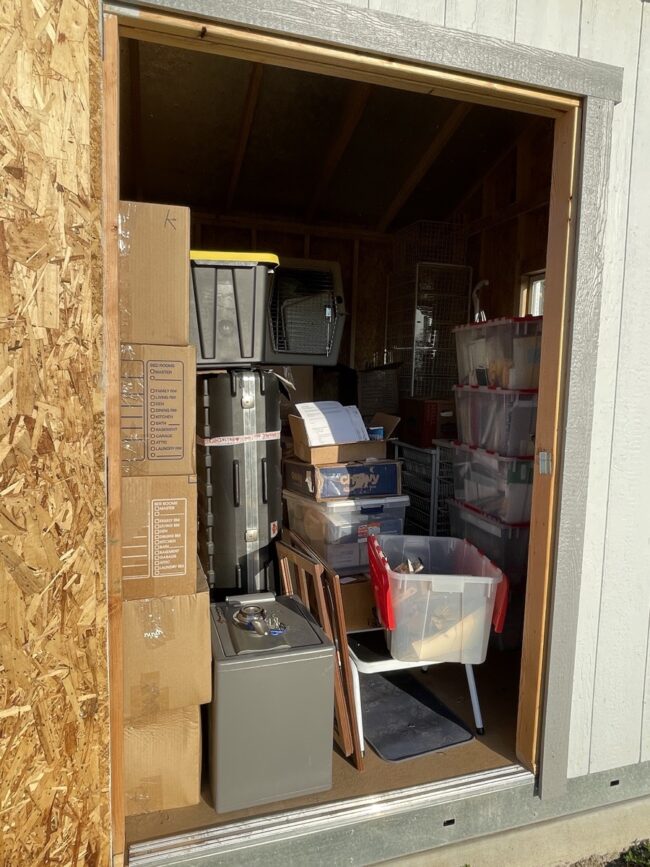 She Shed: Still can’t get inside!

Mary did ask for a bit of redesign of her She Shed; I listened carefully to her desires and found a little picture on the web that matches what she wants. 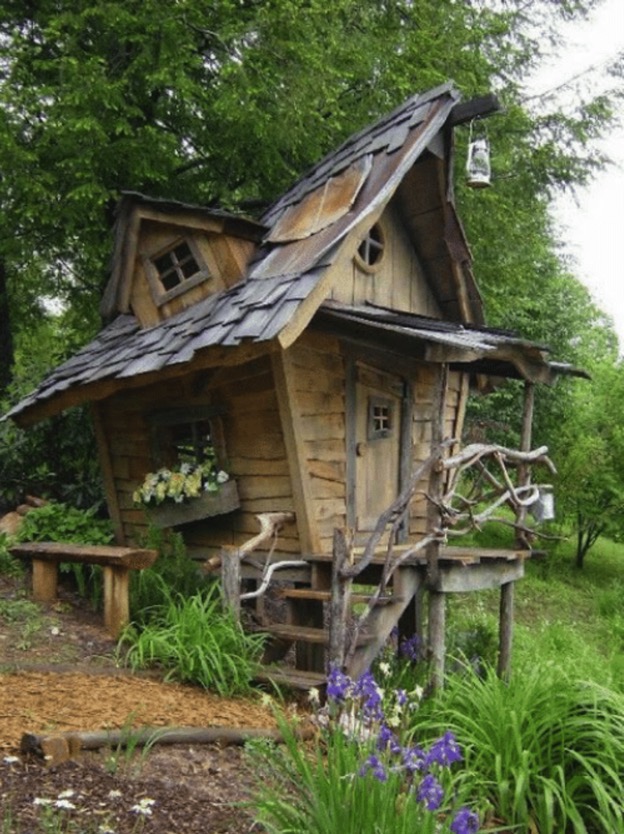 Doors must be so no one can take a picture inside.

South of the She-Shed is our orchard; I loosely use the word “our.” I hope when the neighbors get home and see that one side of the tree is picked clean, they do NOT get suspicious!

I have picked so many that I’m scared I’m turning orange. Hopefully, it’s just a pigment of my imagination! 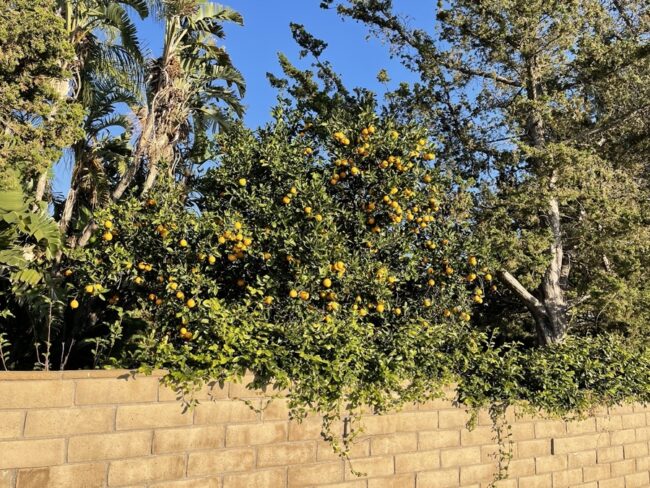 Our neighbors supply our citrus.

We planted about 100+ bulbs in the garden before Christmas, and they are beginning to come up; if all goes well, we ought to have a beautiful front yard. Mary asked me, “Why do flowers always drive so fast?” I knew she knew that I knew she knew the answer. Her response was, “They put the petal to the metal.” I provided a mini-giggle and shuffled off to visit our inside bulbs.

We won a set of bulbs at the Rondeliers dance. No, it was NOT for our dancing abilities. We sat closest to the exit, and that was the criteria. Nothing was showing when we got the plants, so I thought it was a joke. Three weeks later, they are getting pretty, and we enjoy them. 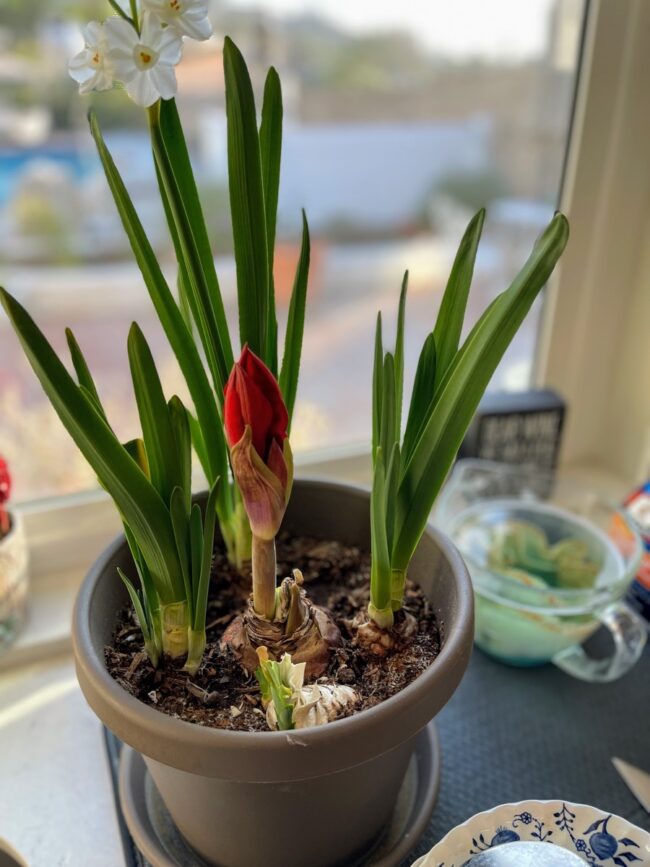 The term “bulb” is used by most people to refer to plants with underground, fleshy storage structures. … The definition of a bulb is any plant that stores its complete life cycle in an underground storage structure. Bulbs or bulb-like plants are usually perennials. They have a period of growth and flowering.

It was getting to be 4:00 PM, and the temperature was dropping, so we came inside to work. Mary went through her closet and found several hats that we will mail to BJ; she is another hat lover. I worked in my closet rearranging my shirts and grouping certain clothes together.

We had dinner around 5:00 PM, and the soup was out of this world good! I am a lucky man to have discovered Mary to be a beautiful, intelligent, caring woman who loves me and loves to cook.   We dined and called Robin, who is flying back tonight from Hawaii. We talked to Colleen and then spent 45 minutes on the phone with David. 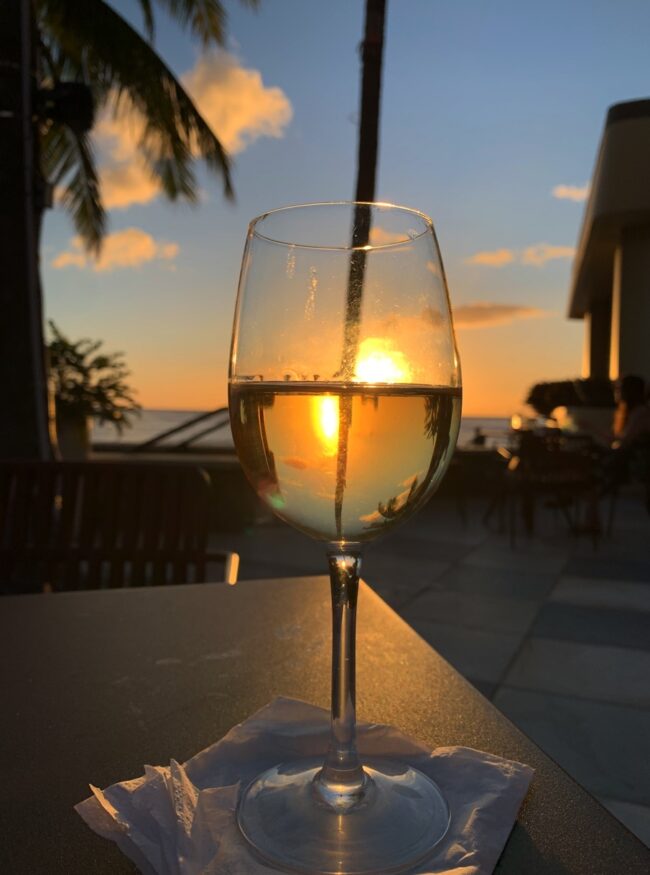 The last photo from Bob and Robin

After the phone calls, we decided to walk Five Miles. We gathered up our warm clothes, attached Scout The Wonder Dog to his lease, and off we went in a cloud of dust.  Returning home, Scout said, “Wake me up when it’s time for another walk.”

We headed for bed about 8:00 PM and watched an old 1953 movie entitled “Return To Paradise” with Gary Cooper. An American drifter comes to a remote Polynesian island controlled by a Puritanical missionary and turns the social life of the island upside-down.

We tried to watch another film by Gary Cooper, but we were getting sleepy. We decided to read for a while, and I used my new Kindle Whitepaper, and it is small but relatively easy to read. 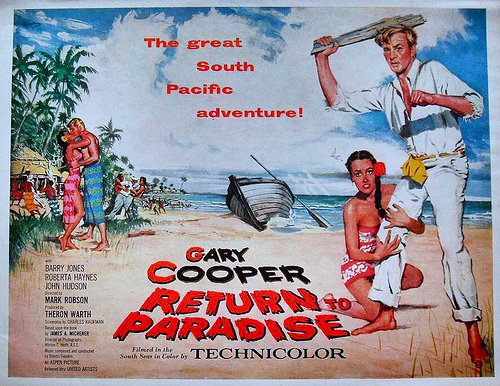 Good movie and enjoyable to watch since it is 70 years old!

Just an old retired guy trying to finish out my last years on this planet. I lost my best friend and wife in early 2020. I was blessed again by reconnecting with Dr. Mary Côté, a long-time friend. Mary and I got married July 28th, 2021, and are enjoying life together and plan to spend the rest of our lives being a blessing to our friends and family.
View all posts by Paul →
This entry was posted in Cooking, Just Us, Working Around House. Bookmark the permalink.