Fact: The fastest gust of wind ever recorded on Earth was 253 miles per hour. – Hang on to your hats because this isn’t your average wind storm. In 1996, a tropical cyclone named Olivia hit off Barrow Island, Australia, with such a force that it broke an incredible record. According to The Weather Channel, “Olivia’s eyewall produced five extreme three-second wind gusts, the peak of which was a 253 mph gust,” which blew past the previous wind record of 231 mph set in Mount Washington, New Hampshire, back in 1934.

Why this specific fact, you ask; it was WINDY all night long and all day today! The wind was whistling around the house, and we found various chairs and table covers in or around the pool! I saw the neighbor pick up his newspaper and could not stop it from flying away in the wind? I yelled across the street, “Use a news anchor!”

We worked in the office for a while and I finally finished off my redesign of the “50s website“.  I got a refreshed in CSS and Dreamweaver, it was needed! 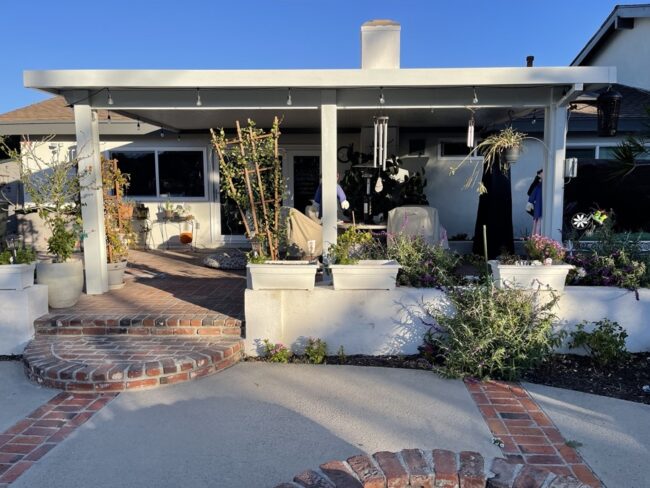 We were happy the plants didn’t get blown away!

It was so windy; it reminded me of the three drunks on top of the Empire State Building!

Three drunkards are standing on top of the Empire State Building.

The first one says to the other two, “You know, it’s a funny thing about these wind currents. A person could jump off of this building right now and not even hit the ground; the wind would carry him right back up to the top of the building!”

The first drunk jumps off of the building, and the wind carries him right back up to the top!

The second drunk says, “Let me try!” So the second drunk leaps off the building and promptly falls to the street below, landing with a hideous SPLAT!

The first drunk smiles, clearly amused. The third drunk looks at him and says, “You know, Superman, you can be a real Jerk When you’re drunk!”

The pool guy will have his work cut out for him on Monday! 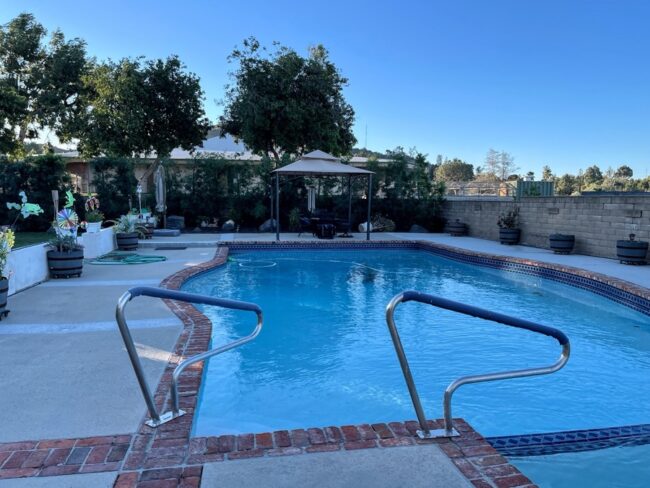 The winds are still going strong; the gazebo is bolted down to the cement!

We did some cleanup, and Scout, the Wonder Dog, came to help!  It was funny to watched him protect our property from the neighbor’s gardener.  We had to bring him inside because he was barking so much his tongue was dragging on the grass.

I do talk to Scout and today he told me a joke.  He barked, “What did Darth Vader’s dog say to Luke’s dog?”  I was slow in answering as I have to translate dog to english.  Finally Scout said, “Come on! Join the bark side.” 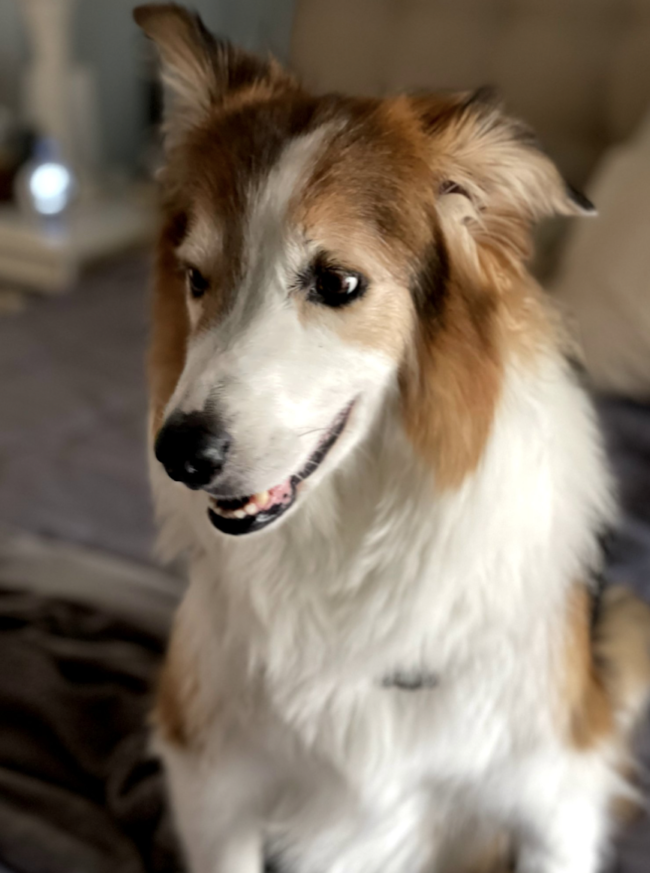 Mary did the roses in the front yard, and it took both of us to put the car cover back on the van! We filled a 90-gallon trash can with rose clippings. 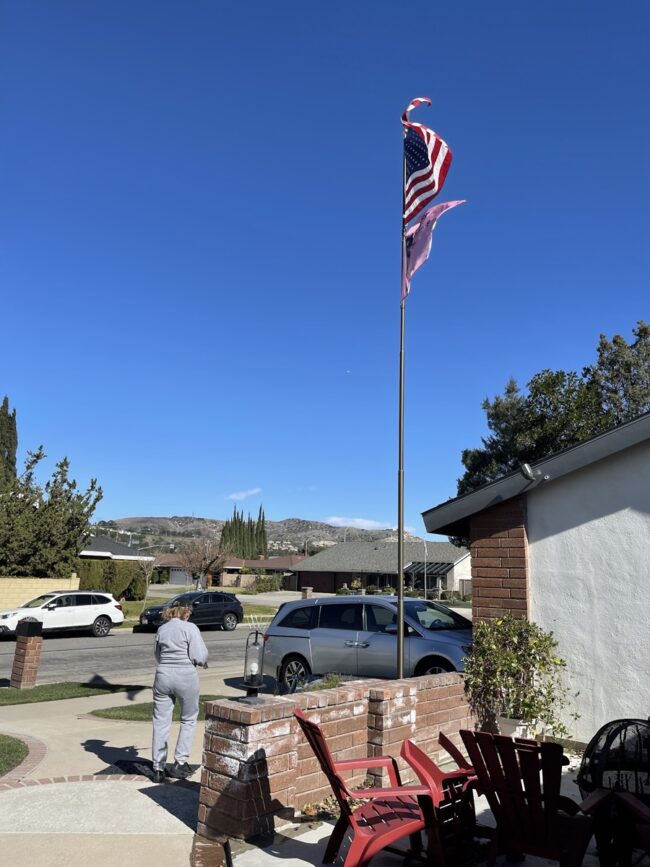 We worked in the front yard!

You can see our colors flying high. 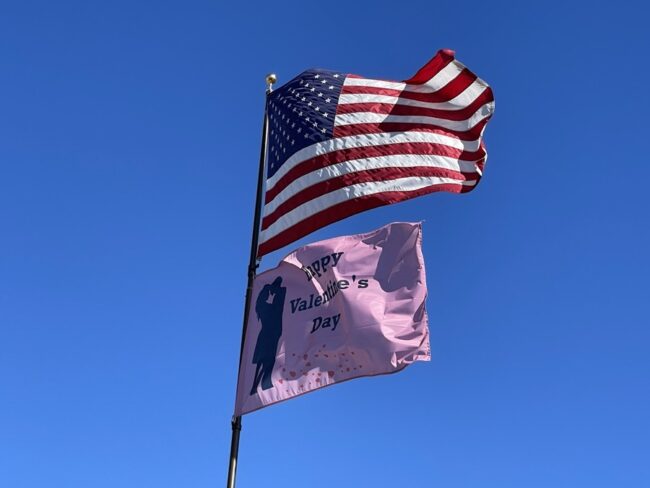 Out colors were flying strong.

We got cleaned up as Nick was coming over about 2:00 PM; he finally made it at 2:30 PM, and we decided to go to a new steak house called Prime Cut. It was 4.6 miles from our home and located on Katella (halfway to Disneyland). 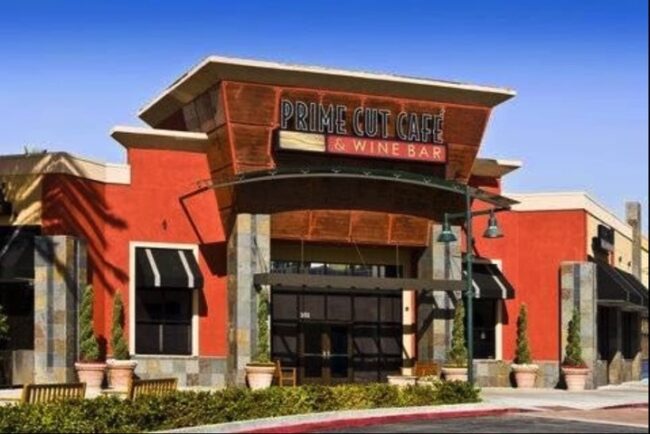 Mary and Nick did the filet mignon, and I opted for Steak Diabe Steak Diane, a dish of a pan-fried beefsteak with a sauce made from seasoned pan juices, generally prepared in restaurants tableside and sometimes flambéed. It was probably invented in London or New York in the 1930s.

I told Nick and Mary, “The only thing that occurs when dragons get bored with strip steaks is a flaming yawn.”

The waitress asked, “How do you find the steak, sir?” and I replied, “very easily, mam, just to the side of the potatoes.” 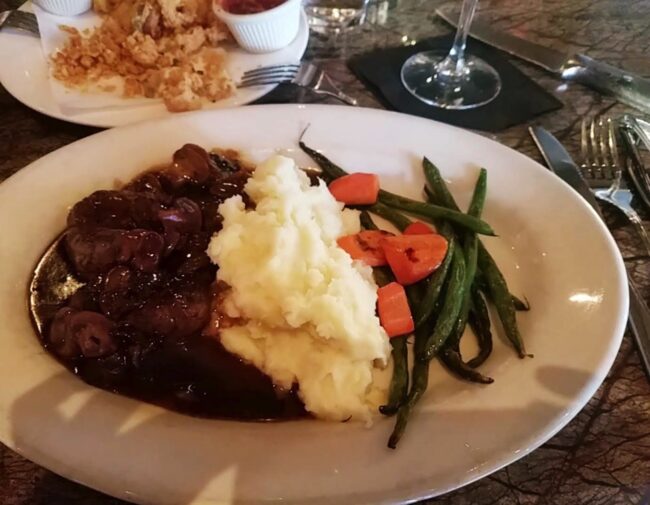 My steak was superb!

We plan to go there again; mid-afternoon is a good time to go. We returned home, and Nick set sail for home and a visit from his Aunt.

We stayed home the rest of the day.   We watched a movie called “Geronimo,” which was excellent but sad. We read until it was time to kill the lights and look for the sandman. As I dozed off, I thought to myself, the difference between light and hard is that you can sleep with a light on.

Just an old retired guy trying to finish out my last years on this planet. I lost my best friend and wife in early 2020. I was blessed again by reconnecting with Dr. Mary Côté, a long-time friend. Mary and I got married July 28th, 2021, and are enjoying life together and plan to spend the rest of our lives being a blessing to our friends and family.
View all posts by Paul →
This entry was posted in Dining Out, Family, Working Around House. Bookmark the permalink.