Poor Scout, his little ears got infected, and he was up at 2:00 AM crying and scratching.  Mary gave him Benadryl, and that calmed him down a bit.  As soon as Mary departed for work, I found the Orange VCA Hospital that would take Scout at 10:30 AM, so we raced over there for a look-see.

Before I departed, I checked with the mason, and he was doing well!  He will return Monday and begin the stacking of the stones! 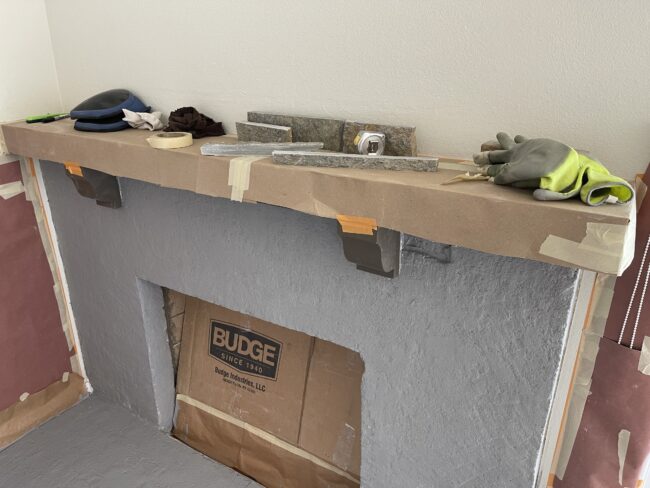 The wall is now complete and ready to receive the cement and stones!

We are pretty happy with him as he left no mess even though it was a messy job to remove the old plaster. 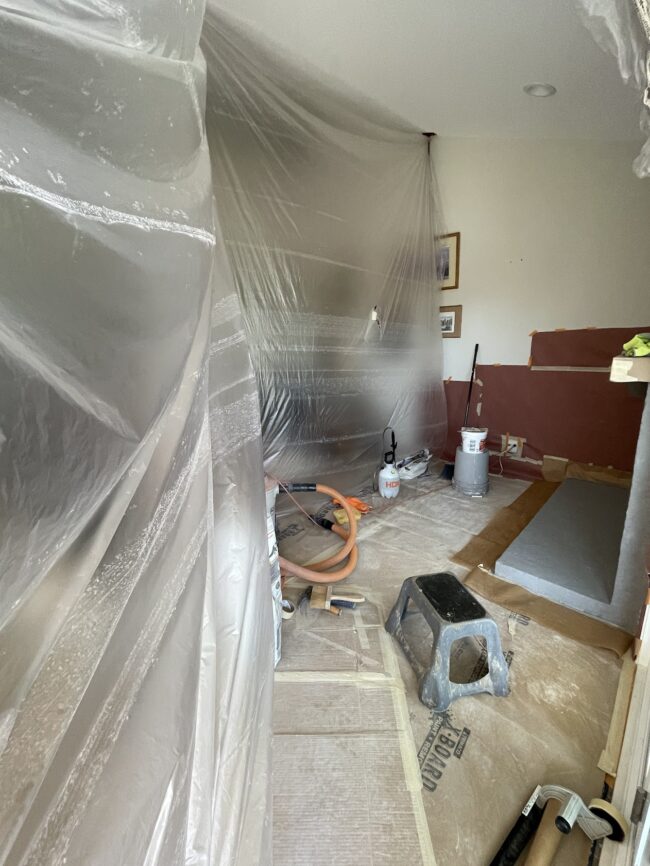 The place was spotless at the end of the day.

Scout and I mounted The Silver Fox for the four-mile trip to VCA Orange on the west side of the traffic circle.  We got right in, and Scout was a trooper!

After the exam, the doc said it was definitely inflamed and likely an infection.  She took samples to send to the lab to get an exact answer. The doc said it would take an hour, so I went to a local Mexican restaurant called Bahia and had a burrito and a margarita! He got three shots and would be resting all afternoon peacefully. 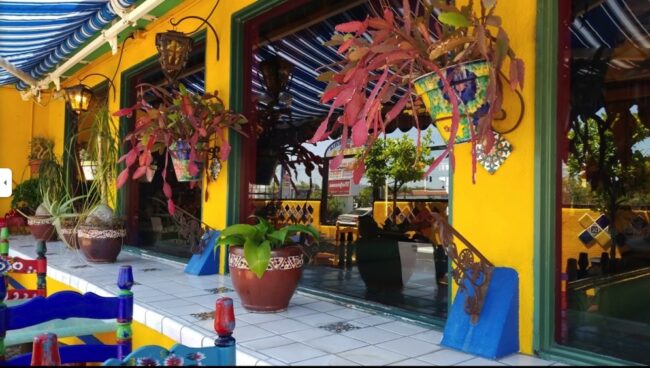 The whole restaurant was nicely decorated!

A text message arrived saying the baby was ready and what a good doggie he was; he made friends with the entire staff! I jumped in The Silver Fox, turned on the hydraulics, and made the car bounce up and down, and we hopped out of the parking lot, attracting quite a following of locals asking, “Who is that masked Gringo?”

We arrived home, and Scout assumed his position at the front door, guarding it against the Huns and other invading groups!  We wondered why the FedEx, UPS, and mailman came to our door wearing chain-mail! 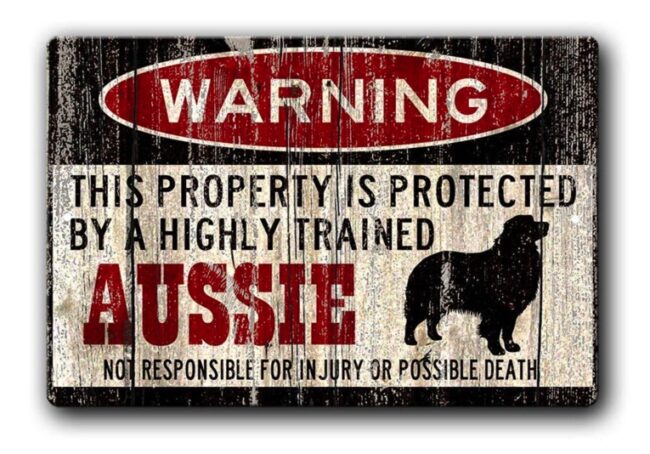 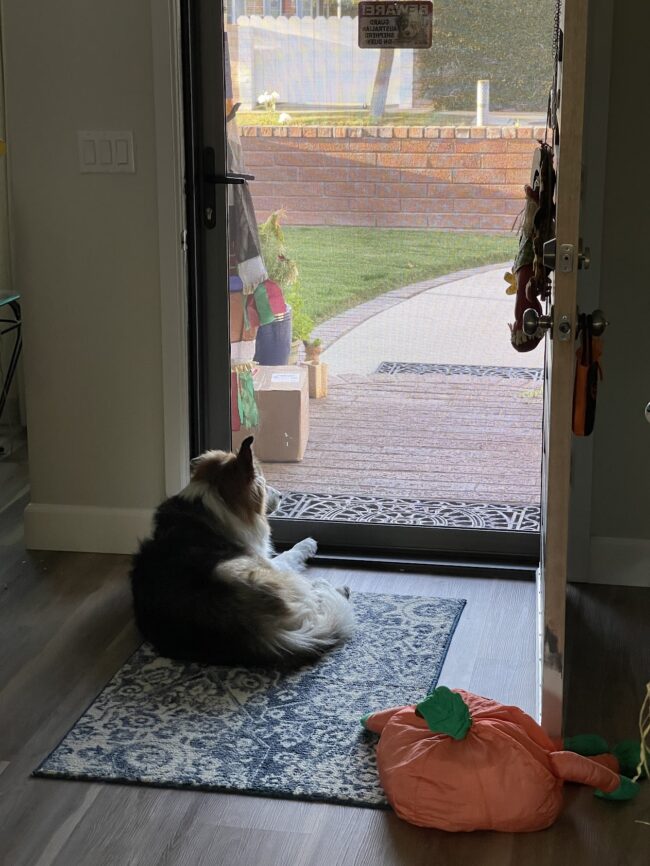 Scout greets the invaders with his trademark blood-curdling howl, which, BTW, makes the local Coyotes run and hide!

All of a sudden, the invader alarm went off. It was the UPS driver who had a package in one hand and four pounds of raw steak in the other while carrying a white flag in his teeth! Scout was barking and shattered several crystal goblets in the China Closet.

It was Colleen’s recommended “Halloween Tree,” which I ordered while she was here. 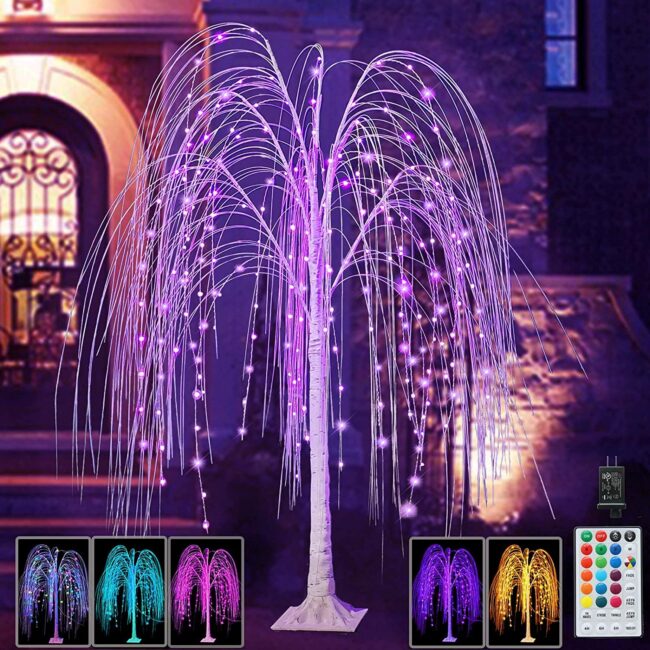 It is suitable for all the holidays! Halloween, Thanksgiving, Christmas, Valentines, St Patrick, and Independence Days!

The UPS guy also had a delivery from eBay, another twenty-foot-long eyeball garland for the holiday tree. Garland is a funny word, so I looked it up. From the French guirlande, itself from the Italian ghirlanda, a braid. 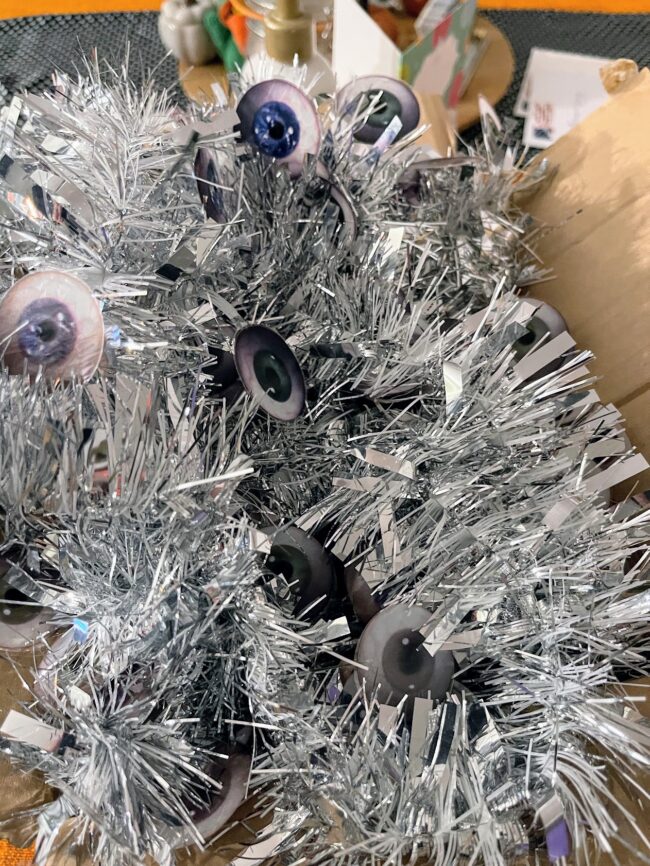 I found some more eyeball garland for the holiday tree! Now we can complete the bottom of the tree!

Colleen spent almost three weeks here and she pitched right in, which we appreciated.  But, she did some wash and folded the sheets and put them away remarking, “I learned how to do it via YouTube”!  Well, I am old and wise so I went ahead and folded everything.  When I put the sheets away I noticed a distinct difference.  Hers were half the size of mine!  I assumed she ran over the folded sheets with an 18-wheeler!  This will require a phone call to Colleen to learn the secrets! 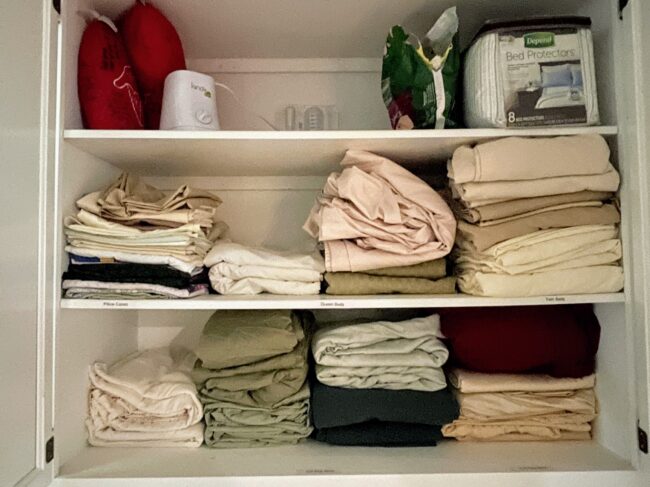 Can you tell which one I folded?

Yesterday at dusk, we put Robin in charge of the watering can decoration. Well, it was a watering can and some fairy lights put together.  The idea came from Miss Vicky; it looks pretty good! 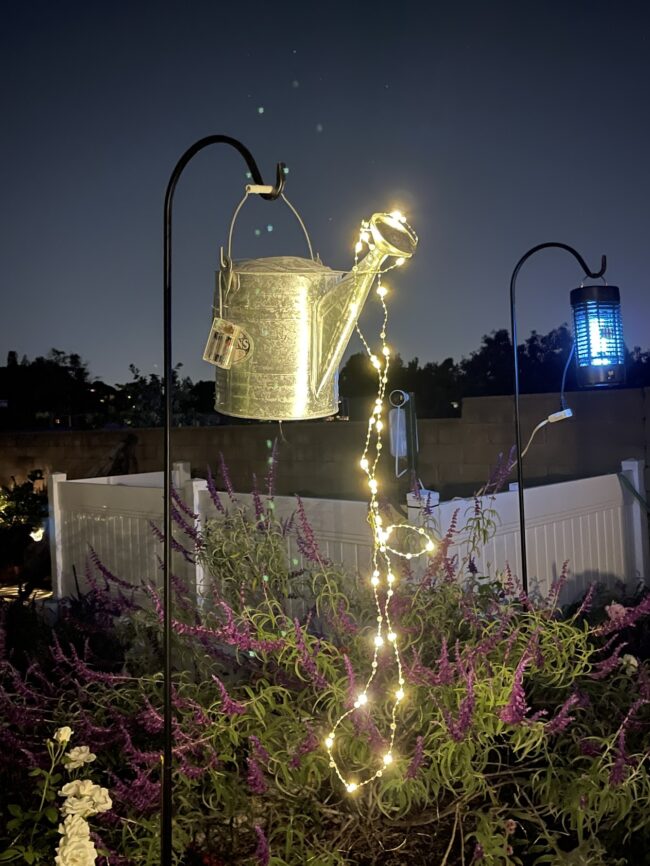 I admit I stole the idea from Vicky!

The meds Scout had earlier were working.  He was not digging at his ears, and he was mellow; we even had a delivery without seeing the guys leave running for his truck! 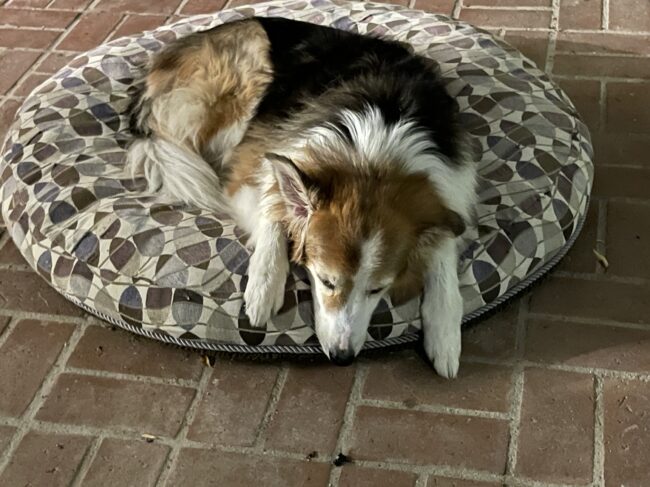 Scout is back to normal, the meds worked, and he had a great night!

We decided to visit Jan, and we stopped by her favorite fast food place. The three of us killed off a bottle of Two-Buck-Chuck, our favorite. We also got a salmon bowl and a steak bowl for us. We enjoyed visiting Jan as the three of us laughed and giggled the whole time.

I admit, I did ask Jan, “What is a witch’s favourite class?”  Not getting a rapid response,I said, ” Spelling”.  I was expected to follow that one up and I did, “What do skeletons say before they begin dining? Bone appetite!”

Returning home, I bedazzled Dr. Mary with the myriad of lighting choices we have on the Halloween Tree. We played with the colors for quite a while! Point the remote at the receiver to control the lights, pick up your favorite color, speed to fit your eyes, set timer to save energy, the lighting mode to flash/strobe/fade, and more. 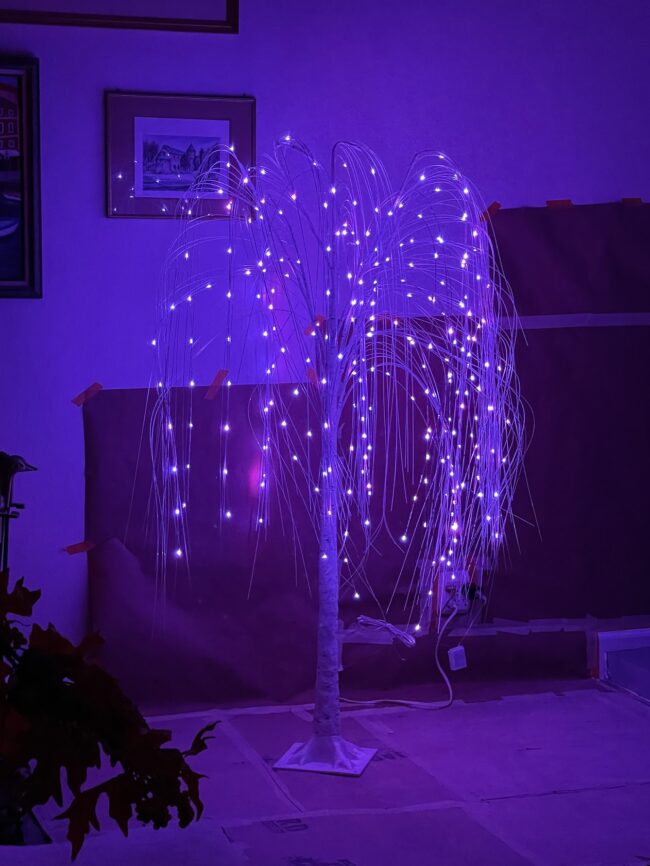 By 9:00 PM, we were done for the day!  We opted out of the hot tub tonight and decided a good movie would be excellent.  Well, I lasted about two minutes before I was out, and Mary stayed up and watched an entire film.

Tomorrow we will work in the office and take it easy because we see dancing in our future.

Just an old retired guy trying to finish out my last years on this planet. I lost my best friend and wife in early 2020. I was blessed again by reconnecting with Dr. Mary Côté, a long-time friend. Mary and I got married July 28th, 2021, and are enjoying life together and plan to spend the rest of our lives being a blessing to our friends and family.
View all posts by Paul →
This entry was posted in Friends, Working Around House. Bookmark the permalink.