I never thought this day would come figuring I would leave this world in the Los Alamitos home but alas, here I am on my way to a new chapter in my life, and I am doing it with a smile on my face and joy in my heart. I remembered a quote from Walt Disney:

Off to Los Alamitos and this time alone; Mary was pooped out, and she had to meet Luisa at 11:00 AM, so it did not make sense to drive to Los Alamitos and stay 90 minutes and return so she opted to stay home and so some work around the house while Bob and I watch the packers/movers.

The packers/moved arrived right on time, and they worked until 1:00 PM when two trucks took off with the goods.  Ortega Movers are super. 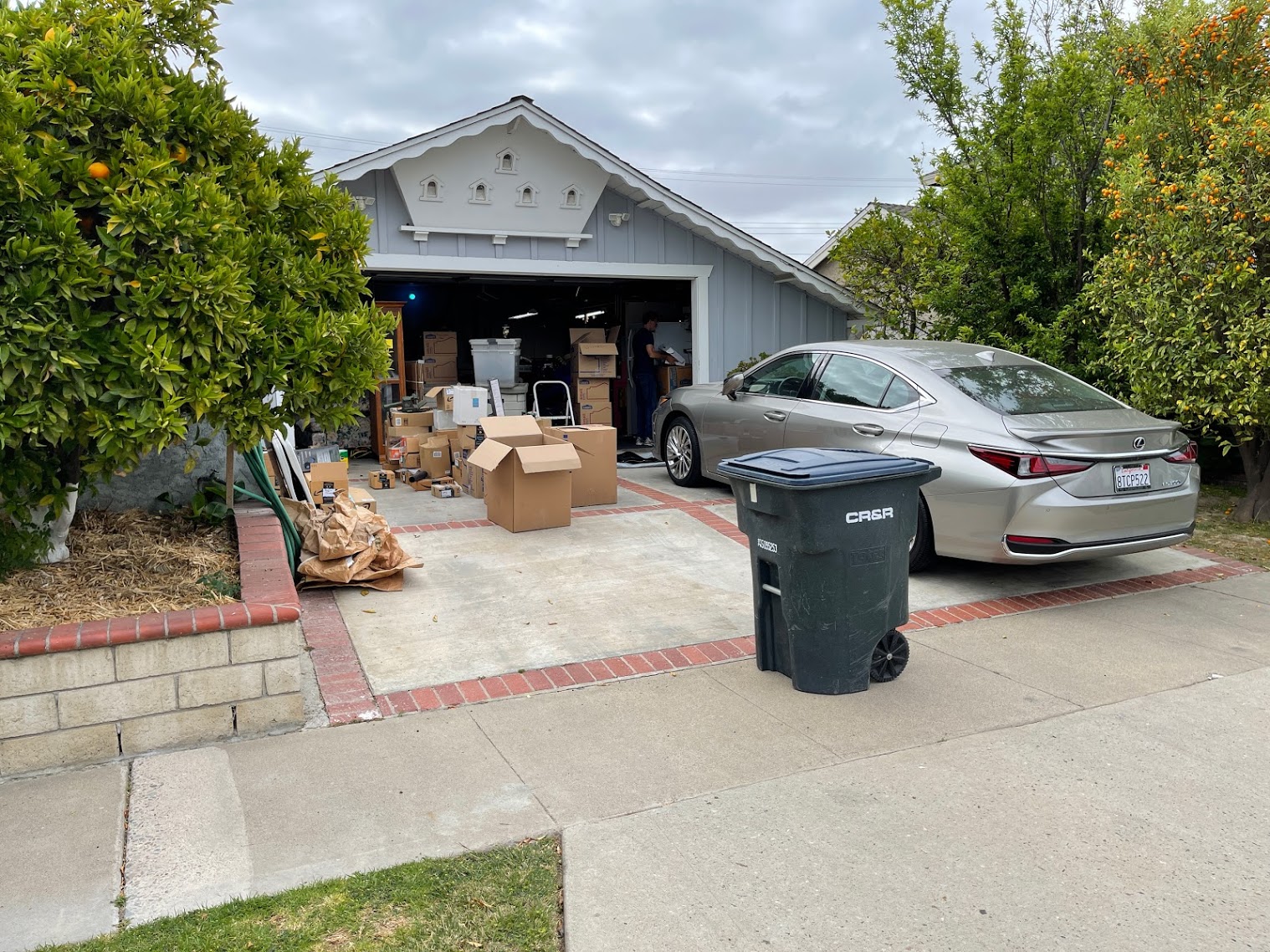 The rooms began to look like skeletons when the contents were removed.  It was almost haunting! The office had the Container Store systems where I could place books and even have a desk for all the computer stuff.  All the hardware is coming with me, and we will figure out what we will use. 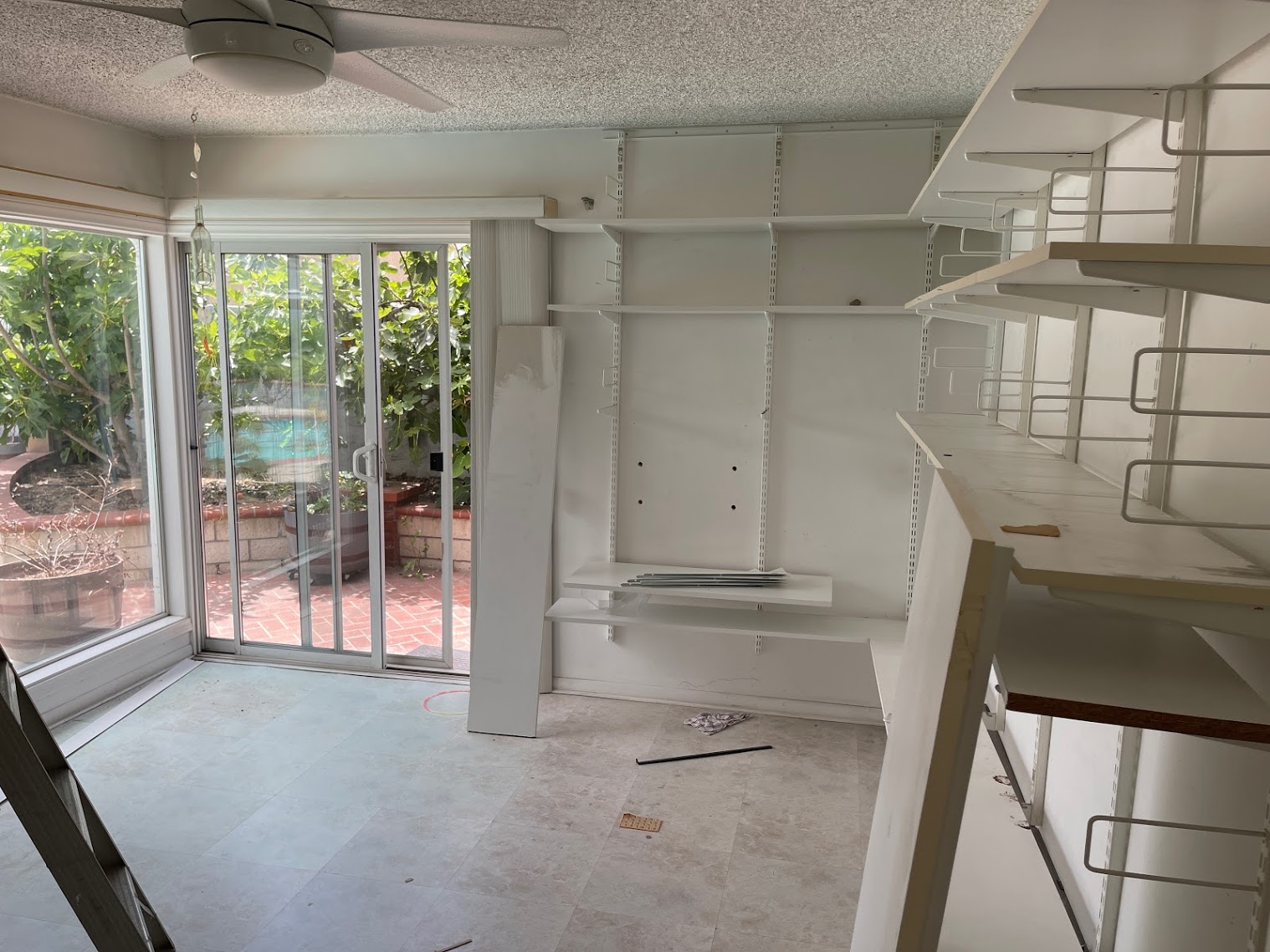 The office will never be the same!

The kitchen had the most “stuff,” and the den is loaded with kitchen boxes in the new place.  I will attempt to start tomorrow setting up the kitchen, but I plan to let Mary make the final arrangements; after all, she will be the primary user.  I will have to downsize a bit because I had so many duplicate items.  The Salvation Army will be happy with the results, I am sure. 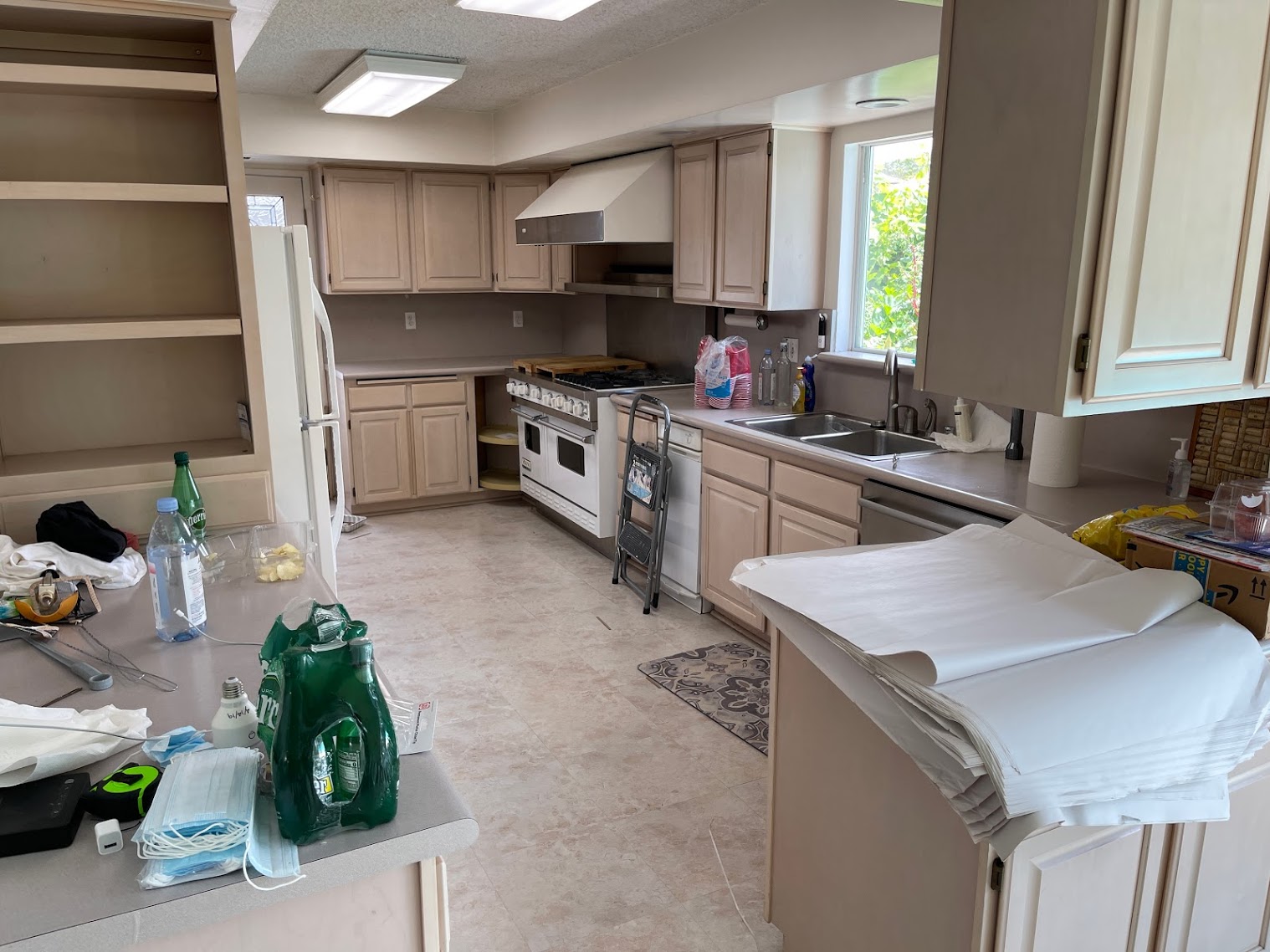 30+ years of wonderful meals came from this little kitchen!

We filled this entire truck and three others with “stuff.”  OMG, where did it all come from?  Thirty-five years of accumulating things, and this was after I did a serious elimination of stuff last year. 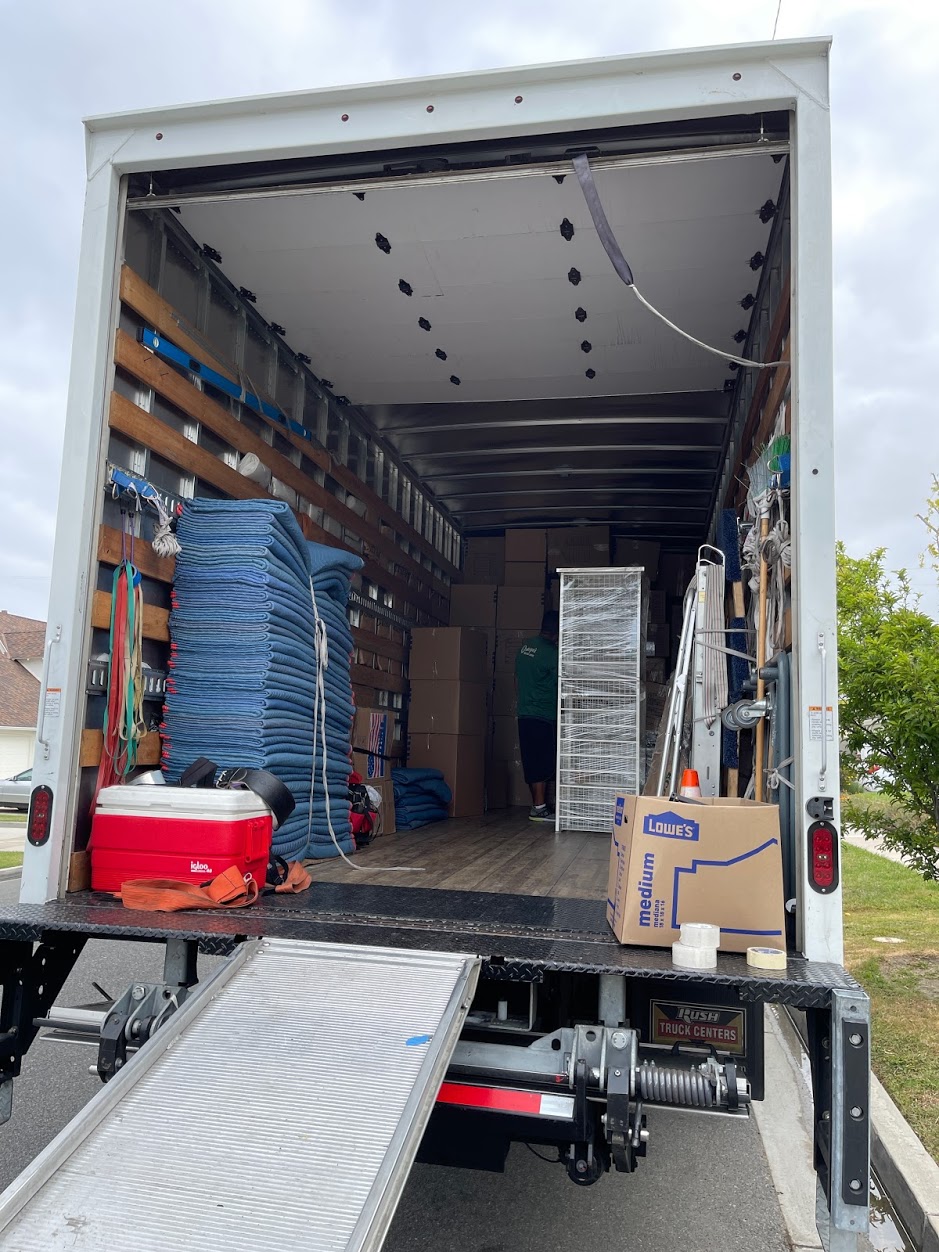 We filled it to the top!

What will I miss the most?  The fruit trees and garden, but as soon as the escrow closes, I plan to have the garden started and new fruit trees added to our property. We will go with an orange, tangerine, lemon, grapefruit, plum, and apple. 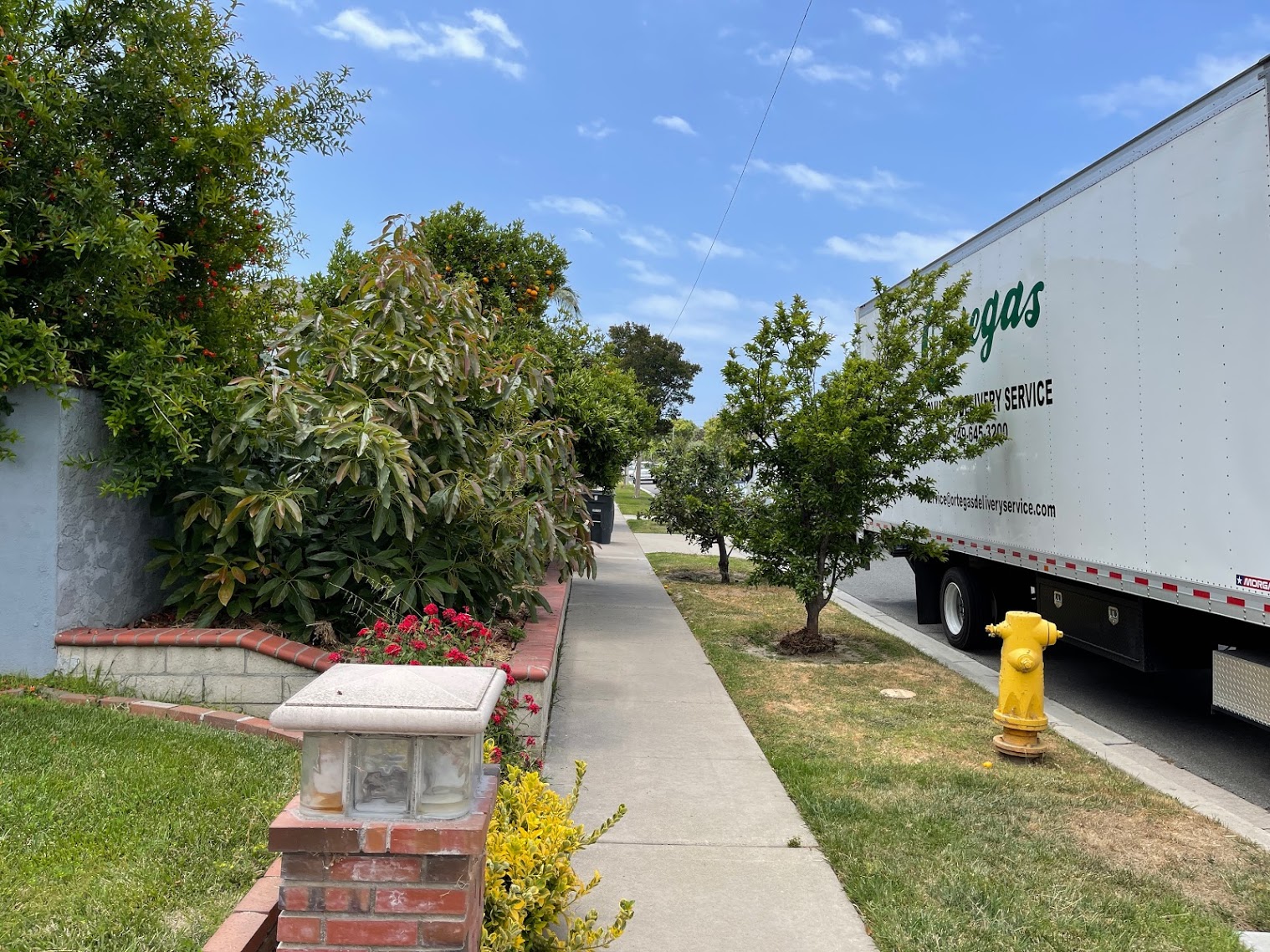 They pulled up right in front!

At 1:00 PM there were done and on the way to Casa Valencia, but alas, we could not fit the garage or yard items in the two trucks, so they had to find two additional trucks and another crew to finish off everything today.  My best friend Bob saved the day when he offered to go back to the house and supervised the loading of the next two trucks plus detach the dishwasher and unload the two refrigerators. 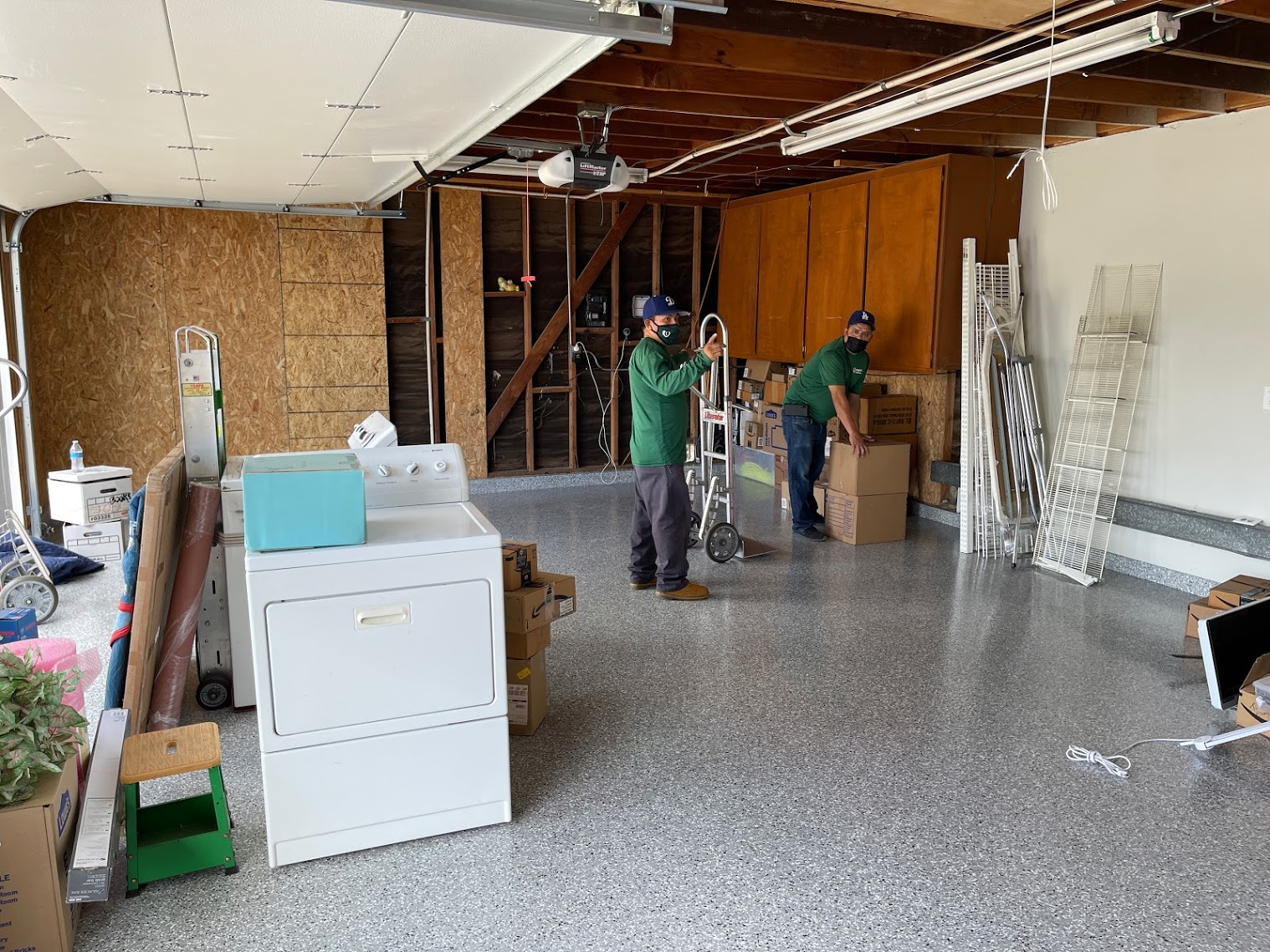 It will be a daunting task to unload all these boxes, but we have time and the inclination!  I hope we will be cooking late next week, late next week.

We did a switcharoo and traded dishwashers from the old house.  Casa Valencia had a new Samsung while Los Alamitos had a Braun.  I checked the Consumer Reports website, and the Samsung rated in the 60s where the Braun was in the 90s.   We also took both my refrigerators and the washer/dryer.  The moving guys had their hands full.

We did pretty good at labeling things, although Mary thought my labeling talents were a little limited. 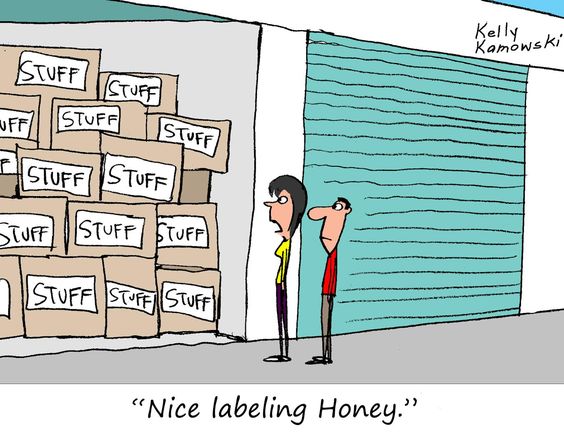 They got to the new place about 2:00 PM after a well-deserved lunch! Unloading began, and as advised, our time in labeling things saved the day.

At 3:00 PM, they dispatched another truck to pick up the garage contents and plants/gardening goodies plus the dishwasher and refrigerators. 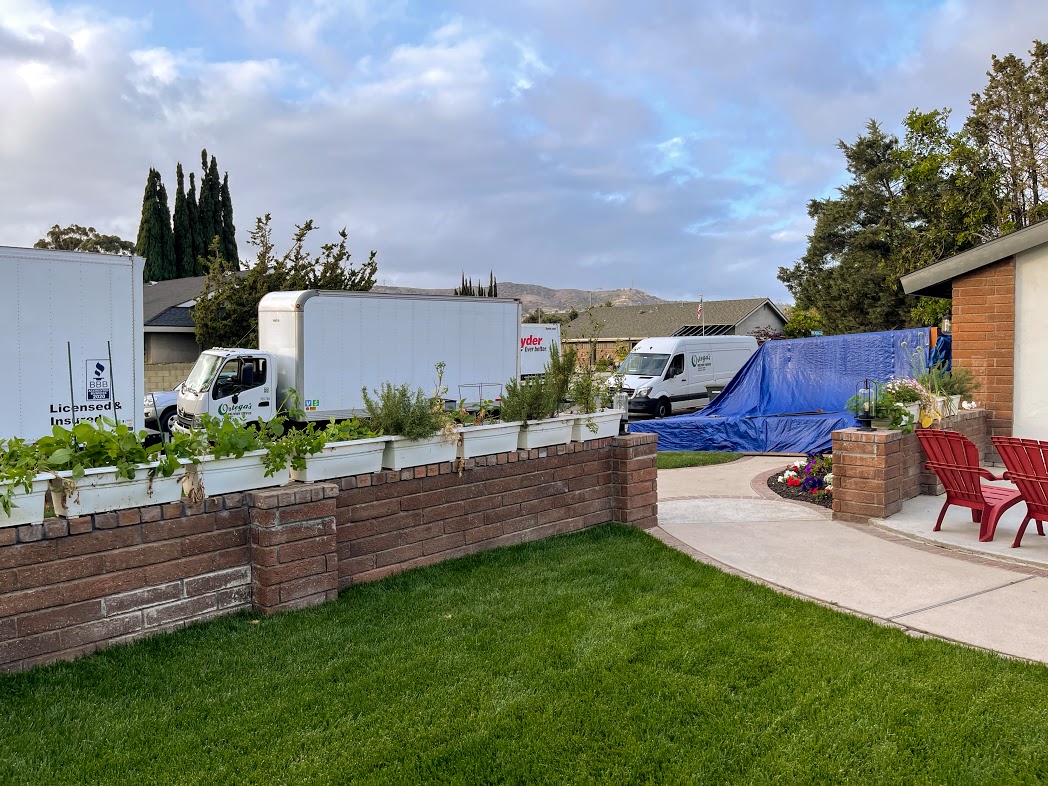 Four moving vans/trucks and eleven moves all descended on Casa Valencia, and they worked until 6:00 PM.

I had to take my yard swing, and I thought they would disassemble it.  The truck had enough room where the movers brought the entire swing in one piece.  The crew chief asked where it goes, probably hoping I would say, “The front yard.” 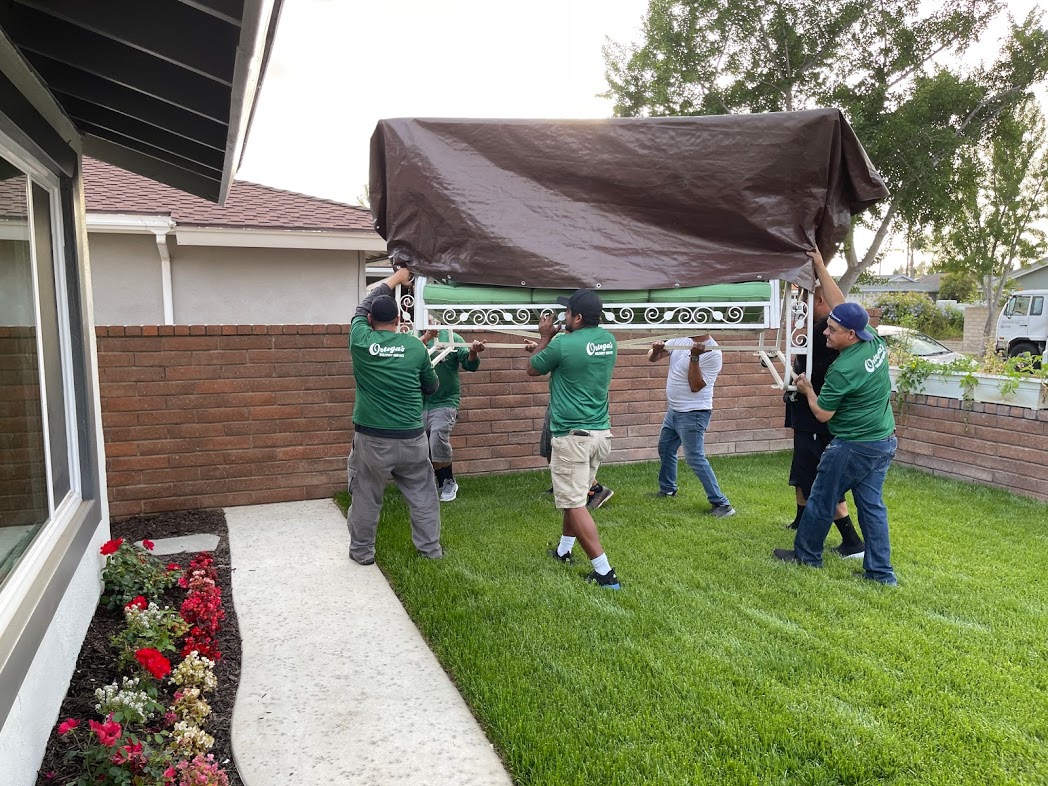 Seven men made it look like a piece of cake!

Well, I said, “It goes in the back yard,” and off it went. Eight guys lifted that puppy into the air and took it down the side of the house.  It was amazing to watch. 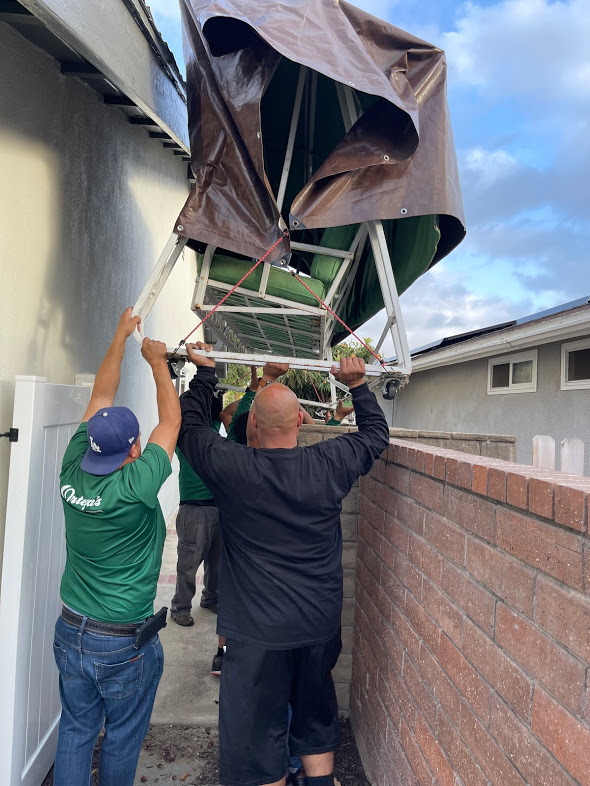 It looked easy from my vantage point.

Then came the five outside storage cabinets loaded with vital stuff.  Mary hurried me out of their way fearfully that the Rubbermaid container would fall off the back of the truck! 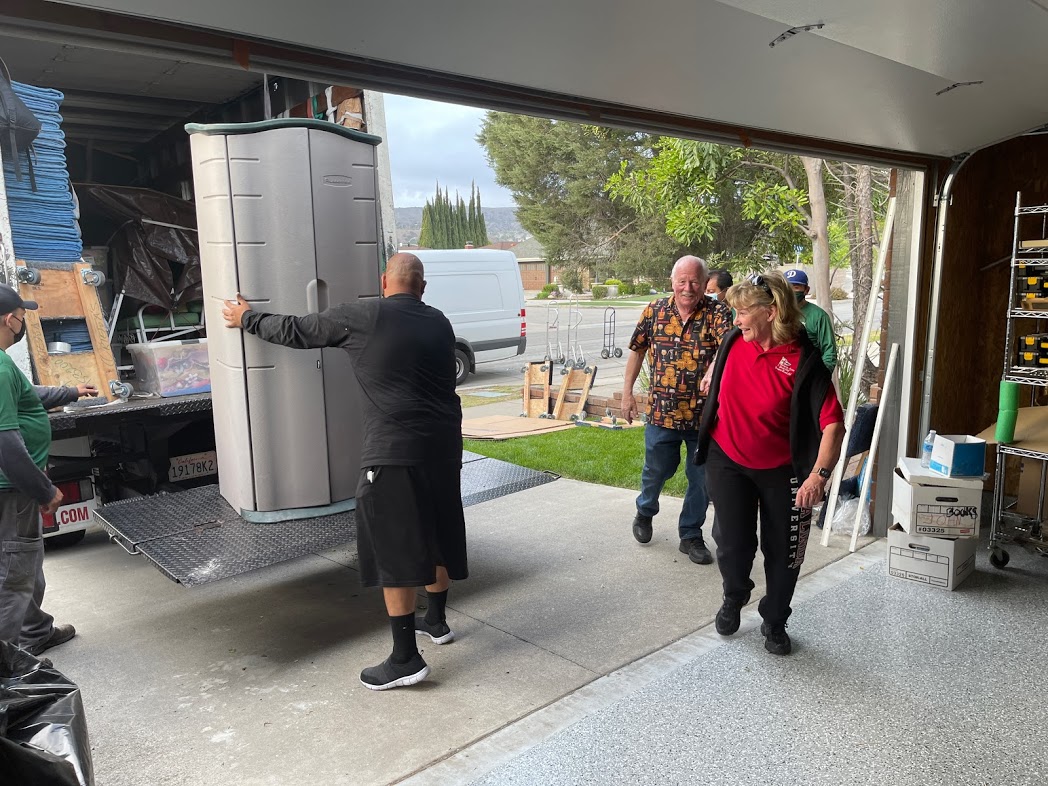 “Out of the way, dear, it looks unsafe!”

As soon as the truck was unloading the refrigerators, Bob scampered to his truck and brought the food they contained.  Mary and Bob packed the refrigerators and got them plugged-in quickly. 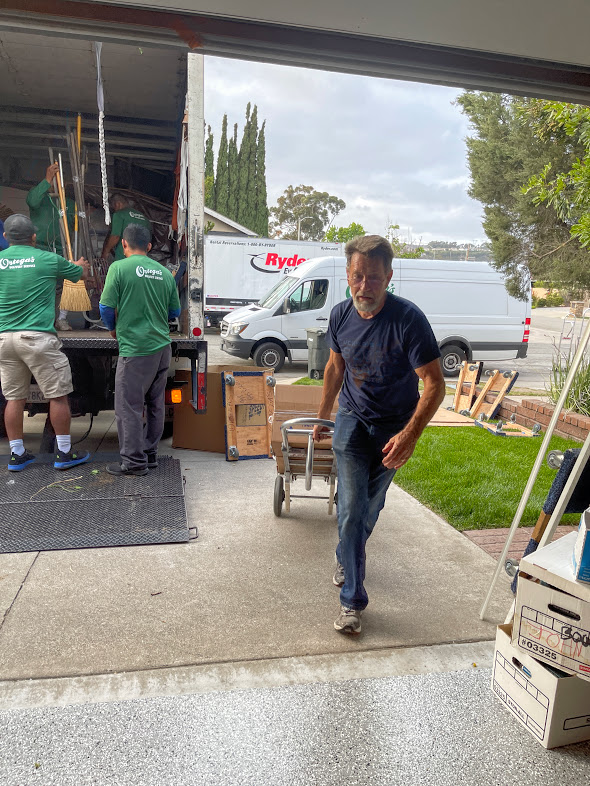 Bob to the rescue…This may be our dinner tonight!

It looked like a Chinese fire drill as bodies were moving every which way, placing the boxes/tools in their locations.  They moved my old workbench and all the gardening tools to the shed in the backyard. 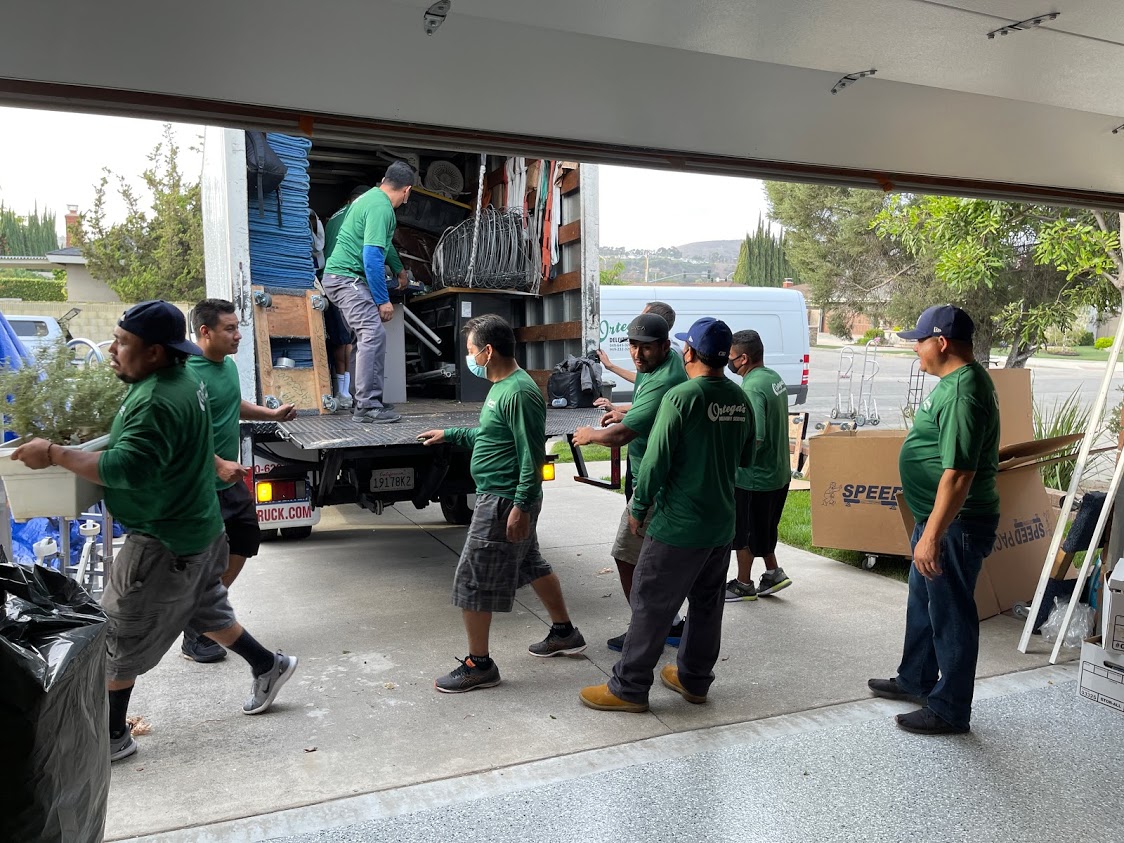 The neighbors may have thought it was St. Patrick’s Day with all the guys dressed in green!

I need to say that my best friend Bob Z. was a lifesaver.  He stayed the entire day, made a panic trip back to Los Alamitos to meet with the second and third trucks, and supervised the appliance and yard moves.  We would be still in two houses if it had not been for his heroic efforts.  I feel blessed to have Bob in my life, and I hope I can return his kindness in some way over the next two decades (we both plan to torment our ladies for another twenty years).

After everyone departed, Mary and I opened a bottle of wine and just sat down to unwind.  It was a hectic day for all of us.  Tomorrow the organizing and unpacking begin. 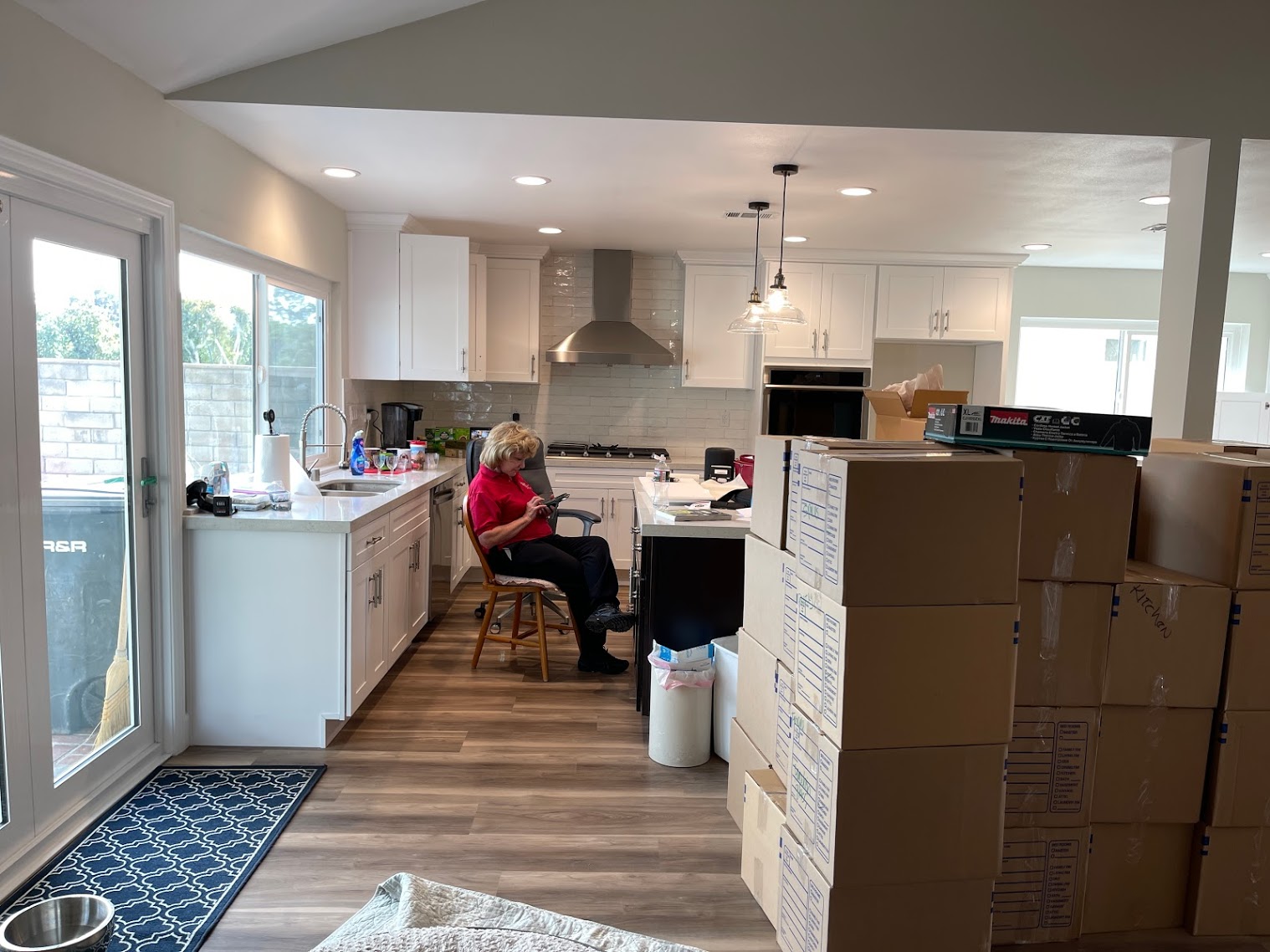 Mary wonders what she is getting into!?

After our wine, we went home to Mary’s, only 1.1 miles up the road, and jumped into the hot tub!

Just an old retired guy trying to finish out my last years on this planet. I lost my best friend and wife in early 2020. I am involved seriously with a long-time friend, Mary, and life goes on.
View all posts by Paul →
This entry was posted in Adventures, Working Around House. Bookmark the permalink.