Sunday Was Slow But That’s Needed Once In A While!

“The pain passes, but the beauty remains.” – Pierre Auguste Renoir

We simply enjoyed each other’s company and spent hours and hours just talking to each other about “stuff”. Food and wines were a favorite topic, then add the garden and family to the mix, and we had hours of subject matter.

I miss those last afternoons as we decided where to dance on specific evenings, where to go to lunch the next day, and of course which activity to plan.  Museums, gardens, train rides, zoos, day trips, the tramway, everything was on the table.  Holding her soft hands is something else I totally miss.  The occasional squeeze and of course the “elbow in the ribs”, an indication of me being “bad”, seems like a long time ago.

You are missed my dear, more than you will ever know! 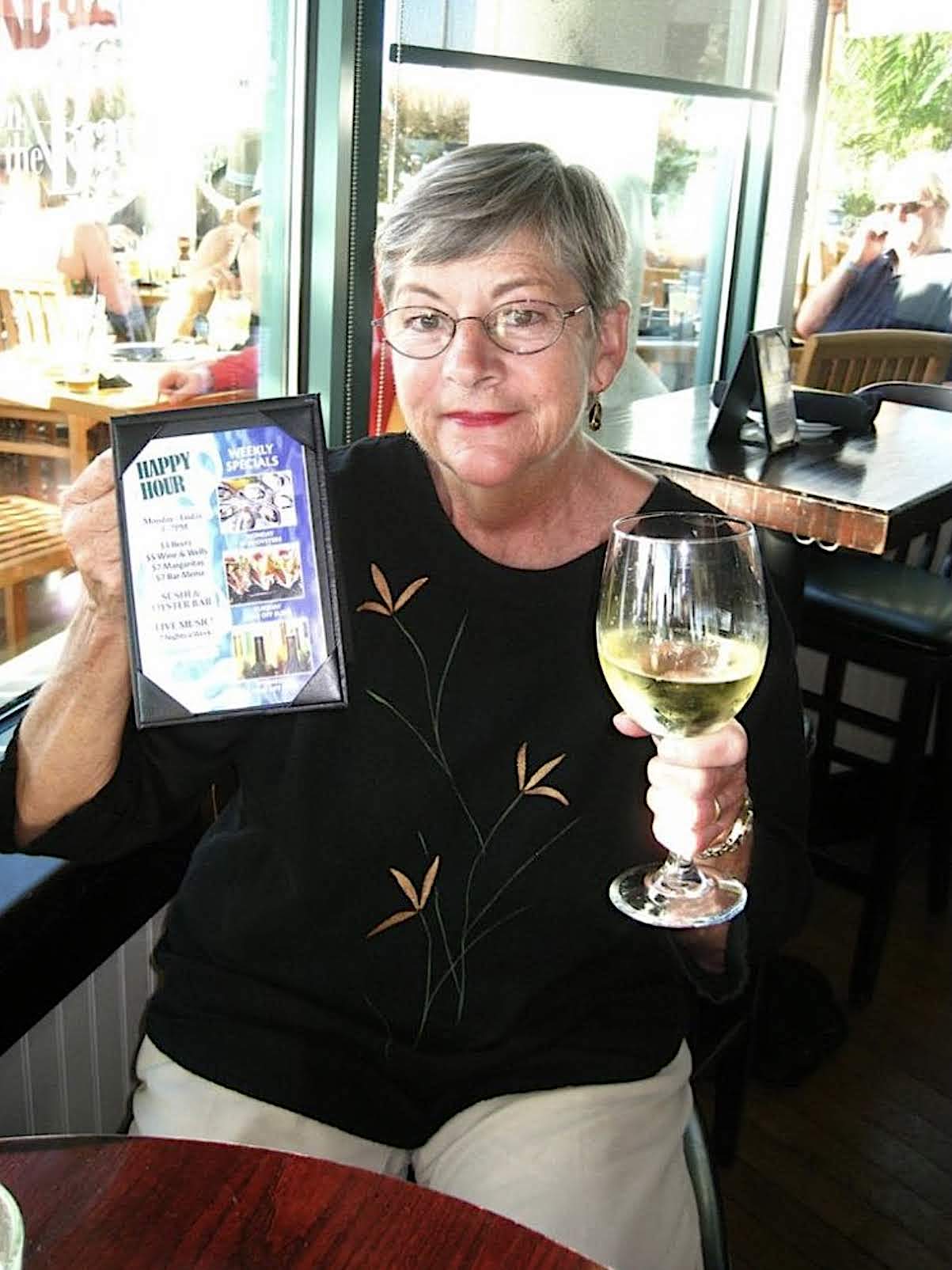 Happy hour was every hour with Sue.

Sunday was slow.  It was started with me listening to the Jesus Christ Show on KFI-640. It’s a program never missed as Neal Saavedra does such a great job.   Then six hours later, he does “The Fork Report”, a cooking show Sue always listened too.

The front yard needed a little more work, but first, a quick trip to Bed Bath and Beyond.  After careful consideration, it was decided grey and pink towels were required for the new bathroom, and a new entranceway rug was needed after all the construction work we did.

While at BB&B, a quick visit to Ralph’s was in order to get Cranberry juice as Miss Irene is coming over at 2:00 PM to visit.

Back home, the yard was attacked again just to make sure all was well. Can you spot Mr. Lizard in this photo?  He saw me coming and got so excited!  Hint: Look under the white lamp.

The garden is ready to receive winter crops! Maybe a pumpkin?

While relaxing in the yard, a small voice was heard.  What could it be?  Well, my little buddy from yesterday was waiting for me while sitting on the top of the wall.  He remembered the bug-herding from yesterday and was ready to dine again.  Great, my life is reduced to herding bugs to my pet lizard! 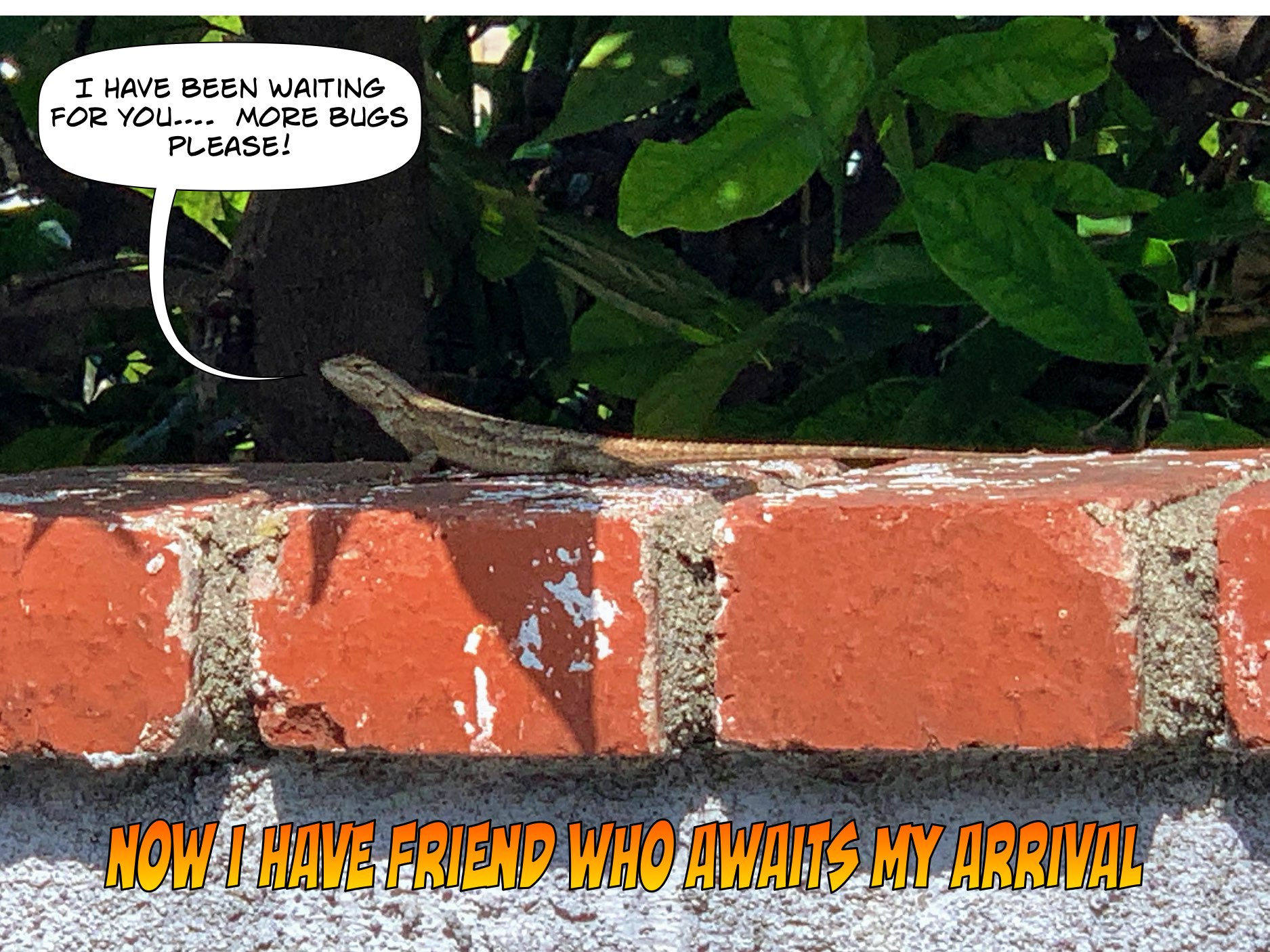 He was full after about five minutes of watering the mulch!

After working in the yard, I decided to attack the kitchen overhead lights.  A new set of LED fluorescent replaces had arrived a couple of days earlier.  So, onto the ladder and up to the ceiling and with a pair of side-cutters and a little bit of black tape, the new lights were installed. Wow, what a difference.  These little puppies are 6500 degrees kelvin, and each one is twice as bright as the lamps they replaced.  It took about forty-five minutes to replace the first fixture.  Wednesday, the second set of lights will arrive, and the process will be repeated. 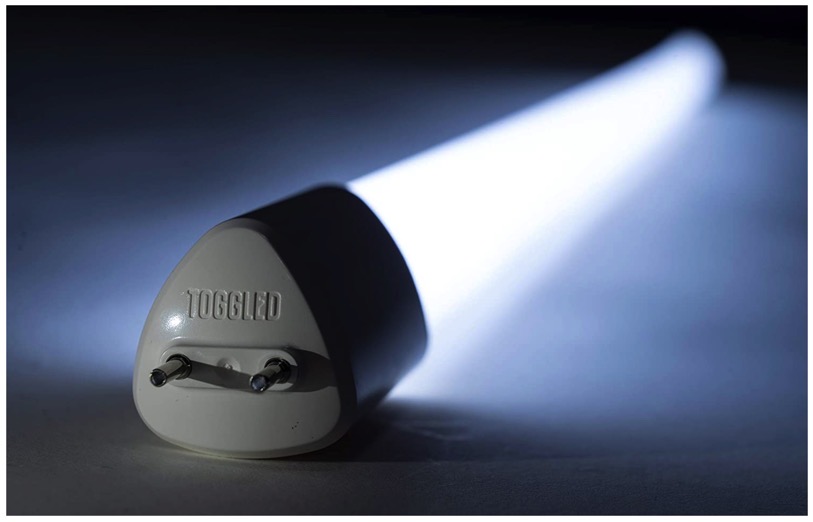 Irene came over at about 2:00 PM, and we sat and talked for two hours.  She loved the new bathroom and approved of my selected artwork, plus she suggested London and New York on either side of the mirror.  That was a great idea.

We enjoy each other’s company.  Sometimes Irene can be scary!  (When Sue and I got to the dance, I sat right next to the witch and had NO IDEA WHO IT WAS until she spoke!) 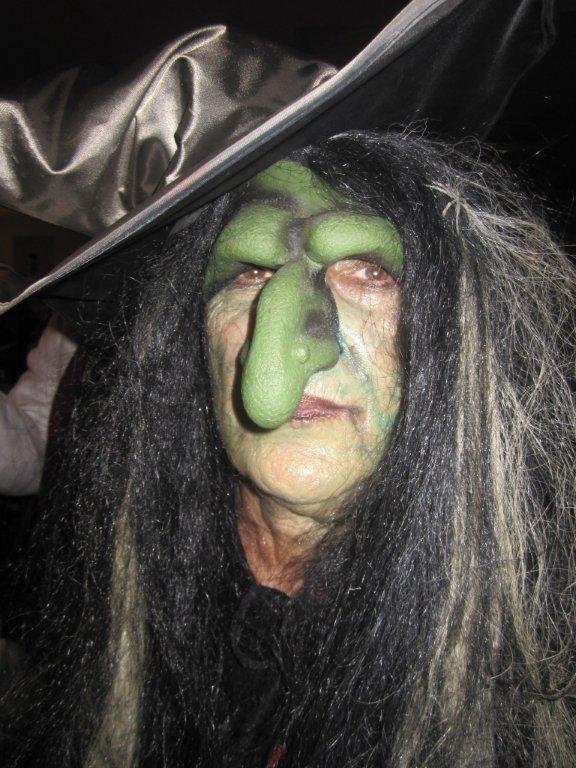 Irene has been a member of my family for a long time now, and it’s fantastic that she knows everyone.  She is a lovely person. 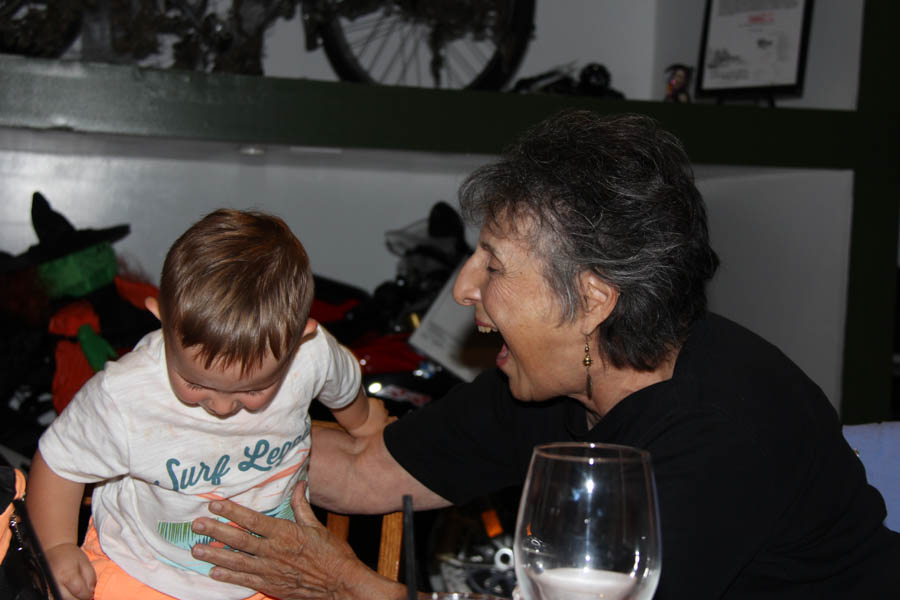 Irene and Calhan were goofing off!

Irene headed home about 4:00 PM, so it was piddling time so into the garage, and tomorrow’s work was prepared.  Since there are always things to do around a house, I make kits the day ahead of time, so when the fancy strikes me, no excuses will work!

Time for a short walk, two miles should be sufficient to prepare me for dinner.  Dinner this evening was easy, I cooked up a tri-tip steak. The tri-tip is a triangular cut of beef from the bottom sirloin subprimal cut, consisting of the tensor fasciae latae muscle. Untrimmed, the tri-tip weighs around 5 pounds. The one-third portion was perfect. 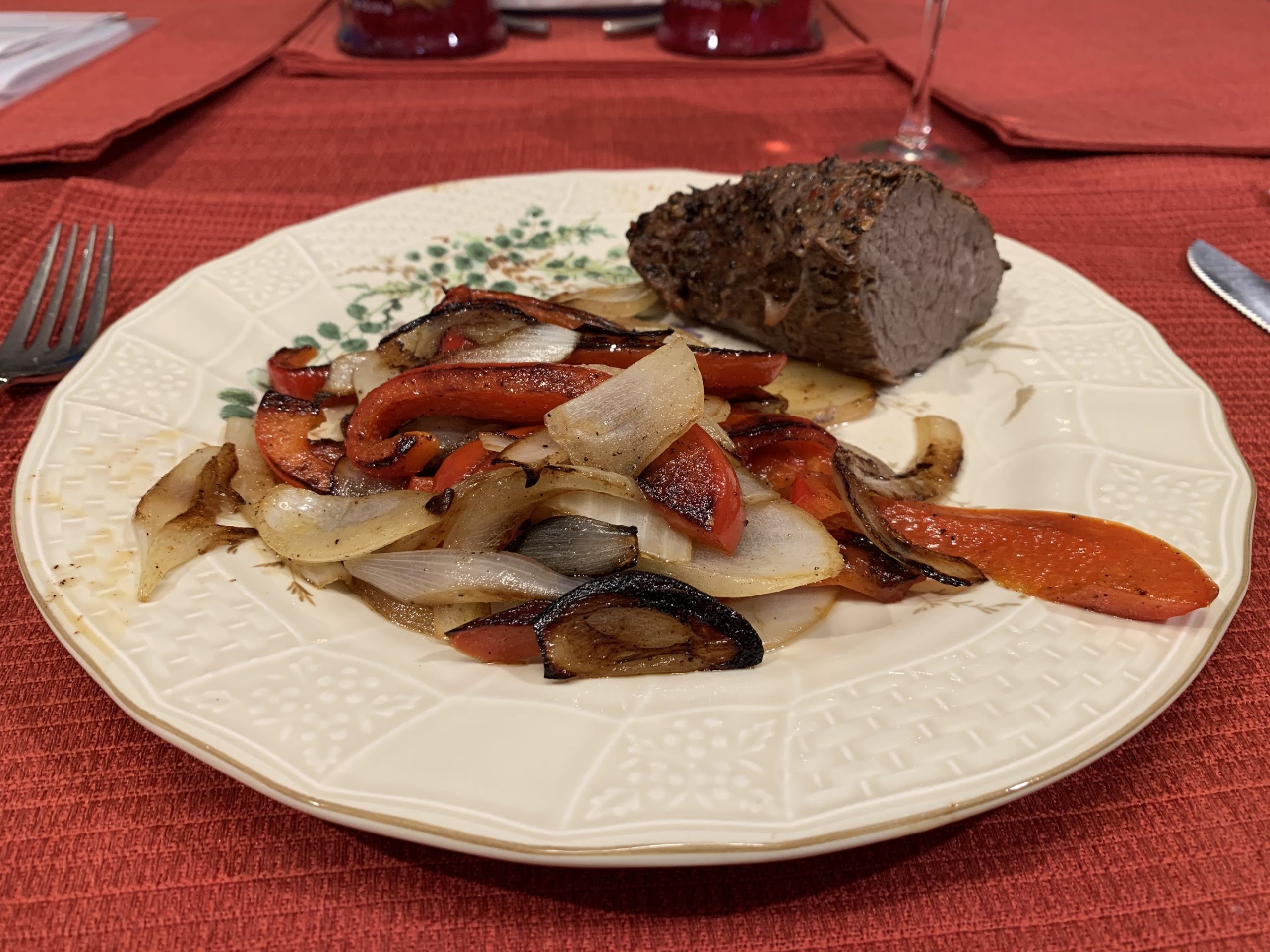 A simple meal was perfect to end a simple day!

Of course, I fired up the candles, and the place began to smell like Christmas, which is coming quicker than I expected.  A glass of Sue’s special wine was poured (non-alcoholic), and it was perfect.  There was soft music playing in the background, and all was good.  It would have been perfect had Sue been sitting next to me, but that is not to be.  Her picture is right next to the table so I can talk to her when I need to do so!

Marianne was called while the dishes were being cleaned up to thank her for steering me to “Middle”.  That show is terribly funny and brings home a lot of memories of raising kids.

Colleen asked me to convert and post Jax’s video, so it was put on the top of my website at http://lilesnet.com/jax.mp4, but it is also here on the Daily Diary. It’s a cute video complete with sound!  The kids did a fantastic job putting this together.

I attempted to call Lee, but she was not available this evening.  The chronometer indicated 10:00 PM, so it was decided to become horizontal for a while.  I fixed a hot chocolate, and that did me in for the evening.

Just an old retired guy trying to finish out my last years on this planet loving my best friend and wife, having fun, learning, and passing on helpful things to others.
View all posts by Paul →
This entry was posted in Cooking, Friends, Gardening, Walking, Working Around House. Bookmark the permalink.
Powered by Maribol IMDB Plugin