It’s Tuesday And All Is Well!

All I have to do is close my eyes and think of you, and my mind explodes with thousands of sweet memories we made together! These memories stay at my fingertips and bring me a lot of happiness!

Sue loved to dance, and we kept dancing until her pain got too bad.  The last time we danced was a short dance on New Years’ Eve 2020 at Old Ranch! We stood, rocked back and forth, and held each other tight.  Never in a million years did I realize that it would be our last dance!  I will cherish that night forever! 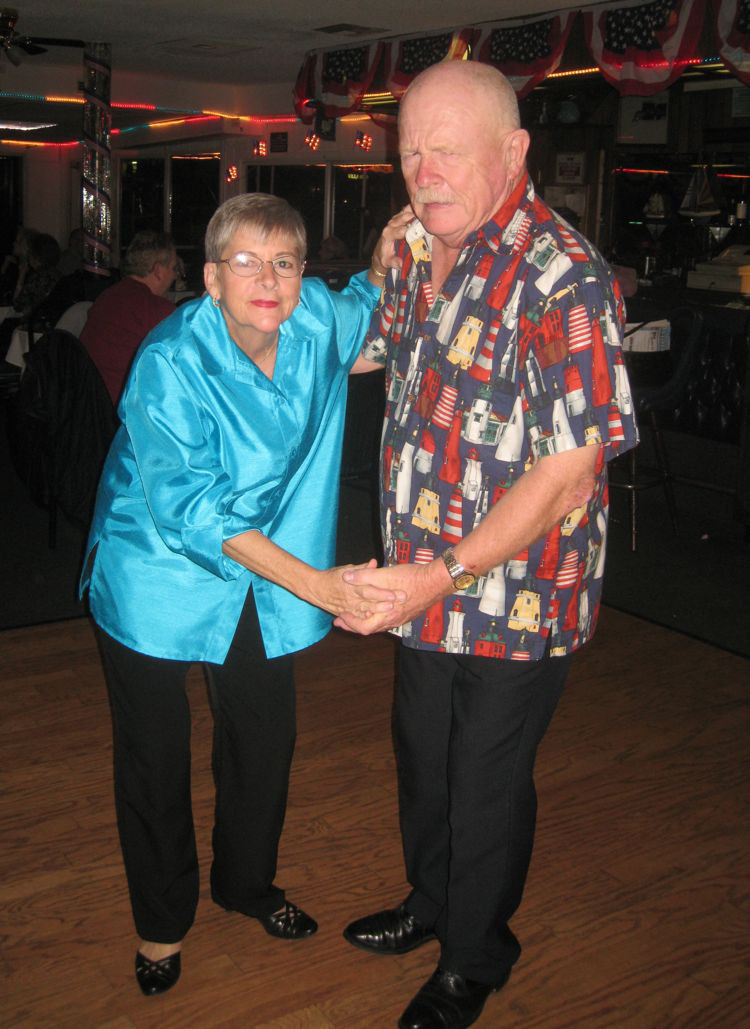 Ten years ago we decorated for Christmas all day long, but you said, “Let’s go dancing” and w were off like a shot!

First thing this morning, I ran to Lowe’s garden department to get the appropriate container for Sue’s new Lavender that I was given by the Z’s! The pot was fired clay, blue, and was massive. After reading about Lavender, I wanted the container to be sturdy as it will have to be taken inside during the winter months,  Lavender can’t stand cold weather and thrives in the heat.

The sign was made by our old friend Dave who passed several years ago. I moved it from another location in the yard.  The plant is on the walkway into the house, so I get to see it coming and going! 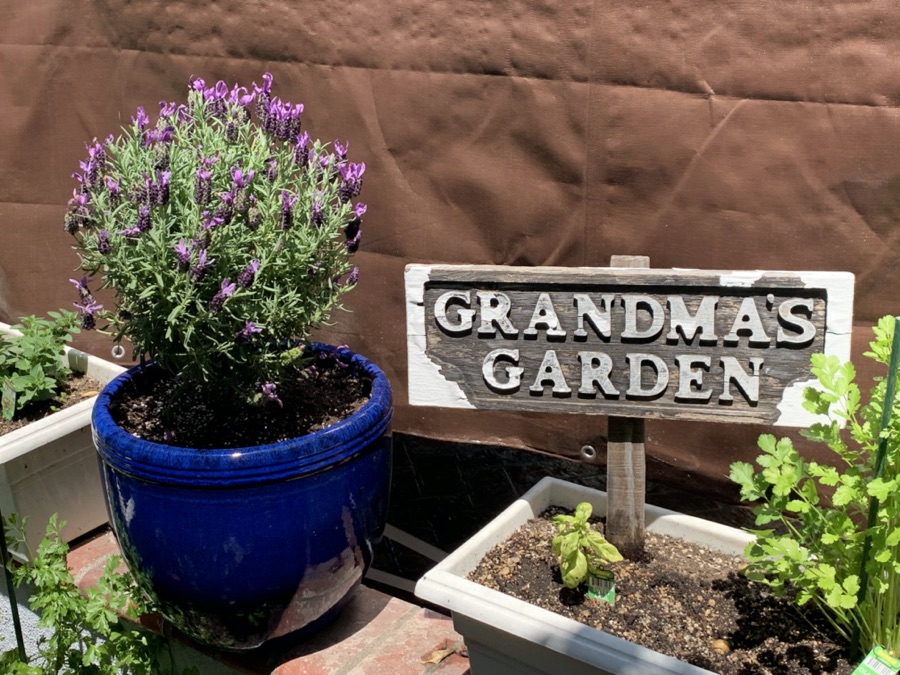 The patio needed some work, nothing major, just minor cleanup, and relocating of certain items.  I spent about two hours in the front yard, as I plan to have several guests over the next few days.  I headed for the back yard and sprayed Miracle Grow into the garden.  While watering, I saw the first evidence that the corn is beginning to mature.  Look with care, and the start of the male part of the plant (the tassel) is starting to form.

Yes, corn has boy and girl parts on the same plant. Want to have an excellent topic for a cocktail party? Read more… 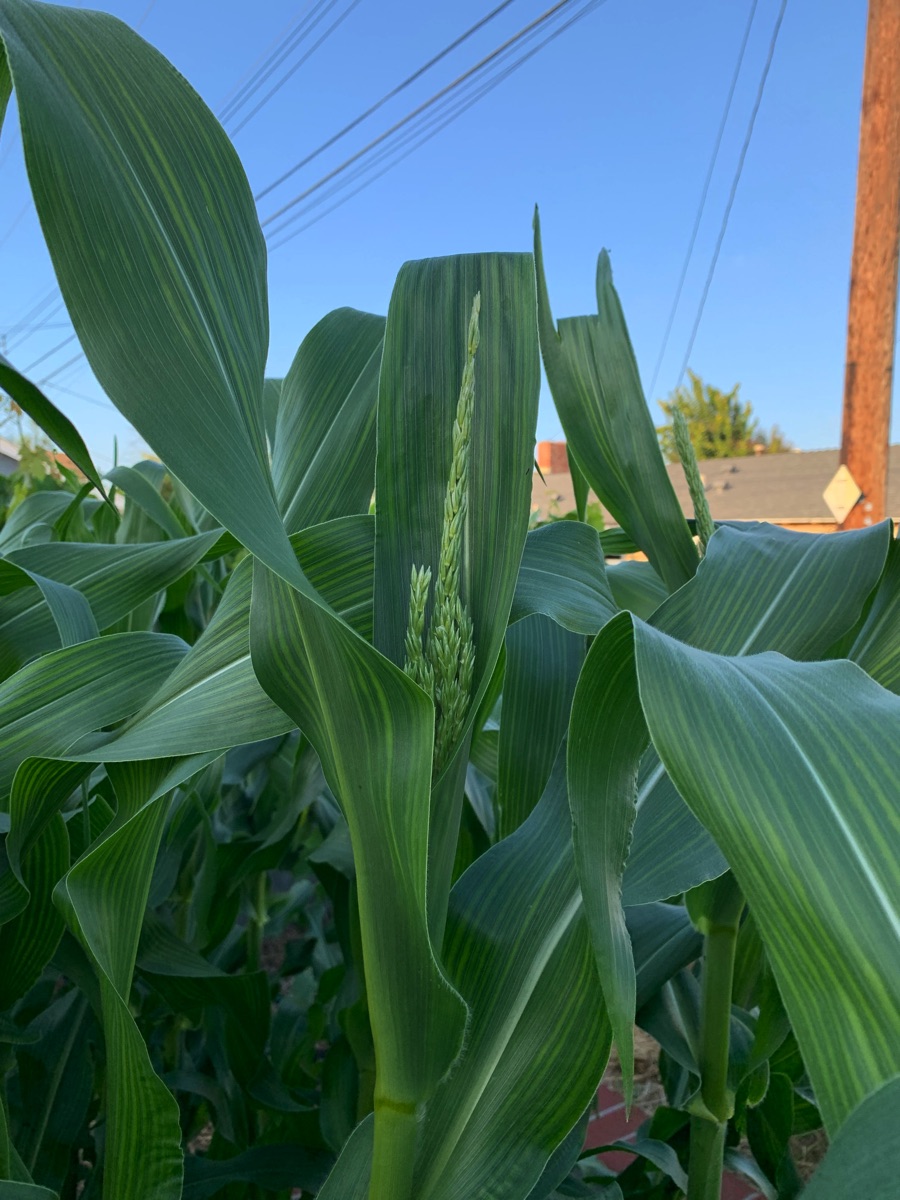 Look carefully as the first “tassel” is peaking out!

The sunflowers are starting to form individual seeds which in a month or so I will take out of the face and roast! Health Benefits. Sunflower seeds may help lower blood pressure, cholesterol, and blood sugar as they contain vitamin E, magnesium, protein, linoleic fatty acids, and several plant compounds. Nutty, small, creamy, and brown, sunflower seeds make an excellent snack that is not only delicious but also undeniably healthy. … Sunflower seeds are rich in Vitamin E, have anti-inflammatory properties and cardiovascular benefits. 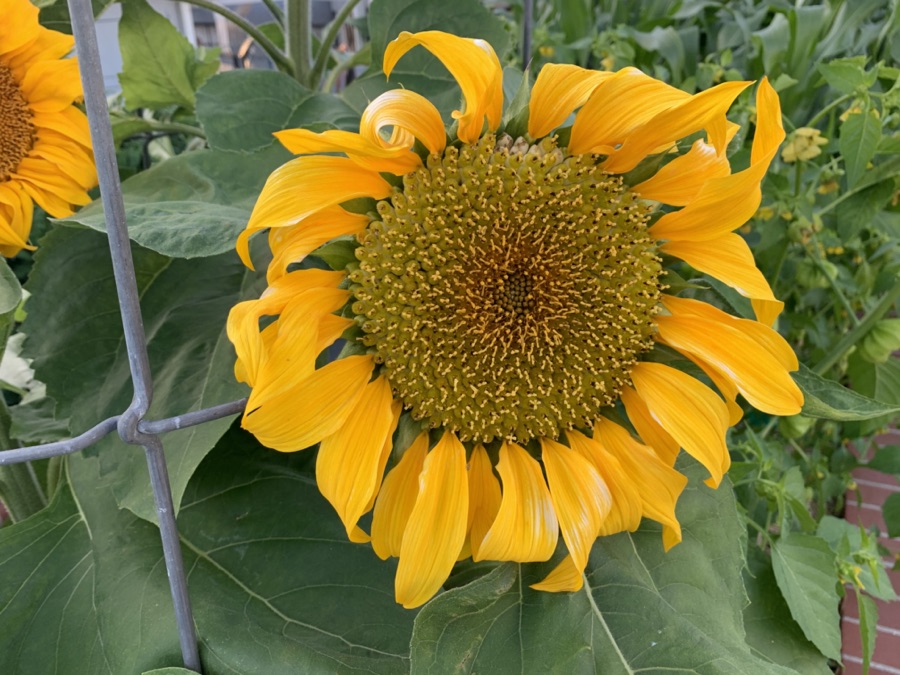 The seeds are beginning to form.

The smaller sunflowers are just pretty and are used to draw need into the garden.  I do not process these flowers, like me, just there for the beauty! 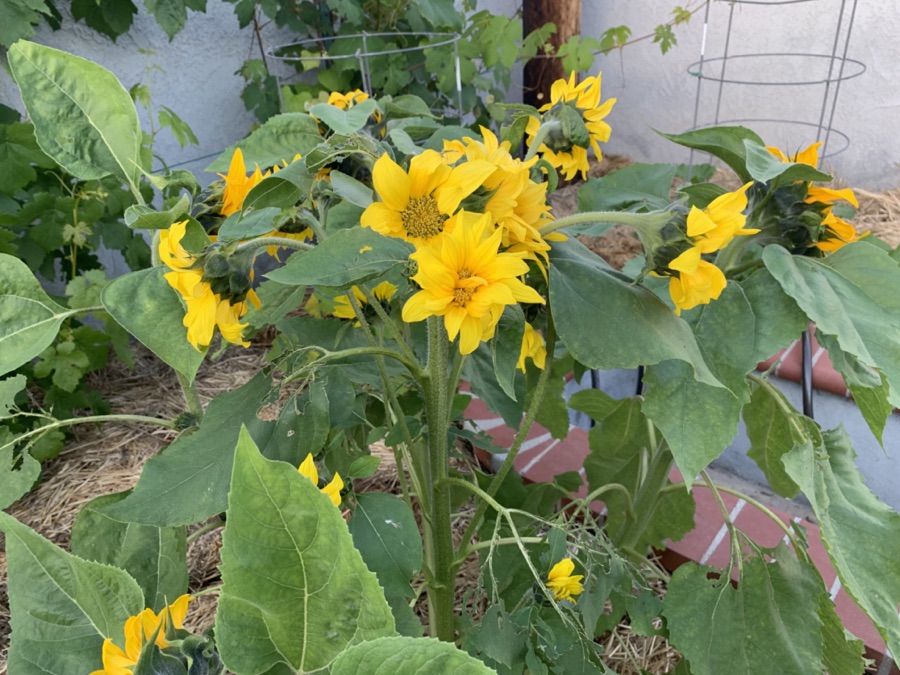 After getting the patio ready, I dug into the refrigerator and found the plate from last night.  After three minutes in the microwave, it was ready to eat!  Delicious!  This recipe goes into the “do it again soon” file!  While I will want to help restaurants out because of the pandemic effects, I do not see a lot of restaurants in my future (except for the Indian restaurant).

Irene came over, and we had a great time from about 2:00 PM until about 3:30 PM.  She brought me some yeast, so I am going to make bread tomorrow morning.  It’s been fifteen years since I have made bread, so I am going to be treading new ground.   Sue’s mother, who left us in 1999, taught me how to make bread, including sourdough, and I still have the recipe for her starter!

After Irene returned home, I changed back into my “grubbies” and began work on the roof.  I have to replace about eight feet of the first-board, which became a feast for those pesky termites. Today I removed the rain gutter and the drip flange, plus I removed the nails that held the board down.

Tomorrow I plan to run a Dremel saw across the first-board and take it out.  I could use my more massive rotary saw, but it is too heavy to hold upside down, plus I want to get close to the rafters.

That’s enough work for this afternoon.  Being retired and having no schedule, I plan to finish the job by Friday taking four days to do what I usually would do in one day.  That’s OK as I can work more carefully and plan out each phase before jumping into the boiling oil! 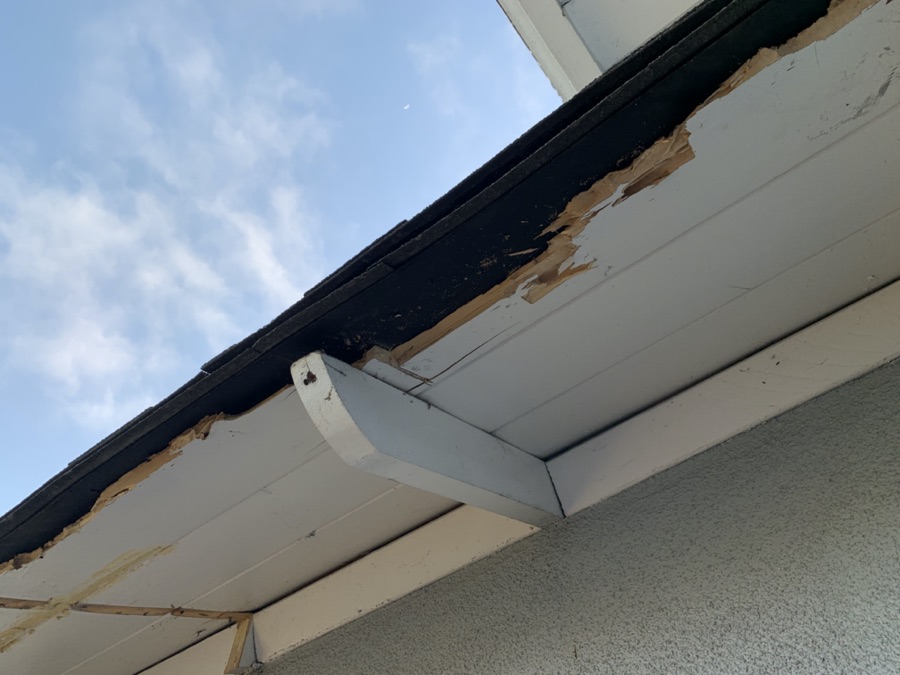 Progress is being made slowing and surely.

After a couple of hours, I returned inside, changed back into something presentable, and headed out for the late evening walk.  The sky was beautiful, reminding me of marshmallows or cotton candy with the pinks and blues and fluffy appearance. 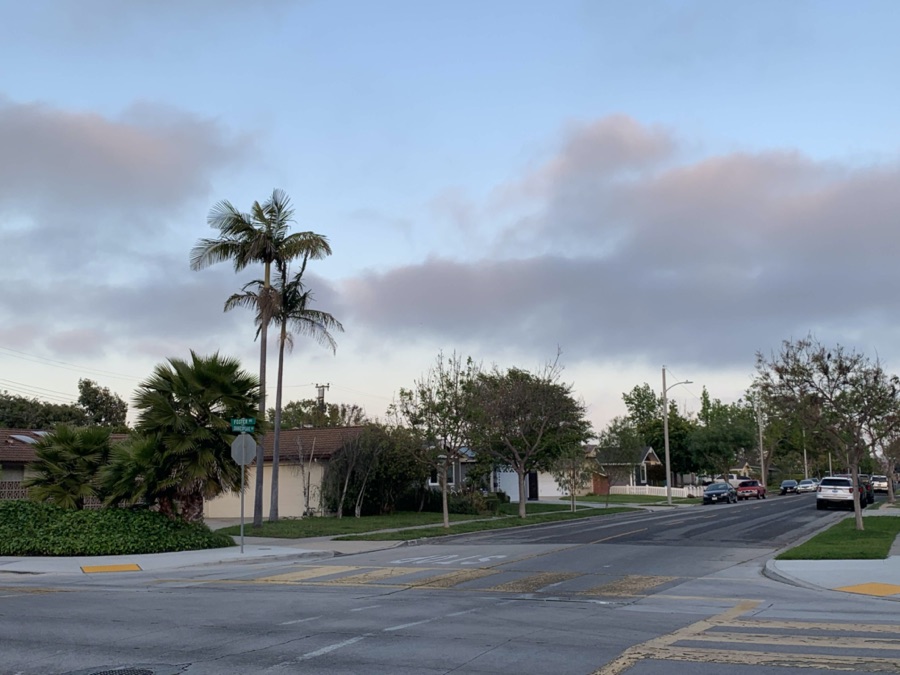 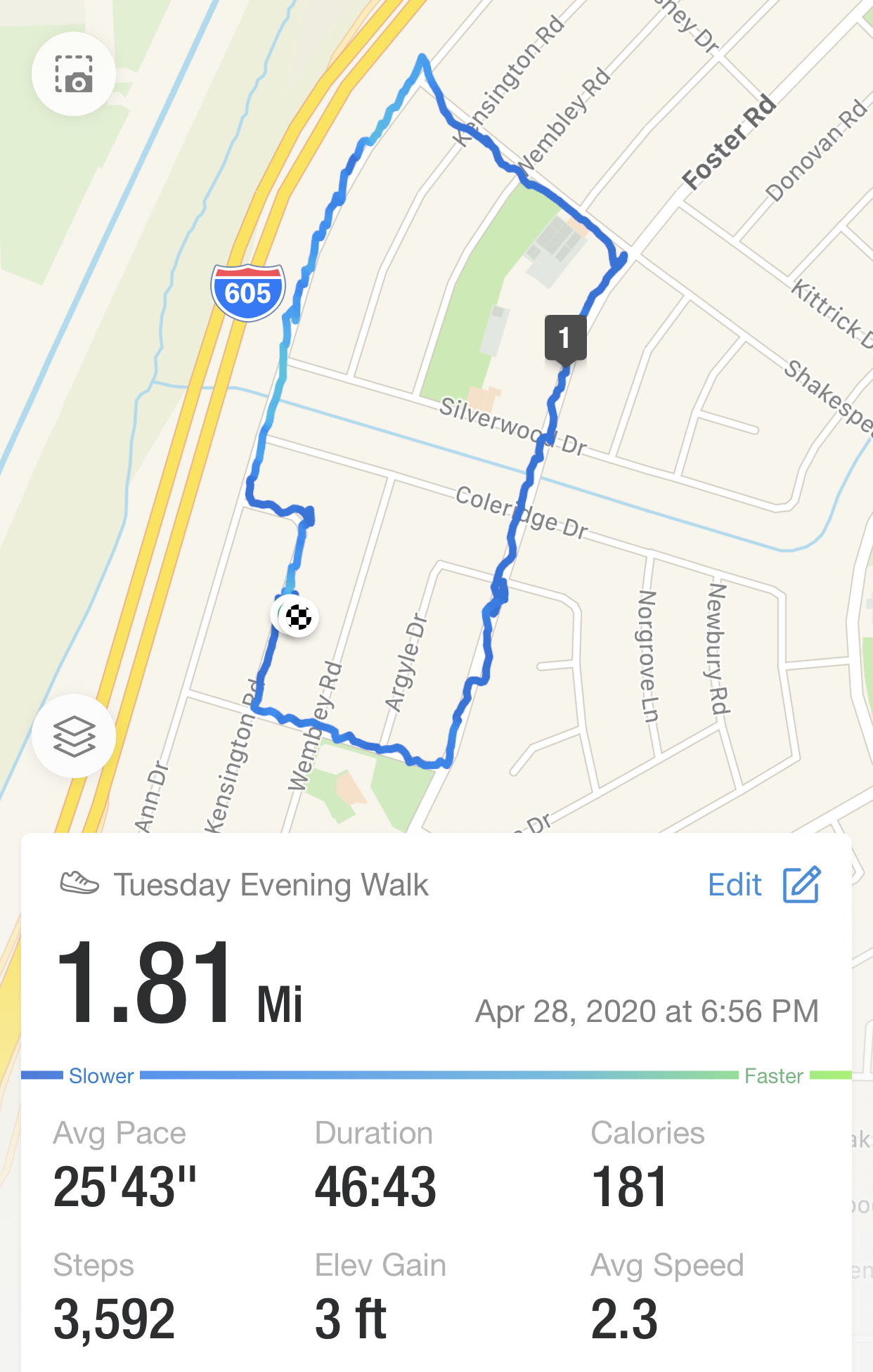 This summary represents the walk-walk (meaning I was walking the hood).

After returning home, I looked at the pedometer, which I had running all day, and I managed four miles with 9,000+ steps today. That means while working in the yard and on the house, I walked two miles, which, based upon the way my feet feel, is about right! 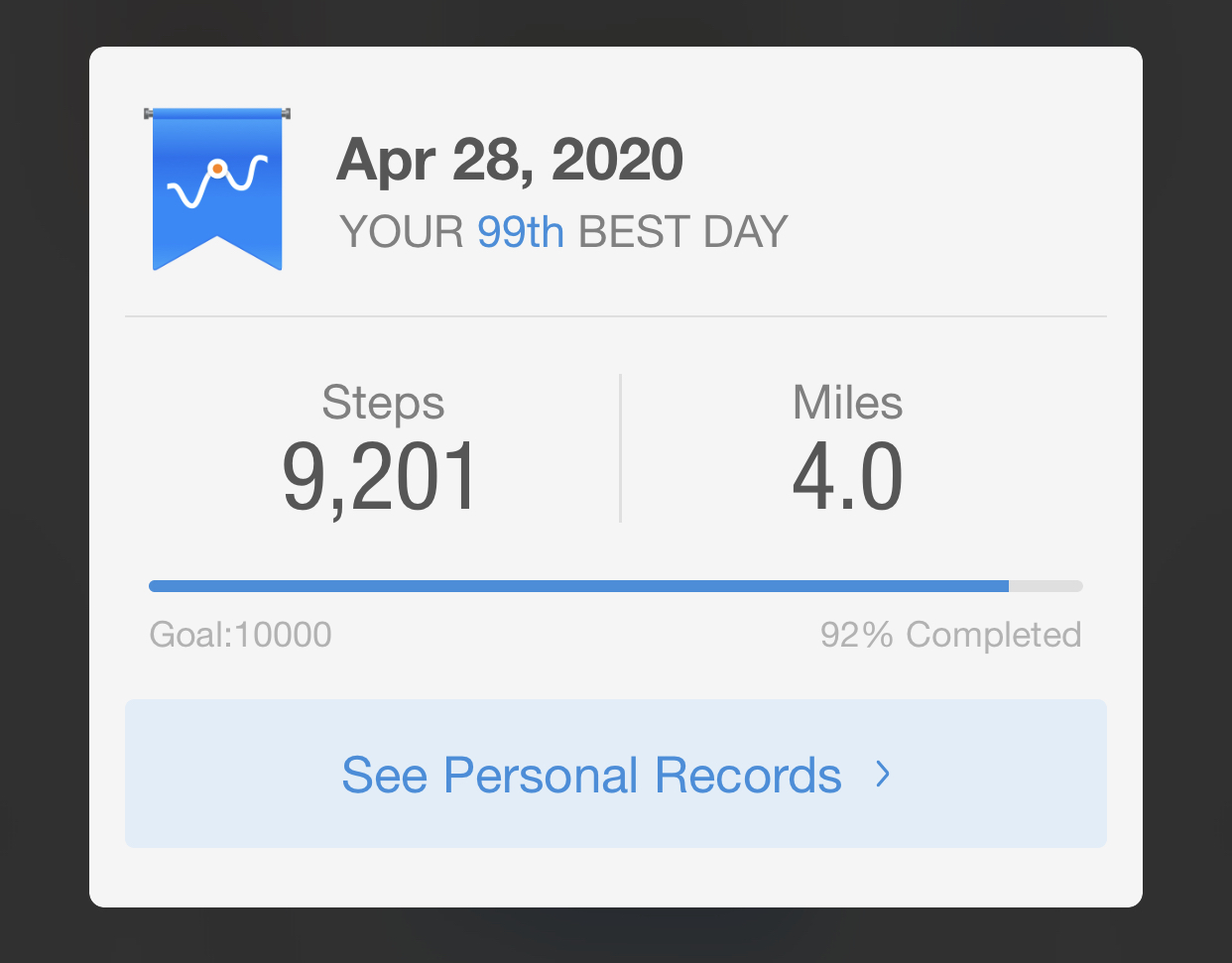 I had 99 better days, but that is OK for a combination of walking around the house working and the walk-walk!

Before going in for the evening, I tidied up the patio, fluffed the pillows, and put the swing in his little brown jammies for the night!  The brown covering is a 15 mil thick commercial tarp that lasts about two years, but it saves the swing cover from sun damage! 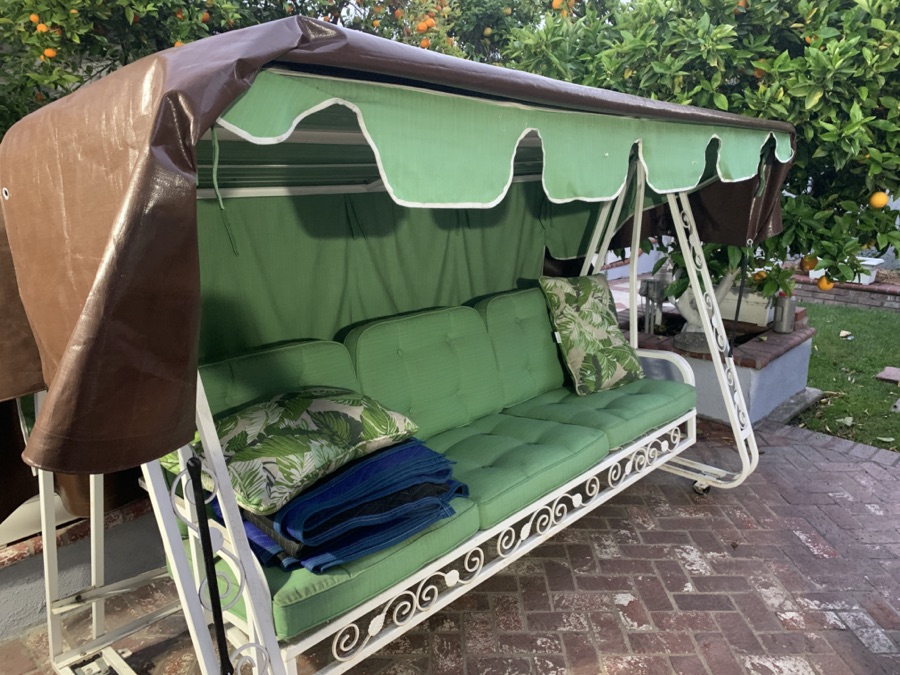 This swing is the seat of honor for the impromptu “staff meetings.”

The rest of the patio was adjusted, chairs covered, and the table returned to normal.  This little patio is quite pleasant almost any time of the day, plus it is right off the living room with easy access to the kitchen! 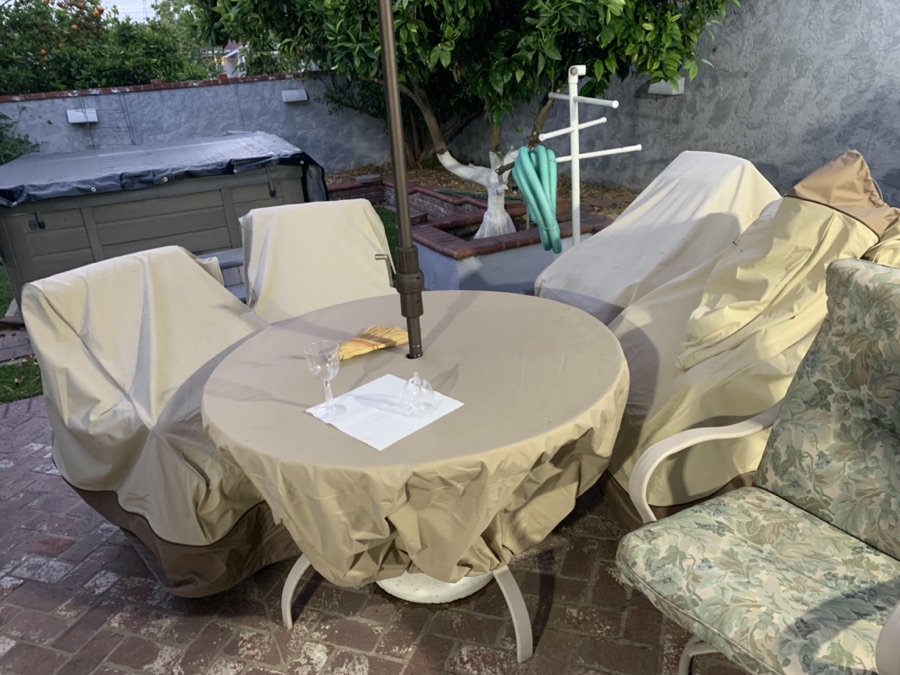 Colleen called via Bat Phone about 6:00 PM as she was getting ready to crash, so we talked for a while.  She sent me the photo below of my great-grandchildren, Calhan and Logann. Too cute! 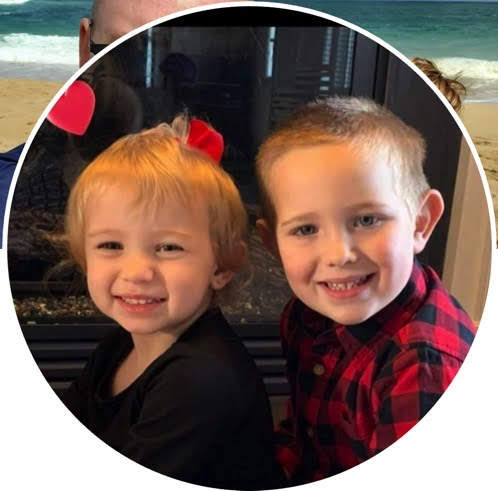 My great-grandkids in New Hampshire.

I called Robin about 7:00, and she was at Maggie’s House, so we only walked for a few minutes.

Before cashing at 10:00 PM, I thought about tomorrow’s meals, and the cartoon below explains my dilemma!.

Same problem I have when I cook!

Good night all!  See you in the morning Lord Willin’, and the Creeks Don’t Rise!

Just an old retired guy trying to finish out my last years on this planet. I lost my best friend and wife in early 2020. I was blessed again by reconnecting with Dr. Mary Côté, a long-time friend. Mary and I got married July 28th, 2021, and are enjoying life together and plan to spend the rest of our lives being a blessing to our friends and family.
View all posts by Paul →
This entry was posted in Cooking, Gardening, Walking. Bookmark the permalink.