When I think of Sue, I see her love of life and love for others.  She never a bad word about anyone, even people who left a deep hurt in her heart by their actions.  Fortunately, that was a very small number! She so loved the little ones, and they felt an attraction to her, somehow they knew?  Sometimes I just sit in amazement with the vivid memories she left me. She is here; I can feel her close by me. I will love her always and forever! 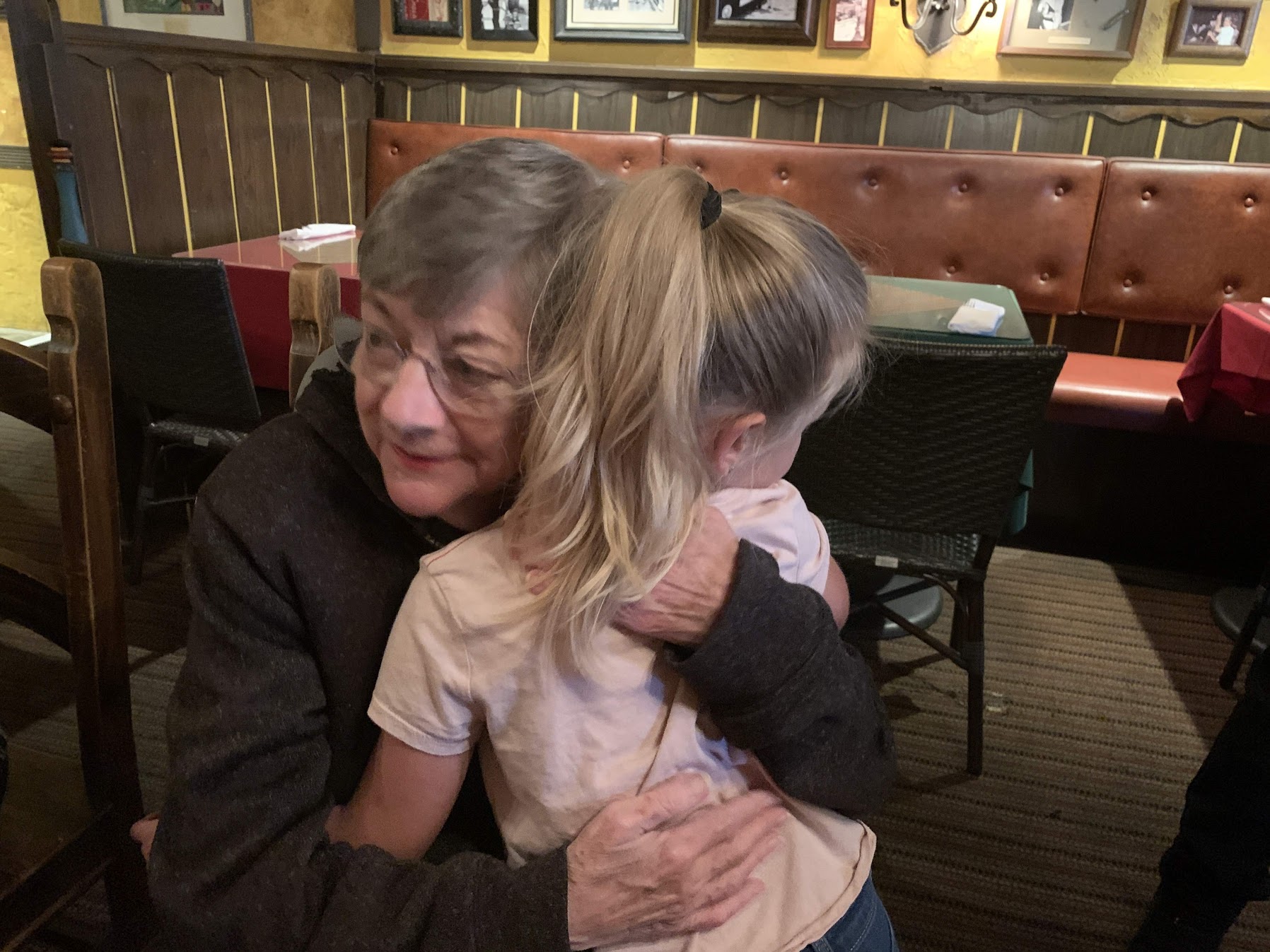 Great Grandma & Lilly, A Force To Be Reckoned With!

Robin was up before me this morning, and I did not even hear her.  By 7:00 AM, I was finally moving and ready to go beginning with a cup of coffee!  It was a great morning, and I could see the temperature was heading into the 80s and blue skies were on their way. 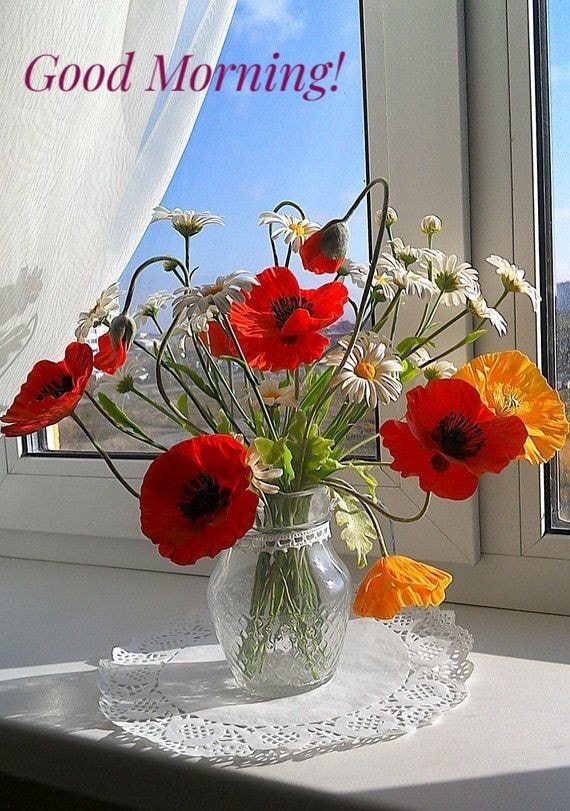 It’s going to be a good day!

We had some toast, and I took my pills before we got ready for our walk!  Robin thought she heard something in the back yard, so I took a gander.  Big mistake, it was NOT a gander, it was a duck, actually two of them!  You know it is the mating season right now, so the couples have coupled up!  We see duck-couples all over the hood this time of year, some with big smiles on their beaks! 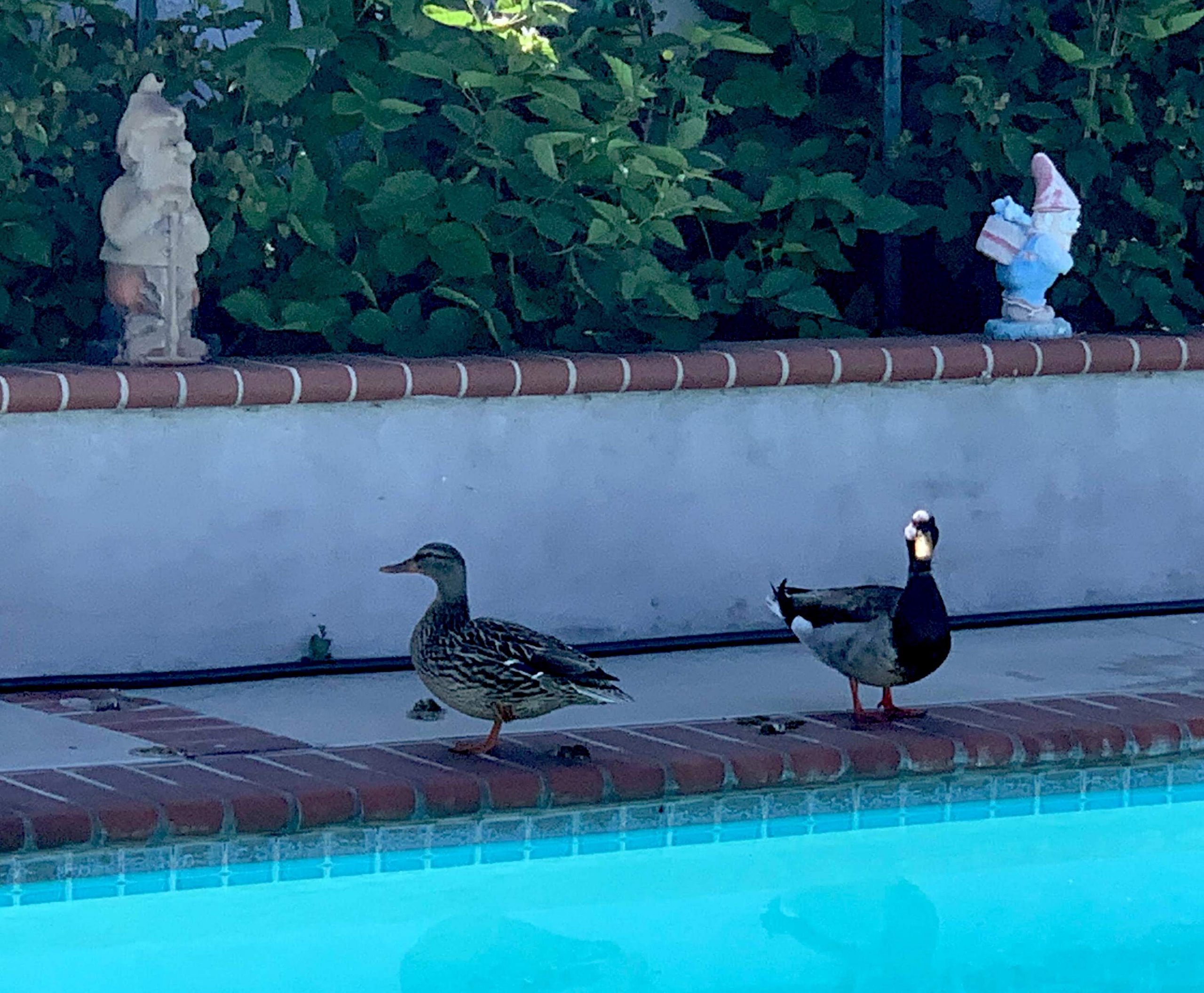 Since I speak fluent Duck, I listened in to the conversation, and they were talking about going for a swim, but they had forgotten their swimsuits.  Finally, they decided to go skinny dipping!  To give them privacy, I quickly turned around. 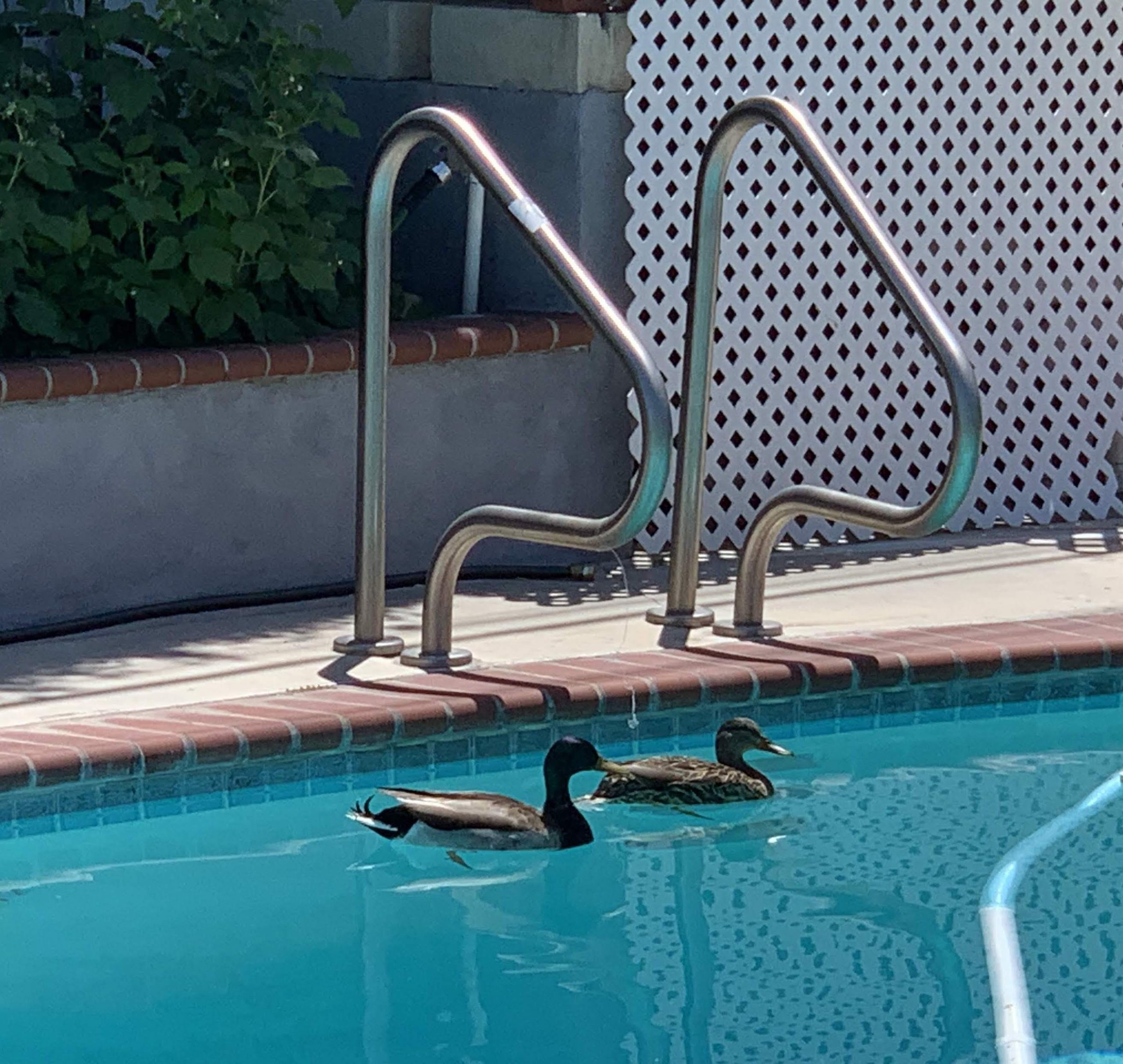 Mr. & Mrs. Duck was taking a nice rest in the pool! They stayed a couple of hours.

We are off and walking heading south, going towards the Ward’s home.  Arriving at their home, I made a call, and Teri was working at Dave’s place this morning.  There was no one to wave at so I decided to wave at random cars passing by.  They probably thought to themselves, “That poor girl, having to watch out for that goofy old man!”.

We then continued our walk in the hood adjusting the direction so we could go three miles!.

The “chalk-fairies” had been busy as indicated by the hopscotch drawing.  I dared Robin to try it, but she thought better and decided not to do it.  A wide decision! 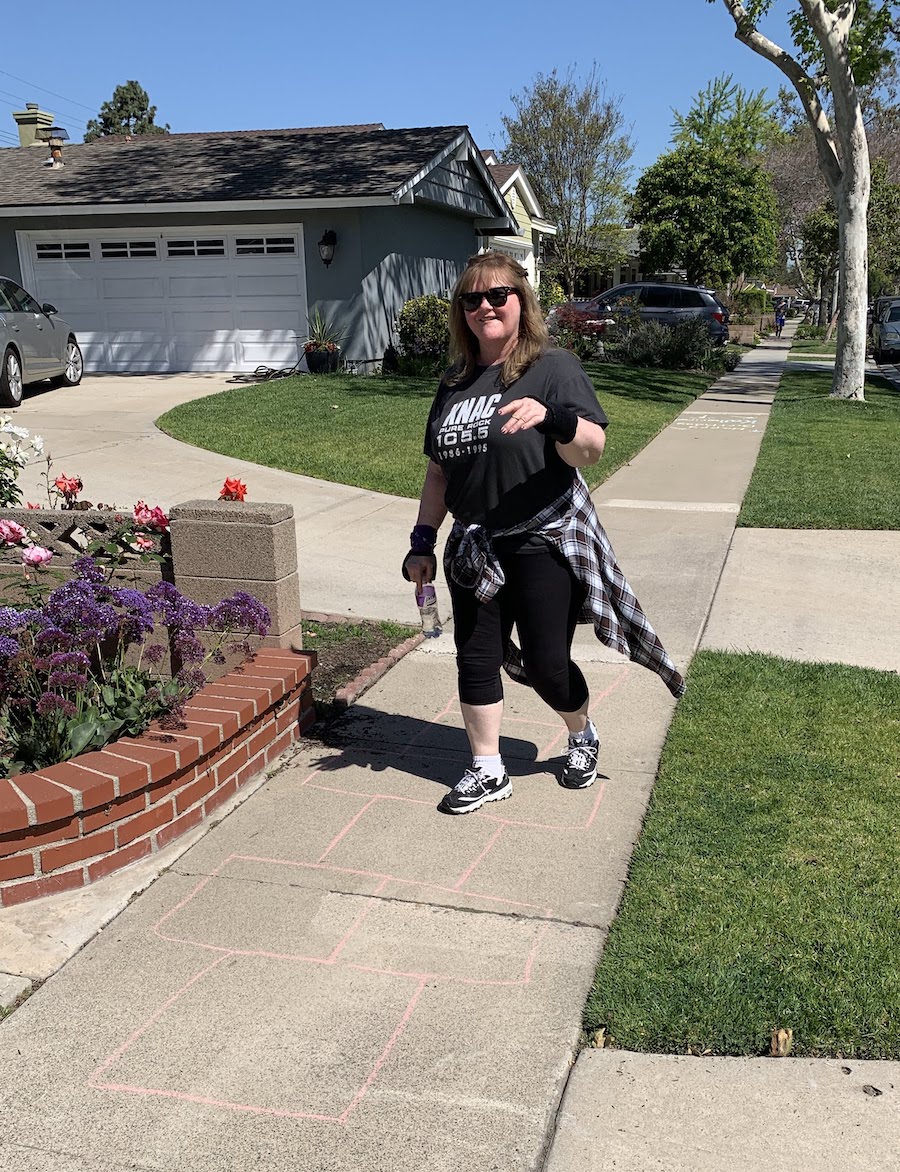 The hopscotch game brought back memories of elementary school. OMG, that was almost 70 years ago!

An ancient form of hopscotch was played by Roman children,  but the first recorded references to the game in the English-speaking world date to the late 17th century, usually under the name “scotch-hop” or “scotch-hopper(s).”

A manuscript Book of Games compiled between 1635 and 1672 by Francis Willughby refers to ‘Scotch Hopper?. They play with a piece of tile or a little flat piece of lead, upon a boarded floor, or any area divided into rectangular figures like boards’.

In Poor Robin’s Almanack for 1677, the game is referred to as “Scotch-hoppers.”

We continued our walk with me, pointing out things that I have seen for years.  We stopped in front of the “magic mirror”, where I did my rather dramatic and powerful  “Mirror mirror on the tree, who is as magnificent as your majesty??”  I do not understand how the mirror all of a sudden fogged up! 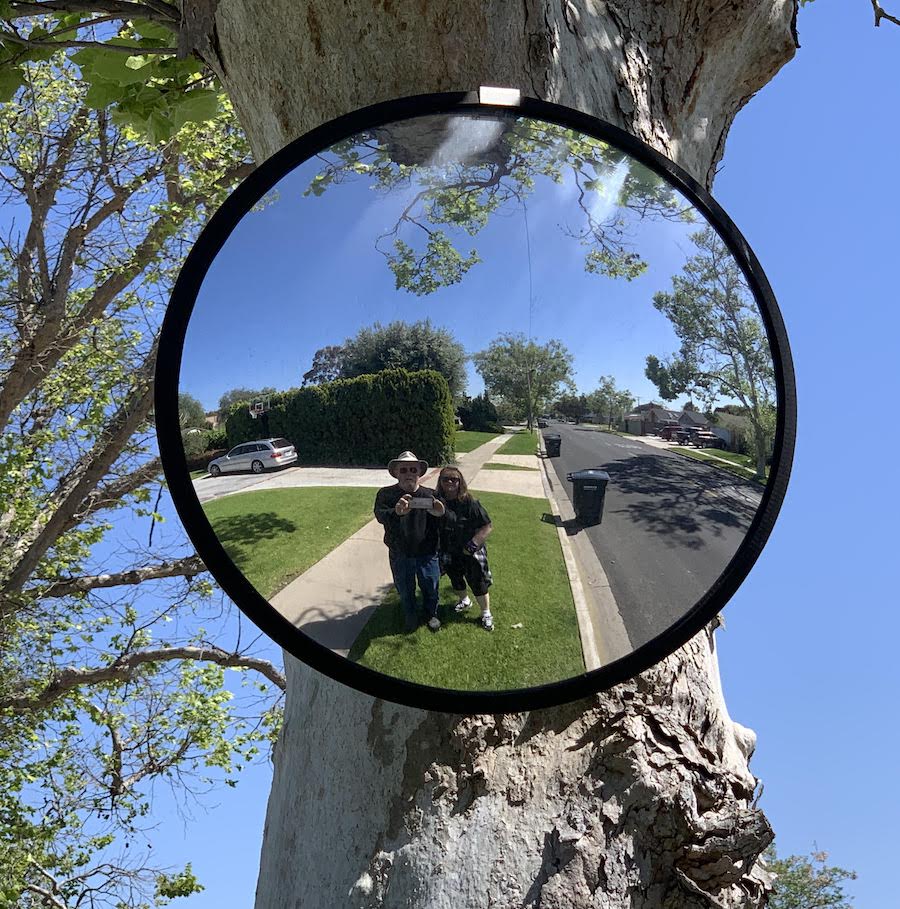 That is us in the mirror. The mirror is up in a tree, so the person backing out of his house can see the sidewalk.

We continued our walk and extended it two blocks, so we cold made it an even three miles!  It is very healthy to walk, and I enjoy walking with Robin. 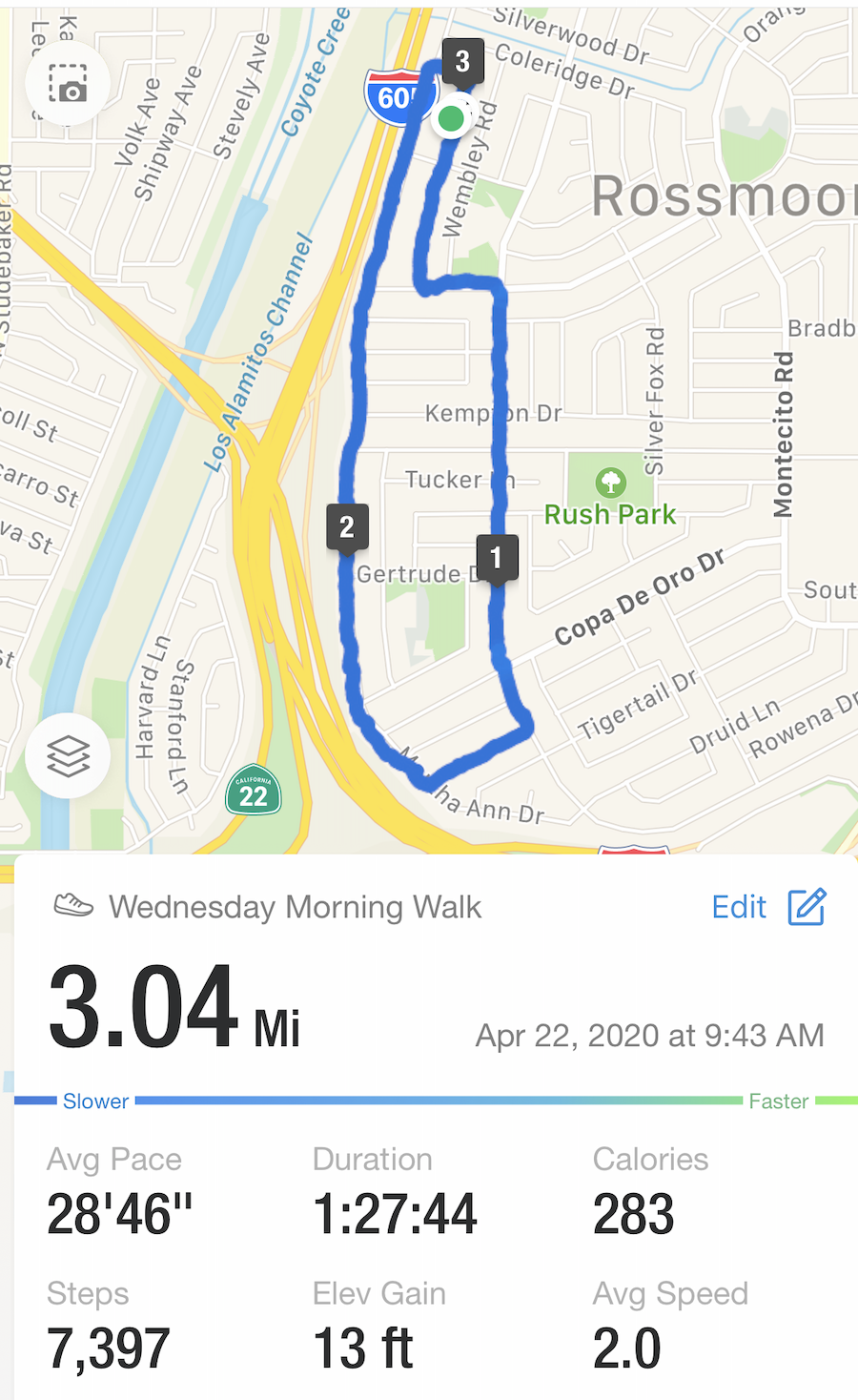 You will notice that according to the official pedometer, we walked off 283 cal now the trick is, what can I have for lunch it’s only 283 cal?

When we returned, the cleaning folks were in the house, so we decided it was time to grab lunch. We agreed that the Yucatán Grill was going to be our destination today. In the olden days, when we worked together, the Yucatan grill was one of our favorite places to go for lunch. Sue enjoyed their vegetarian tamales!

It was such a beautiful day we decided it was an excellent time to eat in the park.  I returned home from the Yucatan Grill using the 605 freeway, which put us off on Katella, which is only six blocks from the park. Then disaster struck, someone was in our place! How dare they take our table? Well, we found a better table just 100 feet away, so we plopped her selves down and had a great lunch. 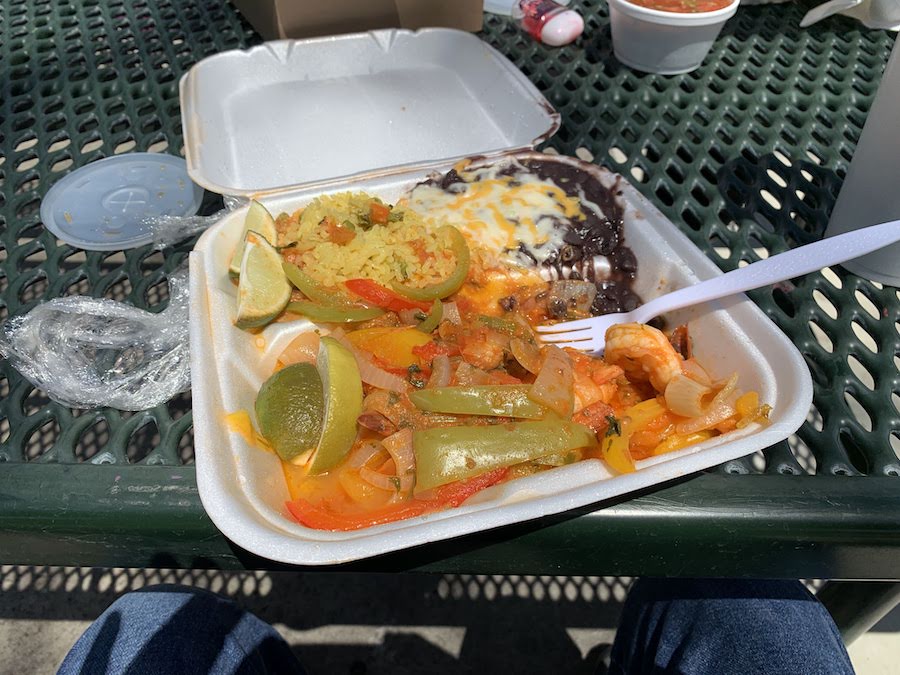 Being a creature of habit, I had shrimp Diablo for lunch. Yes, you can see habanero peppers in the mix. That’s why they called me “hot stuff.”

Robin was being adventurous today and decided to go for the “popcorn shrimp.” It looks good, and it must’ve been because while I was eating my meal, Robin devoured hers. I think it’s the first time that she ever finished a feast before me. 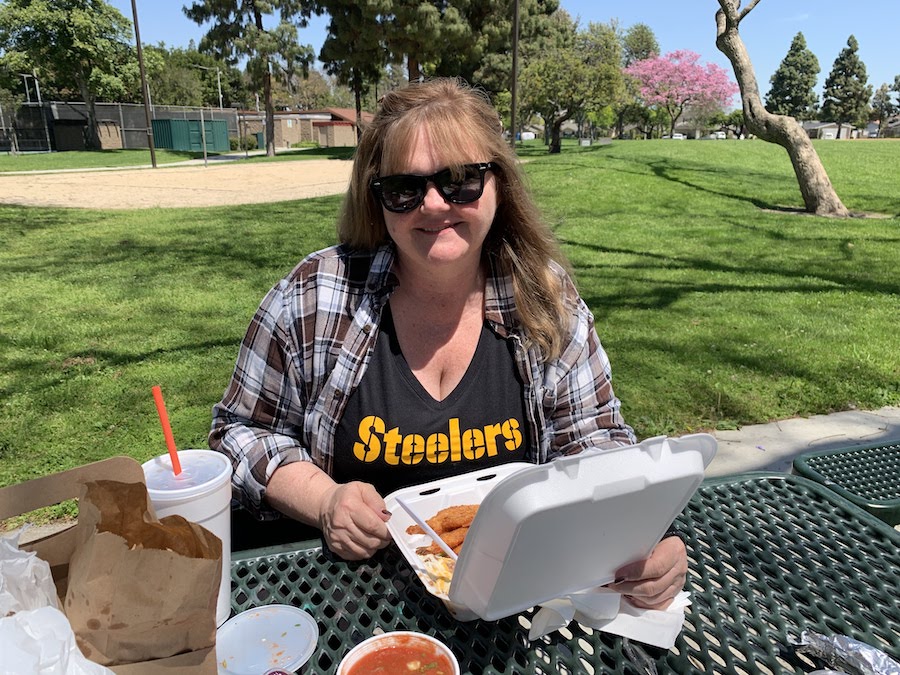 After arriving home, Robin packed up and headed for Corona. Before she left, we decided that we would go to Temecula on Monday morning and that Robin would come and stay with me Sunday night, having Bob drop her off Sunday afternoon. That way, I could drive her to Temecula, we could stop off and see Lee on the way back and have lunch with Lee,  and then I would drop Robin off at her home in Corona on my way home. Sounds like a perfectly logical plan to us!

I continued working on the little termite issue in the afternoon. I got the Makita grinder out, cut out the nails the held rotten wood down. I then proceeded to take a piece of 2 x 4 and cut it to shape so it would replace the 18-inch part of rafter I had to remove. According to Amazon, tomorrow, I should get the wood treatment I’ve been waiting for plus the wood repair material. As soon as I get those two things, I will screw the new piece onto the underside of the roof, slap some paint on it, and a couple of weeks no one will ever be able to notice a difference.

Before going inside, I spread the last of the straw mulch into the front garden.  It was about half a bale or 50 pounds of straw. 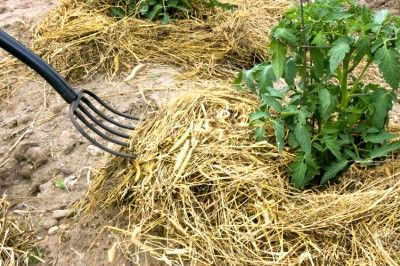 I worked it in around the orange trees and the pepper plants using a four-tooth pade.

By 5 o’clock, it was time to come inside, so I opened up my delivery of HelloFresh to see what delectable meals I selected for myself this week.  I can hardly wait to begin cooking these up tomorrow. Take a gander at what I will be performing my culinary magic with this week.

I can hardly wait!!!

After studying the three meal cards that came with the delivery, I had a couple of questions, so I went to the office and fired up YouTube.  I got my answers quickly enough, but then I stumbled upon a promotion film generated by the first company

I want to work for, North American Aviation.  I joined them in 1965 while I was going to school at USC.  I remember the projects they were talking about in this film quite well as North American was expanding like Topsey.  The film was used as a promotion to try to get engineering students to join NAA. We had just won the Apollo CSM contract plus the Saturn S-II contract, and things were humming.

I was not very hungry, but I decided I would try to finish off the tacos from the day before yesterday. They were delicious, and I didn’t even bother to set the table tonight.

At 7 PM, I talked to Robin, and we finalize the arrangements for Monday. She’s going to call Lee later on this evening and confirm the arrangements. By 8 o’clock I was sitting in the front room watching the news.

I’m sure I’ve mentioned it before, but I’m going to be a great grandfather again, for the fifth time. I talked to Jackie and Colleen using the Bat Phone quite often. Today I got a picture of Jackie and the little one! 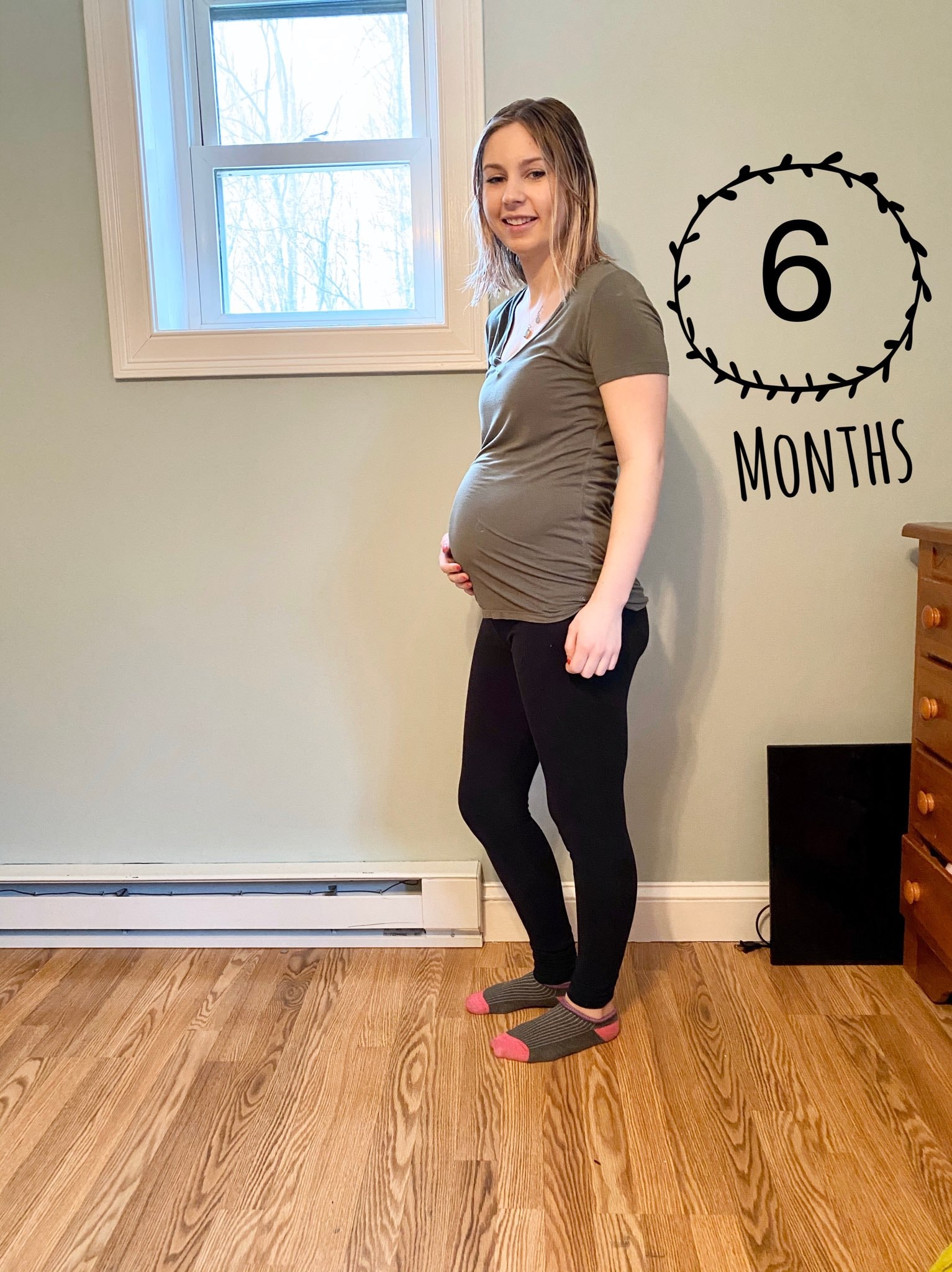 I spotted this cartoon a few days back, and I plan to get it framed and a little 5 x 7 arrangement so I can take to Donna! She should get a kick out of this (Donna has a Ph.D. in family-counseling).

Just an old retired guy trying to finish out my last years on this planet. I lost my best friend and wife in early 2020. I was blessed again by reconnecting with Dr. Mary Côté, a long-time friend. Mary and I got married July 28th, 2021, and are enjoying life together and plan to spend the rest of our lives being a blessing to our friends and family.
View all posts by Paul →
This entry was posted in Cooking, Family, Walking. Bookmark the permalink.