Friday Is Here Again! Next Comes The Weekend!

Sue, Nothing in this world compares to the comfort and security of having you to hold my hand.

We spent hundreds and hundreds of hours together cooking.  We were a team everywhere, but in the kitchen, we were a well-oiled mechanism capable of great things! Sue cooked, and I did prep/cleanup; that seemed fair!  Well, we met some Germans and got to talking Sauerkraut, a serious subject with them!.  Hans said it was easy to make; we responded, “OK, we will try it!”  We did, and it was terrific!!!  We still have the sauerkraut earthenware jar and utensils needed to make it!  She was quite an accomplished cook plus a fantastic sport! 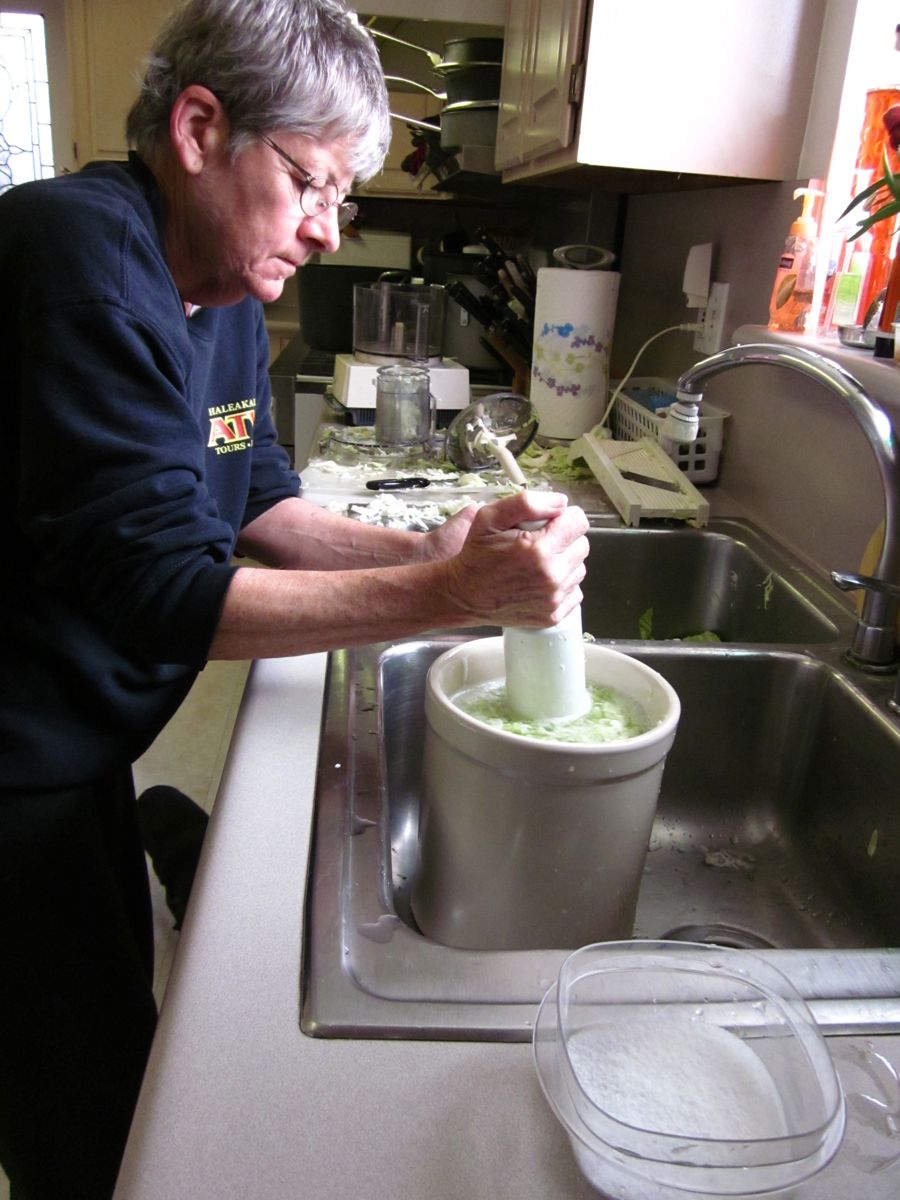 Sue would try anything when it comes to cooking! Here we pound the cabbage down into the earthenware jar ready for the five weeks of fermentation!

Did You Know? – Before frozen foods and the importation of foods from the Southern Hemisphere became readily available in northern and central Europe, SauerkrautSauerkraut provided a source of nutrients during the winter. Captain James Cook always took a store of SauerkrautSauerkraut on his sea voyages, since experience had taught him it prevented scurvy. German sailors continued this practice even after the British Royal Navy had switched to limes, earning the British sailor the nickname “Limey.” In contrast, his German counterpart became known as a “Kraut.”

Time for breakfast, so I looked in the frig, and the milk’s time was about up.  Cereal to the rescue, plus I got to us my jumbo blueberries and raspberries.  Not a wrong way to start the day!  After all, I am now officially 202.2, according to the scale.

I talked to Colleen and Robin on the Bat Phone before going outside to paint the front of the house.  I got everything ready but decided it needed to be in the Sun before painting.

Lunch was my next task.  I did the Apricot Chicken recipe with green beans and rice.  HAlf went into my mouth, and the other half hit the freezer. 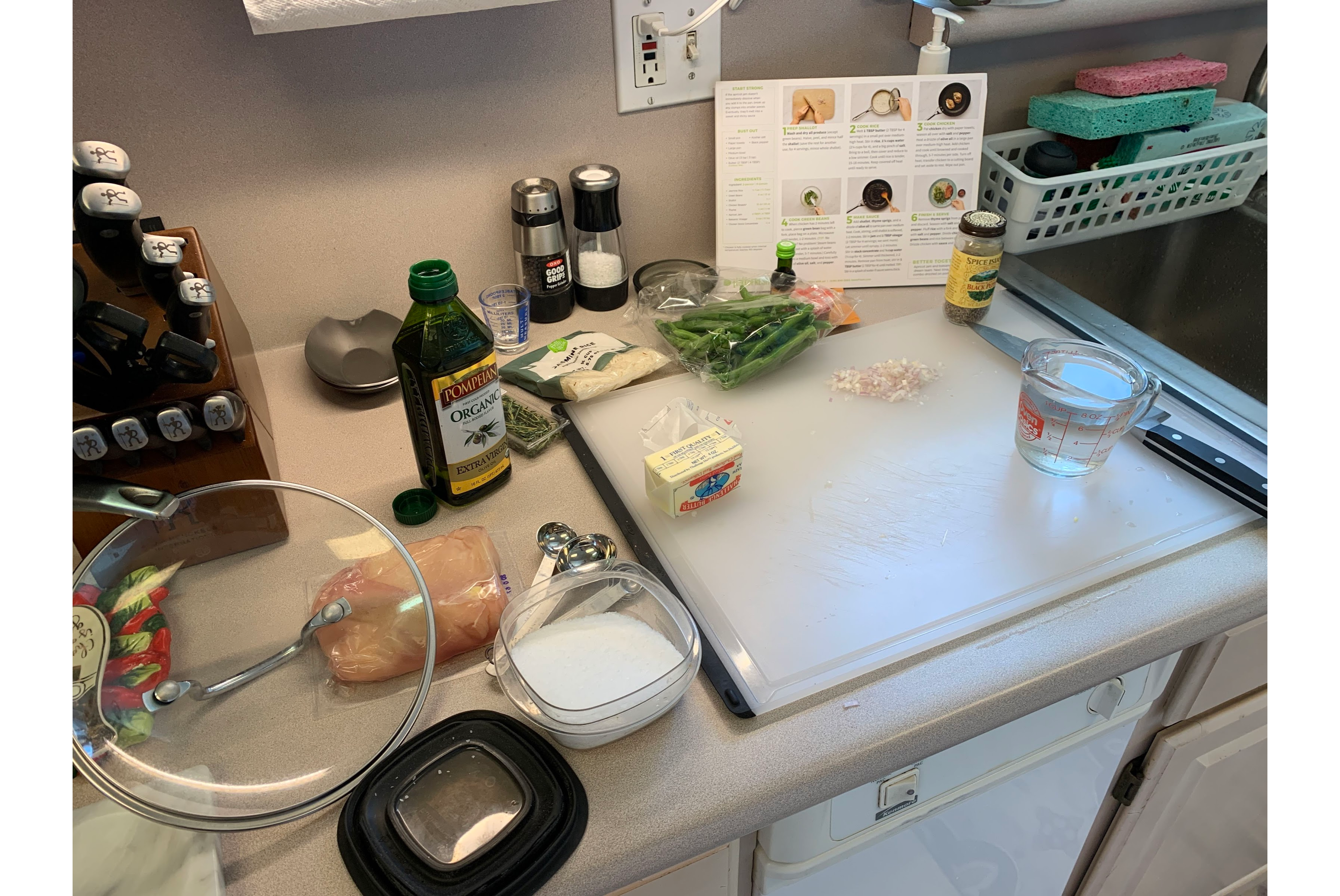 Getting set up for cooking is a great thing to do!!

Once everything is ready, I get underway! 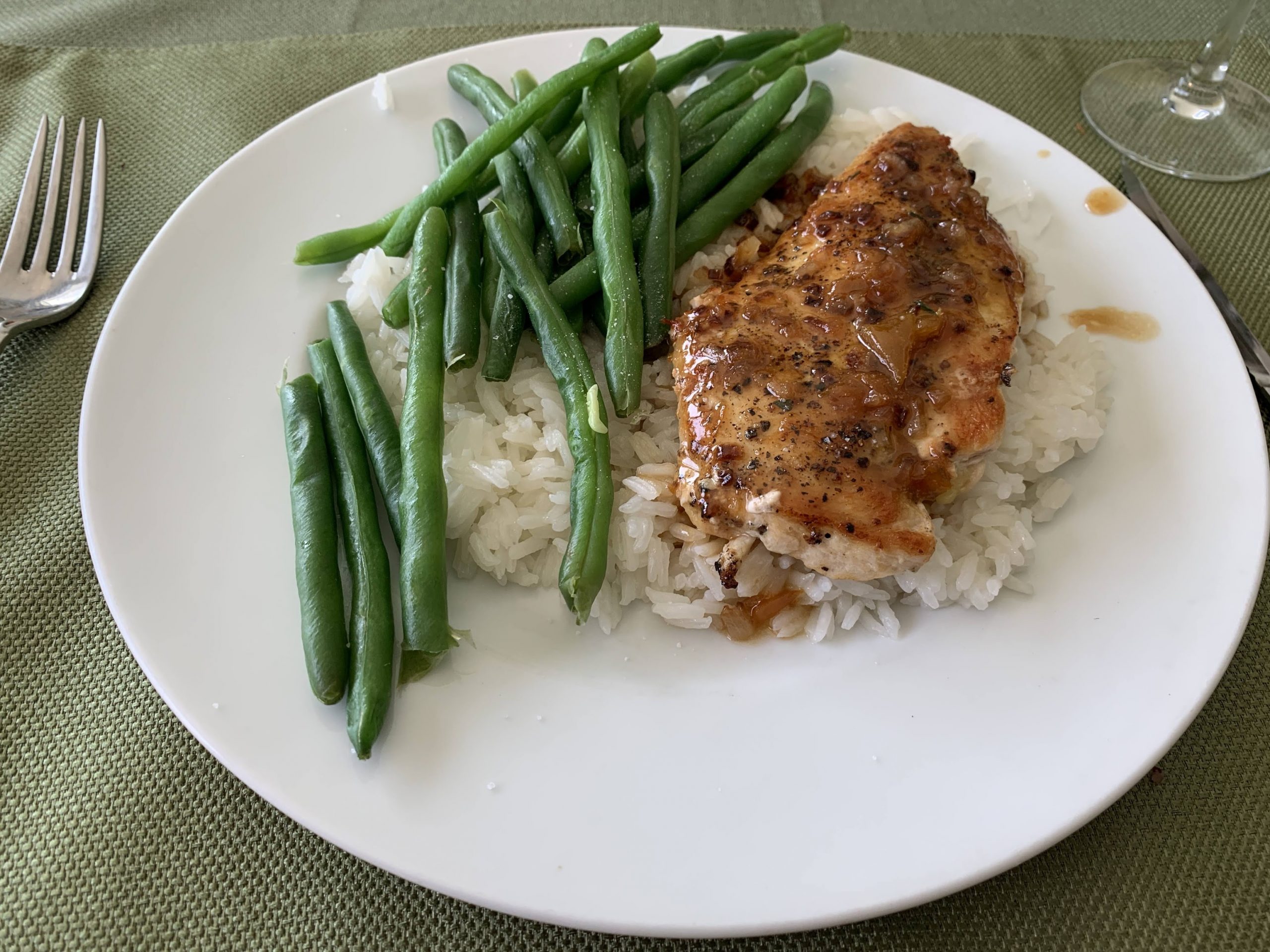 Ready to eat, and with a nice glass of wine, it makes my day!

Right after lunch, I heard the weatherman forecast rain over the weekend so I spent an hour in the garden finishing up the planting.  The Swiss chard, pole beans, bush beans, and English shelling peas are now in the ground awaiting Mother Nature to nurture them with a drink from the clouds!!

OK, time to paint!  Today it is outside as I was getting a little “cabin fever.”  The paint on the house is pretty good, but there are two places where the afternoon sun hits directly on the wood, so it is time to protect that area with a new coat of paint! 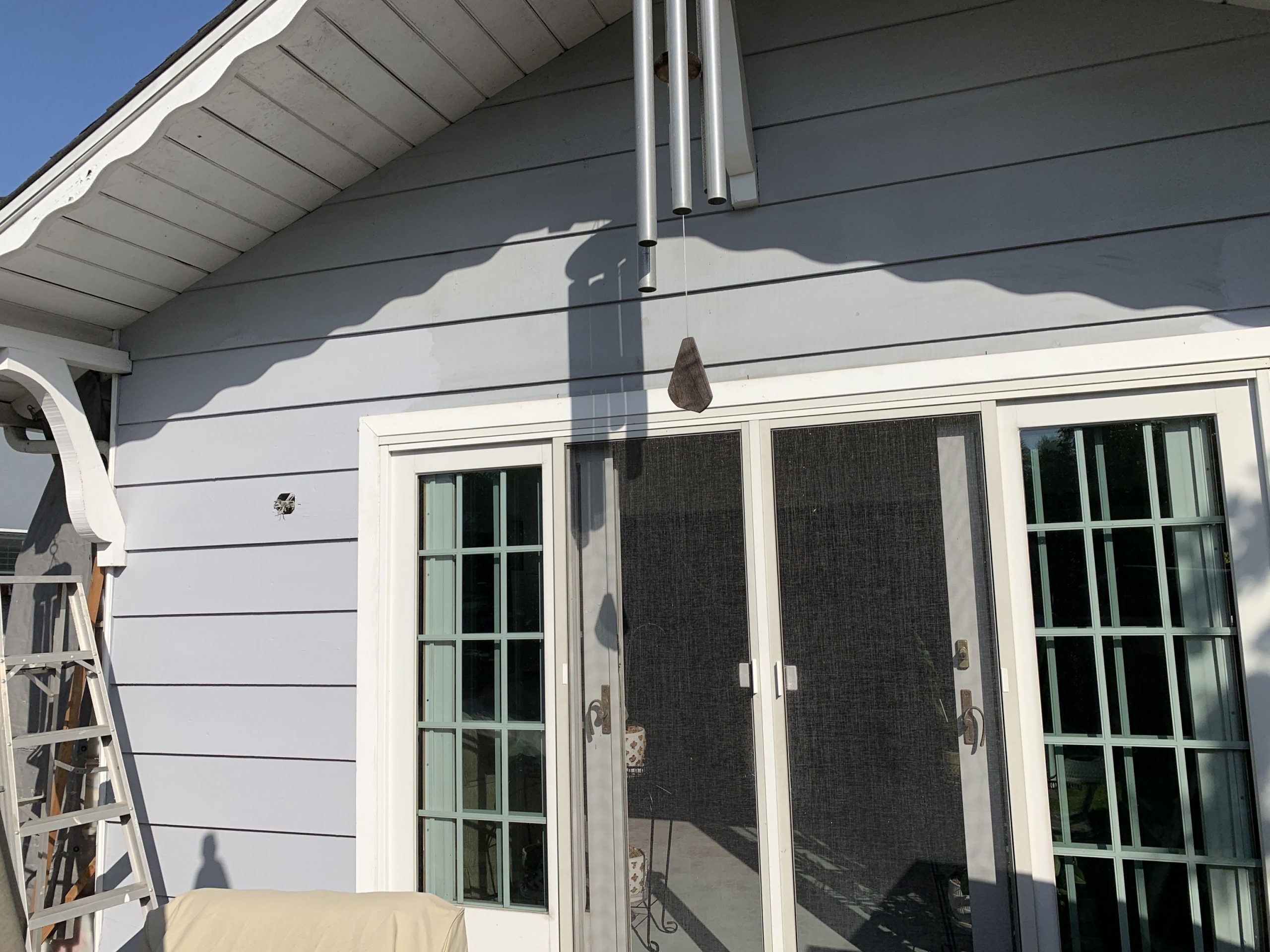 I painted up to 8 feet and then decided it might be time to call Zack or Joe to help with the taller areas.

At my age, I get dizzy, getting out of bed.  I am going to try the twelve-foot ladder in the morning, and if I don’t have to go all the way to the top of the ladder, If I don’t have to bother Joe or Zack, that would be a good thing as their plates are full already!

Throughout the day, Colleen and I exchanged Bat Phone calls as she found a series of pictures of our family and was putting information about the photos into a super extensive genealogy database she maintains.  Sometimes I wish she would stop finish old photographs, for obvious reasons. 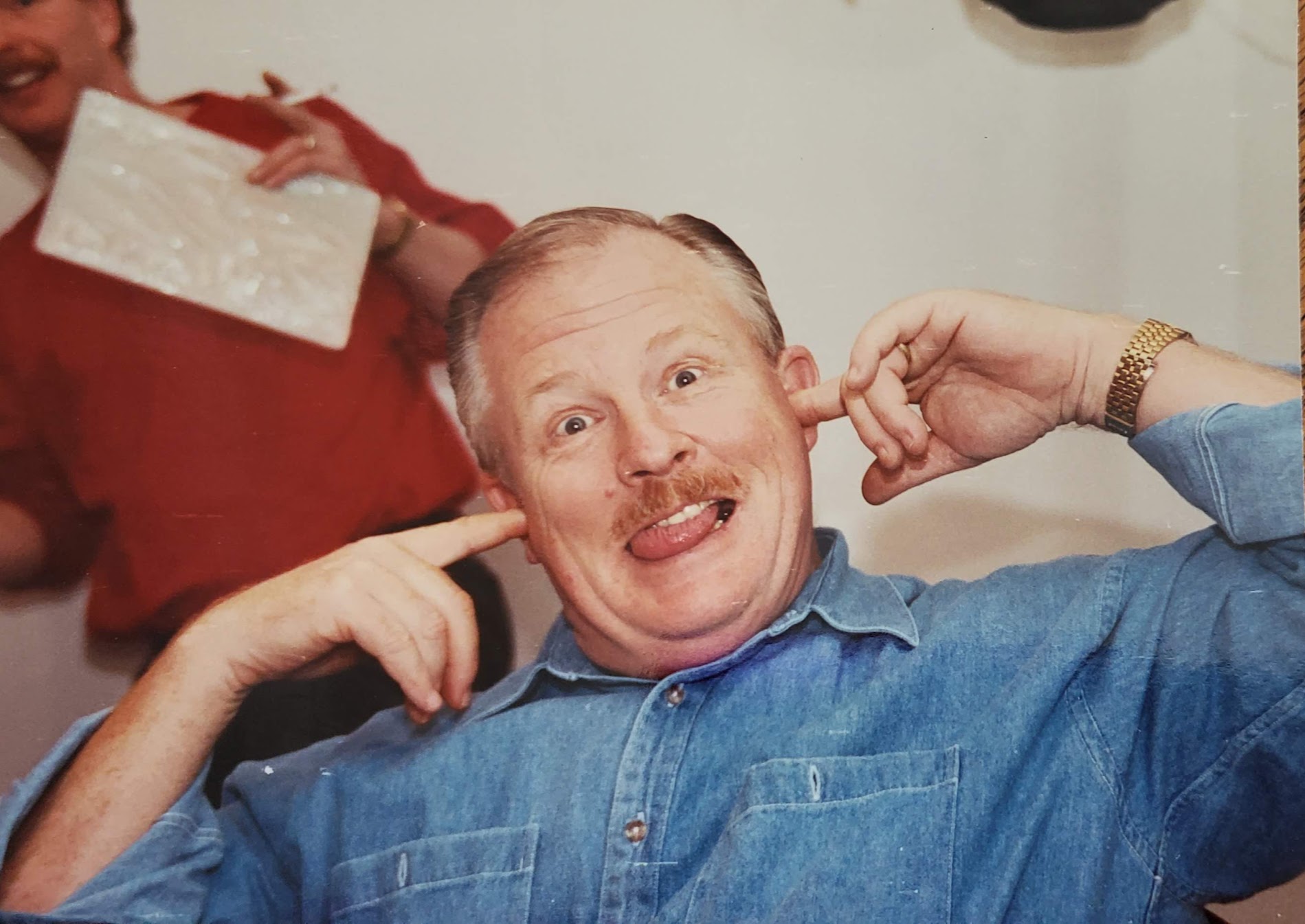 What was I thinking (or not thinking)? The photo was 20 years ago, and I am wearing the same shirt today to work and paint in around the house!

It’s my grandson Jon’s 31st birthday, so we decided to Zoom with him.  The whole fam damily  (not a misspelling, just a play on words) was there, and we all sang to him at the same time.  It was truly frightening!

We were here to party, and we were being watched. I am sure Sue was there in spirit! 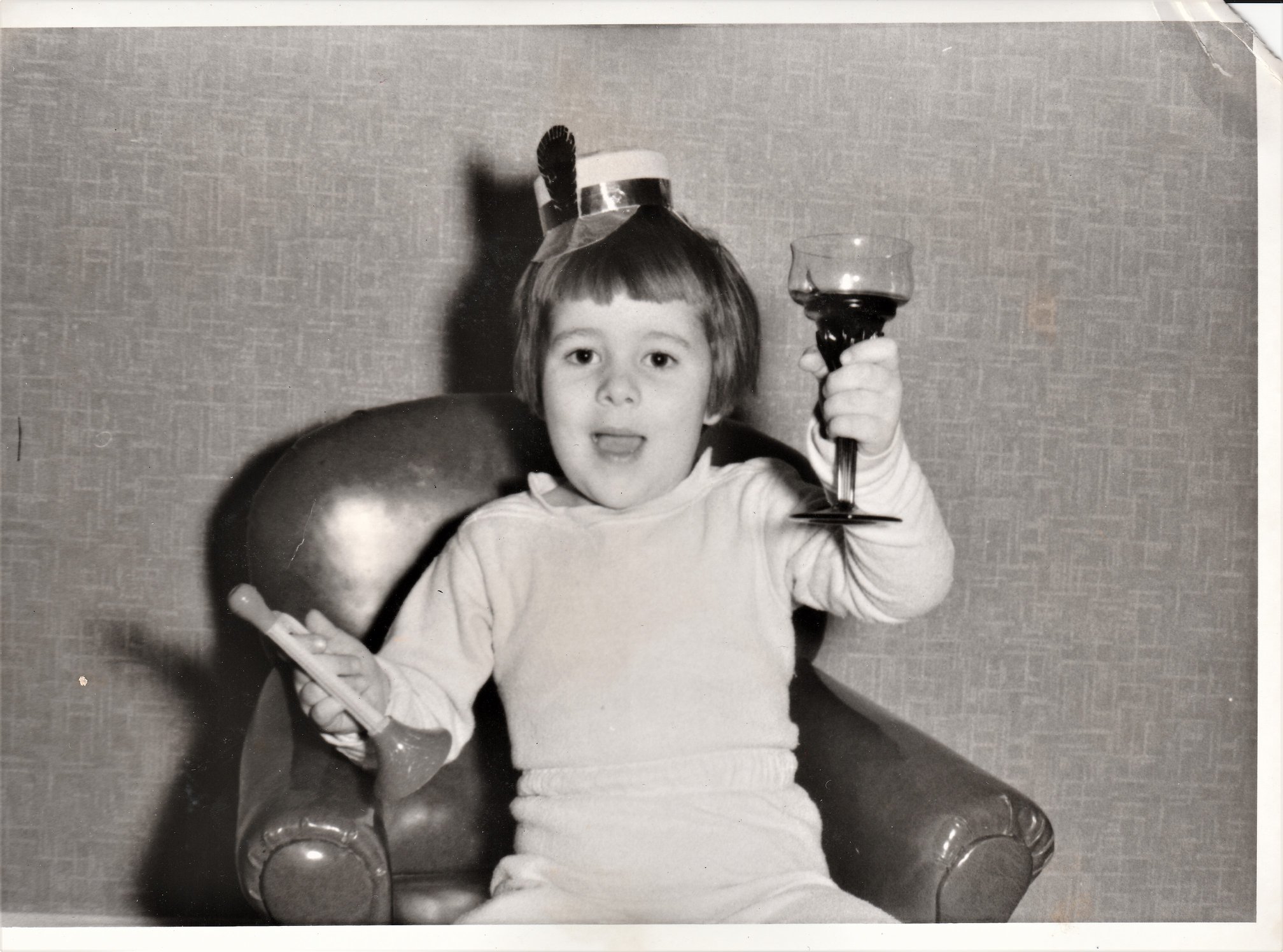 Sue was always up for a party!

Zoom worked fine, and at one time, we had others joining in, but 6:00 PM here is dinner time and get the kids to bedtime. 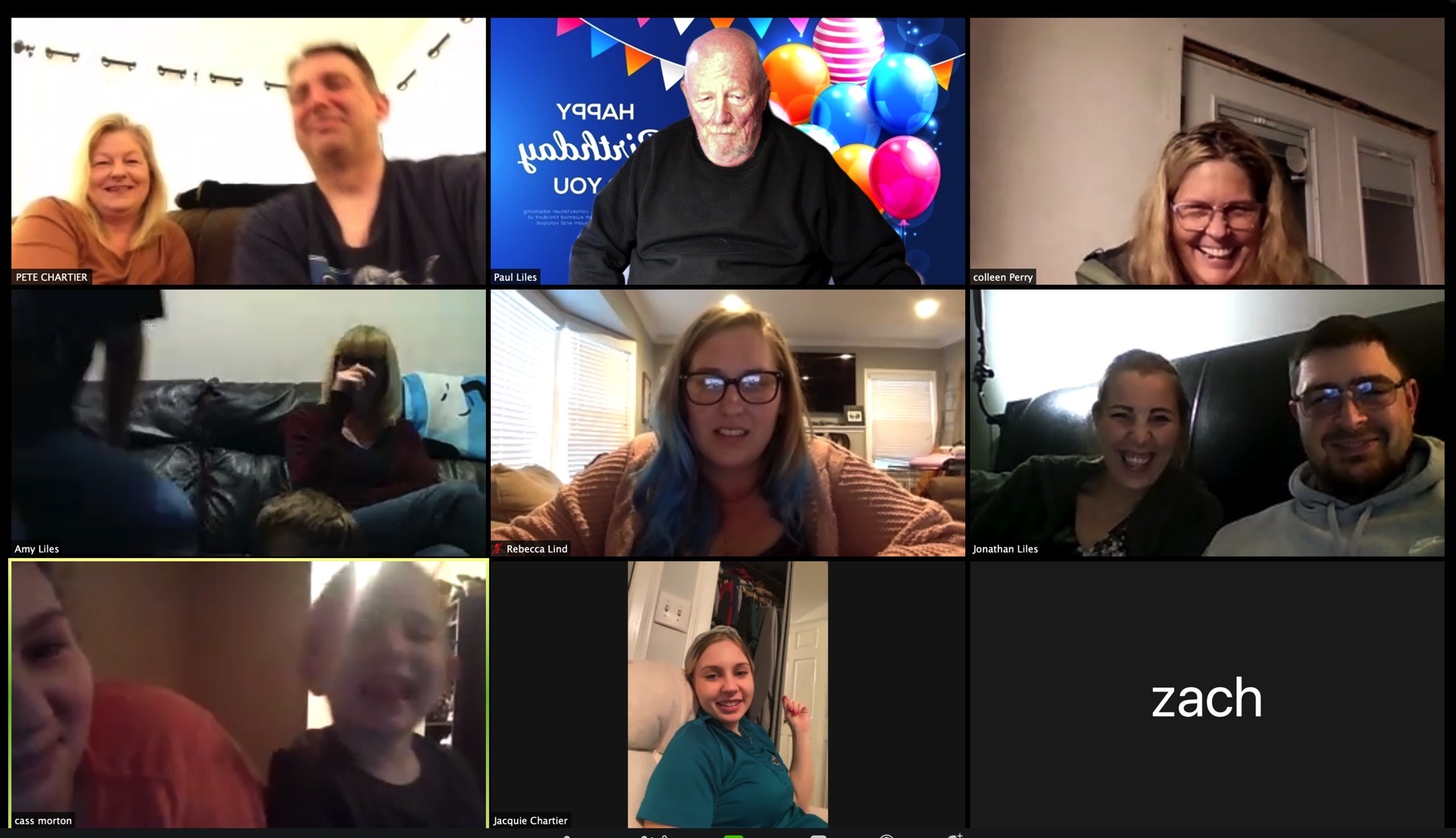 We had an hour meeting, and I took this just after my two oldest daughters departed, Robin and Michele. All had a good time! We also had Michele and Cassie with us this evening. 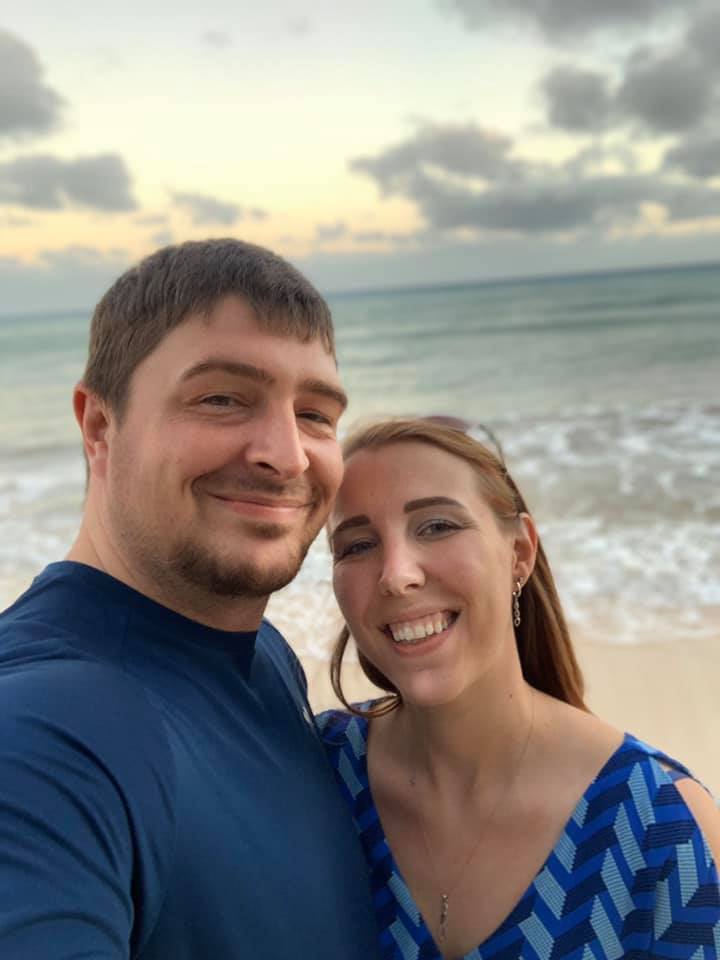 Jon and his beautiful bride, Sarah, lounging at the beach! Hard to believe he is now 31 years old! 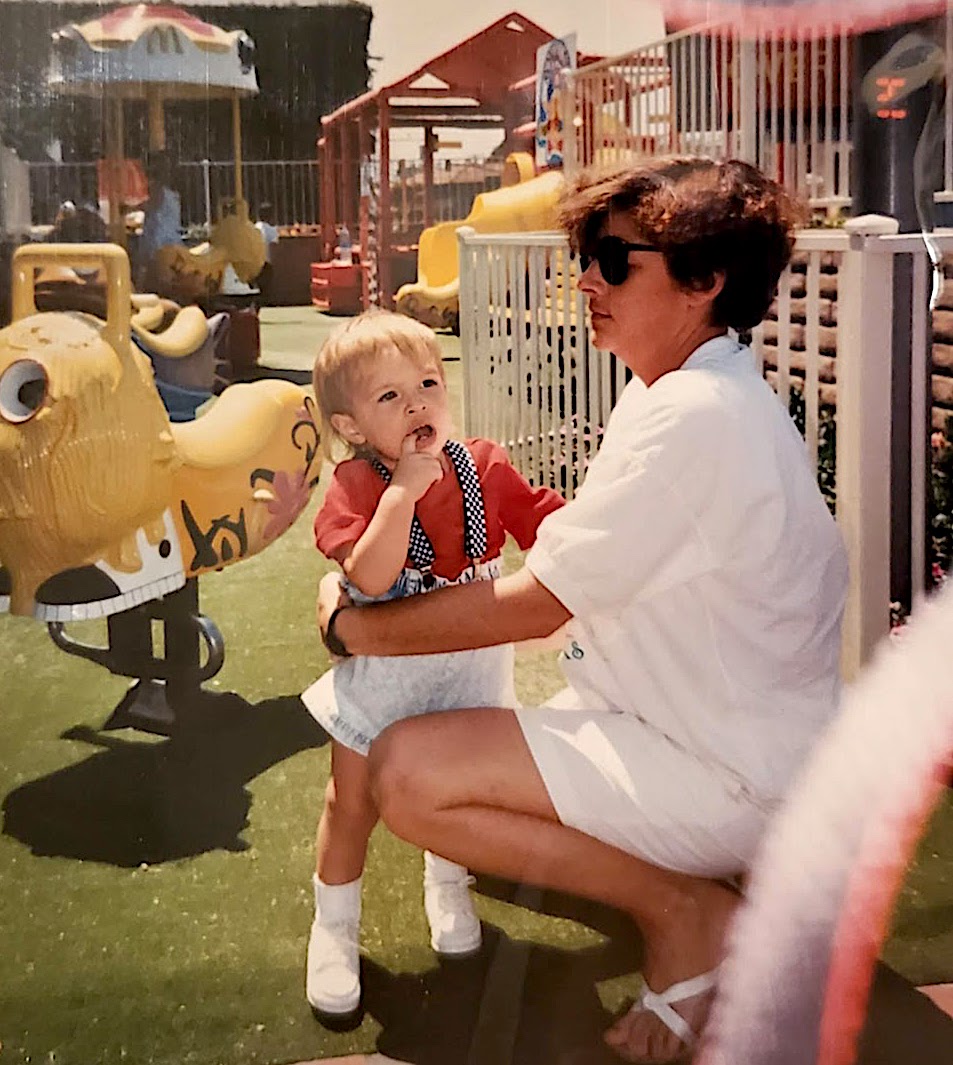 In the middle of the call, the Earth shook, literally. Per a Facebook post: ” Colleen Suzanne Perry > The family was on Zoom, and my Xhubby (ex-husband) and his wife, Lisa,  in San Diego felt it first then my sister Robin felt it in Corona, then my nephew Zack in La Habra then my dad in Los Alamitos.  My brother’s family never felt it in La Mirada. but none felt it at the same time.” 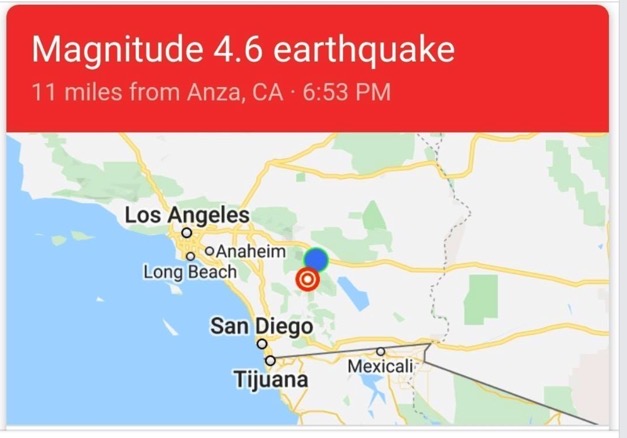 The Earth quickly got our attention!

The call ended at about 7:10 PM, and we all left for higher ground!  I headed for the TV in the living room and watched a little of “Tales From The Loop.”  I am not sure it is going to make my mandatory watch list.  A bit too slow for me. Summary: The townspeople who live above “The Loop,” a machine built to unlock and explore the mysteries of the universe, experience things previously consigned to the realm of science fiction. 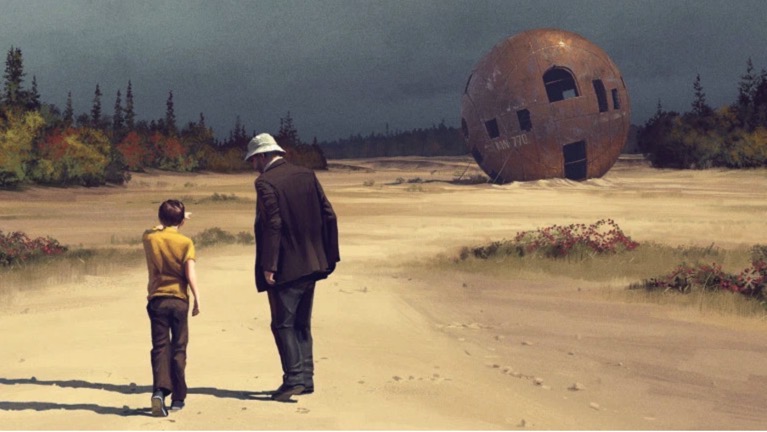 Interesting and thought-provoking but slower than needed to be!

After thinking about the earthquake, I called Lee (my high school girlfriend) in Lake Elsinore and made sure all was well with her.  She felt the quake, but as she said, “As a California Girl, it was no big thang!”.  By 10:00 PM, there had been over eight quakes of magnitude 3,0 or over.  The seismic activist gives a new meaning to “Shake, Rattle, and Roll.”

I finished off today’s diary and hit the sack at 10:04 PM after making sure my flashlight batteries were changed should the Earth decide to shake some more.  Tomorrow I plan to paint an accent wall in the master bathroom and finish off the front of the living room and perhaps event the front of the garage.

When will we get back to dancing?  I thought about dancing with Sue as I fell asleep.  It was my favorite thing to do, have her in my arms moving around the floor and enjoying the wonderful company of our dear friends and family.

Posted by Cristian Dacci Pessuto on Wednesday, May 11, 2016

Just an old retired guy trying to finish out my last years on this planet. I lost my best friend and wife in early 2020. I was blessed again by reconnecting with Dr. Mary Côté, a long-time friend. Mary and I got married July 28th, 2021, and are enjoying life together and plan to spend the rest of our lives being a blessing to our friends and family.
View all posts by Paul →
This entry was posted in Cooking, Family. Bookmark the permalink.