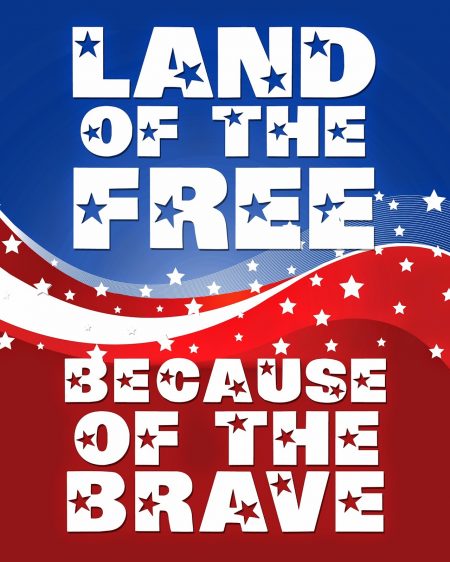 We love our country!

We stayed mostly home except for Paul taking his morning walk and going over 500 miles this year!!!

Random Memories: My father was 40 when WWII started and he tried to get in but was turned down.  When I was in my teens, I asked Dad why he was not in the service.  He said it was due to “flat feet”.  I thought he was kidding until 60 years later when I got a bad case of plantar fasciitis.  Damn it hurts.

Identified risk factors for plantar fasciitis include excessive running, standing on hard surfaces for prolonged periods of time, high arches of the feet, the presence of a leg length inequality, and flat feet.

Well, dad worked in a dime store and standing was constant, the floors were always hard, he had very high arches (as does Paul Junior) and Paul Senior had a form of polio as a kid and one leg was shorter than the other!  The upshot was, Paul Senior had plantar fasciitis or what was fondly called “flat feet” in the 1940’s. 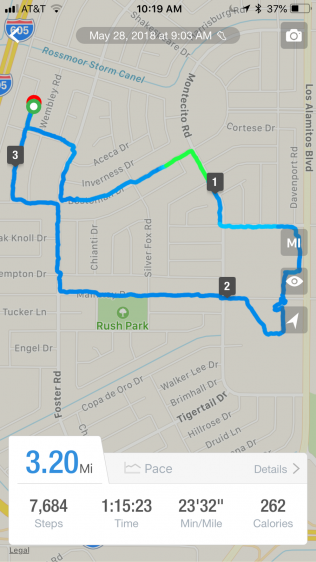 Made it over 250 miles so far this year! 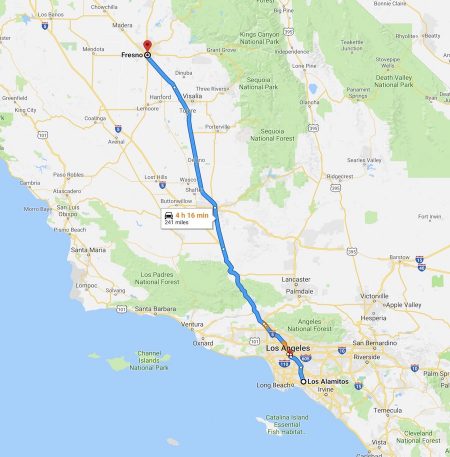 From Los Alamitos to Fresno is 241 miles!

The flags were out in full force with at least 50% of the neighborhood displaying the flag. Now we know where the liberals are!  Flags were large and small and even tied to bicycles roaming around the hood! 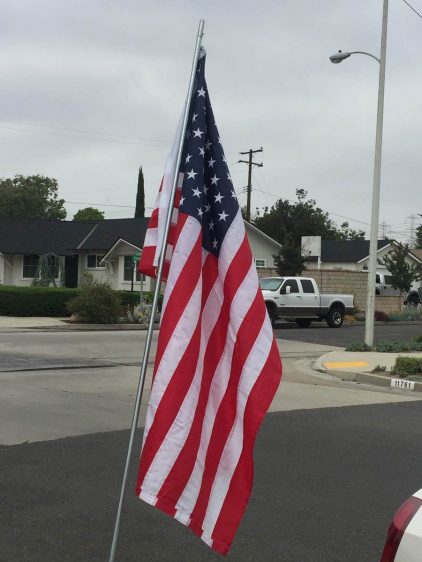 The slight breeze was perfect! The flags sounded great flapping in the breeze! 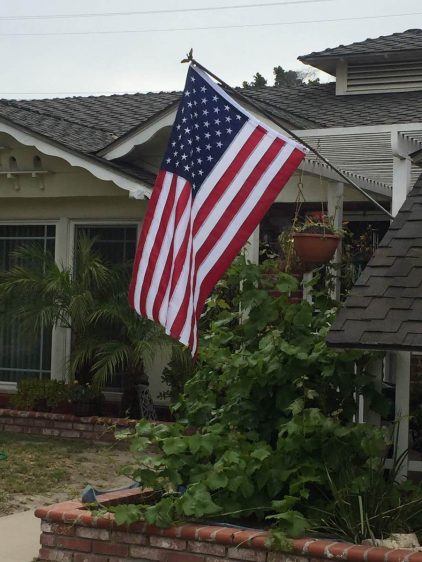 After getting home, Paul watered the garden as it gets mighty thirsty when the sun comes out!  The tomatoes are going wild! 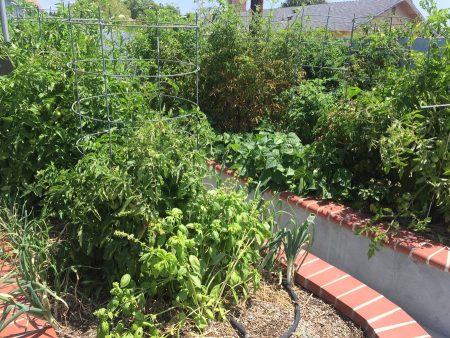 The garden she is green!

Hiding in the leaves are the start of several soon-to-be LARGE pumpkins!  Last year we had several in the 60-70 pound range! 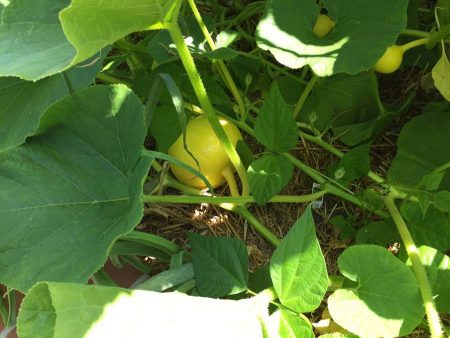 We are going to have pumpkins this year again!

Checkout the corn… getting pretty tall!  Another few weeks and we will have corn on the cob for dessert! 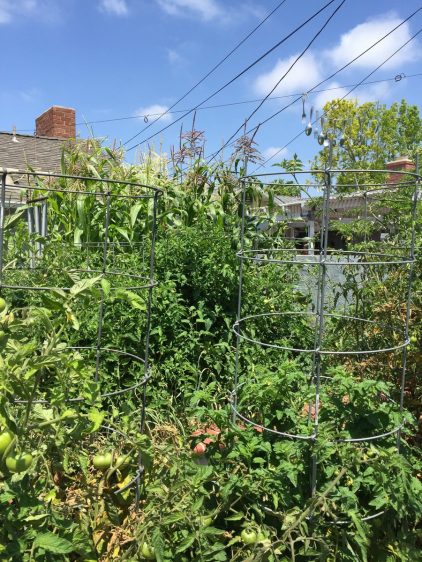 Damn near as high as an elephants eye!

Did You Know?
• An average ear of corn has 800 kernels, arranged in 16 rows.
• There is one piece of silk for each kernel.
• A bushel of corn contains about 27,000 kernels.
• Each tassel on a corn plant releases as many as 5 million grains of pollen.
• Corn is an ingredient in more than 3,500 grocery products.
• One bushel of corn can make 33 pounds of sweetener, 32 pounds of starch, or 2 1/2 gallons of ethanol fuel.
• Corn is the 3rd most important food crop of the world measured by production volume, behind wheat and rice. In terms of acreage planted, it is second only to wheat. 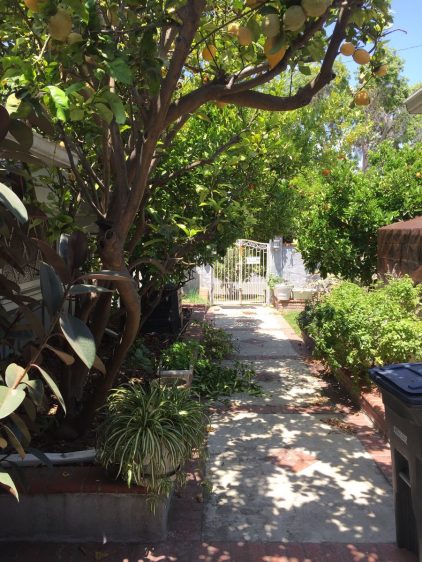 We could open a large lemonade stand with the crop that comes on this tree! 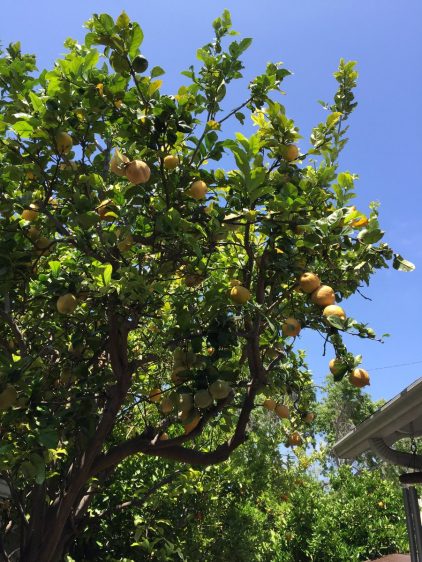 We could open a lemonade stand!

In the late afternoon we got cleaned up and headed to Malarkeys to meet up with Irene and we also got the Duda’s, returning form Europe, and the Rodecker’s.  We all watched the sunset and got a full update on the European trip!

Just an old retired guy trying to finish out my last years on this planet. I lost my best friend and wife in early 2020. I was blessed again by reconnecting with Dr. Mary Côté, a long-time friend. Mary and I got married July 28th, 2021, and are enjoying life together and plan to spend the rest of our lives being a blessing to our friends and family.
View all posts by Paul →
This entry was posted in Family, Food and Wine, Friends, Walking and tagged Dining Out, Family, Friends, Malarkeys, Random Memory, Walking. Bookmark the permalink.