We played nine holes right after lunch and it was pretty good! We did some Happy Hour afterwords sitting on the patio and enjoying life. Chef was making beer can chicken and steak for dinner night and he offered Paul a sample…  It was delicious!

Did You Know? Beer can chicken, also referred to as chicken on a throne, beer butt chicken, dancing chicken and drunken chicken, is a barbecued chicken dish and method of indirect grilling using a partially-filled can of beer that is placed in the chicken’s cavity prior to cooking. The process adds moisture to the dish, and some believe that steam from the beer serves to steam the chicken from the inside and add flavor to the dish. Some people are avid proponents of the dish, while others have contended that the efficacy of using the beer is overrated, and that the science regarding beer can chicken is debatable. It has been suggested that the dish possibly originated in the U.S. state of Louisiana 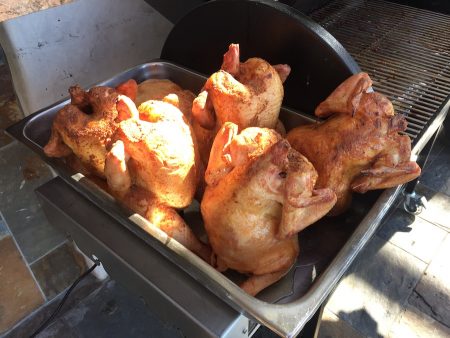 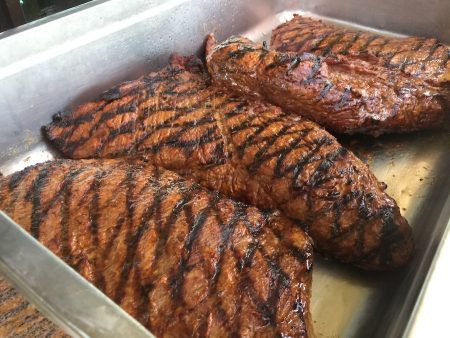 So tender… Loved the samples

After a bit, we departed for Patty’s Place to have a drink with the gang before heading home.  Paul just had to have the grilled prawns but he was smart, when he placed the order he had half the order put in a to-go-box!  Kept the calories down for the day!

We returned home and watched a movie and a little Frasier.  Gets funnier every episode.

Just an old retired guy trying to finish out my last years on this planet loving my best friend and wife, having fun, learning, and passing on helpful things to others.
View all posts by Paul →
This entry was posted in Food and Wine, Friends and tagged Dining Out, Golf, Happy Hour, Old Ranch, Patty's Place. Bookmark the permalink.
Powered by Maribol IMDB Plugin