“The reality is that you will grieve forever. You will not ‘get over’ the loss of a loved one; you will learn to live with it. You will heal, and you will rebuild yourself around the loss you have suffered. You will be whole again, but you will never be the same. Nor should you be the same, nor would you want to.” — Elisabeth Kubler-Ross

Mid-year, and we used to celebrate the entire month of July because it was Sue’s “Birthday Month.” We put ourselves into overdrive and were out and about every day.  This year seems so strange because I am not out and about.  I remember Catalina, the Sawdust Festival, Laguna Arts Festival, wine tasting trips, the county fairs, the train trips.  This year, I stay home and just delight in remembering the thirty-years we had together.  She brought enough joy to least my lifetime, and I sometimes just hurt that she is not here to share.  I love you, Sue, and always will! 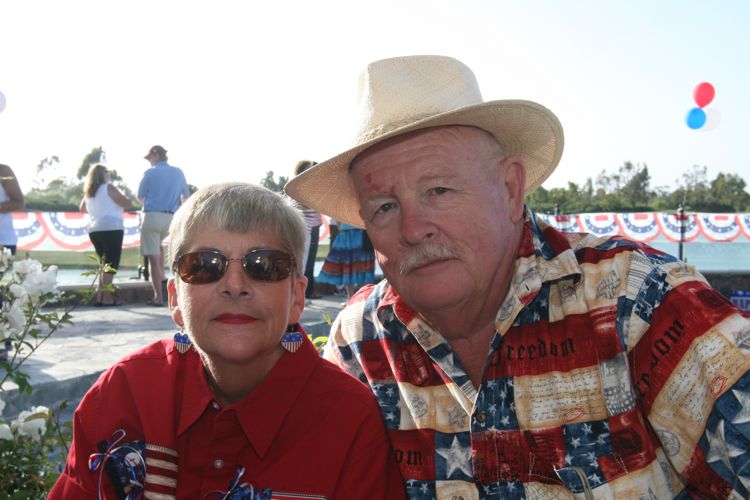 We are at Old Ranch Country Club with many of our family and friends. She was ready to celebrate!

I was up at 5:30 AM, roaring to go.  I went through a pile of sheets and blankets and put them into another packing box.  I moved several cartons from the master bedroom closet, including the new one,  to the outside as I decided to give them to the Salvation Army.  Now I have more room.  I kept the single-bed sheets, but all the old doubles will be gone soon.

This morning I took the long walk to the mailbox and put in my estimated taxes.  I drug it out to the last minute, but I had to do it.

I whispered, “Let’s GO,” and the Silver Lady started right up, turned on her air conditioner, opened the door, and was raring to go, anywhere!  Of course, we went to Lowe’s as I needed a 3/4 inch male hose bib.  An exterior spigot (also known as a “shut-off valve,” “hose hydrant,” “hose bib,” or “silcock”) is what the hose connects to get water.

I know that store pretty well now.  We were back home in 30 minutes, and the hose bib was in place.  I also got several packing boxes as I plan to send a lot of Christmas decorations to Colleen and get my Christmas boxes down into the single digits (there are almost forty boxes now!) 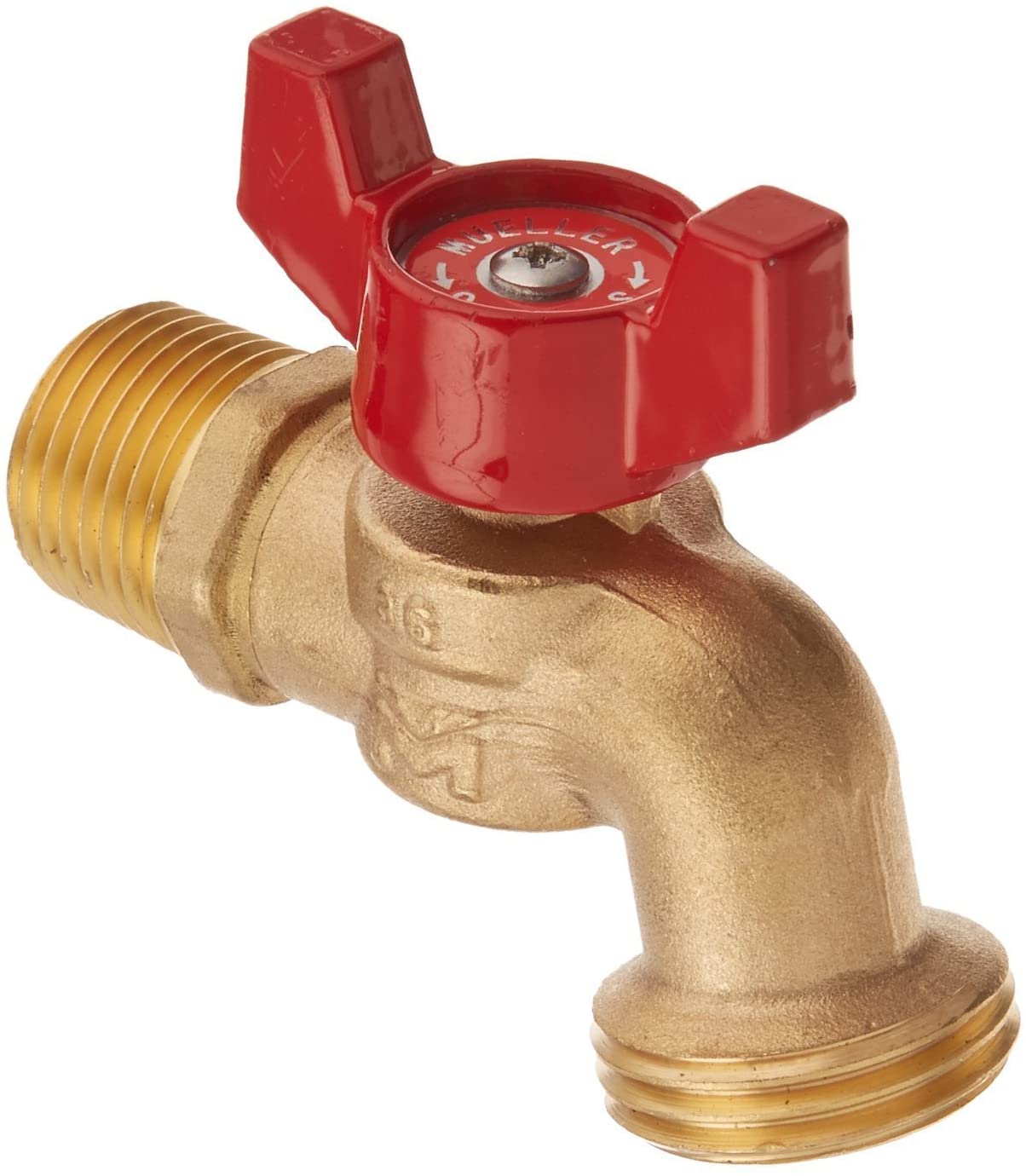 I got a call from Mike, the bandleader from “9 Carat Gold” and they were looking for a place to practice.  I thought of Old Ranch and the Himalayan Grill.  Old ranch washed out because of the reconstruction.

So, I invited the guys to the Himalayan Grill for lunch, so I (we) could talk to the boss.   The owner did not understand 1940s music until I played “Blue Champagne” on YouTube.  He finally realized it was not a “rock group” with noisy guitars and drums. 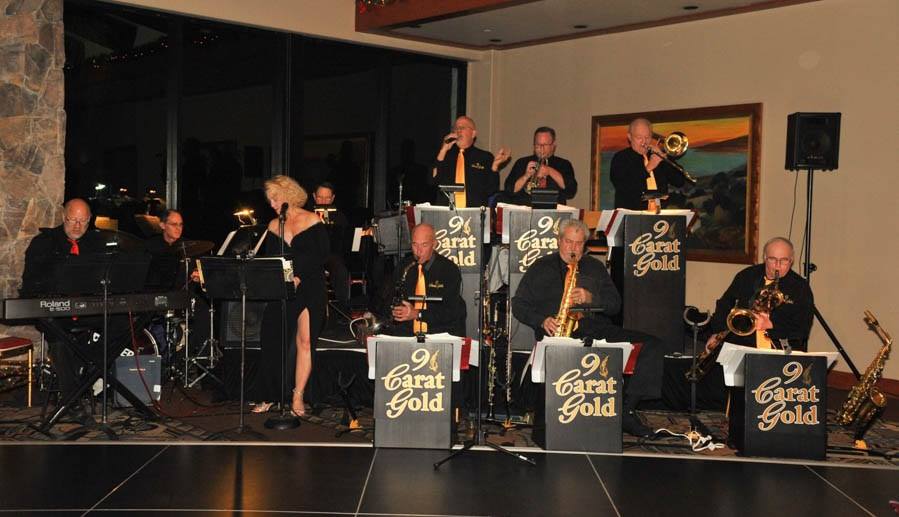 Success, they will be practicing there starting Tuesday!   I will go the first time, and then after that, I will invite others to listen and dine. Yeah! I love it when a plan comes together!

I got to the restaurant a little early to make sure they would be open as you can’t tell with all this nonsense going on around us. So, what to do for forty-five minutes?  Beer was the answer. 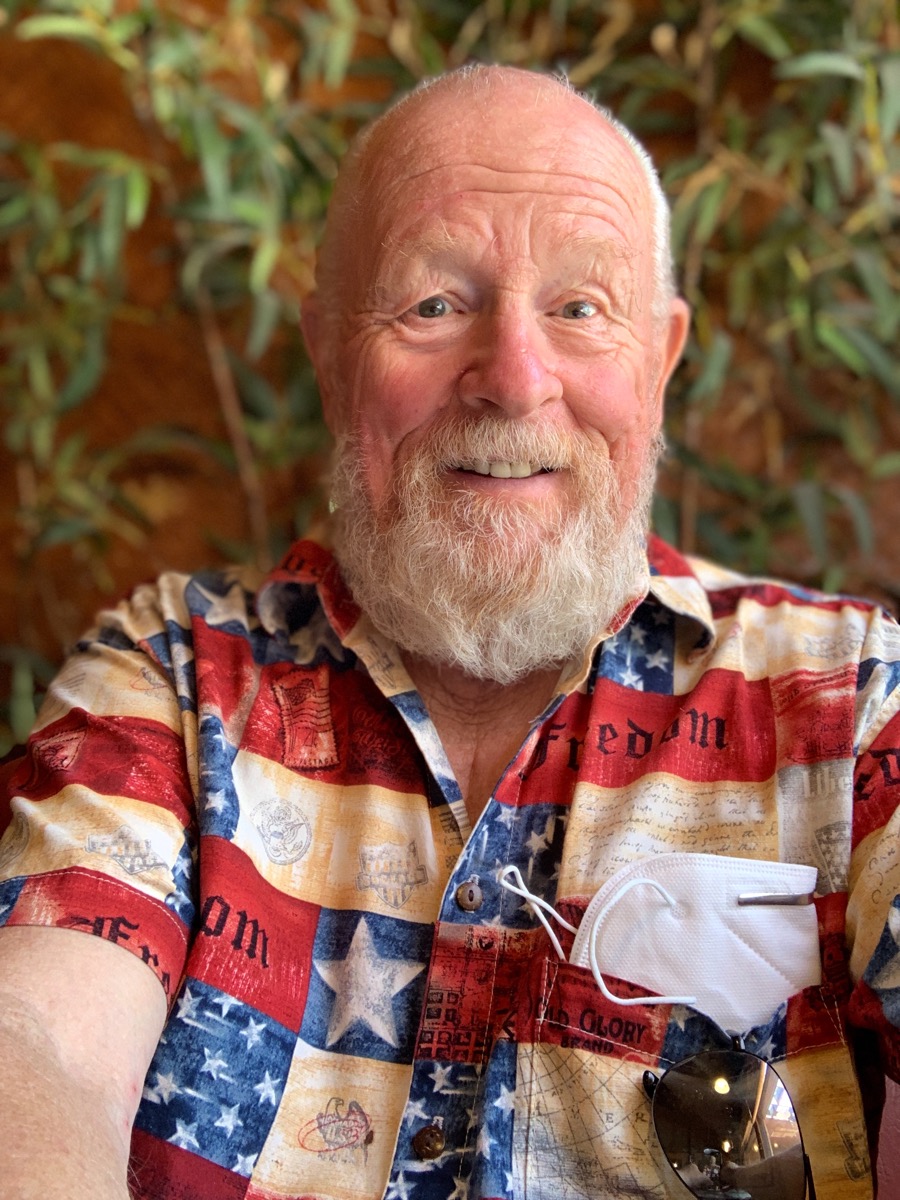 It’s finally beginning to act like Summer.  The temperature was 82 today, and that was perfect.  I am happy I watered the corn today. 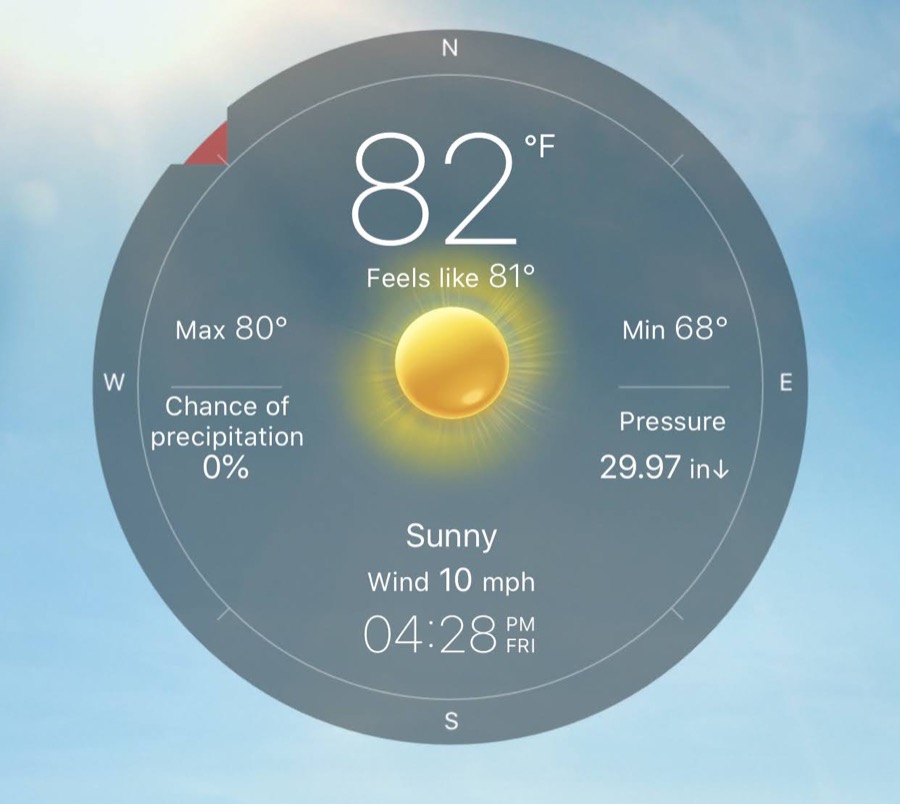 Mike came in first traveling from Long Beach  Mike and I chattered about things for close to thirty minutes before Chuck showed up.   Mike knew the Himalayan Grill when it was Sams Seafood.  He played here several times.  The backroom is always a surprise to people as it can hold 200 or more people and comes complete with a small stage. 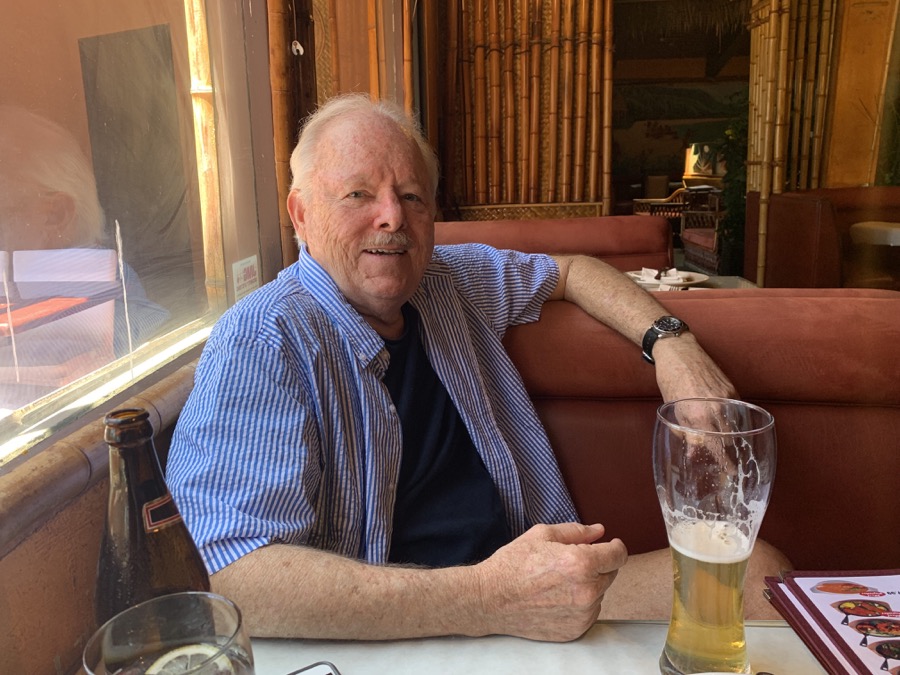 Chuck showed up and is doing well.  Below he is showing his scars from the recent motorcycle accident where he broke his leg in two places.  Yes, he rode from Downey to the beach using the side streets, no more freeways for him! 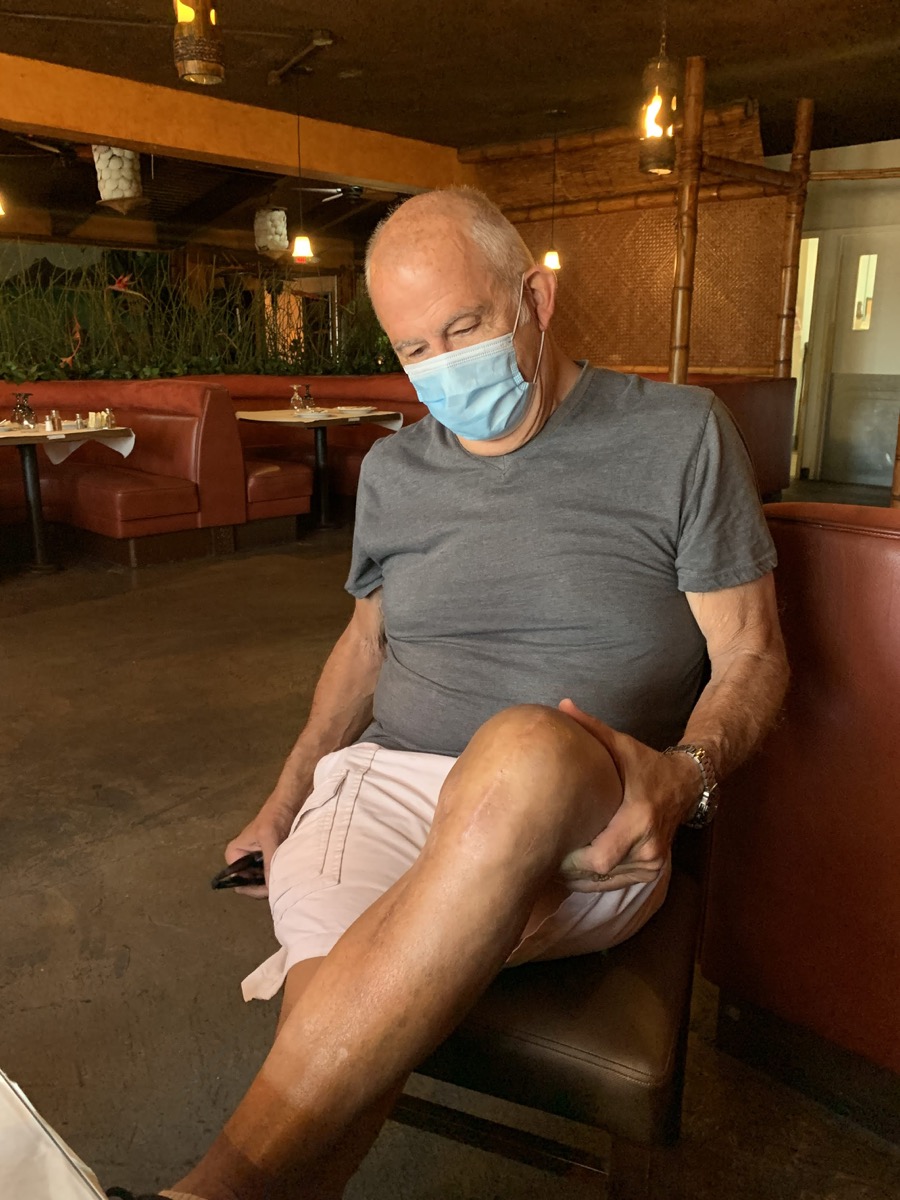 The scars are going away slowly.

My phone was about to die, so I gave them a number to call; it was Jan Mongel!  We all chatted with her for a while.  Jan sponsors the Phoenix Club and knows the guys well. 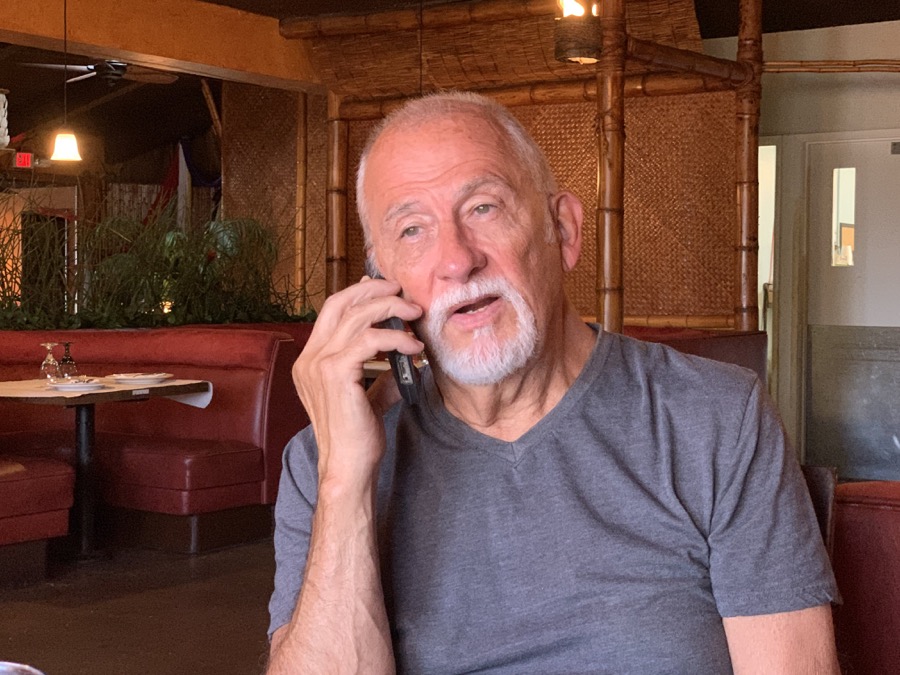 A call to Jan Mongel. 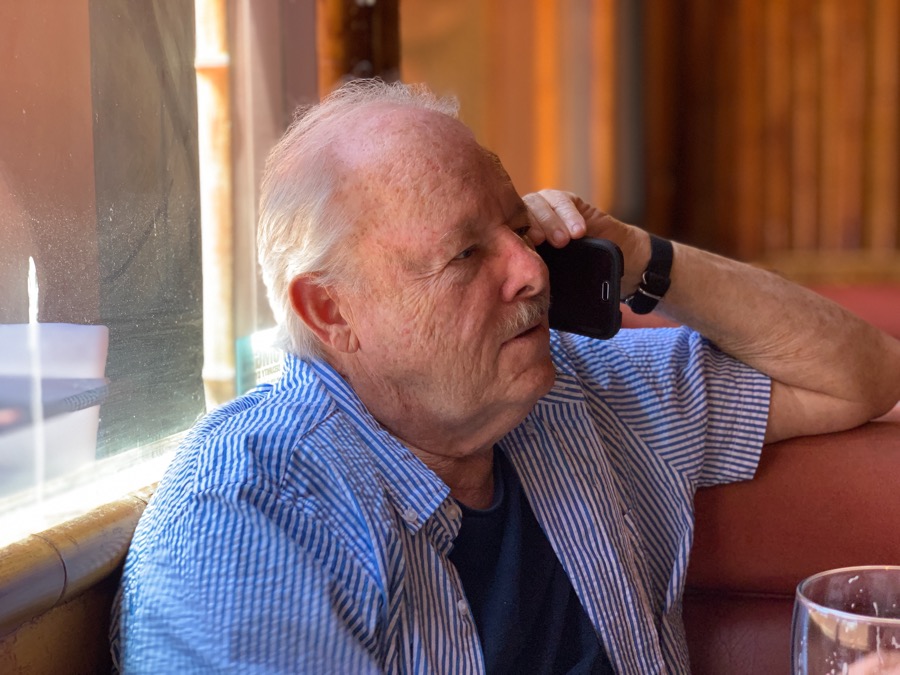 Hello! Jan? (We passed the phone around)

When it came to ordering lunch, they were not sure as they had not had Indian before.  I recommended the mild Chicken Tika for their starters. 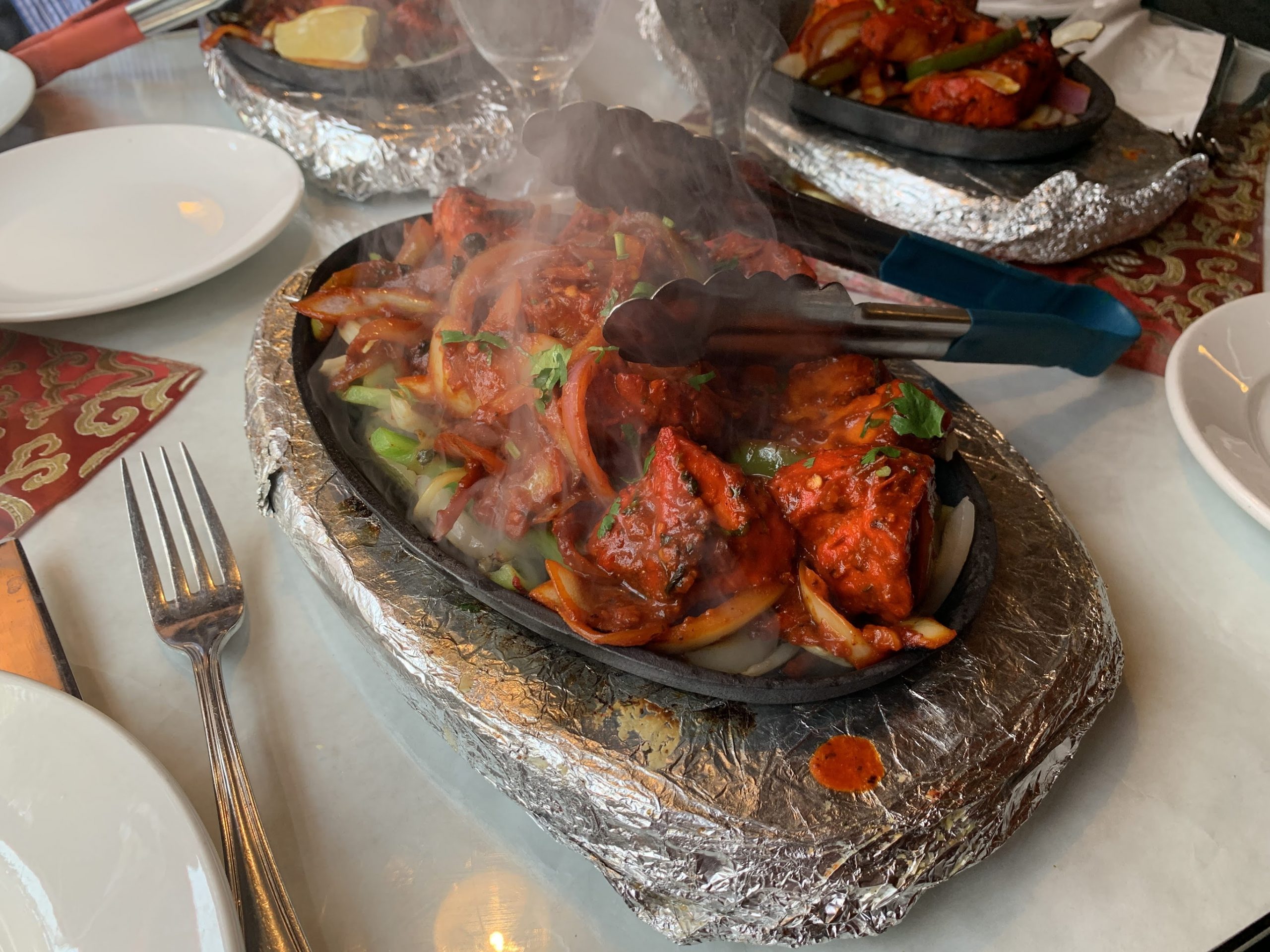 Did You Know? It is traditionally small pieces of boneless chicken baked using skewers on a brazier called angeethi after marinating in Indian spices and dahi (yogurt)—essentially a boneless version of tandoori chicken. The word tikka (Tike in Turkish, and Tik? in Azerbaijani) is a Hindi and Urdu word and means “bits” or “pieces”.

I had mine fifteen on a scale of ten.  It was so good.  Then I did a bad thing!  I had two large Indian beers.  OMG, I was so sleepy by the time I got home I laid down and died on the spot.  I have not had two beers in thirty years!  It was hot, but that was no excuse.  After getting home, I recalled that Old Monk, Indian beer, is eight percent alcohol. 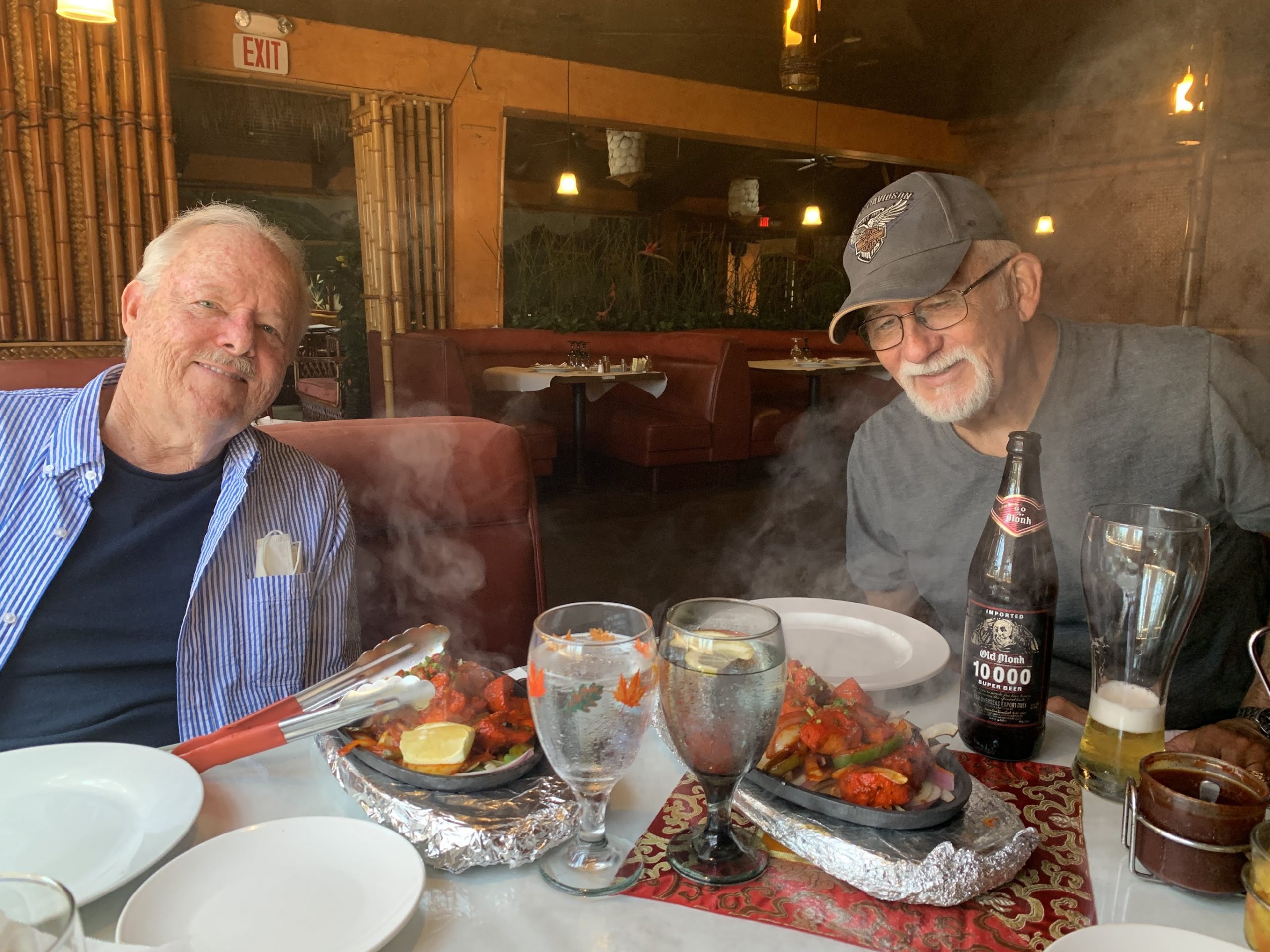 The guys really enjoyed the meal and will definitely come back for more, no more fear of Indian food!

Bob got here and worked for three hours before I woke up.  He said he checked my breathing to make sure I was OK.  I just don’t drink anymore, so the two beers and the warm day had their effect on me!  That means I will be up all night long!

I finally woke up about 7:00 PM and wandered outside into the garage and the garden.  I watched the president’s speech at Mount Rushmore.  The address was impressive. 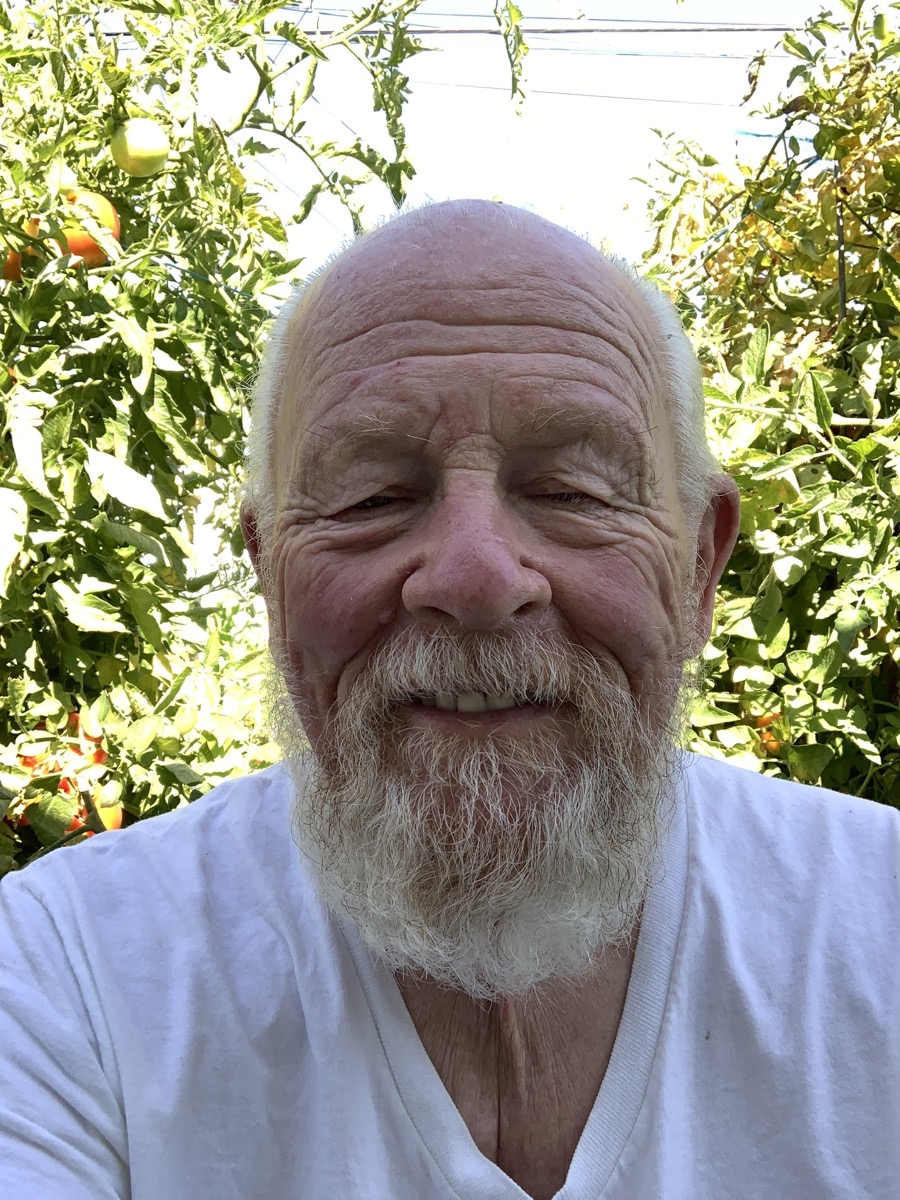 I am now in the yard working after my nap.

The bathroom is coming along nicely.  The flooring has been started.  Half was done, and it is drying so we can begin to walk on it and then finish the other side.  The small yellow devices keep the spacing exact so that grouting will be easy to put in. 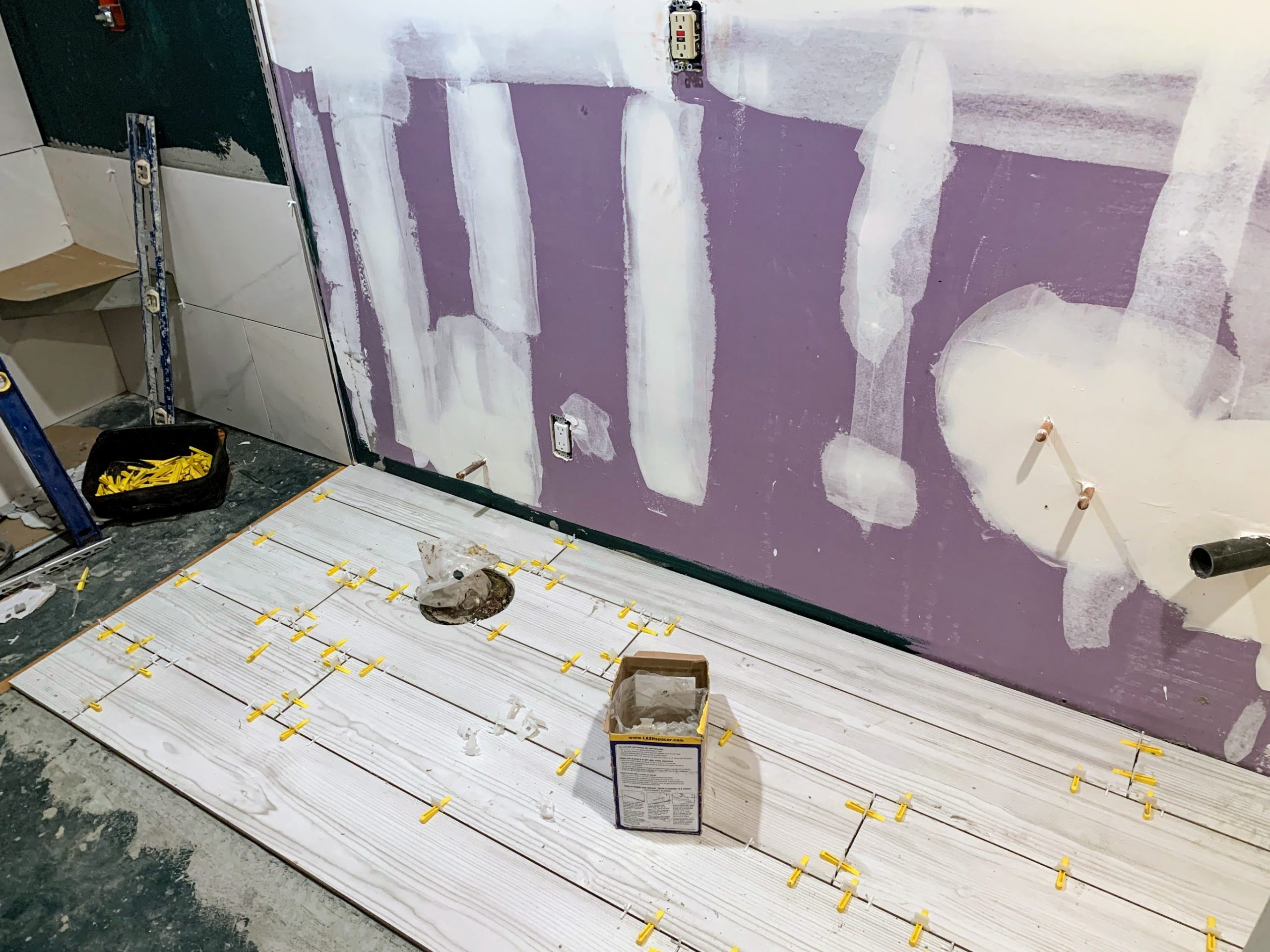 The flooring is ceramic tile and impervious to water!

The walls are coming along nicely. Tomorrow will see the shower tiling finished.  It is exciting to see the progress.  The seat is now built into the wall.

Did You Know? The ancient Greeks were the first people to make their form of a shower, which sprayed bathers with water. Their aqueducts and sewage systems made of lead pipes allowed water to be pumped both into and out of large communal shower rooms used by the wealthy and ordinary citizens alike.

What we think of as the shower today was invented in 1767 by William Feetham, a stove maker from Ludgate Hill in London. His shower contraption used a pump to force the water into a vessel above the user’s head, and a chain would then be pulled to release the water from the vessel.

The shower didn’t come into common usage until the late twentieth century as people realized showering is a far quicker and more hygienic way of washing than having a bath. 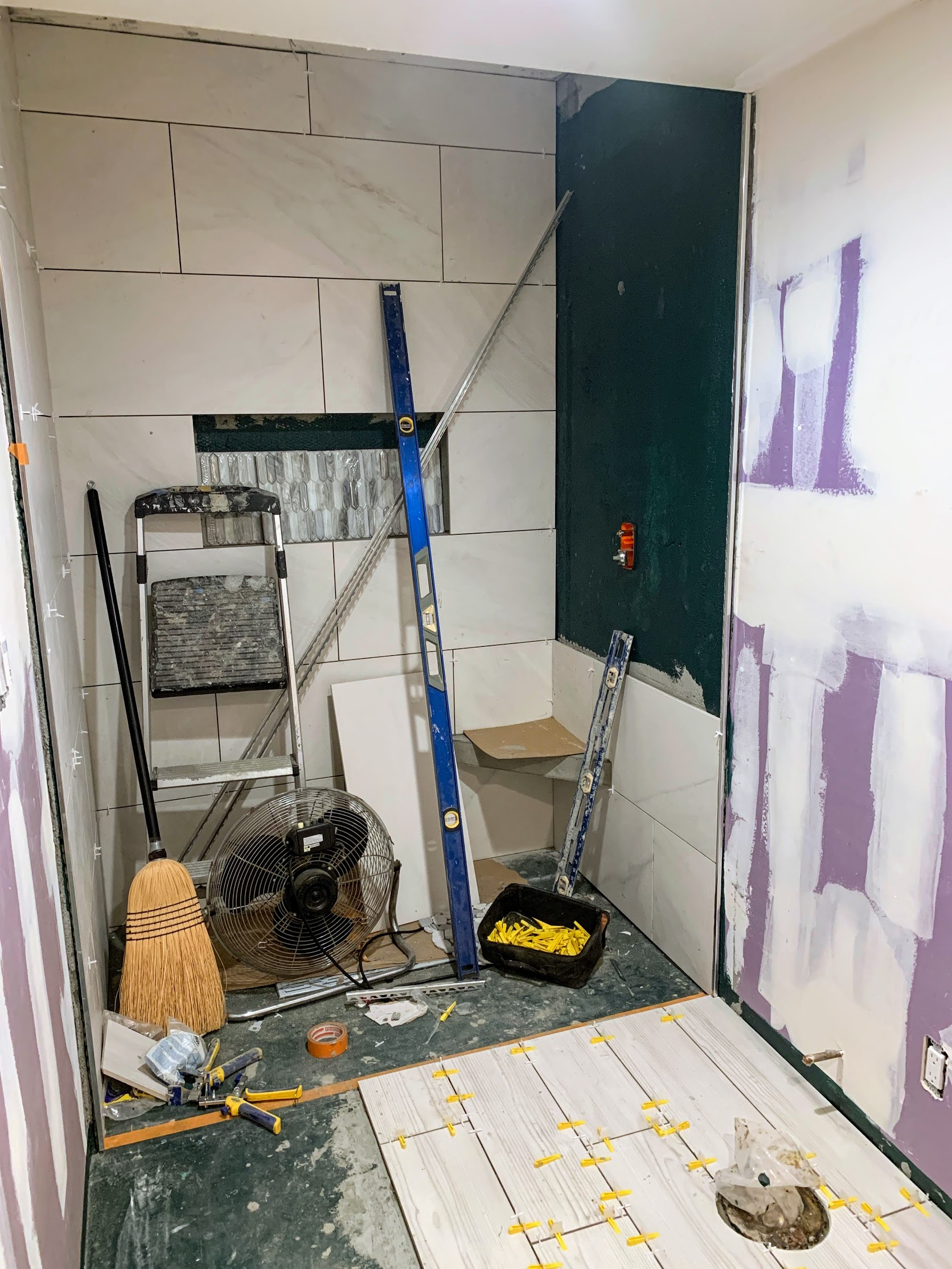 The wall will be finished tomorrow. The top of the shower has its fan/light combination, and there is a “rain head” also at the top!

I watch President Trump at Mount Rushmore.  Damn, he was good and said all the right things.  I love that guy! 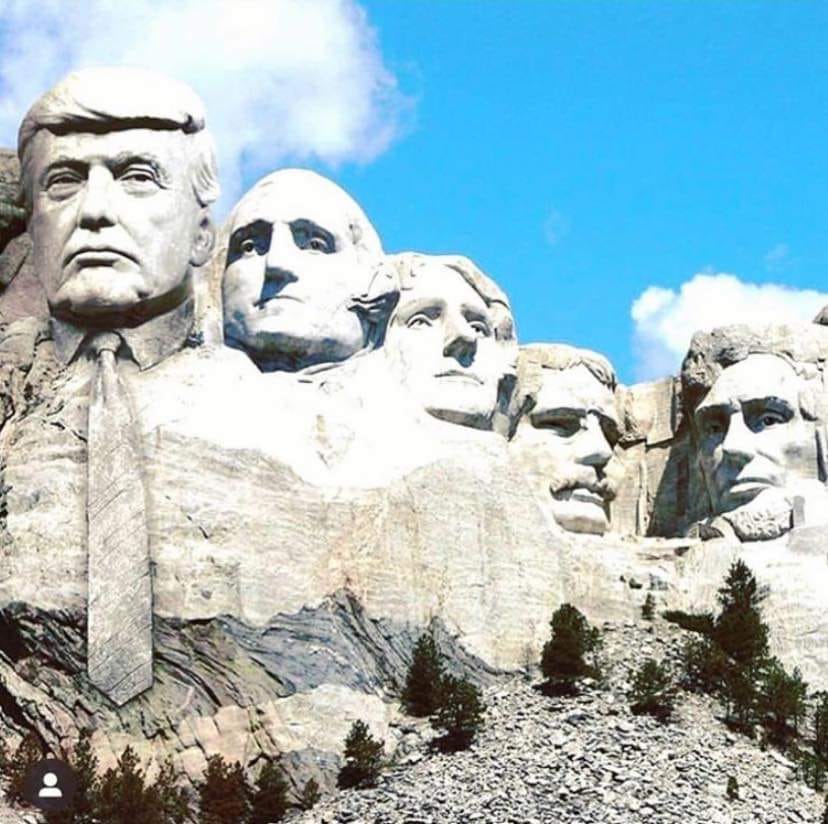 Trump is an amazing man, just like the other four!

At 9:00 PM, I was again tired, so I hit the sack as tomorrow is going to be a busy day. I watched two episodes of “Hanna,” which was interesting.  Summary: Hanna is a 15-year-old girl living with Erik, the only man she has ever known, as her father, in a remote part of a forest in Poland. Erik once recruited pregnant women into a CIA program, code name UTRAX, where the children’s DNA was enhanced to create super-soldiers. When Erik falls in love with Johanna, Hanna’s mother, he rescues baby Hanna, and they flee. The CIA then orders their on-site agent, Marissa, to shut down the project and eliminate all the babies. 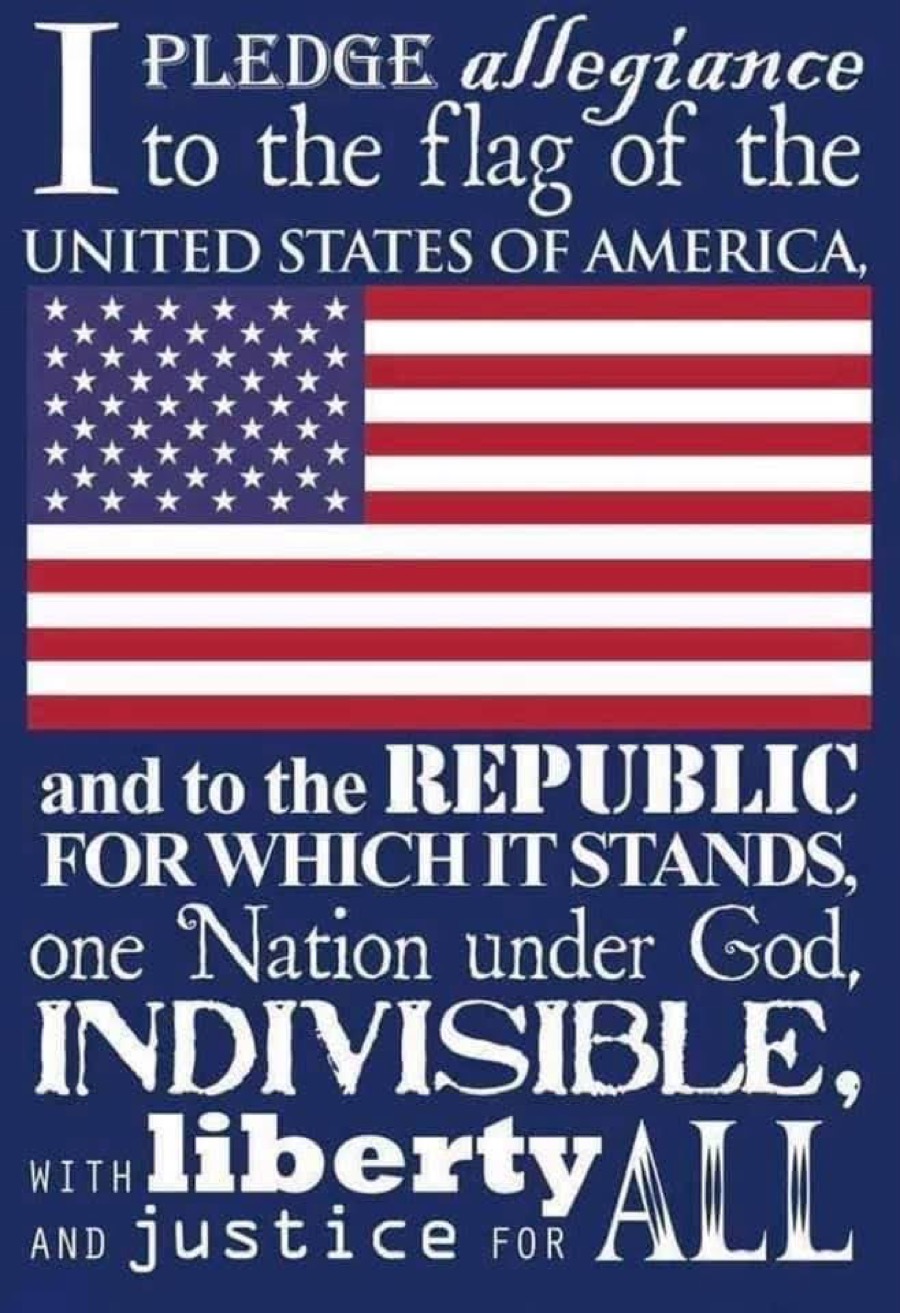 More people ought to believe.

Just an old retired guy trying to finish out my last years on this planet loving my best friend and wife, having fun, learning, and passing on helpful things to others.
View all posts by Paul →
This entry was posted in Dining Out, Friends, Working Around House. Bookmark the permalink.

2 Responses to Almost The Weekend!