It’s Thursday And The Week Is Speeding On By!

It’s never a good idea to keep both feet firmly on the ground. You’ll have trouble putting on your pants.

We were up at the crack of dawn as Mary had a Zoom meeting at 7:00 AM.  The mating of the iMac’s finished about 6:00 AM, and I finished the setup.  The solid-state drive did make an amazing difference, and I plan to take the “old iMac” down to the store and put in 4 GB of a solid-state drive; that would speed it up!

We plan to walk Five Miles this morning as he feels bad.  We had to lock him out of the office because he bugs us on the PC/iMacs. 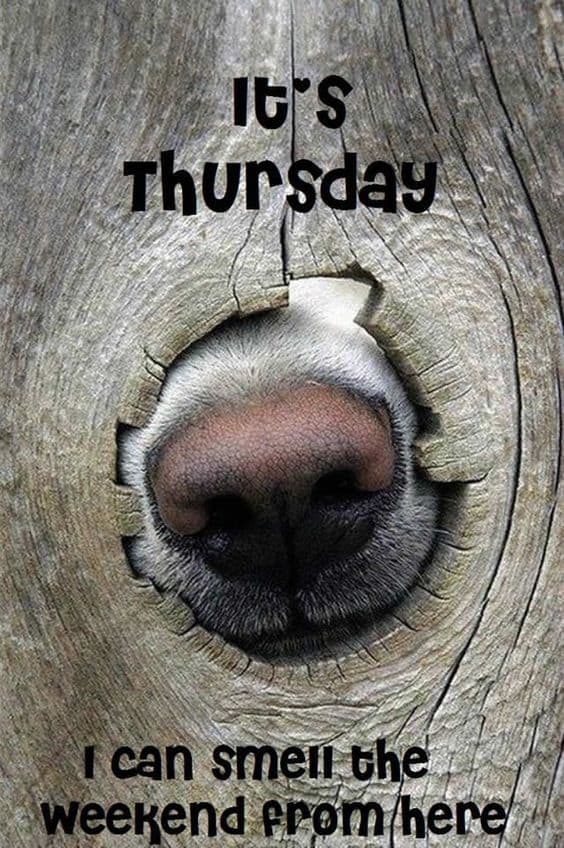 Mary got all her “greenery up,” and it looks really nice.  We diddled around all morning until we headed to the Elks Lodge for Girls Night Out.   Our handyman came by and hung some pictures, and we discussed how to best get electrical outlets in the wall so we could light up the China cabinets.

We are off like a herd of turtles and arrived 15 minutes ahead of schedule.  Mike was already there enjoying a large cup of coffee. 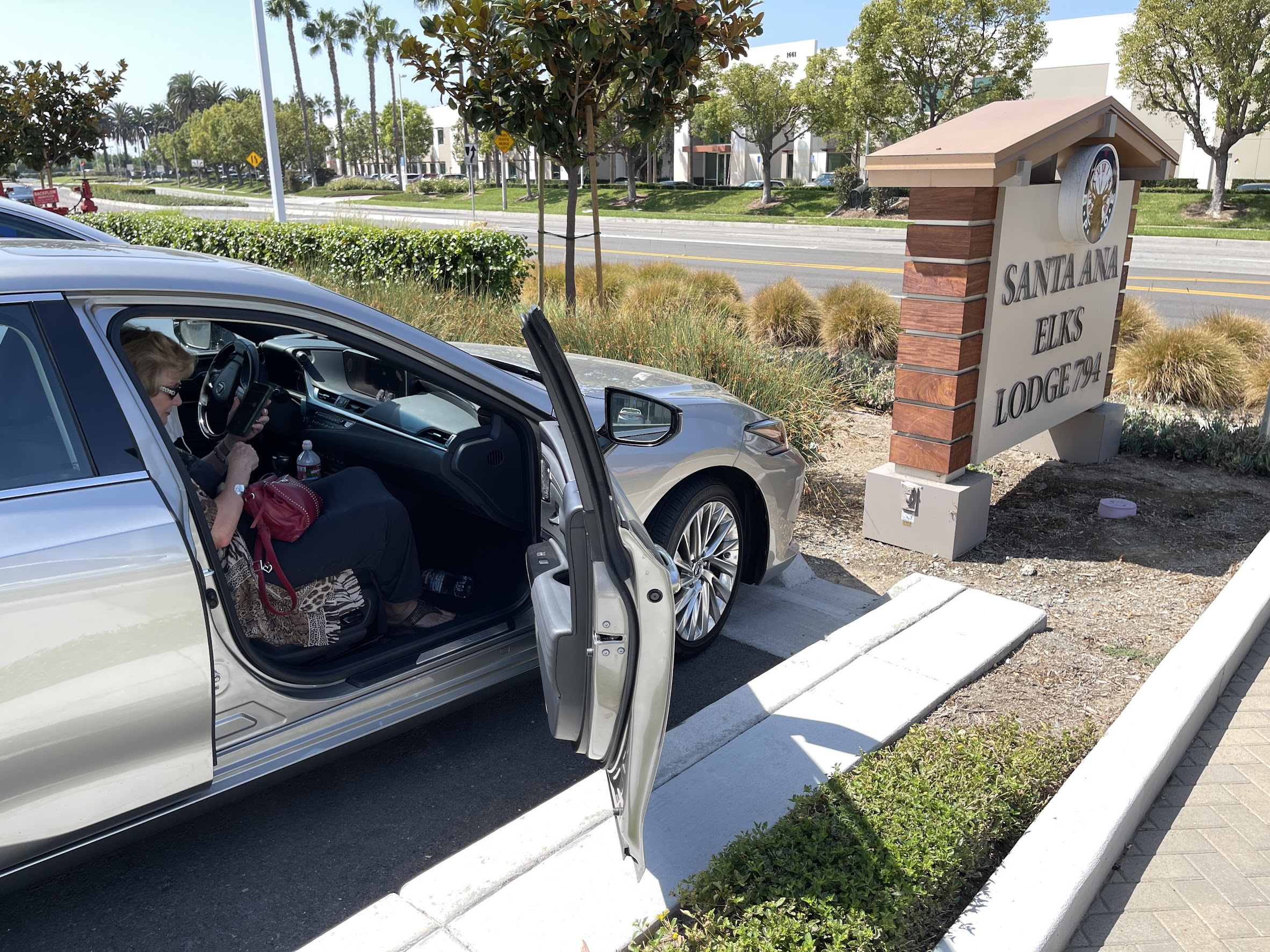 We all visited for an hour and a half.  Teasing is the top priority, and clean jokes a close second! It was good to Mike again!  Bob Z is floating down the Danube for another two weeks. 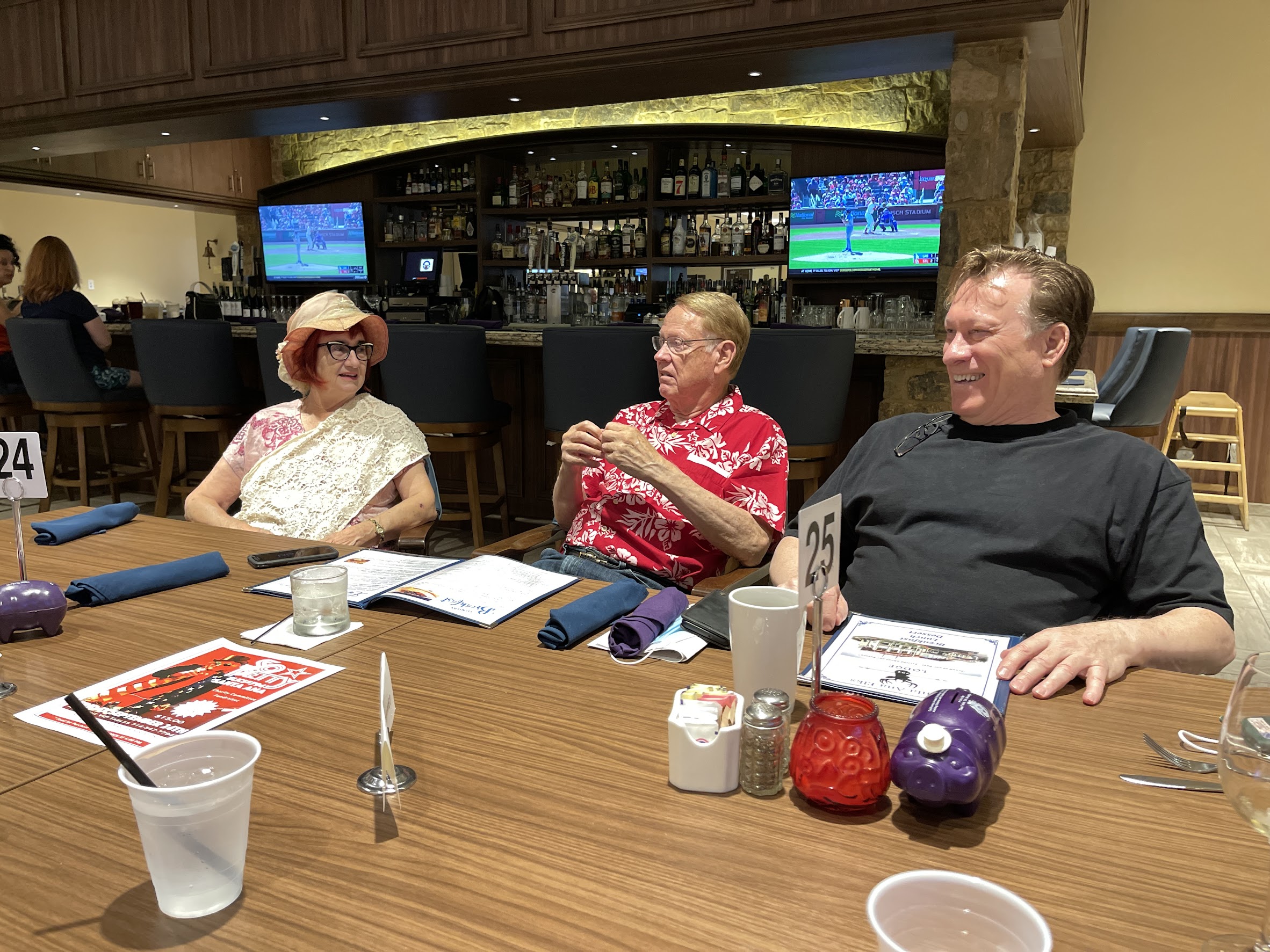 Mike Ash was on a roll this afternoon!  All had great fun!  I sent dessert home with George for Beverly and I must call her and tell he it was “my fault”. 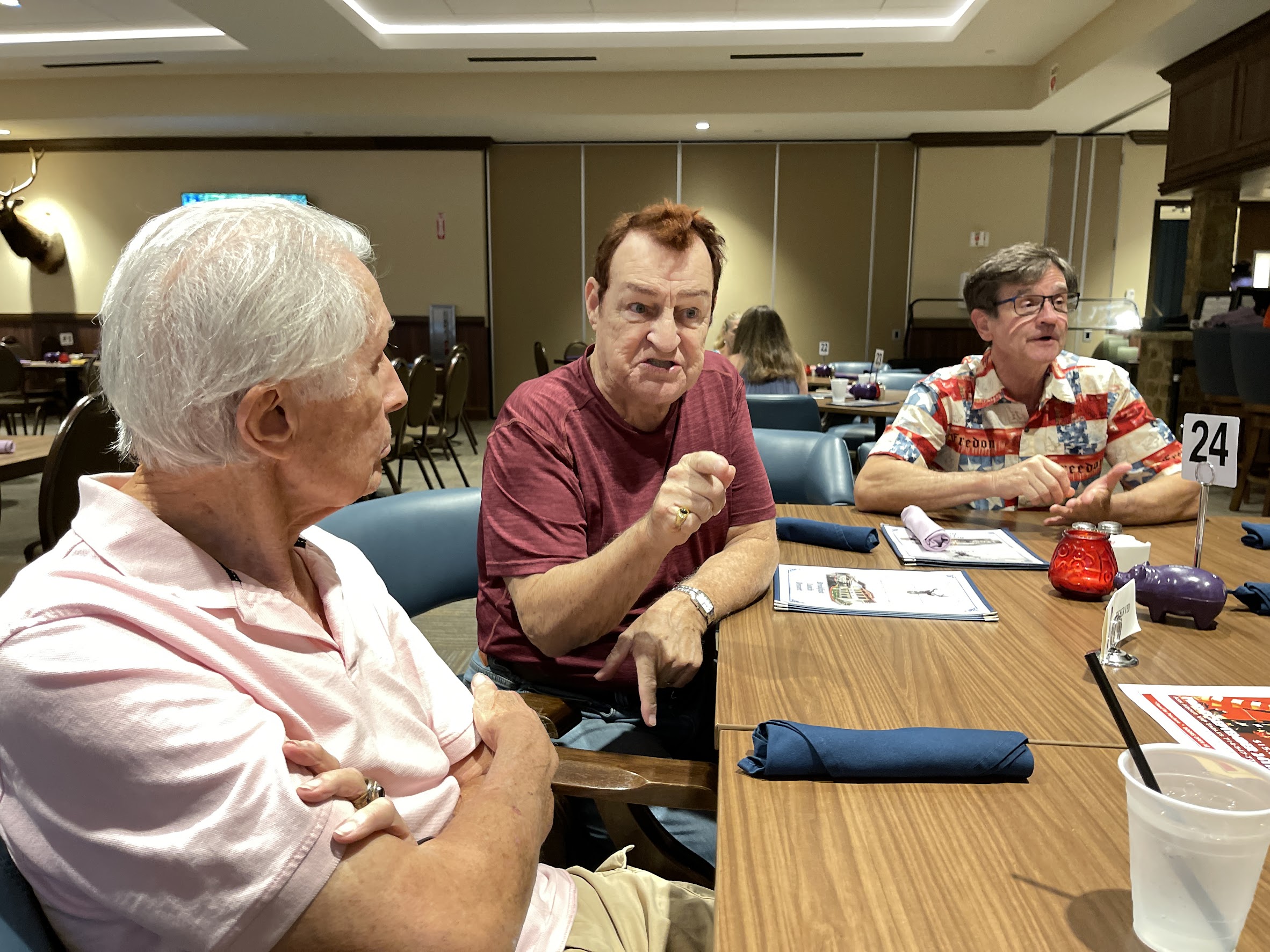 George, Mike, and Will

We left about 1:30 PM and went to The Container Store as I needed a set of rollers for a container that would be used for Mary’s knitting/sewing activities.  I had looked all morning for the set I had kept for years, but alas, they were gone.  I got home, put them on, and when I turned the basket upside down, guess what fell out…yes, the rollers/casters I had been looking for; dang, I hate when that happens!  As I always say, “It’s not the fall that kills you. It’s the sudden stop at the end.”

At 6:00 PM, Mary departed for an Ophthalmology meeting in Irvine, adding to her necessary 50 hours of medical training every year.  I stayed behind and attacked my closets! I made a hundred trips between three closets where I store my goodies.  I now have all the dress clothes, jeans, casuals pants, dress shirts, suits, and tuxes together.

Mary returned home about 9:00 PM and had a glass of wine before crashing; she must work tomorrow!

Well, about 11:00 PM, I was awakened by thunder, and for almost an hour, we were pounded with lightning and thunder.  Five Miles went wild, so he jumped in bed with us!  It was so intense that we called Jan M. to make sure she was OK. I reminded Mary, “They say marriages are made in Heaven. But so is thunder and lightning.” 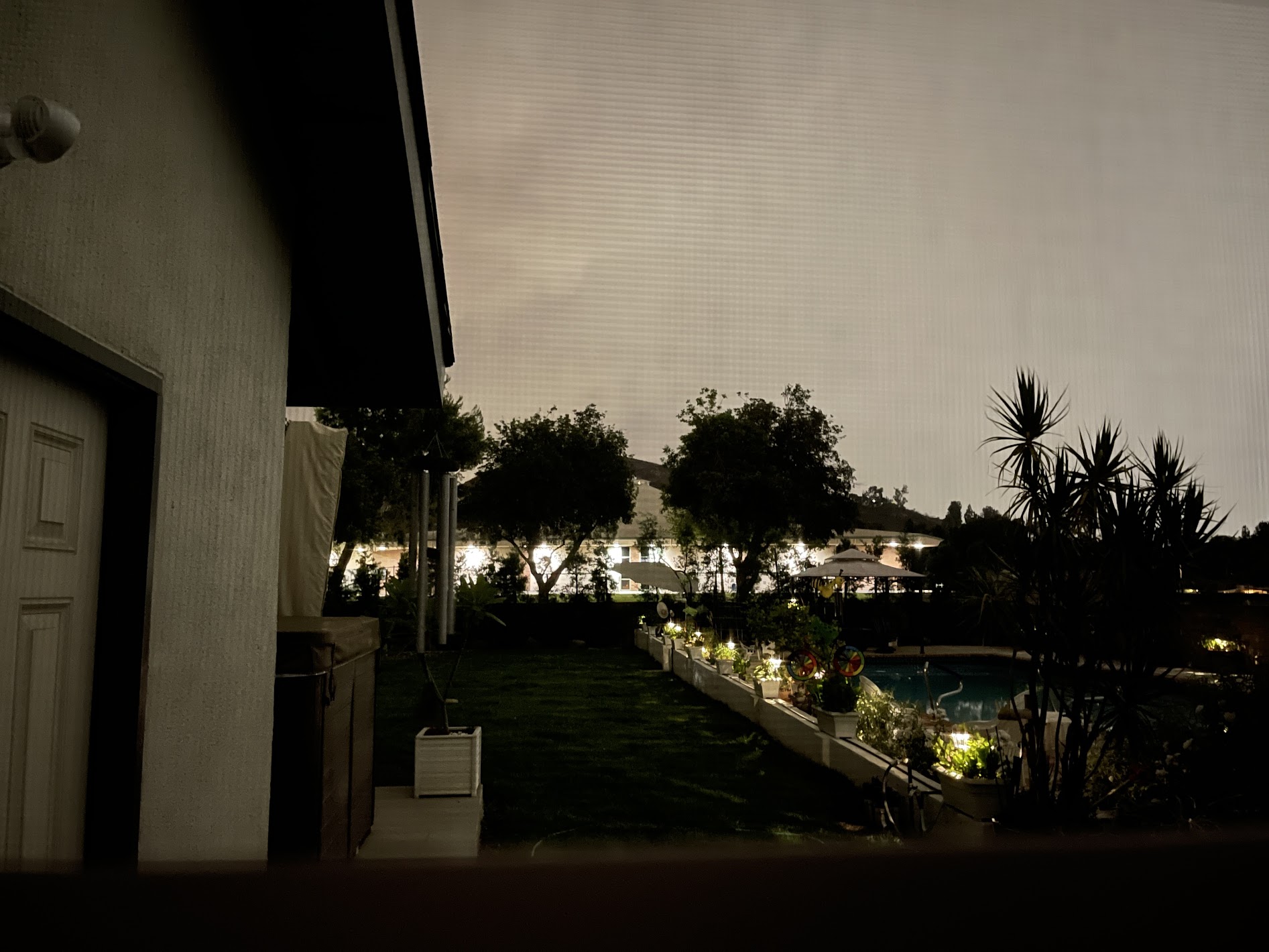 Shot out the bedroom window!

Same shot as above, only a second later; it took about 100 shots to capture the strike! The strike behind the clouds, but it lit up the yard like daytime! 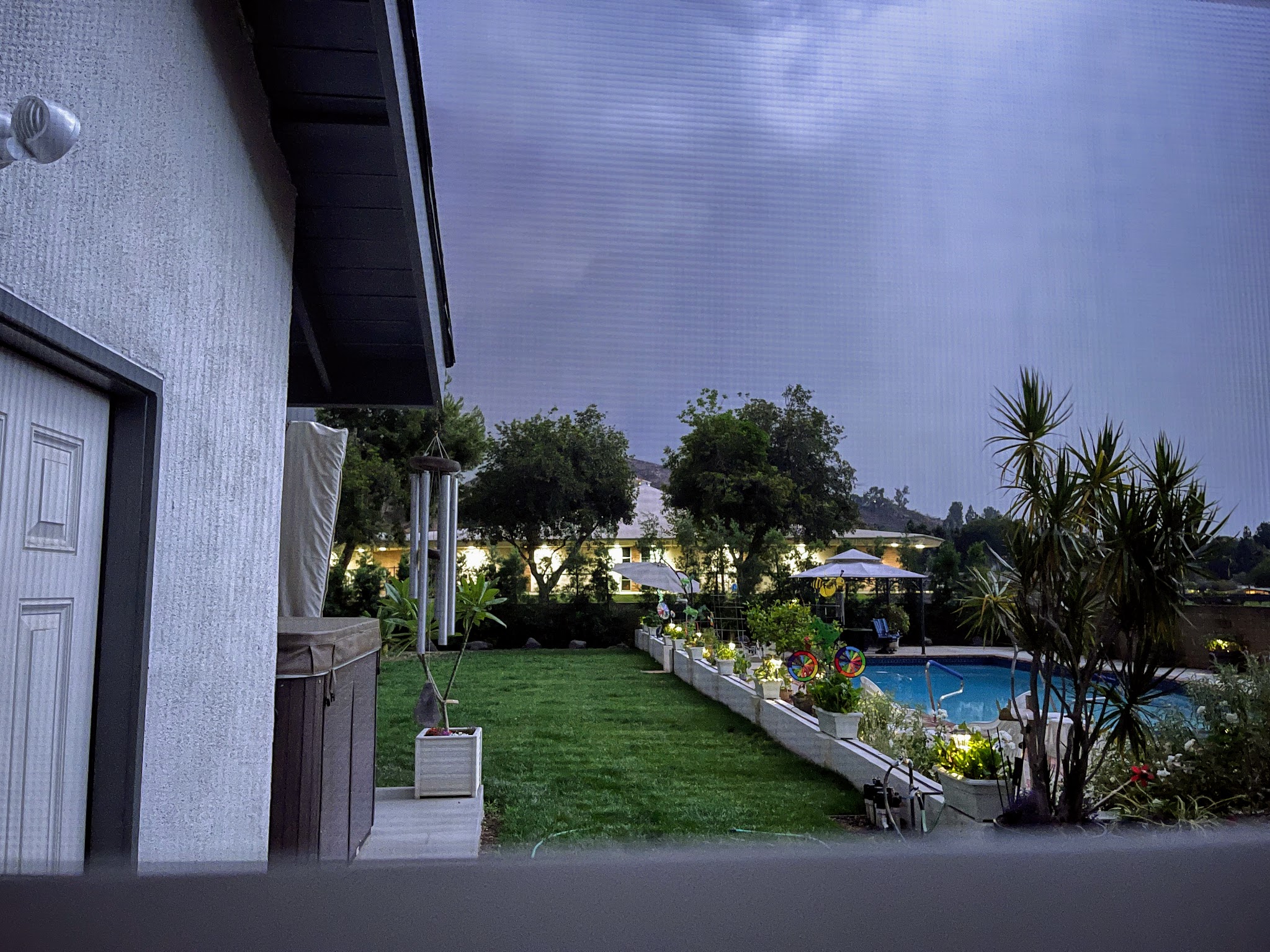 Yard just after a strike!

It got so close that I decided to step back from the window!  It reminded me of my golf buddy’s quote, “If you are caught on a golf course during a storm and are afraid of lightning, hold up a 1-iron. Not even God can hit a 1-iron.” 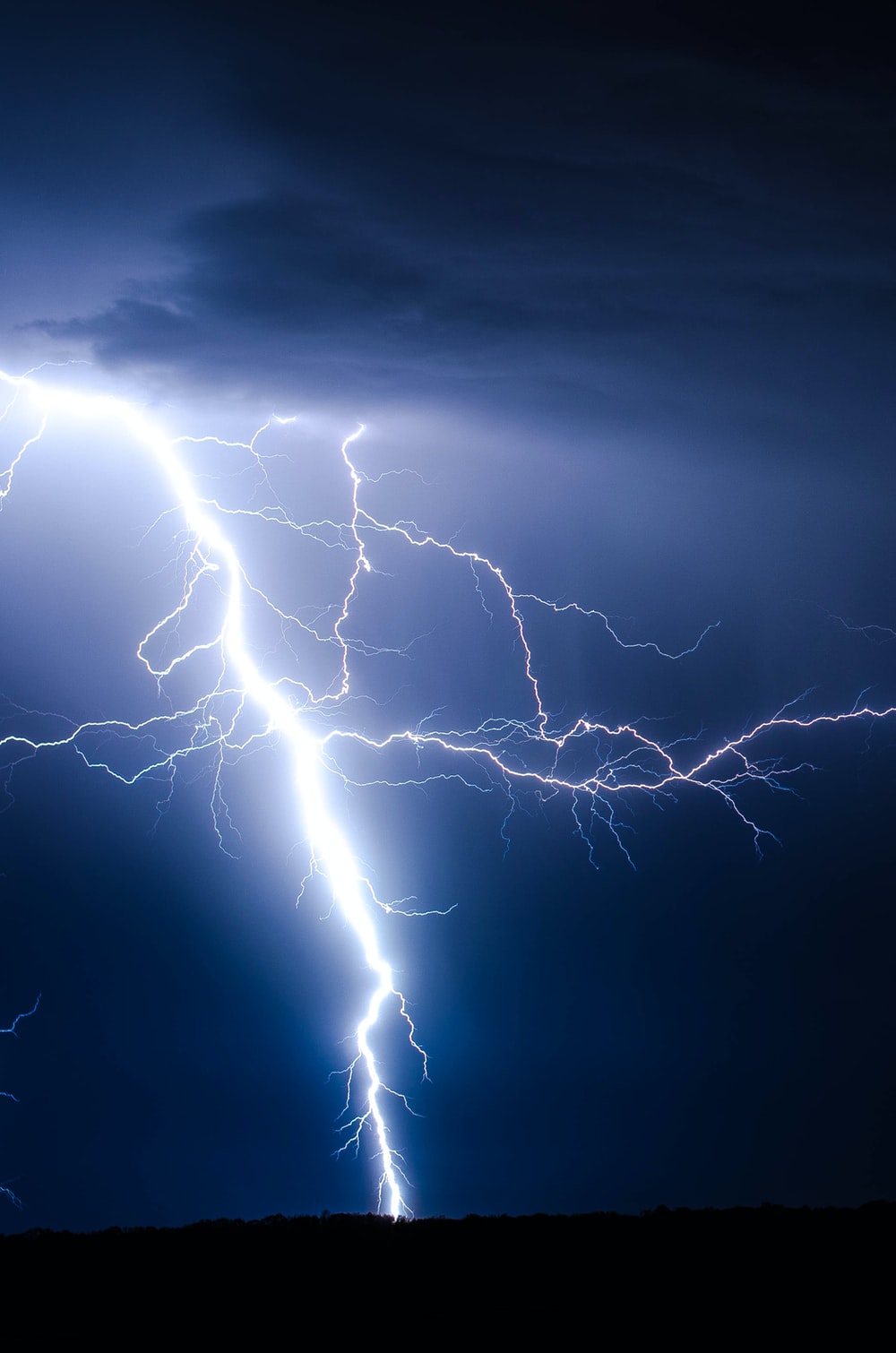 The iPhone worked well, but this was a by-chance shot!

My iPhone went off, and it asked me to open the lightning strike app, which I did.  We could follow the storm in Tustin as it went down the 55 freeway and over Villa Park, just a mile from our place. 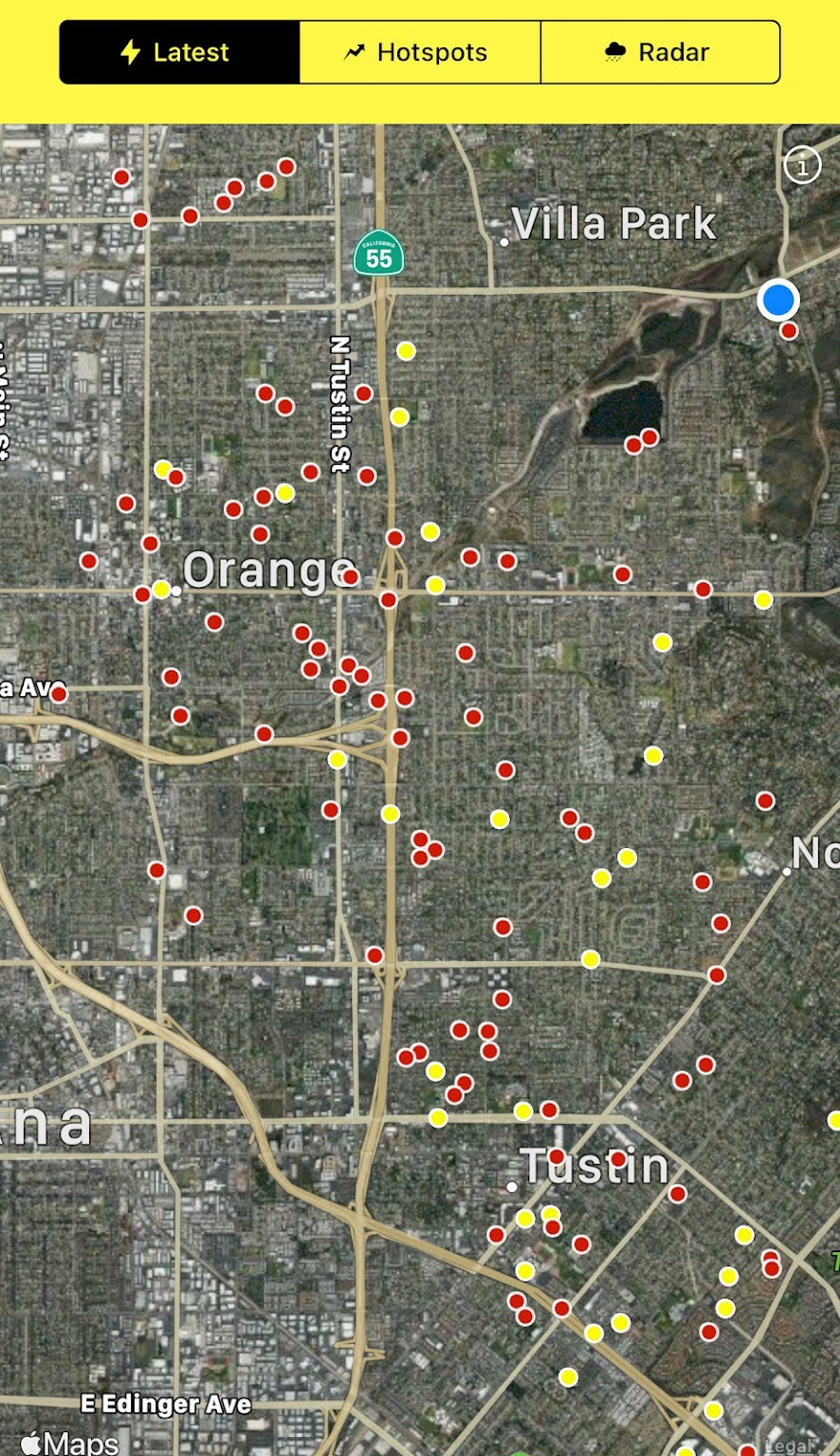 The dots are strikes (The blue dot is us)

Five Miles (Scout) jumped into bed with us, and we soothed him for a good 45 minutes. It was the thunder that worried him; he did not seem to be bothered with the lightning. 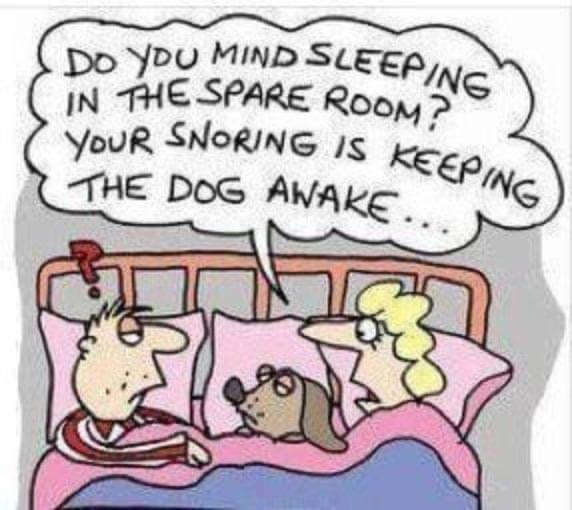 I had to ask Mary, “Ever wonder what the speed of lightning would be if it didn’t zigzag?”  After the storm passed, about 2:00 AM, Scout and I went to the kitchen, and I let him out; he was ready to go! 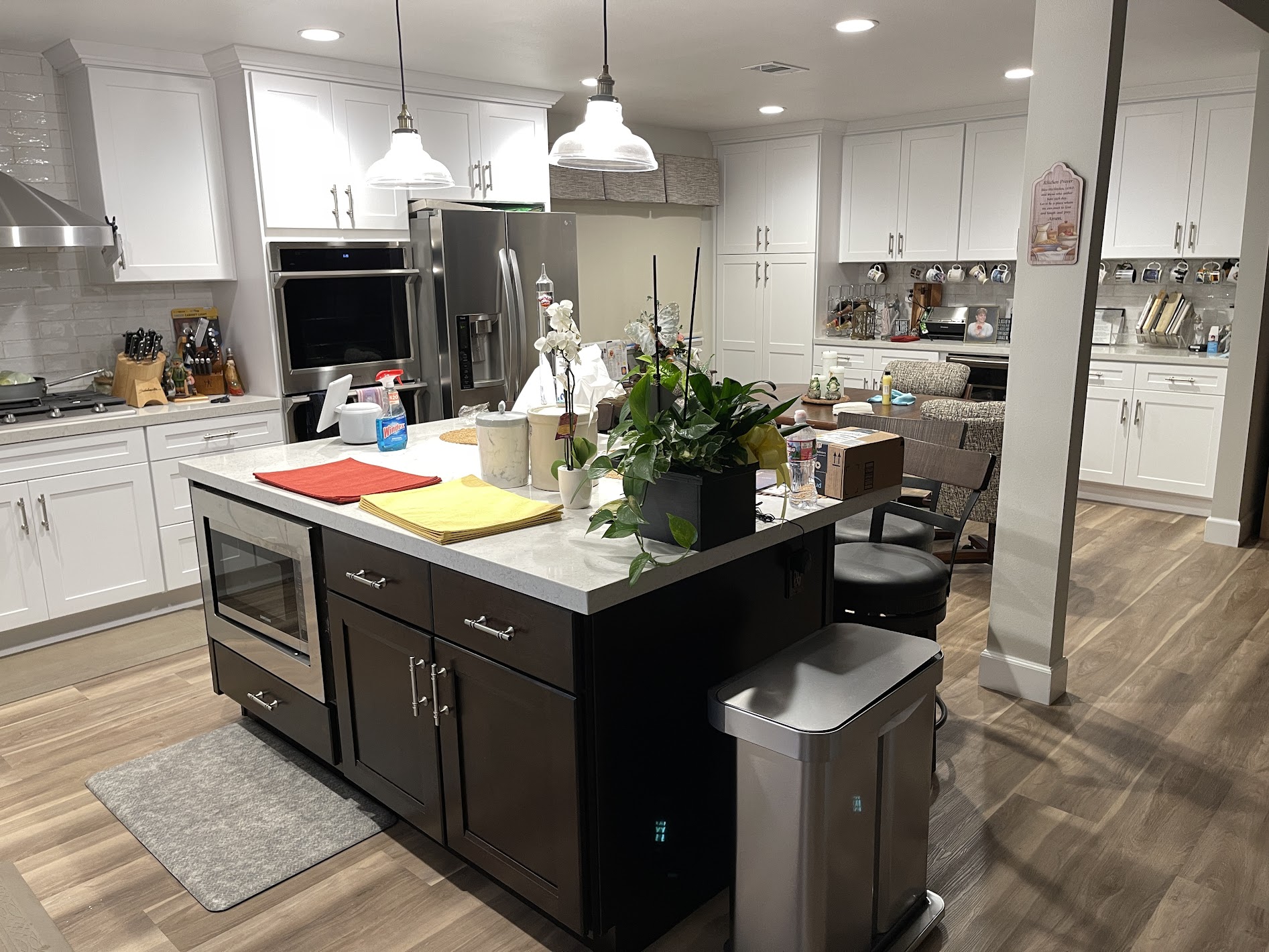 We walked into the kitchen, but Scout was not ready to go outside just yet!

The beating stopped at midnight but restarted about 1:00 AM for a while!

Just an old retired guy trying to finish out my last years on this planet. I lost my best friend and wife in early 2020. I am involved seriously with a long-time friend, Mary, and life goes on.
View all posts by Paul →
This entry was posted in Working Around House. Bookmark the permalink.