“Say not in grief ‘she is no more’ but live in thankfulness that she was.” – Hebrew proverb

Another tradition was the “Water Taxi.”  Every year we would travel to Long Beach, via the water taxi, from Malarkey’s to Rainbow Harbor.  We would take the trip several times during the summer and often take people with us.  At Rainbow Harbor, we would make our way to George’s Greek Cafe, about a mile up Pine Street, where Sue would have a fantastic meal because many of the Greek dishes were vegetarian.

Sue loved the water as we would travel to Catalina several times a year just to have lunch or dinner and return.  Did you know she had a sailboat for quite a while, and the commander of the Navy Ship Yard in Long Beach taught her how to sail?

My beloved bride was a fantastic person in every aspect of life and brought so much happiness to so many people.  I love you, Sue! 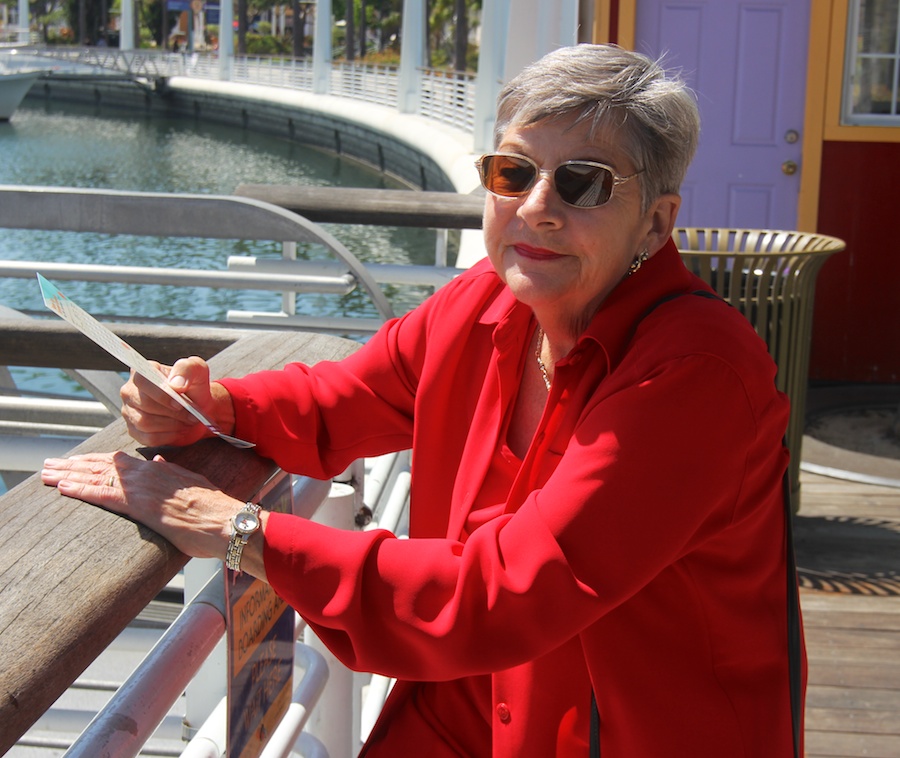 Bob came today and is continuing to work on the drain.  The previous remodel was such that the drain pipe was put into the footing (foundation), so we are having to be careful in replumbing it.  The plumbing was a real surprise to both of us!  The jackhammer was running again so I decided the garden would be a good place to be this fine day.

While Bob worked inside, your friendly vegetable farmer worked outside.  My walkways were getting overgrown, so I had to do some severe staking and trimming to the tune of two 90 gallon trash cans filled to the top! 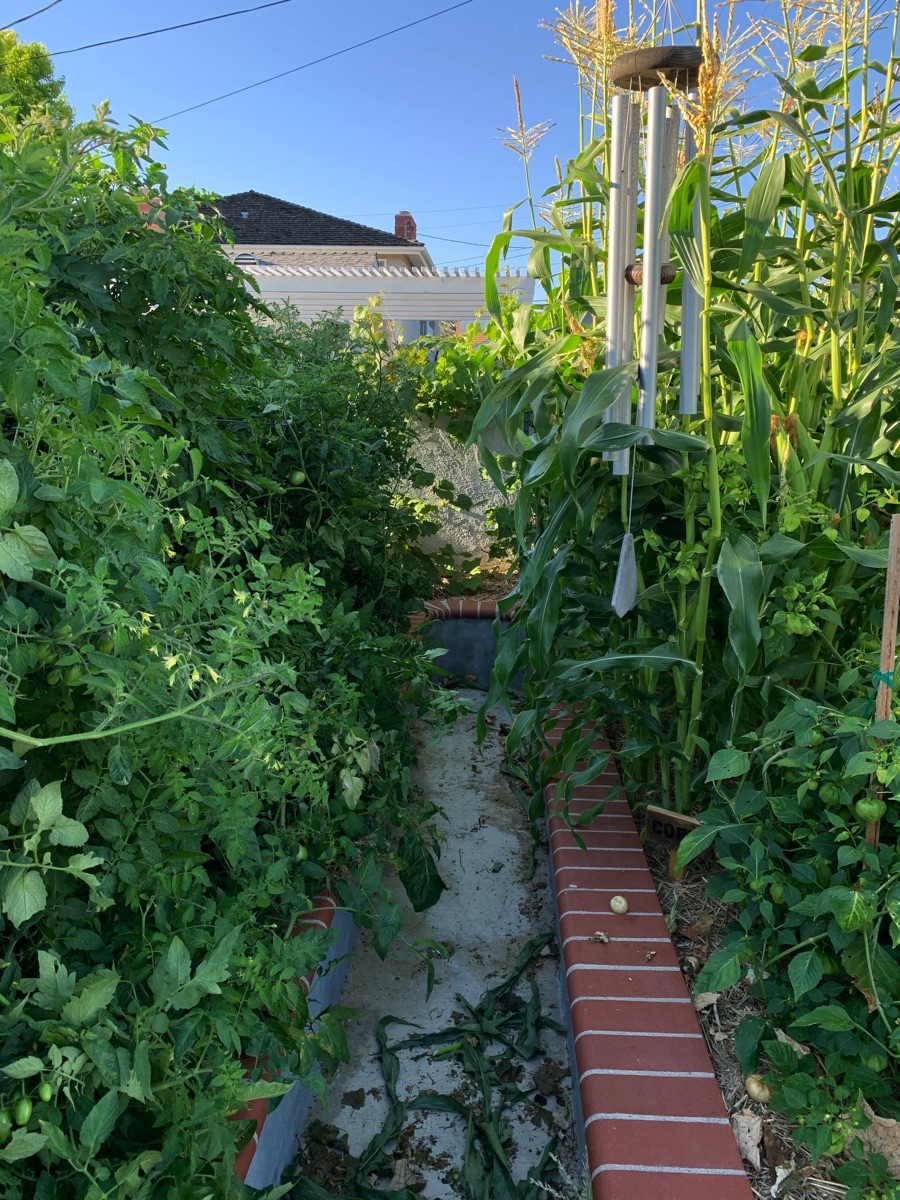 It’s a jungle out there!

I had corn to plant, so I took out the sunflowers and the green beans, after harvesting them, and placed another 5×8 (40) plants in that area.   I had another 40 corn plants leftover, and I think I will put them against the back wall between two tomato plants tomorrow. 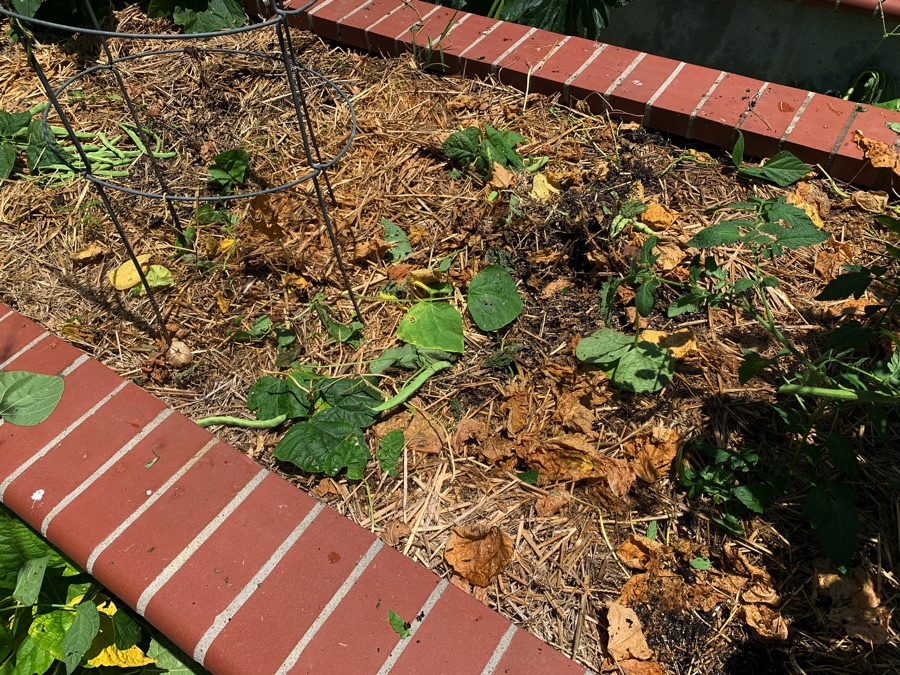 This spot is where the corn will go after I clean up the string beans and sunflowers meaning root removal, turn the soil, add fertilizers, and rearrange the mulch.

I got hungry and went to the corn and picked an ear, shucked him, and ate him on the spot!  Dang, it was good.

If you’re still wondering if you can eat corn raw, the answer is yes, you can—and you probably should. Eating raw corn is healthy, tasty, and completely risk-free. Just make sure to source the freshest possible corn and clean it thoroughly before you munch it straight from the cob. 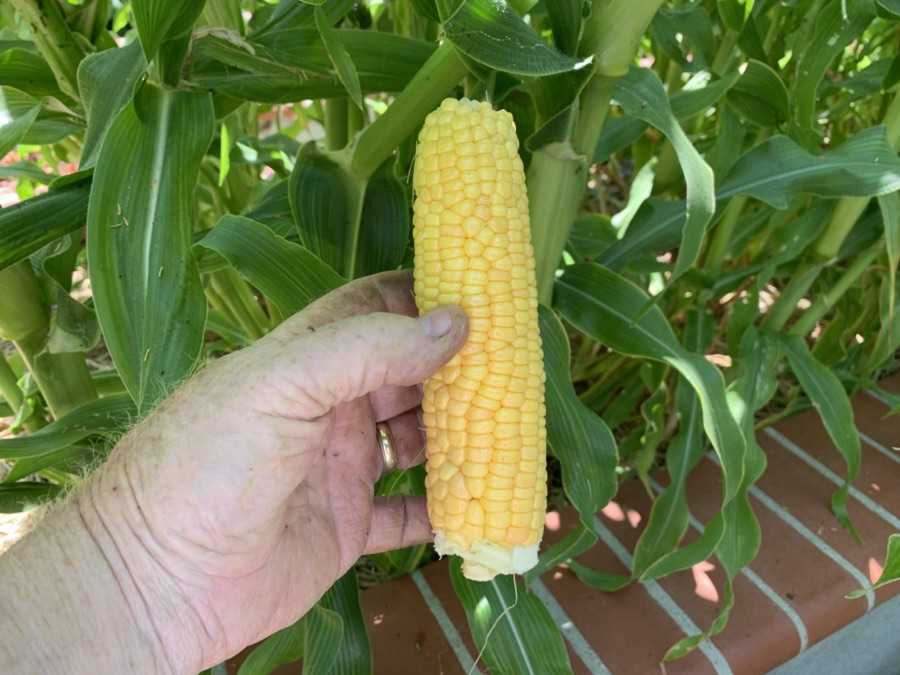 Dining on corn on the cob, no cooking needed!

Most everybody has heard about my “corn sex talk,” so I thought this picture would be a good demonstration. What you see below is a corn cob where the boy part of the corn never entirely made it to some of the silk that came out of the husk, so were the pollen hit the silk, the corn kernels look pretty good. Where the pollen did not make it to the silk, you can see that the kernels are underdeveloped and in some cases didn’t even start to grow.

Each strand of silk on an ear of corn represents a kernel of corn.  A corn plant produces corn silk surrounding each ear about two months after the plant emerges from the ground. Under favorable conditions, pollen grain remains viable for only 18-24 hours. However, the pollen grain starts the growth of the pollen tube down the silk channel within minutes of coming in contact with a silk tube, and the pollen tube grows the length of the silk and enters the female flower (ovule) in 12-28 hours. 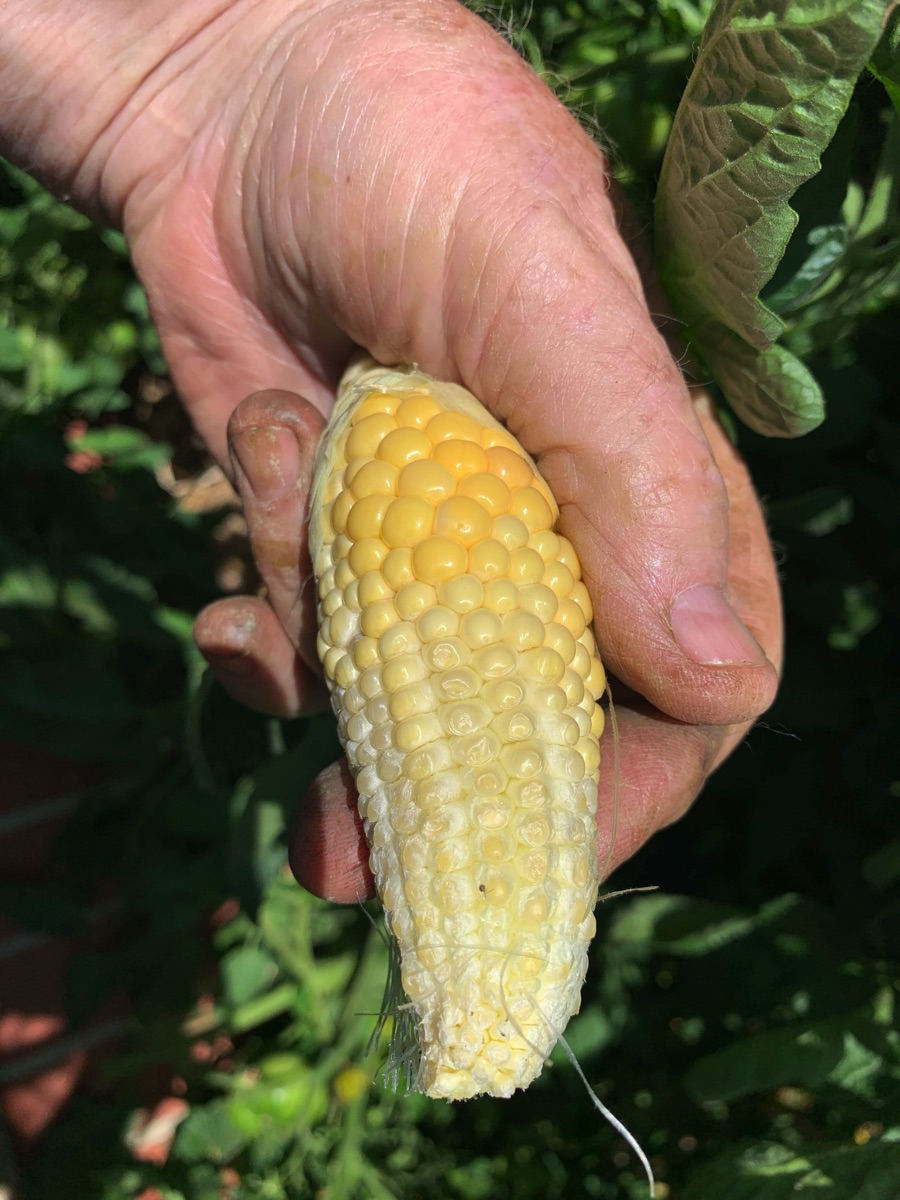 What happens when the boys don’t meet the girls.

I also spotted some ripe aroma tomatoes so I picked about twenty and headed into the house and made a snack.  Roasted Roma’s with hot spicey fixins’. 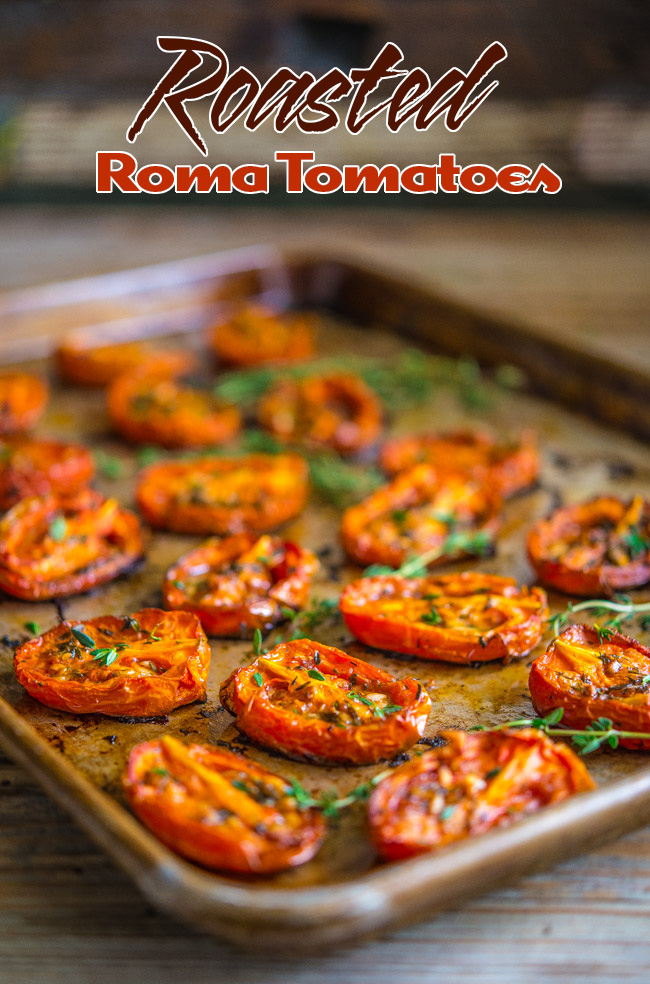 OMG, so good and almost calorie-free!

The little critters below will be for lunch tomorrow! Snap beans, green beans, or string beans… no matter which name you prefer, they are the same and in season! Green snap beans are categorized into two different groups, bush or pole beans, based on growth characteristics.  They should also snap when broken to indicate the turgor* and freshness of the bean.

* Turgor pressure is the force within the cell that pushes the plasma membrane against the cell wall. It is also called hydrostatic pressure, and defined as the pressure measured by a fluid, measured at a certain point within itself when at equilibrium. 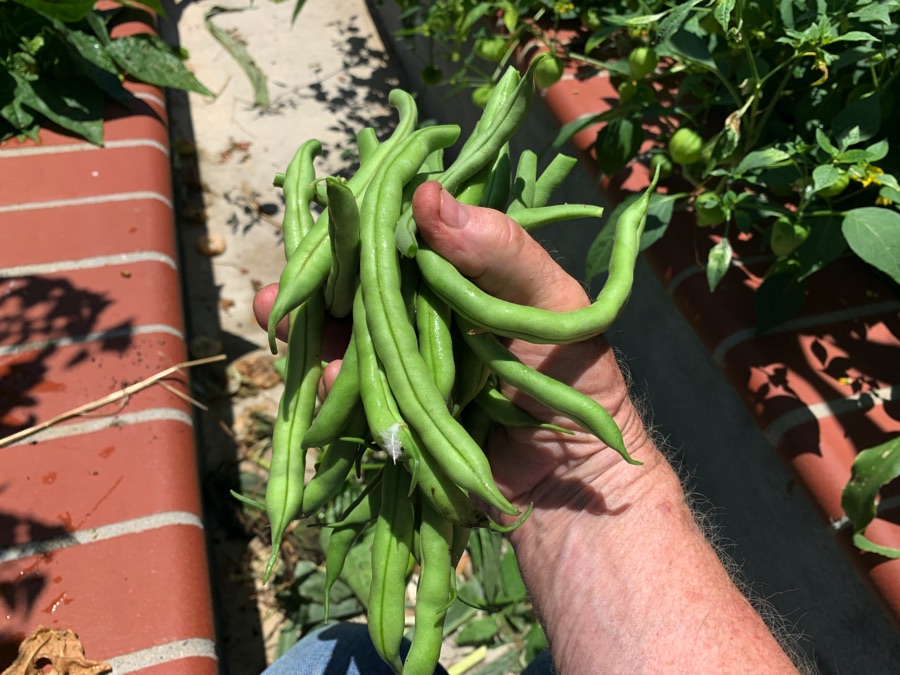 Bush beans are quite prolific.

The corn is in the ground, fertilized, and ready to begin to grow, and in 80 days, we will have fresh corn again! 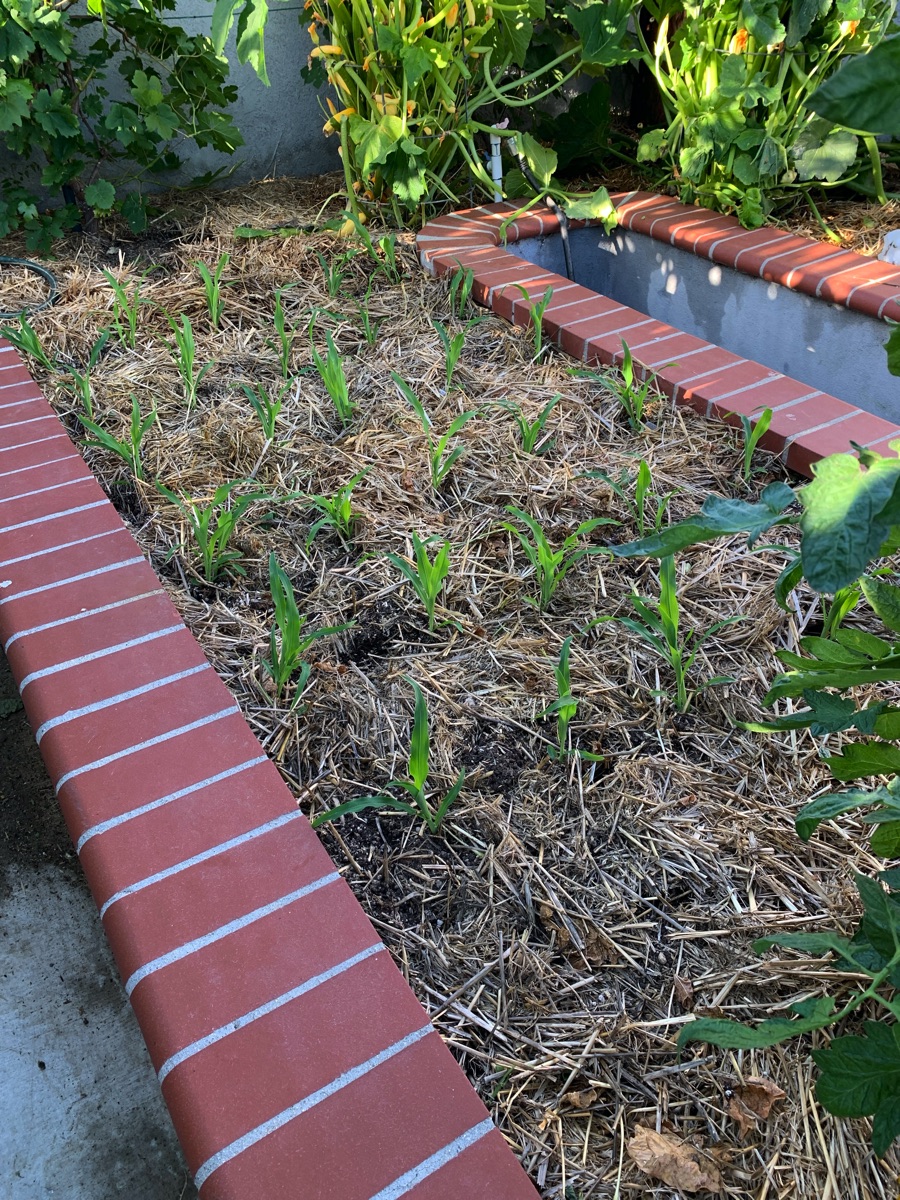 The same bed ass in the picture above but after it was freshened up and planted with new corn plants.

Connor and his lady, Kerrick,  joined me for lunch at about 2:00 PM.  We went to CPK, and I went off my diet, having Jambalaya and a G&T.  Dang, it was so good.  We sat and talked for almost two hours, and the place was not busy at all, which was quite a surprise to me. Kerrick has gone back to school to become a Veterinarian’s Aid and she was encouraged to do so by Connor.  These two have been together for three years now and seem to have a plan for the future.

After returning home, I again headed to the back east-forty to continue my farming duties. Now it was time for the grapes to receive my wrath (a little play on words there).  It is important to make sure the grapes see the sun to prevent mildew from forming on the skins as we are so close to the water.  I rearranged and trimmed all seven plants along the northern wall. 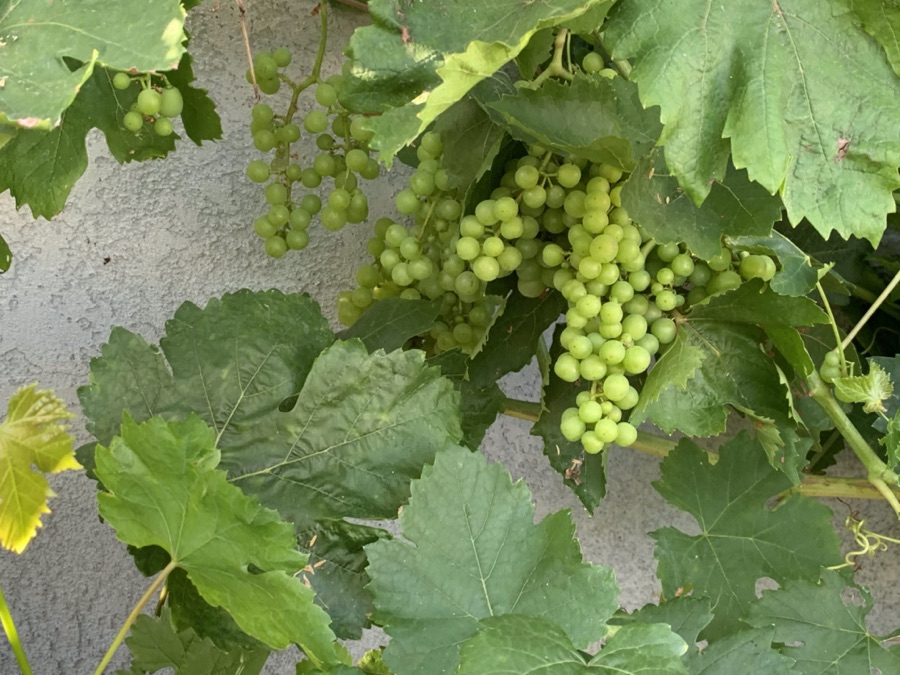 What must I do with my grapes, you ask, watch the video!

The last thing I did was to harvest my potatoes.  I have a whole bunch of potato plants all around the garden. The ones below will be perfect for the small meals I fix for myself. These will last a good two weeks or more.  If I don’t get them eaten in enough time, I will simply take them out of the box, bury them in the ground about 4 to 6 inches deep, and wait for another crop of potatoes to show up. 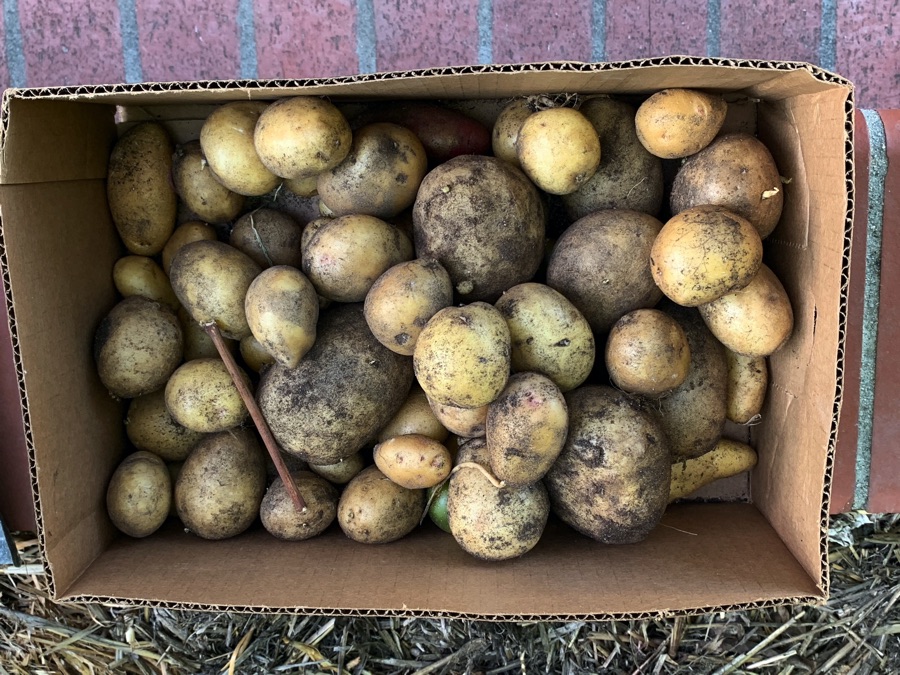 I have been digging in the dirt.

OK, I am officially pooped!  It is almost 7:00 PM, so I called Colleen to check-in.  She was at the drive-thru baby shower for Jackie earlier in the day.  The city police came by tooting the horn and sirens, and everybody dropped off gifts but stayed their distance. 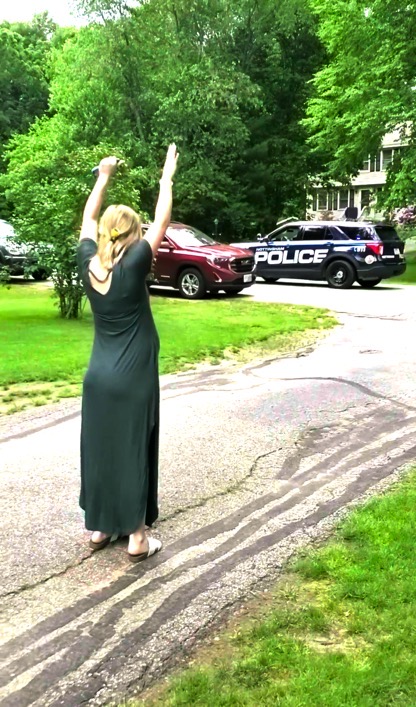 Into the shower, I went and making sure I didn’t leave a “ring-around-the-shower” as I was pretty grimy.  Just as I got out of the shower, Robin called for the evening check-in and coordination effort for this week’s visit.

I watched Haven and then did the daily diary after talking to Jan M.

Since I did not “walk” today, I checked my pedometer and I had 5,427 steps at 1.9 miles using 142 calories so, that means, tomorrow morning I walk for real.

It is 10:13 PM, and I heard something outside my sliding glass door.  Being alone, it was a little disturbing, but then I remembered I have an apple tree with fruit on it.  So, I grabbed the big flashlight, carefully slithered out the door, and a Racoon, the size of a baby elephant, took off through the tree, onto the ground, and lept onto the fence, and disappeared into the neighbor’s yard.  I am sure he waved bye-bye as he said, “I’ll be back again someday!”  Frosty the Racoon perhaps?

Good night all! Just a little comic to leave you with a giggle!

Just an old retired guy trying to finish out my last years on this planet loving my best friend and wife, having fun, learning, and passing on helpful things to others.
View all posts by Paul →
This entry was posted in Dining Out, Family, Gardening, Working Around House. Bookmark the permalink.